The sky has been full of newsworthy events lately. Billionaires like Branson and Bezos have had their own space race going on to launch their companies for tourism and hauling payloads into sub-orbit, while Elon Musk’s SpaceX has been sending rockets back and forth since 2000. NASA also has been pulling off missions that were once unthinkable, like landing a rover on Mars and even flying a helicopter above the red planet’s surface.

But you don’t need to be a billionaire to appreciate how amazing it is above us all the time, and there’s way more than just human activity going on in the thermosphere and beyond. The Perseid meteor shower, for example, recently lit up the night sky, leaving streaks of shooting stars as Earth passed through the debris tail of Comet Swift-Tuttle, plus a rare blue moon rose for the last time until 2024.

And these are just what can be viewed with our eyes alone — there’s a whole lot more going on than what we can see, and for that you’ll need a good telescope. As a general rule, if you’re just getting started in astronomy (or giving a telescope as a gift, especially to kids), it may be tempting to go all-out and get the most powerfully expensive scope – but keep it basic until you know this is going to be a hobby you’ll be hooked on for years, if not for life.

What Are the Best Beginner Telescopes?

Here’s what to look for in a telescope before starting your stargazing journey through the universe.

Aperture: This is the diameter of the telescope, measured in millimeters, and they can vary pretty widely. But it’s important since aperture is where the real power of a telescope is – the larger the aperture, the more light it’s going to let in, the more resolution and brighter view you’ll get.

Eyepiece/Lens: As the name says, this is where you’ll look through to see your celestial target. Many scopes come with multiple eyepieces though that offer different magnification options, and having a Barlow lens included can triple the power of each.

Portability: You’ll want to be able to close this up, lift it, load it into a car, and set it up again at optimal viewing points whenever there’s a big astronomical event, so make sure it’s something you’re realistically able to carry.

Design: There are a few different design designs to know when looking for beginner telescopes. A refractor design uses a glass lens, beaming down to the diagonal mirror or prism in the “elbow” angle and up into the eyepiece. The result is often clear, sharp and bright. These are excellent for activities like viewing planets and the surface of the moon, but also double for daytime viewing, such as spotting ships on the horizon or wildlife on distant mountains (just make sure it doesn’t display them upside-down). They’re also pretty low maintenance and ideal for beginners.

Contrast that with a reflector telescope, which are measured in inches instead of millimeters, and take in tons of light. These have a secondary mirror inside that incoming light bounces off of after the primary mirror, and then to the eyepiece on the side. You’ll see more with these, as things like galaxies and nebulas become visible, as well as greater detail on planets. They do require some occasional maintenance to align all the components, called colimation, and might be better for users with some experience already.

A third type, Cassegrain, is a fraction of the size and best for travel, as the entire until can easily fit inside a backpack.

Mount: Even with a great telescope, a good mount is necessary to get the most out of it. The mount is what the telescope sits on, and allows it to pivot and swivel. If you’re trying to stay focused on something in the night sky, you’ll need to move your telescope to follow it, and a steady but moveable mount makes that much simpler. The Altazimuth mounts (or AZ) move a basic up-down-left-right, while an Equatorial mount is designed to follow the Earth’s rotation and lock onto an object’s path. A computerized and motorized GoTo system that can auto-find anything you enter is also available, but more expensive, and requires alignment before use every time.

Cost: Good telescopes aren’t cheap, but you also won’t need to wipe out your bank account just to get one. For a complete beginner, it’s recommended to start out slow with an affordable model, then upgrade if you find yourself diving deeper. However don’t be tempted by a too cheap telescope, as these often can’t measure up and require a lot more work and maintenance that is avoidable on better models.

Celestron has been crafting quality telescopes and equipment for nearly 60 years, and this one brings amateur astronomy into the smartphone era.

The StarSense is designed to flawlessly integrate with your device via the company’s StarSense Explorer App, analyzing constellations and star patters visible in your area, recalibrating and displaying them in real-time. Just follow the on-screen arrows to your intended target, and take a look when the bullseye turns green. You won’t need WiFi or even a cell signal to use it, which makes it a top choice for taking to spots off-grid. The app has a night-vision mode too, turning the screen red to keep your eyes adjusted to dark surroundings.

Its 130mm objective lens lets in enough light to clearly view stars and planets, all with reliable accuracy. There are also two eyepieces included: a 25mm that provides 26x and a 10mm that provides 65x.

It’s a seriously excellent option for anyone looking to explore the universe without the high-maintenance setup and finicky adjustments of other scopes. 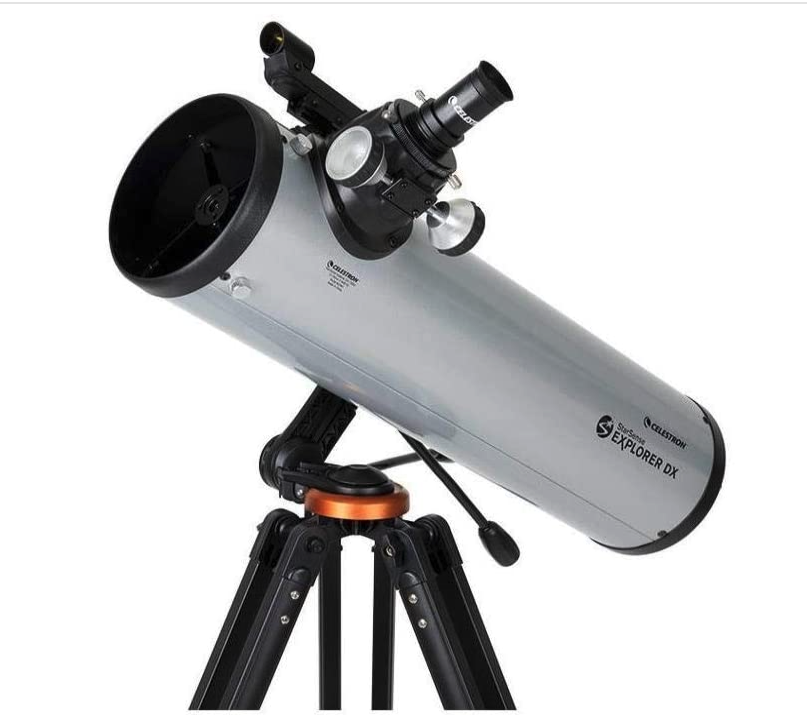 Both kids and adult novices and newbies can enjoy this, taking their first steps into astronomy and the universe by viewing the moon, planets, and stars. The scope sits on an Altazimuth-type mount that features slow motion controls rods to make sure you stay on target when tracking an object through the sky.

At 11 pounds, it’s light enough to be carried around to find your perfect viewing spot, and three eyepieces give you multiple magnification options to see details like Saturn’s rings and the moon’s craters. 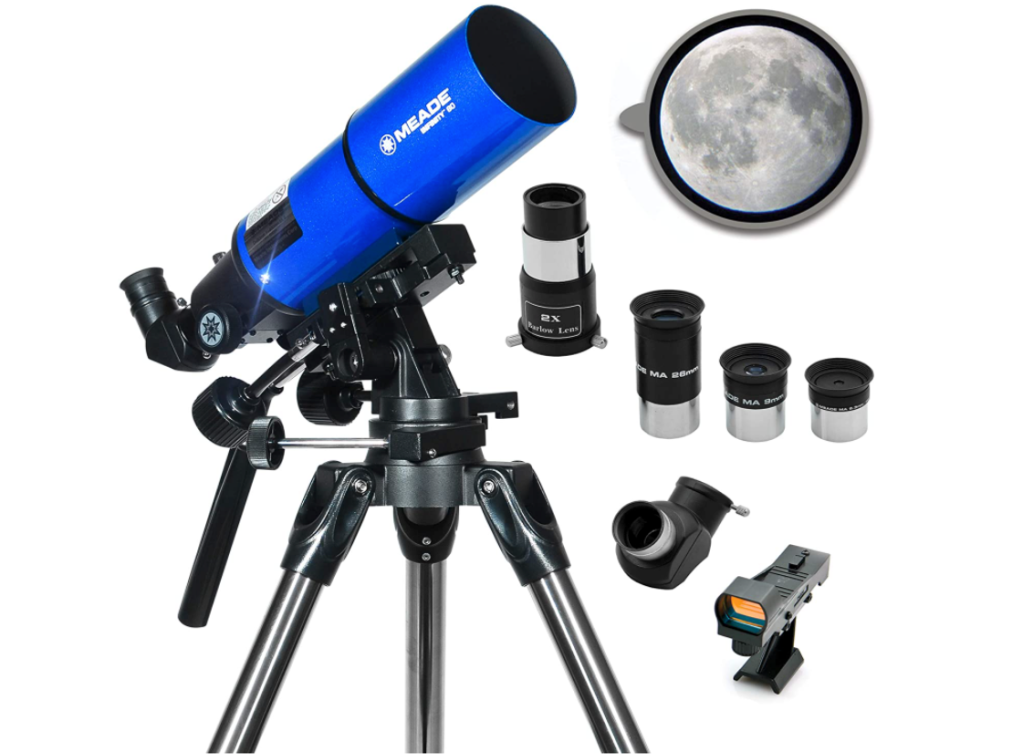 Another stellar option from Celestron, this one features a 127mm aperture. Size-wise, it’s a much more portable option (though it does weigh 28 pounds) and is designed to be taken to rural viewing spots. The scope sits atop a German Equatorial mount, with a designated altitude rod for precise pointing right where you want to observe and track with 50x and 250x magnification.

This integrates with their Starry Night Astronomy Package, and while the StarSense model is best for beginners, this one would fit best for amateurs with a little more experience. 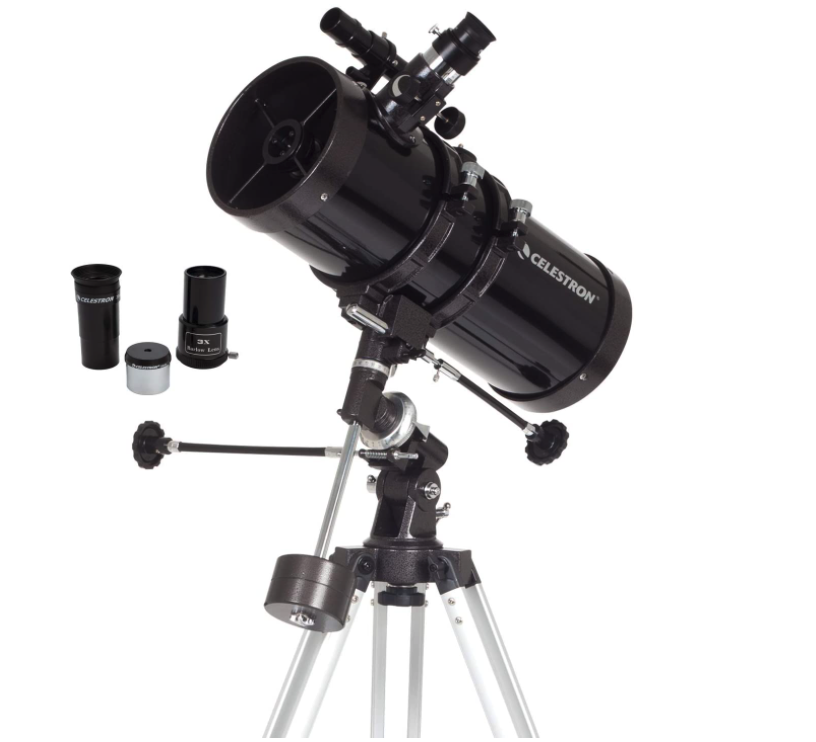 At 5.7 pounds, Gskyer’s refractor telescope is a solid choice for kids and beginners who want to take their exploration on-the-go, finding the best spots to look skyward away from city lights.

With a 70mm aperture/objective lens, observing the moon and planets is fun and simple, and the views come through clear with an easily accessed focus wheel. Assembly is quick, though an adult may have to help get kids started, as celestial targets can take a while to locate. Aside from space, it’s also ideal for looking at (and photographing) wildlife like birds.

This comes with two replaceable eyepieces as well as a finder scope, mounting bracket and tripod, phone holder for integrating apps, carrying bag and wireless remote. 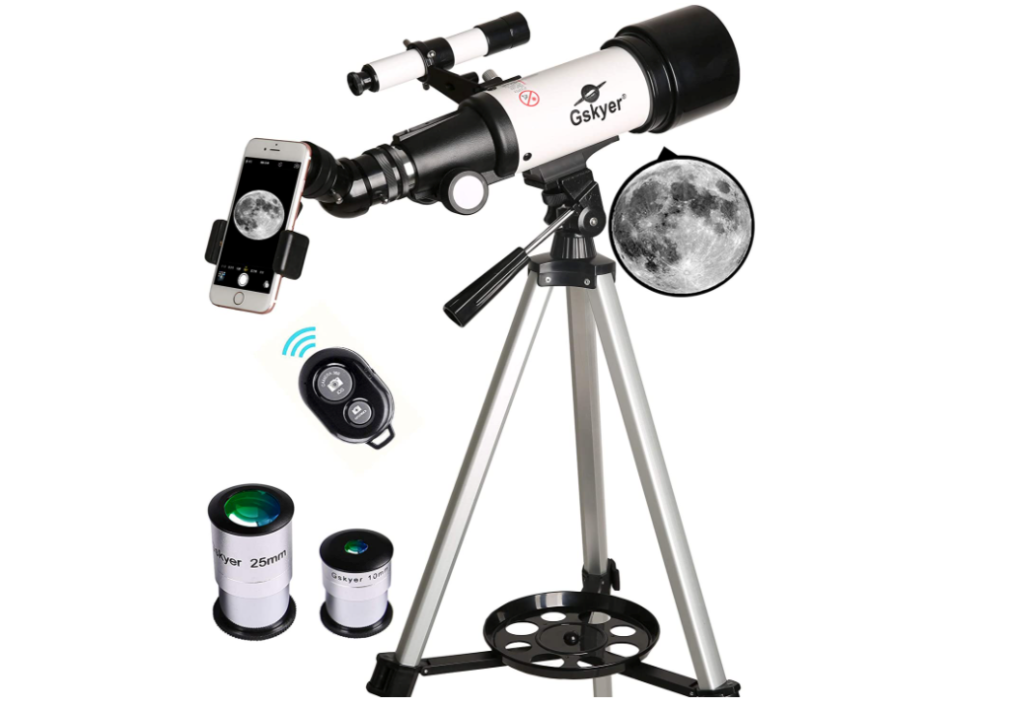