One of the most effective (and easiest) ways to beef up your home’s security system is setting up a few smart cameras. Smart security cameras can catch criminals in the act, and alert you when a potential break-in is in progress.

The downside is that your camera’s position is typically limited by the location of your outlets, both inside and outside of your home. But that’s not always the case, many new smart security cameras are battery powered, which gives you far more freedom when deciding where they go. The batteries inside these cameras are almost always rechargeable, and last for several months.

Some will alert you when they need to be charged by sending a notification to your phone, but you can always set a quarterly reminder to remove, charge, and return them. Although they run on batteries, the smart security cameras below have all the same features as the ones that require a hardwired connection. You don’t sacrifice anything when installing them, you just gain flexibility.

What Are The Best Battery-Powered Security Cameras?

There are many factors to consider when choosing the right battery-powered security camera for you; below are the most important ones, which we considered while we were researching this list.

Resolution: The most important technical spec of any smart security camera is its resolution. The higher the resolution, the clearer the picture. You’ll want the best-looking video possible in case of a break-in, because it’s the piece of evidence you’re going to review, and possibly turn over to the police. All of the cameras on this list capture video in either full HD or better, so you’ll get clear images.

Smart-home integration: All of the battery-powered security cameras allow you to view live footage on your phone via an app (iOS or Android), but many let you use a smart assistant like Amazon’s Alexa or the Google Assistant to view videos on their smart-home hubs.

Durability: Some of the cameras in this guide are designed to be used outdoors, so we made sure our picks could survive the elements. All of them have a high enough IP (ingress protection) score to withstand rain or snow without getting seriously damaged.

Cloud Storage Subscription: All of the battery-powered security cameras we’ve chosen will send your phone a notification when their motion sensor is tripped, but you may need to pay an optional subscription fee to have video clips stored in the cloud. The benefit to paying for a cloud storage subscription is that you’ll have proof of any suspicious activity even if you miss the camera’s notification. 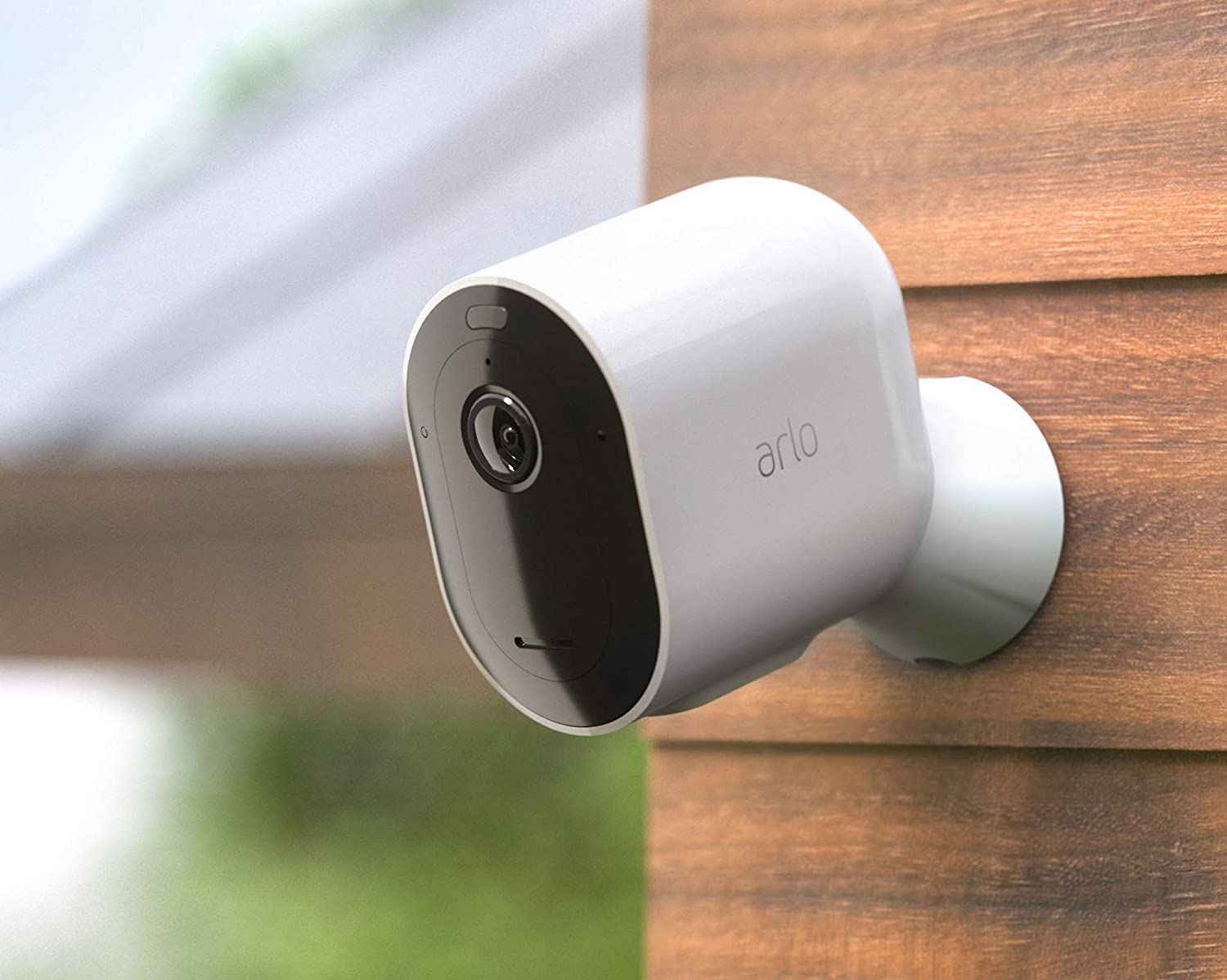 Arlo’s Pro 3 has earned the top spot in our guide because it’s designed for indoor or outdoor use, and takes the highest quality videos.

The cameras (we’re recommending a two-pack to cover the front and back of your home) can record video in 2K (2560 x 1440 pixels), which is a pretty big jump from full HD cameras. It has a built-in spotlight, so its night mode that capture videos in color rather relying exclusively on infrared lights, which produce black and white video. This allows these cameras to pick up crucial details (think color of clothing) that would be lost otherwise.

Arlo says these cameras can last between three and six months per charge, and fully recharge in three and a half hours. You can charge the cameras using a magnetic charging cable, to avoid having to take them down and put them back up.

You can hook up Arlo’s cameras to the Google Assistant or Amazon’s Alexa to view a live video feed on devices like the Echo Show 8 totally hands-free. As always, you can also check on the cameras at any time using Arlo’s app.

The company doesn’t give a lot of details about the durability of these cameras, but does say they have a water-resistant design. The kit we’re recommending comes with a hub, which allows you to save video clips locally, and doubles as a siren that can alert buglers they’ve been caught. Arlo bundles the cameras with three months of free cloud storage, but you’ll need to pay $120 per year for the perk after that.

If you want a comprehensive set of battery-powered security cameras, this two-pack of Arlo’s Pro 3 are the ones to get. 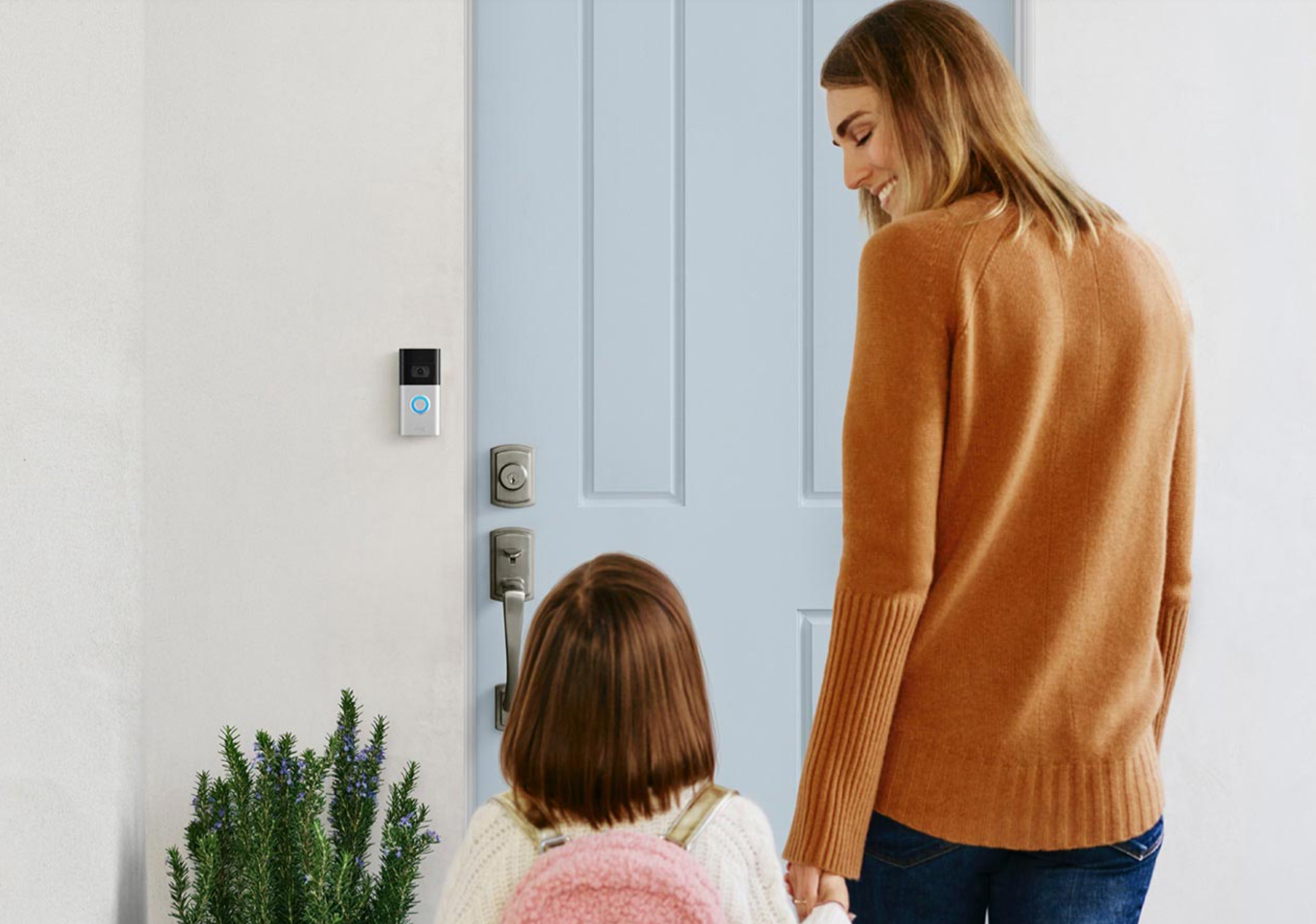 If you want a battery-powered video doorbell, we recommend Ring’s Video Doorbell 3. The latest-generation of the popular security tool can record video in 1080P (full HD), and has a night-mode to catch would-be thieves even if they attempt a break-in after dark. The Ring Video Doorbell is designed to stay outside, and the company says it’s water resist enough to handle rain.

Ring doesn’t give any estimates about how long the battery in this doorbell will last, but you should expect to charge it every three or four months. You can also buy a second battery to pop in, so there’s no down time while you charge the first one.

The Ring Video Doorbell 3 is compatible with Amazon’s Alexa, so you can check out a live video feed on one of Amazon’s Echo Show devices. You can also communicate with people who come to your door via the doorbell’s built-in microphone and speaker system, which is a nice touch.

You won’t get any free cloud storage when you pick up a Ring Video Doorbell 3, but a Ring Protect plan only costs $3 per month ($30 if you pay for a year), which isn’t too bad.

If you want a battery-powered camera to protect one of the most vulnerable parts of your home, the Ring Video Doorbell 3 is a good choice. 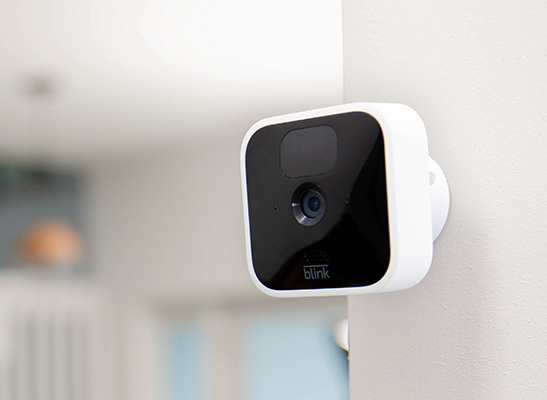 If you’re more concerned about keeping the inside of your home protected, we recommend Blink’s Indoor Wireless Security Camera.

The camera has a maximum resolution of 1080P, and an infrared night mode that’s complemented by temperature monitoring. This means the camera can better determine whether a moving object is living or not. Blink’s camera runs on a pair of AA batteries, which the company says can last for up to two years before needing to be replaced.

You can connect the Blink Camera to an Amazon Alexa account and look at live footage from an Echo Show, or within Blink’s app. You’ll need to pay $3 to store and view video clips taken by the camera on the cloud. You can also opt to store video clips locally on Blink’s Sync Module 2, which will launch shortly.

The Blink Indoor Wireless Security Camera is compact, and well-equipped to keep an eye on your home while you’re away.