Best PC vs. Chromebook 2020: Which Laptop is Best For Students & Work? - Rolling Stone
×

A computer is one of the only gadgets that’s completely necessary to get work done at school and in the workplace. Until recently your only choices were to choose between a desktop and laptop, whether to get a Mac or a PC. Chromebooks — laptops that run an operating system based on Google’s Chrome browser — are a new, third option.

Traditional laptops and Chromebooks share a lot of the same DNA: they’re portable computers, designed to access the internet, consume media, and get work done. That said, they differ in some fundamental ways, like how they handle privacy, what apps they can run, how powerful their hardware is, and the tasks they’re best suited for.

There’s no “wrong” choice, but I’ve broken down the main differences between traditional PCs (ones that run Windows; Macs are a different beast entirely) and Chromebooks below, and recommended one of each once you’ve decided which one fits your needs best.

Both Can Handle Common Tasks, But PCs Are Faster

Raw processing power used to be the easiest way to choose a computer, but that hasn’t been the case for many years. Every computer — regardless of the brand and model — can handle basic word processing, web browsing, and streaming videos in HD.

These Air Purifiers Help Rid Your Home of Smoke, Dust and Harmful Allergens

On paper traditional computers win the power war: they have faster processors, so they can run powerful apps more quickly, they have more RAM (memory), so they can keep more apps running at the same time, and they have more storage, so you can hold more files. If your job involves editing photos, videos, or music, or you like keeping a lot of media files on your computer at all times, this is going to make a big difference.

On the other hand, Chromebooks have enough power to handle the basic tasks I mentioned earlier. If your work depends on Microsoft Office, and you primarily spend your leisure time watching videos, posting on social media, or browsing the web, you won’t really notice the difference in performance. It’s nice to know you have a lot of power under your computer’s hood, but it doesn’t mean much if you don’t use it.

The only tech spec I recommend looking at is storage. Chromebooks don’t have very much, so you should only consider one if you stream movies and music, and keep your photo library backed up on the cloud. If you like keeping a local movie, music, and photo library, it’s best to stick with a PC.

Chromebooks Run Fewer Apps, But Are Less Likely to Get Viruses

The PC’s biggest strength is its ability to run millions of different apps you can get from anywhere on the internet. This is due in part to the Windows operating system PCs use, which is easy to program for. Chromebooks have a far more limited app library, and you can only get software available in the Google Chrome web store, and Google’s Play Store.

Both platforms share some big name apps like Microsoft Office, but if you need a specific piece of software (lets say an audio converter that supports niche formats), you’re out of luck on a Chromebook. You’ll definitely apps suited for common tasks (photo editing, video conferencing, general productivity), but apps you’re used to using on a PC may not be available if you go the Chromebook route.

Again, this limitation isn’t likely to bother you if you rely on your computer for general tasks, and it comes with a big upside. Chromebooks run on the ChromeOS operating system, which is basically a souped-up Chrome tab with a basic file system beneath. Because ChromeOS is locked down, and can’t run software downloaded from anywhere on the web, you’re far less likely to run into any viruses, spyware, or spam. Bad apps can still get into the Chrome web store and Google Play Store, but it’s far less likely, and those apps can be removed easily. This upside is huge if you’re worried about cyber security, and only need computers for basic tasks.

If you need to run specific software, it’s still worth getting a PC that runs Windows, but you should definitely get some additional computer security tools if you decide to go that way.

PC vs. Chromebook: Which One is Best?

In many ways, Chromebooks are the computer of the future: you don’t need to keep your files on it, they’re in the cloud; you don’t need that much power, it’s more than enough to get you by; all the apps you need run well, and its operating system is much safer than Windows.

If that view of the future doesn’t match your present, though, a traditional PC laptop running Windows will let you run almost any app you want from anywhere in the world. You won’t have to worry about software compatibility or performance (unless you’re doing truly resource intensive work), and can take simple precautions to avoid cyber threats.

There are hundreds of good choices regardless of which type of computer you get for school or work, so we’ve recommended one of each to help you out.

If you need a PC laptop running Windows for school or work, Lenovo’s IdeaPad 3 is the way to go.

The computer has a 14-inch 1080P (1920X1080) display, so you’ll be able to see everything you’re watching or reading very clearly. It has 8GB (Gigabytes) of RAM, which is enough to run several apps at the same time with no hit to performance, and a 256GB SSD that provides ample storage for your data. The computer’s standout extra is the AMD Vega 8 graphics chip that comes bundled with its 2.1Ghz dual-core processor.

This laptop has a built-in webcam for video calls, and a shutter you can physically close for privacy. It supports Bluetooth 4.1 and WiFi 5, which are fairly new versions of those wireless standards, and has an array of ports, so you can connect different accessories. There are three USB ports, one HDMI port, an SD Card reader, and a headphone jack, which covers all of the basics. Lenovo doesn’t mention any exact figures about this computer’s battery life, but the amount you get will vary based on which apps you use, and how bright you keep the screen.

Lenovo’s IdeaPad 3 is more than powerful enough to handle all but the most demanding apps, and even some light to moderate gaming, so it should serve your needs as a worker or student for many years. 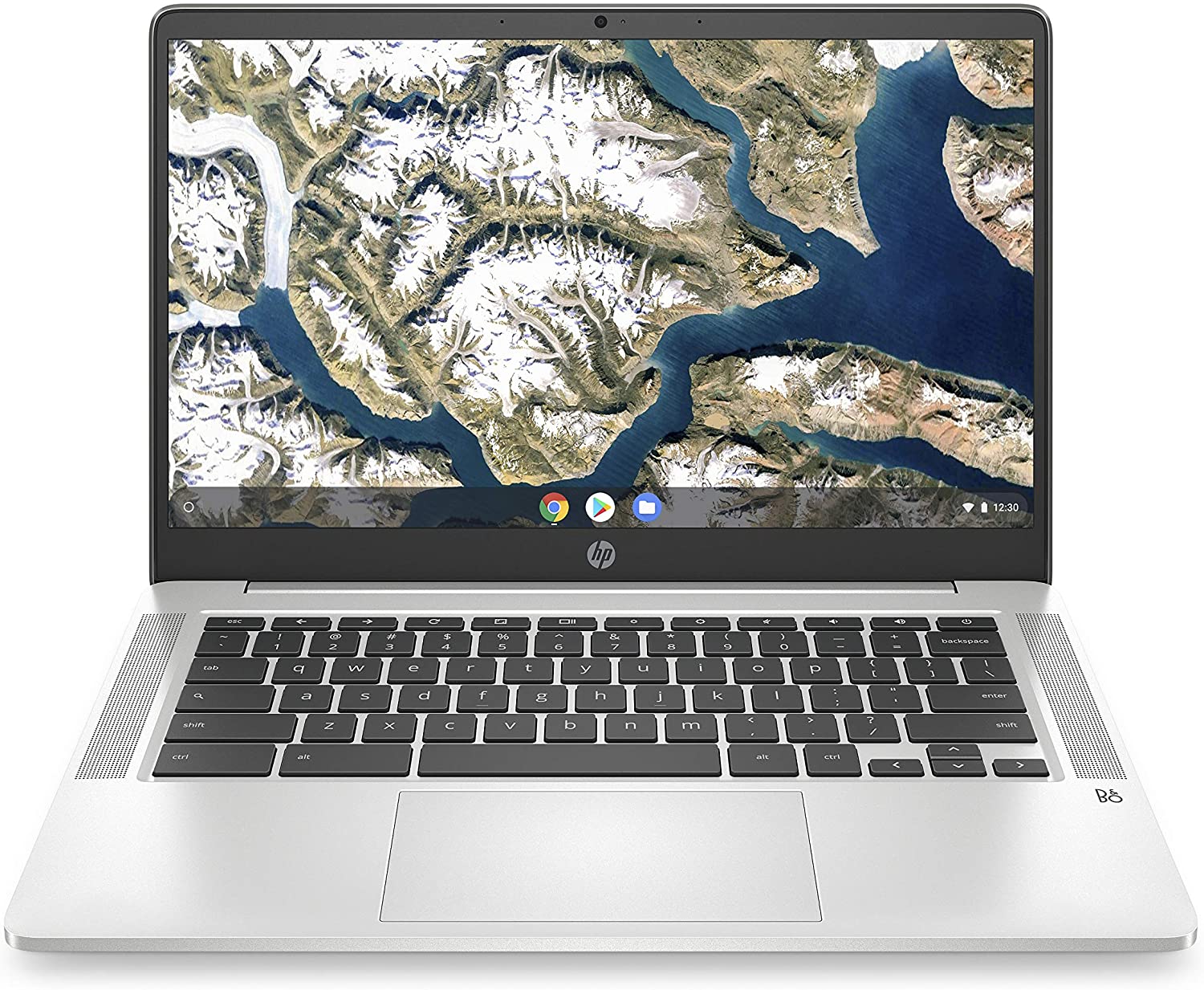 HP’s HP 14a-na0010nr is the perfect Chromebook for light to medium computing tasks.

The computer has a 14-inch HD display with a resolution of 1366 x 768. You may notice some graininess when reading text, but images and videos should look pretty sharp. It has 4GB of RAM, 32GB of storage, a 1.1Ghz dual-core Intel Celeron processor, integrated Intel graphics, and a built-in webcam. These specs are perfectly fine for writing papers, posting on social media, streaming videos, creating presentations, and even some light photo editing.

HP partnered with Bang & Olufsen on this Chromebook’s audio system, which uses a custom tuning to make your music and movies sound great. On the ports side, the 14a-na0010nr fares a lot better than most Chromebooks. It has two USB-C ports, one USB-A port, a Micro-SD Card slot, an HDMI port, and a headphone jack.

You shouldn’t find any problems connecting any accessories to this computer without having to find an adapter. This Chromebook also supports both WiFi 5 and Bluetooth 5.0, so you’re covered if you’d like to use this computer with wireless peripherals. HP says the 14a-na0010nr gets up to 13.5 hours of battery on a single charge (the apps you use and your screen brightness will impact this a lot). It also supports fast charging, so you can refill its battery to 50% in about 45 minutes.

If the work you do doesn’t require Windows, and you want a computer with solid specs and excellent battery life, HP’s 14a-na0010nr is the right pick.