If you’re looking for the best projector for your home theater system, you typically have to choose between portability and image quality. For the past couple of months I’ve been testing out Anker’s Neblula Mars II Pro, a battery-powered projector that bridges the gap between those two types, and works a lot better than I expected it to.

The idea behind the Mars II Pro was to make a no-compromise totally portable projector, and in my experience, Nebula largely succeeded both in terms of image quality and sound.

The projector has a native resolution of 1280 x 720 (720P HD) and a 10W speaker system, so it can create a high-resolution image, and doesn’t require additional audio gear. It runs a version of Android with a set of pre-loaded streaming, plus access to an app store that lets you download more. It comes with a remote, but you can control the projector through the Nebula Connect app (iOS and Android). The projector can create a screen between 30 and 150 inches across, depending on how far away it is from your wall or screen. For reference, it’ll create a 100-inch screen from 8.73 feet away, so you’ll need a little bit of space to get the best experience.

In terms of connectivity, the Mars II Pro only has space for the essentials: one HDMI port, so you can connect gadgets like game consoles, a headphone jack in case you do want to connect a better set of speakers, and a USB port, which allows you to play videos off of a flash drive. The relative lack of ports is balanced out by support for AirPlay 2, an Apple-developed technology that allows you to wirelessly stream audio and video from an iPhone, iPad, and Mac. The Mars II Pro even supports Bluetooth, so you can stream music to it and use the projector as a portable speaker.

The Best Portable Projectors For Your Next Movie Night at Home

The projector’s only Achilles heel is its maximum brightness, which is 500 Lumens. That’s roughly one-quarter the brightness of most home theater projectors, and does impact its performance in bright rooms. This concession was made to allow the projector to run for up to three hours on battery power.

Worth noting: I tested the Mars II Pro by playing video games on the Nintendo Switch and streaming videos from both a flash drive and its built-in apps under different lighting conditions. 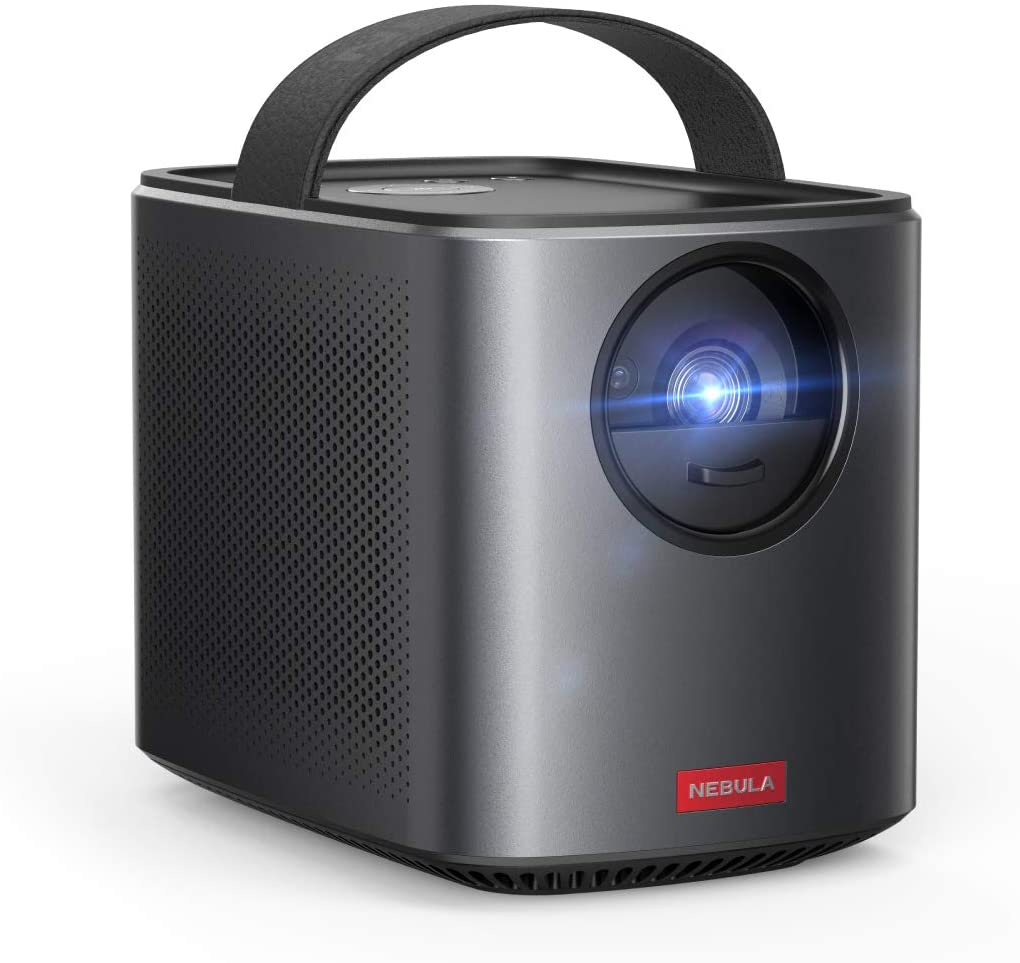 Easy to Set Up and Use

The Mars II Pro has a lot of technology packed inside of it, and surprisingly Nebula’s all-in-one approach really worked.

Setting up the projector has four steps, and takes about 10 minutes: first, flip the shutter down to turn the projector on. Next, select your language settings, then connect your Mars II Pro to your WiFi network (optional, but encouraged). Lastly, if you connected the projector to WiFi, it may find, download, and install a software update.

Once all that’s done, you’ll be taken to the projector’s main screen, which is full of apps, and access to settings. You can navigate the projector’s interface in three ways: with an included remote, by pressing buttons on top of the projector itself, and through the Nebula Connect app. I tried all three, and they all worked very well. My preference ended up being the app, but your mileage may vary.

One of my favorite features about the Mars II Pro is that it’ll automatically detect if something is attached to its HDMI port instead of forcing you to choose that input from the projector’s main screen. If my Switch was connected and turned on, I’d be able to jump right into my game without touching a remote. It sounds small, but this small touch improved my experience of using the projector every time I turned it on. Another cool feature is that the Mars II Pro automatically adjusts its lens, so you get a clear picture without fiddling with different dials.

Jack of All Trades, Master of Some

In my testing, the Mars II Pro performed very well in all tasks, as long I was using it in a dark room. Playing video games in high definition on a 100-inch screen never got old, even though the color reproduction and resolution couldn’t match the 4K TV I’m used to using. I did notice a little bit of video stuttering when playing The Legend of Zelda: Breath of the Wild, but not enough to detract from the experience.

I never noticed any type of video flaws when streaming HD video from Netflix and YouTube, or playing a movie from a flash drive. The image fidelity was always very smooth, and videos from streaming sites loaded very quickly. You will need to connect this projector to WiFi if you want to use the streaming apps built into it, and download new ones (which is also very simple), but you can always connect a media streamer to it instead if you prefer.

If the Mars II Pro has a surprise “it” feature, it’s the 10W speaker system, which always delivered loud, clear sound. I never once felt the need to connect the projector to an external pair of speakers, and was particularly impressed at how well it balanced dialogue and sound effects while watching movies. I generally kept the volume between 50% and 75%, which was sufficient for a mid-sized bedroom.

In terms of performance, the only time I saw the Mars II Pro struggle was in brightly lit rooms. Its 500 lumen bulb can’t compete with direct sunlight, which washes out the picture substantially. Closing blinds helped significantly, but this is a restriction you should consider if you’re planning on getting the Mars II Pro exclusively for home theater use.

That said, the low brightness is in service of making this projector portable, which is a very good trade off. The experiences I noted above — playing games, streaming videos, downloading apps — all work just as well when the Mars II Pro is disconnected from power. The ability to use the projector outside of your home makes it more functional, and frankly pretty cool. There’s a strap attached to the projector that makes it easier to carry. At just under four pounds you shouldn’t have too much trouble taking it from room to room, or to your back porch. To me, it’s heavy enough to feel substantial, but not enough to be cumbersome.

Nebula says you can get up to three hours of use from the Mars II Pro per charge, but that figure is only accurate if you let it enter power-saving mode, which dims the bulb to save energy. At full brightness I was able to get around two hours, which is enough to watch a few episodes of a show, or one movie. Being on battery power didn’t seem to effect the Mars II Pro’s WiFi speed, so streaming videos from Netflix and YouTube worked fine.

It’s hard not to recommend Nebula’s Mars II Pro to anyone interested in a portable projector. It doesn’t skimp on any major features, with the exception of Nebula’s need to balance brightness and battery life. Still, that was a necessary choice, not a cut corner.

In terms of ease of use, versatility, and performance, the Mars II Pro is a great option for home theater enthusiasts who want to take the theater experience with them on the go. If you want to host an outdoor movie night, and don’t want to spend time setting up a bunch of equipment, you won’t find a better choice.

The Professional-Chess Cheating Drama Is Only Getting Crazier