Smartphone cameras have slowly but surely replaced point-and-shoot cameras and DSLRs over the decade. Whether you use an iPhone or Android phone, the ability to shoot 4K videos and high resolution images, and easily share them with friends and family is a huge improvement over waiting for prints to develop, and sending them by mail.

The best phone camera accessories are designed to work with either the iPhone or Android phones, but most of the one’s we’ve selected can work with both. So if you upgrade your phone, or change platforms, you can still use the same photo accessories below. Smartphones won’t be able to totally match the photo quality of a DSLR (their video quality is a lot closer), but they’re catching up, and the accessories below can further bridge that gap.

The Best-Designed Office Chairs for a Stylish and Ergonomic Workspace

You’ve taken enough photos with your phone to know the importance of good lighting. You’ve also been to enough parties and events to see everyone from influencers to event photographers using these clip-on ring lights.

This popular ring light illuminates your sightlines (and your selfies) with three brightness levels and 36 long-lasting LEDs. Unlike your flash, the ring light emits a subtle, softer glow, that won’t look harsh or overexposed in photos. You can also clip the light onto the back of your camera to improve the quality of low-light photos, like your dinner at a restaurant, or a group picture with friends. 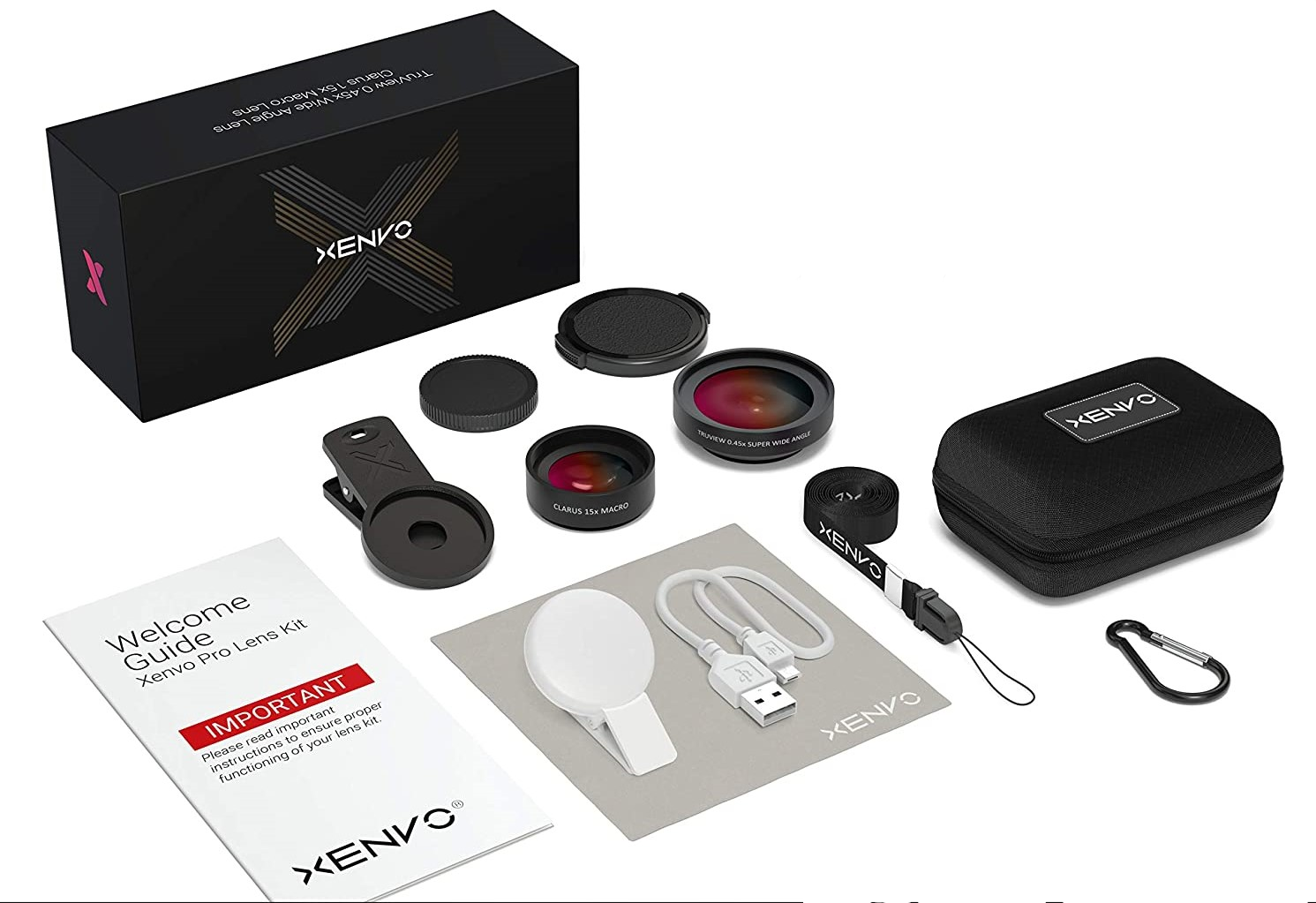 The latest smartphones have multiple lenses, but Xenvo’s Pro Lens Kit is a good hack if yours only has one.

The kit comes with two lenses: a 0.45x wide-angle lens for taking zoomed out photos, and a 15x macro lens for taking extremely close up photos. The Macro lens is different than a zoom lens because it lets you take clear pictures when you’re physically close to your subject; it won’t help if you’re far away. You attach the lenses over the one on your smartphone with a clip, so it’s easy to put on and remove.

Xenvo uses coated optical glass for its lenses, which minimizes any lens flare or reflections. Unlike cheaper attachments in the marketplace, you won’t get that annoying “vignetting” (read: dark corners) in your photos.

In addition to the lenses, this kit comes with a rechargeable LED light (so you can use it at night), charging cable, lanyard, case and cleaning cloth. This lens kit is likely be the biggest smartphone camera upgrade in our guide because it allows you to take pictures that would have been impossible to get without it. 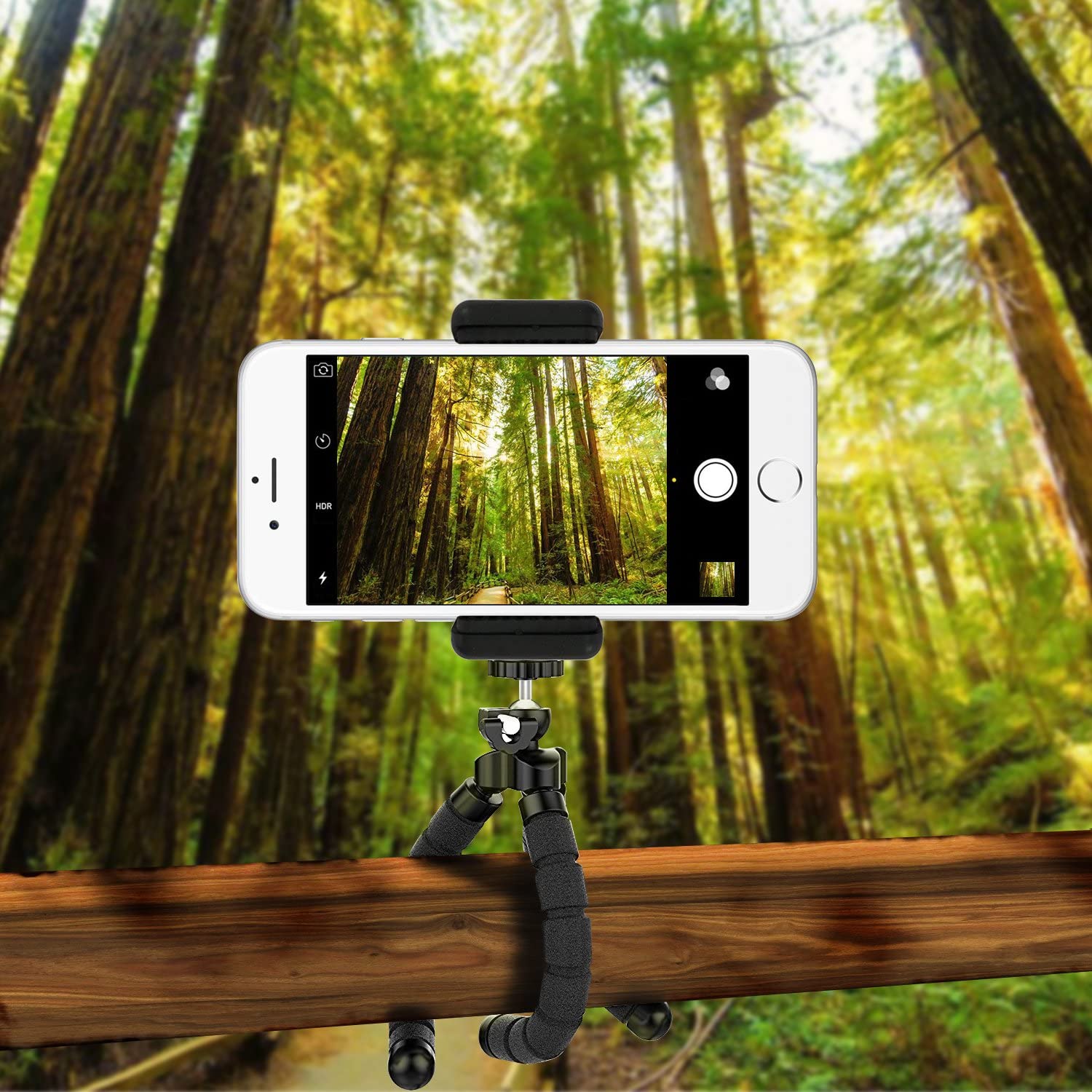 If you want to use your smartphone camera to create a time lapse video, or make a vlog, you’re going to need a tripod. Ubeesize’s portable tripod is six inches tall, and weighs just 0.33 pounds, so you can easily throw it in a bag for outdoor shoots. The tripod’s legs are made of flexible foam, and can be wrapped around a pole or tree.

The tripod’s mount can fit phones between 2.25 inches and 3.75 inches wide, which basically covers all of them (for reference, an iPhone 11 Pro Max is 3.06 inches wide).

Ubeesize bundles this tripod with a wireless remote, so you can take pictures, or start and stop videos without touching your phone. This is a great accessory if you want to capture images in nature, or take large group shots. The company also includes a camera screw, which allows you to use its tripod with an action camera. We have an entire guide dedicated to full-sized tripods for vlogging, but Ubeesize’s portable option earned a spot in our guide because it’s so easy to take with you. 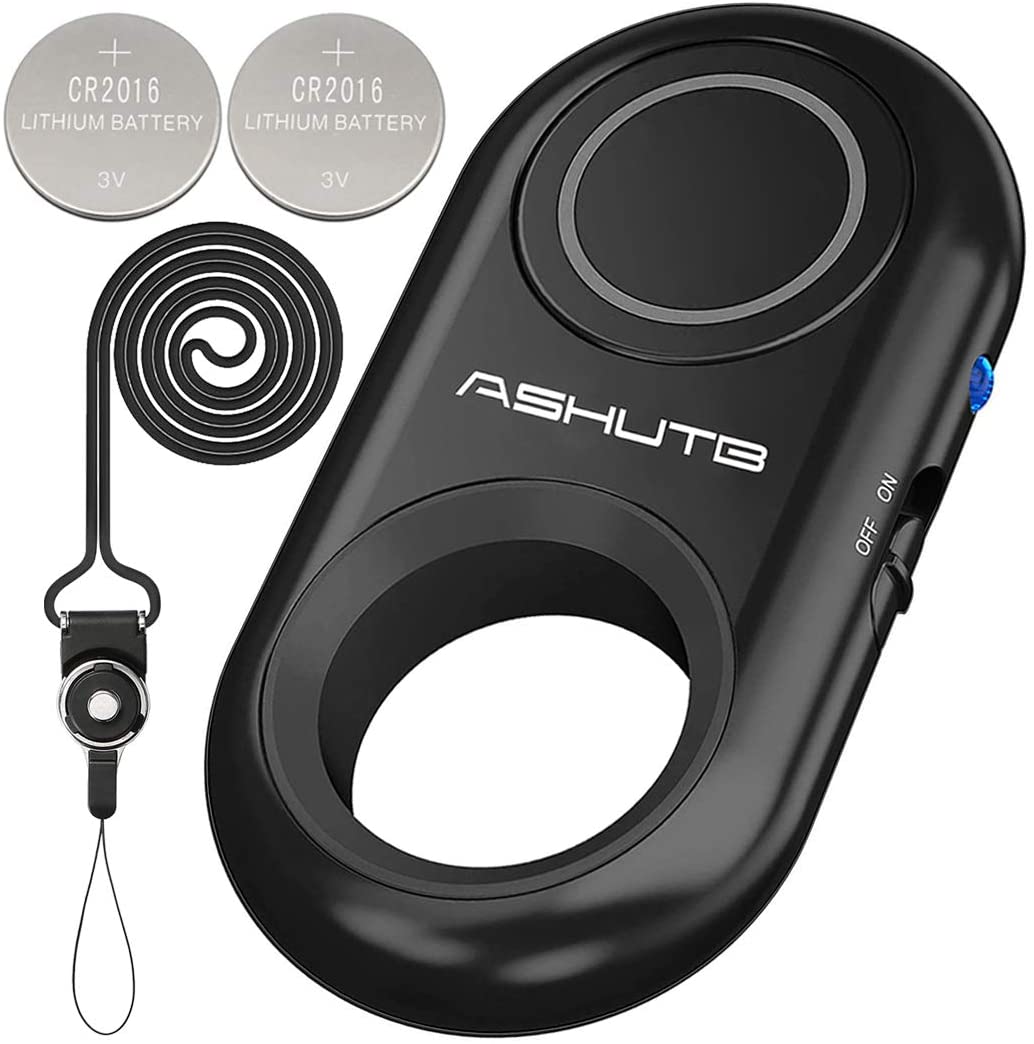 A Bluetooth Remote Shutter is one of the most practical photo accessories. It does two jobs: starting and stopping video, or taking a picture when you push its button. This one from ASHUTB can connect to any smartphone (iPhone or Android), and works from up to 30 feet away. It’s only two inches tall, and weighs 0.018 pounds, so you can keep it in your pocket if you’re taking a group shot.

ASHUTB includes two 3V batteries and a lanyard with the shutter button, so you can use it right out of the box. It won’t use too much power, but you can turn it off and on by flipping a switch on the side to preserve battery. It may be simple, but this Bluetooth remote shutter will definitely come in handy if you want to take photos without disturbing your subject. 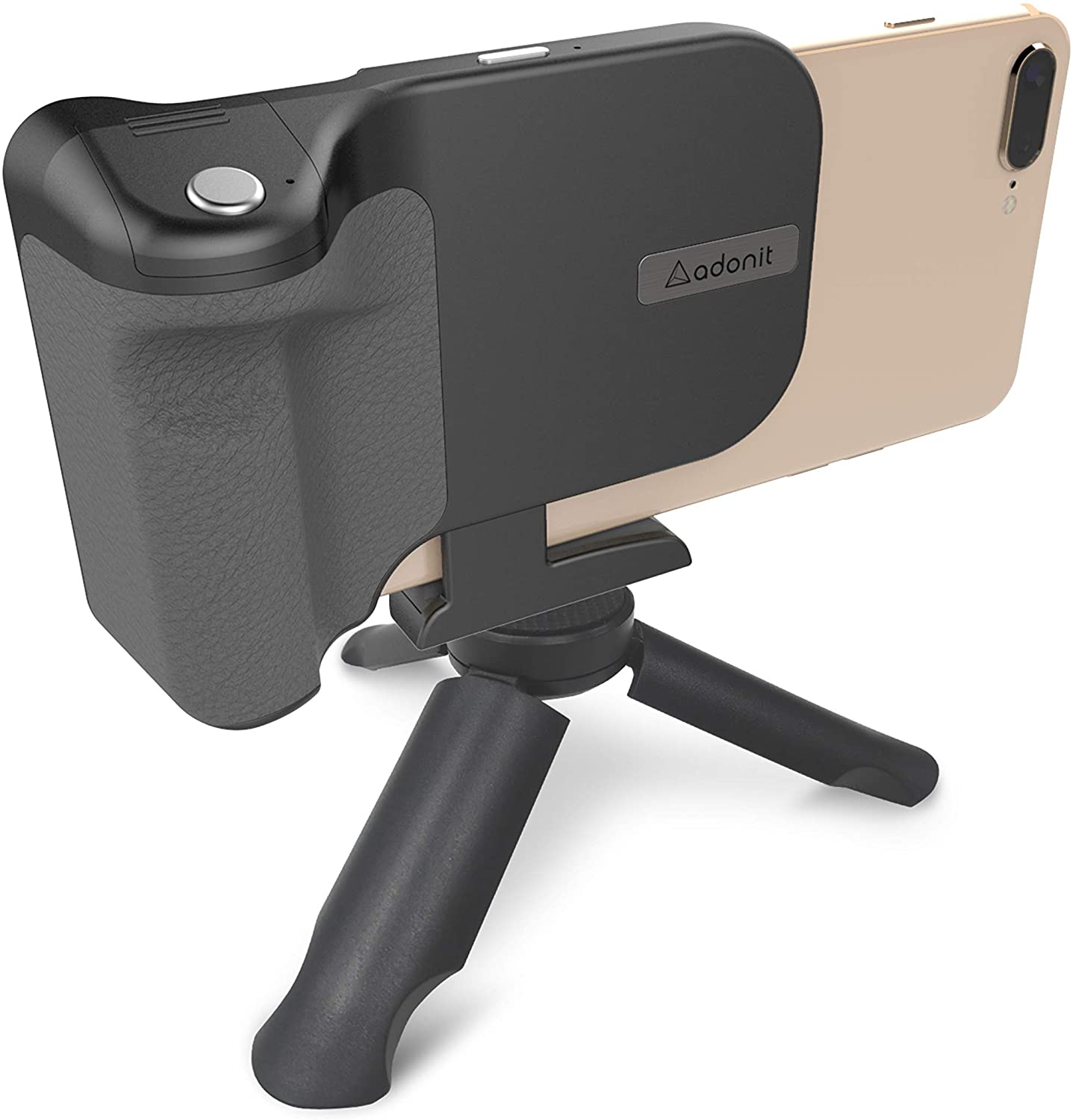 One of the hardest transitions to make from a traditional camera to smartphone photography is holding it correctly. Phones can be slippery, and it’s easy to try to steady your shot by holding it with two hands, which can lead to blocking the camera with your fingers.

Adonit’s Photogrip slides onto your phone, and recreates the feeling of holding a point-and-shoot. As its name implies, part of the grip is covered in a textured, non-slip finish, so you can take pictures with one hand. It has a Bluetooth shutter button on top, which you can pair to your phone, and push to take pictures.

Although it’ll make your phone look and feel like a traditional camera, Adonit’s grip has a few modern touches. It comes with an attachable base, which is basically a mini tripod you can use to steady your shots. It also has a built-in Qi charger, which can recharge your phone’s battery while it’s in the grip. You can recharge the grip itself by plugging it into a power adapter via its USB-C port (cable included).

If you’ve been hesitant to put down your old camera because holding your smartphone feels awkward, this accessory should significantly reduce that problem.

6. Hohem All in 1 3-Axis Gimbal Stabilizer 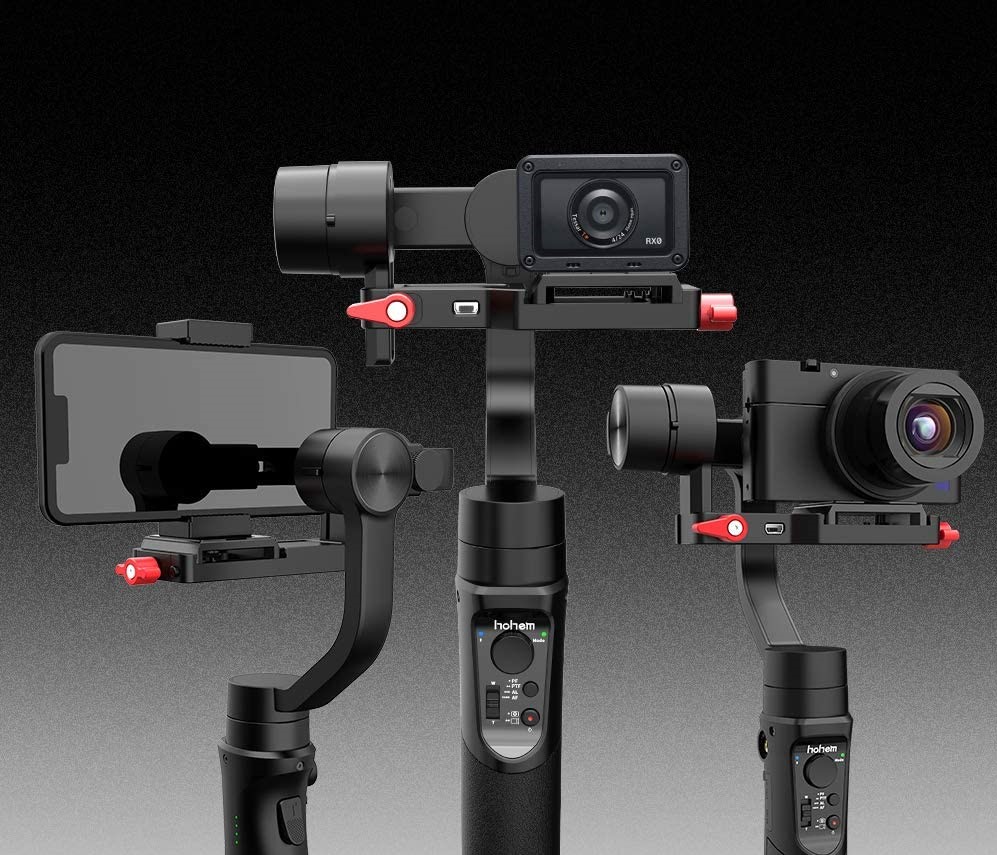 A big difference between smartphone videos and “professional” videos is image stabilization, which compensates for stuttery movement, and makes footage look smooth as the camera moves. Smartphone cameras do have some level of OIS (optical image stabilization) and some use a gyroscope to reduce jitters, but a Hohem’s Gimbal Stabilizer will do a far better job.

Once your phone is mounted, the gimbal will spin, turn, and twist as you move you record video. Rather than keeping your camera completely still, it’ll make footage from every angle smooth by moving it at a constant rate. It may be hard to explain, but you’ll notice the difference in your videos immediately.

Hohem’s gimbal can be used manually, by holding it in your hand, or automatically by switching between three camera modes. “Dolly Zoom” pulls the camera away from a subject to make the background look out of focus, but keeps your subject in focus; “face tracking” allows the camera to follow a particular subject as they move around; “sport mode” will increase the gimbal’s motor speed to capture fast-paced motion.

You already carry around a 4K video camera in your pocket, Hohem’s gimbal will help you get the most out of it.