If you’re ready to set up your first home sound system, or are thinking about giving your current one an overhaul, your best option is to get each component individually. There’s nothing wrong with getting a bundle that includes everything you need in one box (it’s definitely a lot easier), but it limits your upgrade path later on, and leaves you beholden to a single company.

Another benefit to BYOS — building your own system — is the option to customize it to your liking. Consider how much space you have and the equipment you already own. You’ll also want to look at which formats you currently listen to music on — do you like how everything sounds or could you upgrade to a more premium listening experience? Finally, building your own home audio system means you can start with a good foundation, and build your home audio up over time instead of being stuck with something you’ve paid for but don’t use often.

There are thousands of different combinations of stereo components you can use to build your system, but we’ve put together a set that includes the essentials: speakers, cables, a stereo receiver, and a turntable. This system is designed to play vinyl, CDs, and high-resolution media like DVD-A and SACDs. It’s important to note that the components below make for a good stereo home audiosystem; if you’re interested in surround sound, don’t worry, we have an alternate receiver pick for you. In fact, we’ve included an “upgrade pick” for each component, in case you want to splurge a little bit more.

Whatever your format or listening preferences, the system we’ve put together won’t set you back more than $1,000, which is a relative bargain in the audio world. 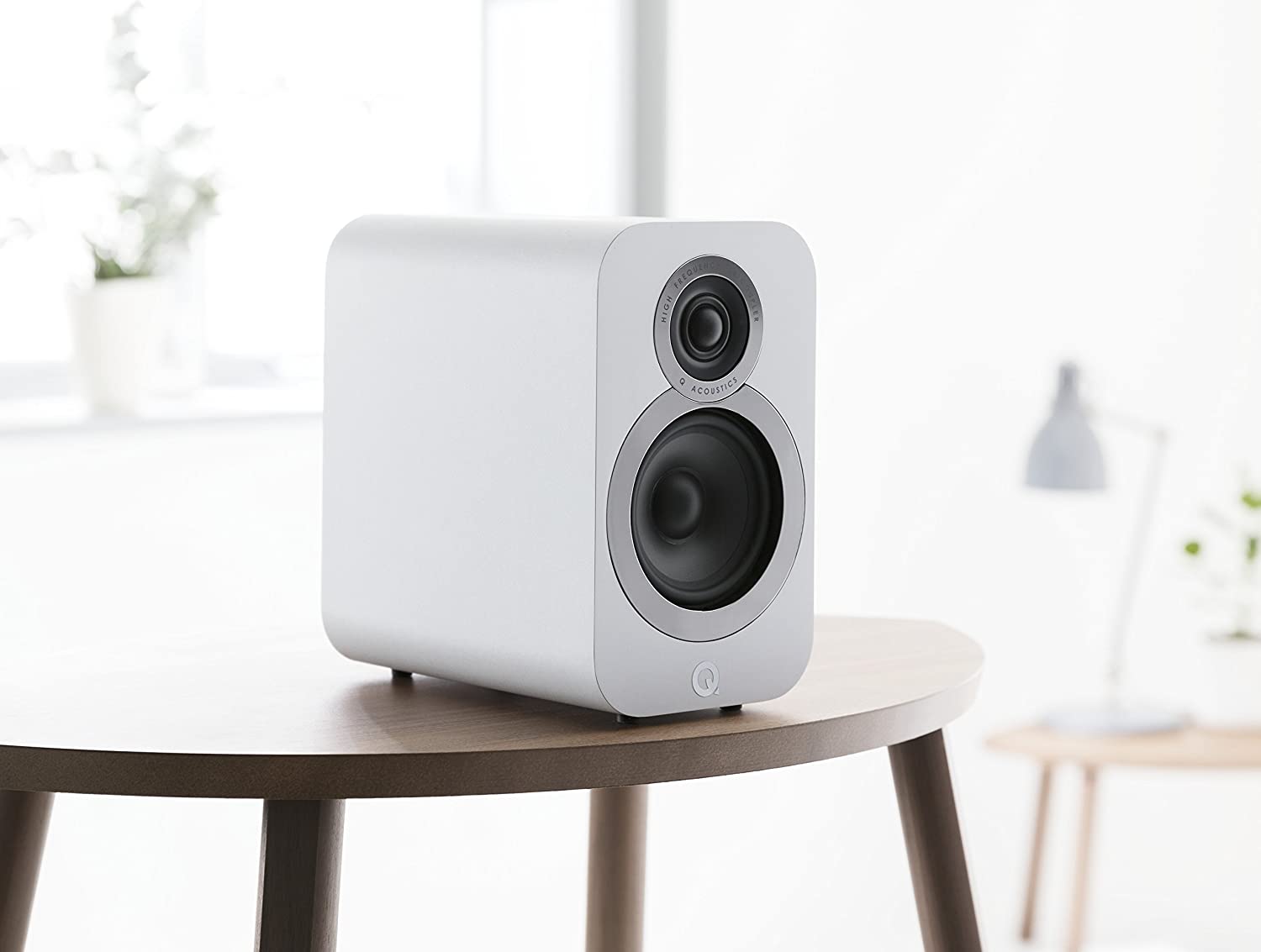 Q-Acoustics’ 3010i is are a pair of compact bookshelf speakers designed to pack an audio and video punch. They’re derived from the full-sized 3030i bookshelf speakers, which I use in my home audio system. This entry level version retains many of the same features that make Q-Acoustics’ speakers sound so good.

Each speaker has a pair of drivers (the part of a speaker that creates sound): a high-efficiency tweeter to handle high frequencies, and a mid/bass woofer that handles the midrange and low frequencies. By splitting the frequency range between two drivers, the 3010is are capable of producing a sound that’s more balanced. Each driver is made up of several different pieces, including a suspension system that prevents the tweeter from being impacted by vibrations from the woofer.

The biggest change between the 3010is are the speakers they replaced is their physical size. This model is 25% deeper, which Q-Acoustics says has improved bass response because less sound is reflected off the back of the speaker. Each speaker’s cabinet uses a custom technology called P2P Bracing, which makes them more rigid, so sound is directed toward you more directly. The speakers also sit on posts rather than the surface you place them on, which reduces unwanted distortion from speaker vibration.

This meticulous attention to detail — plus a striking, modern design — makes Q Acoustics’ 3010i bookshelf speakers a great foundation for your home audio system.

Upgrade pick: If you have the space, and want a version of this speaker with larger drivers capable of making louder, more accurate sound, consider Q-Acoustics’ 3030i bookshelf speakers, which are available at Amazon for $399.99. 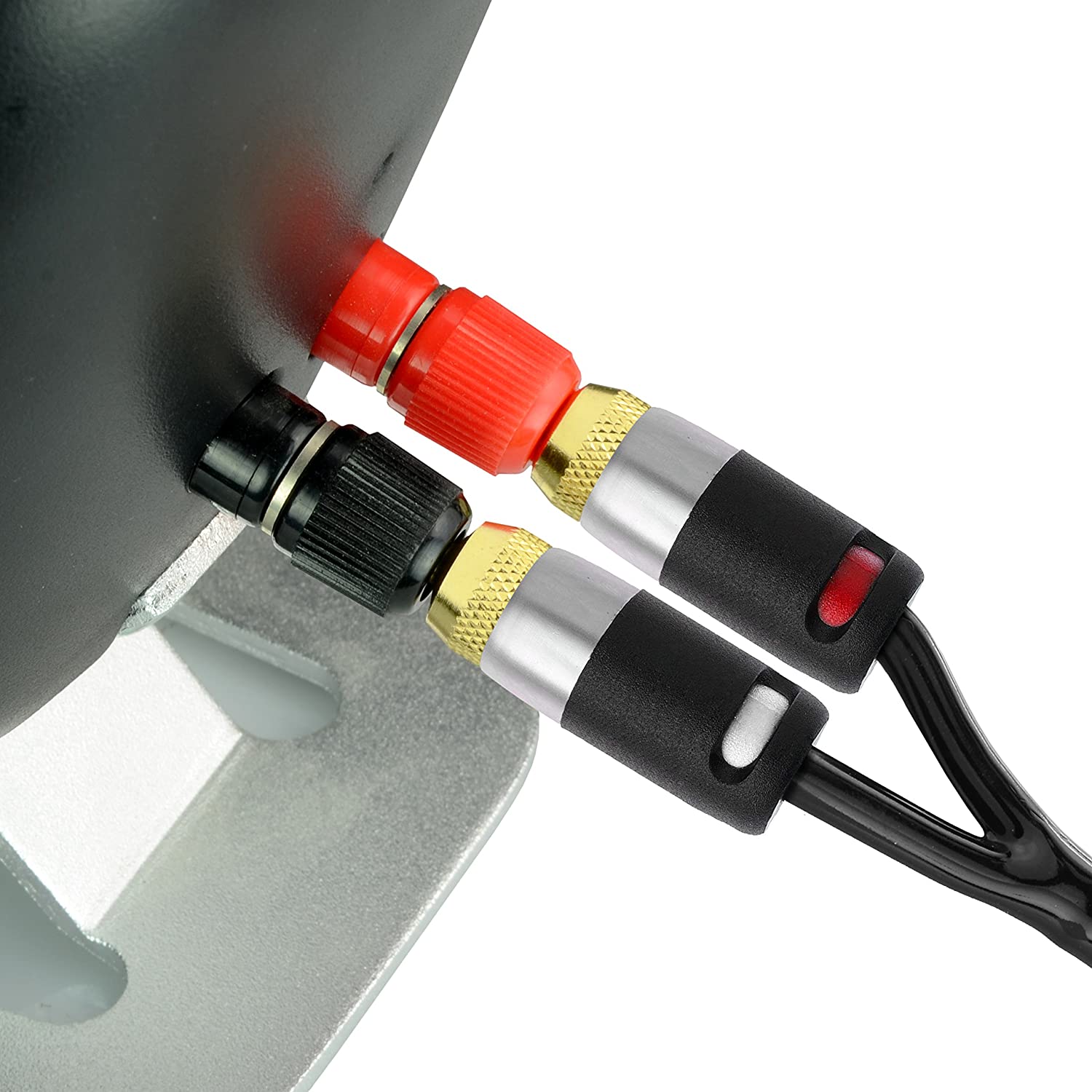 Audiophiles debate whether or not speaker cables make a different in the way music sounds, but you’ll need them regardless of your stance on that matter.

We’re recommending this cable from Mediabridge because it checks off all the right boxes. First, it’s six feet long, which should be enough to make it from your stereo receiver to your speaker.

Second, the cable terminates into banana tips, which are significantly easier to manage than traditional speaker wire, which needs to be cut and carefully threaded through terminals on your speakers and stereo components. As you can see from the photo above, some stereo components allow you to insert the plugs directly into the terminals (the Q Acoustics 3010i speakers we recommend support this feature).

One thing to keep in mind is that this cable is sold solo, so you’ll need to get two if you want to connect a pair of speakers to your stereo receiver. Beyond that, you’re good to go.

Upgrade Pick: Blue Jeans’ Speaker Cable is eight feet long, and has welded, locking banana plugs that are less prone to damage if it’s pulled or moved around. The company uses its own cable stock, and both the speaker’s components and assembly happen in the United States. One cable is available for $42.50 at Amazon. 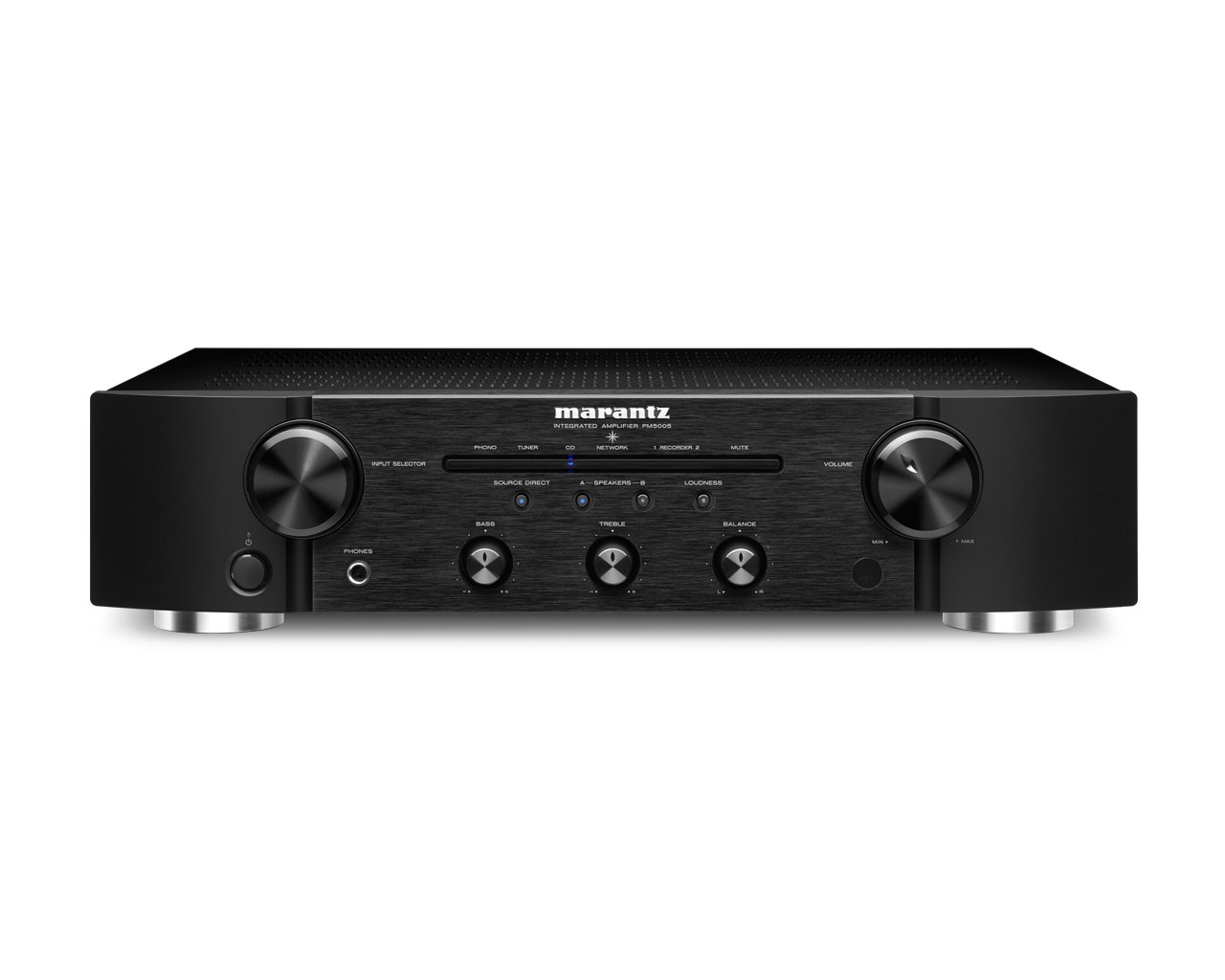 Having a good set of speakers is important, but doesn’t mean much if you don’t have anything to connect it to. Marantz’s PM5005 is a compact, all-in-one integrated amplifier that’s the perfect stereo receiver for an audiophile home audio system.

It doesn’t have modern audio and video ports like HDMI or optical in, but the PM5005 has an array of RCA (red and white) inputs on the back, which you can use to expand its capabilities. For example, you could attach an Amazon Echo to it, and stream music to it using your voice. Or, plug in a Bluetooth adapter to stream tracks in your local music library from your phone, tablet, or computer.

Expansion is one of the reasons we’re recommending the PM5005, but its stock features are impressive, too. It has a set of phono inputs and a grounding screw, so you can connect any turntable to this receiver without having to use a preamp. It has four speaker terminals, so you can listen to music in stereo or quadrophonic, an analog version of surround sound. It doesn’t have a fifth set of terminals for a center channel, or a subwoofer out, so it cannot be used in a 5.1 surround sound system.

This receiver uses a custom three-stage amplification concept and can output up to 40W (watts) of energy per channel. Marantz says these features allow the PM50005 to get loud-but-accurate sound out of speakers, and support formats like SACD and DVD-A. It also uses a custom volume amplifier circuit, which guarantees consistent performance regardless of which speakers you’re using.

If surround sound isn’t important to you (unless you have a lot of quadrophonic LPs, that is), Marantz’s PM5005 is an excellent stereo receiver that can handle any component you throw at it. It’s designed for audio gear, and deserves a place in your listening room.

Upgrade Pick: If you want a modern stereo receiver that supports surround sound, consider Yamaha’s RX-V385. It supports all major versions of Dolby Surround Sound, 4K video pass through (with HDR), and has Bluetooth built in. It doesn’t have a phono input, though, so you may need to get separate preamp depending on your turntable. This receiver is available at Amazon for $279.95. 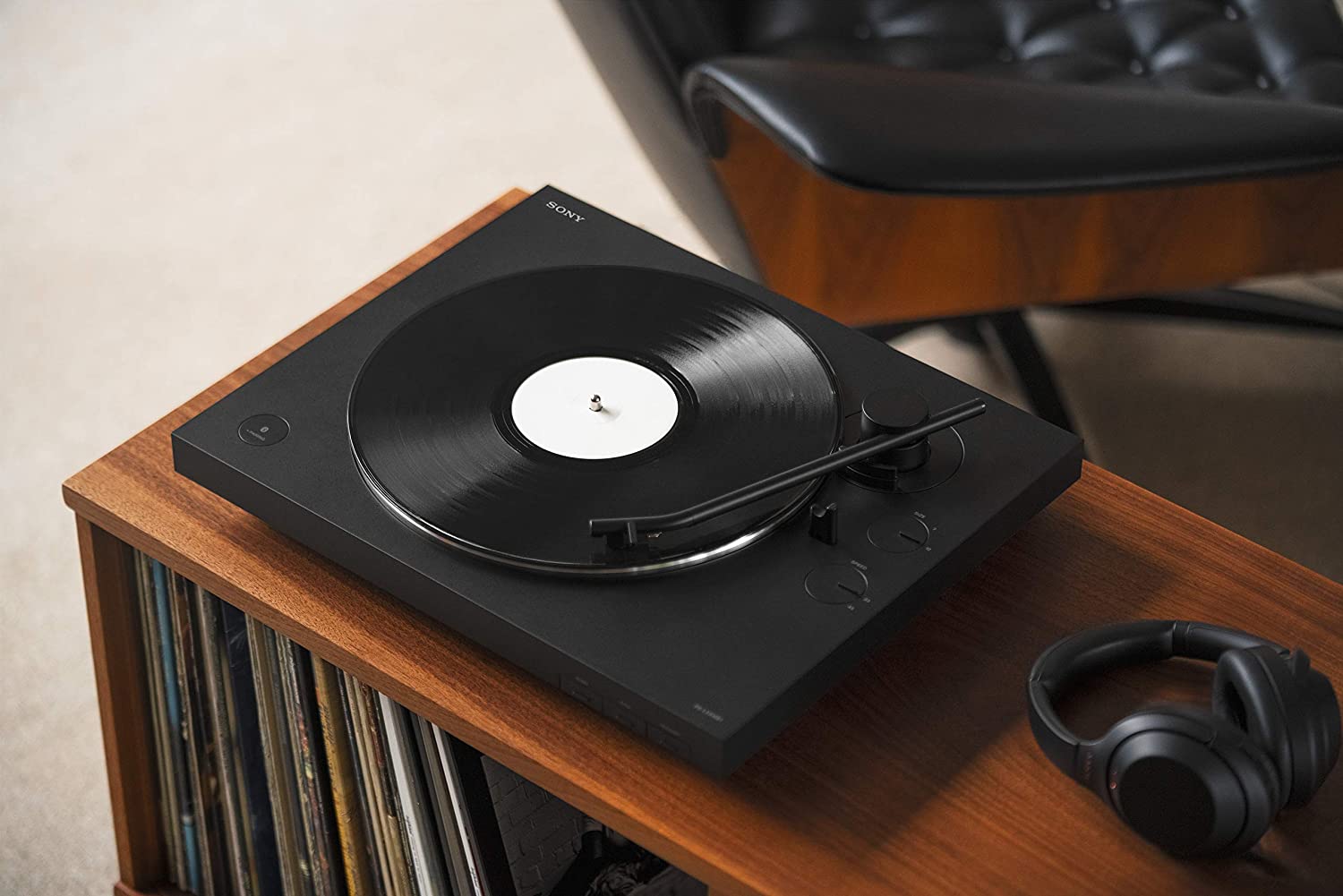 If you’re getting into vinyl for the first time, or have finally dusted off your old record collection, you’ll need a really nice turntable. Sony’s PS-LX310 earned a place in our home audio stereo system because of its exceptional versatility.

It can play LPs at 33/3 and 45 RPM, so you can listen to both your albums and singles, and has buttons that let you lift and lower the needle, and start or stop the table from spinning. Not having to cue the needle yourself eliminates the risk of accidentally dropping it and bending your stylus.

The PS-LX310 has a built in preamp, so you can hook it up to any stereo receiver right out of the box. You can also use a separate, higher-end preamp if you’d like to improve the table’s performance later on. You’re also able to upgrade this turntable’s needle if it wears out over.

Two features the PS-LX310 has that most don’t are a USB port, which you can use to digitize your vinyl, and a Bluetooth button, which lets you wirelessly stream your LPs to your wireless speakers or headphones of choice. This flexibility makes the PS-LX310 easy to recommend, especially if you want to experience your vinyl in your dedicated listening area and around your home.

Upgrade Pick: If you want a totally analog turntable, we recommend the U-Turn Orbit Plus. The record player can spin at 33/3 and 45RPM, and comes equipped with a midrange Ortofon OM5E cartridge. Its belt drive is located on the upper lefthand side of the table instead of beneath it to reduce motor noise, and its thick, acrylic platter reduces vibrations, so you get a clearer sound.

It doesn’t have a built in preamp, USB port, Bluetooth capabilities, or even a cue lever, so it’s definitely a pick for people more comfortable around vinyl. If you want a good looking turntable without many bells and whistles that’s made in the USA, the U-Turn Orbit Plus is available for $309 at Amazon.