Google’s move into the wireless earbuds space has been hit or miss ever since the first pair of Pixel Buds were released back in 2017. Connectivity issues, an uneven fit and subpar sound quality plagued the original Pixel Buds, disappointing fans and audiophiles alike. And, while Google substantially upped its game with the Pixel Buds A-Series, fans of the brand were still waiting for a pair of true wireless earbuds that could compete with the likes of Apple’s AirPods Pro and Sony’s WF-1000XM4 buds.

Five years later and we finally have a winner. All hail the Google Pixel Buds Pro, a pair of stellar noise-cancelling wireless buds that can stack up against the competition. 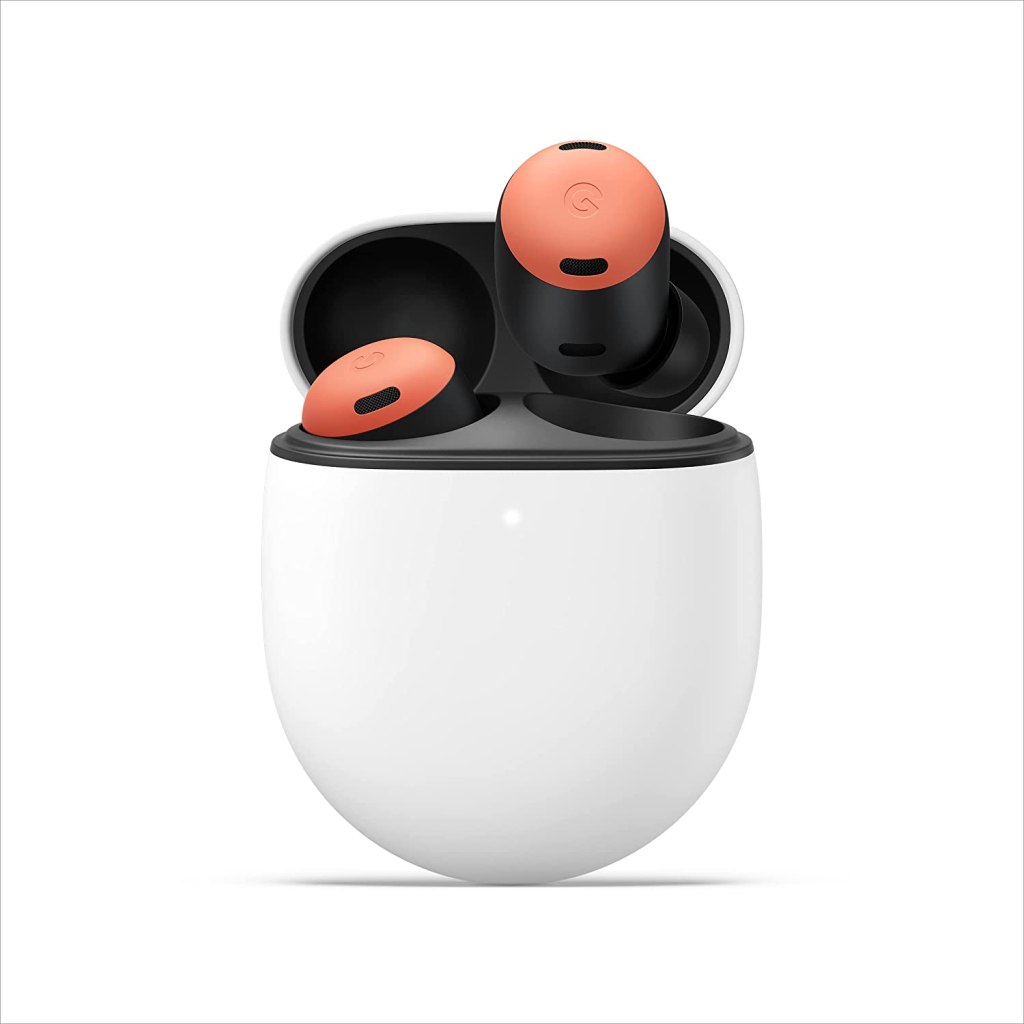 A Pop Of Color: Unboxing The Pixel Buds Pro

Google’s Pixel Buds Pro are available in four colors: Coral, Lemongrass, Fog and Charcoal. If you’re looking for something subtle for office use, we suggest sticking to the Charcoal shade. I ended up choosing the Coral colorway for my tests and loved the bright orange which easily stood out against the sea of white AirPods during my morning commute.

One first glance, the sleek, pebble-shaped case boasts a clean look with rounded edges and a simple snap closure design. You can snuggly fit this case in your jean pocket or clutch without worrying about it falling out.

In the box, you’ll get two additional ear tips to customize your buds with, a generic warranty card, and a quick setup guide — mighty useful if you’re new to the Pixel Buds lineup. While the Pixel Buds Pro support a USB-C charging cable, you won’t receive an added charger with your case. This isn’t a big deal as most of us already own USB-C chargers, but it would’ve been convenient if it came in the box. That said, the case also supports Qi charging, great if you already own a wireless charging pad.

A Big Move From Last-Gen Pixel Buds: Design and Comfort

The buds themselves feature a lightweight build, each weighing just about 6.1 grams. This is heavier than the Apple Airpod Pro’s 5.4-gram design but the extra weight is almost unnoticeable. It won’t feel heavy or weighted in your ear canal even after three to four hours of wear.

The design is a far cry from older Pixel Buds which featured a wing tip to help keep each bud secure. The new Pixel Buds Pro instead have a bulbous round head that nestles against your outer ear coupled with a plug-in style ear tip, designed to stay put even while you take part in strenuous activities.

I had a bone to pick with the fit though, as even after trying all three ear tip sizes I felt as though the Pixel Buds Pro were not sitting tightly in my ear — I was missing that sealed-in feeling I’ve now come to expect from noise-cancelling buds. I want to preface this by saying I do have a smaller ear canal and that might have been the problem — you might not have a fit issue if you have larger ears. In my experience though, I had to keep adjusting the fit every five minutes during my morning walk, a bit of a pain when the touch controls are so responsive — but more on that later.

This fit problem does not take away from their comfort factor though, as not only could I wear these earbuds for hours, I could even wear them while I took a nap without feeling any discomfort or pain.

Are the Pixel Buds Pro Waterproof?

IPX4 means you can sweat with these earbuds on and not have to worry about light splashes of water damaging them. IPX2 on the other hand also offers light sweat resistance — just make sure the charging case is not caught around any water sprays.

Drum roll please: Active Noise Cancelation is *finally* available on the new Pixel Buds Pro, making them the first of their kind to add this feature. You can activate ANC with a long press through the touch controls on your earbuds straight out of the box, or you can activate it through the Pixel Buds app. You can even issue Google Assistant a voice command to toggle on/off the ANC and transparency features.

But, how does the ANC measure up against the competition? In my tests, I found that Google did a pretty decent job with noise cancellation, although there’s always room for improvement if I’m being super nit-picky about it. While the buds were great at lulling the conversation around me and droning out most office sounds, I could still hear the incessant typing of keys from my neighbors and could also hear the sounds of New York City traffic on my walk home. This could do with the fact that the buds never properly fit in my ears but it seems to be a problem multiple Pixel Buds Pro wearers have mentioned to me.

That said, if you’re not a fan of that immediate plugged-in, complete silence-the-world-around-you feeling the Bose’s QuietComfort Buds or Sony’s buds are known for, these are perfectly satisfactory. You definitely won’t have to worry about toggling ANC off if you’re trying to stay attuned to your surroundings.

Transparency on the other hand is designed to let in surroundings noise, especially if you need to hold a conversation with your new Pixel Buds still plugged in. While I’m generally not a fan of transparency modes, I felt like Google’s transparency mode was very useful — I could hear full conversations happening around me even while the music pumped in my ear.

Digging deeper into the sound, while you might notice features like Bass Boost not available on the app anymore, you will still be thoroughly impressed by the lows on these buds. Thanks to the 11mm drivers, the bass sounded clear with each ‘thump’ on Bad Memories by MEDUZA sounding far from overwhelming even at peak volumes. Vocals boomed without distortion over the bass too.

I also felt that each song I listened to felt balanced. I was able to identify individual instruments in heavy electro house tracks and still make out the lyrics. Clarity of sound is something the Pixel Buds Pro thoroughly excel at. Even while listening to slower tracks like You’re Beautiful by James Blunt I was able to identify the subtle piano and guitar notes even while the artist crooned at a high pitch in the background. The sound of the Pixel Buds Pro can be best described as warm, full, and all-encompassing — without feeling too overwhelming.

They’re not as audiophile friendly as some of their competitors, mainly because they don’t feature advanced codec support (yet). There also isn’t customizable EQ (only a Volume EQ toggle on/off button that enhances bass and treble) which is surprising, especially considering the $200 price tag.

As for the mic, you’ll have no issues taking calls through the Buds Pro. Voices sound clear with minimal distortion, and you’ll have no trouble making out dialogue, even in larger meetings.

Do the Pixel Buds Pro Have Connectivity Issues?

If you’ve ever used a pair of Pixel Buds before, you might’ve been the victim of frequent connection drops or your audio randomly cutting out during your daily jam sessions. Luckily for you, Google has completely solved this problem with the new Pixel Buds Pro.

These buds feature Bluetooth 5.0 and over my continued usage of two weeks, I noticed no Bluetooth connectivity issues, even while I switched from laptop to phone and back to laptop again. The pairing was quick too, whether I was testing it with an Android or iOS device — these buds offer support for both.

There’s also multipoint connectivity, meaning you can simultaneously connect to two devices (your tablet and your smartphone, for example) at once. You’ll need to turn this on in the Pixel Buds app to get it to work.

The touch controls are super responsive too and can even be edited through the Pixel Buds app, in case you want another way to access your Google voice assistant.

Final Verdict: Are The Google Pixel Buds Pro Worth It?

The Google Pixel Buds Pro combine booming audio, ANC and an eye-catching design, setting them leagues apart from their predecessors. While they might not be particularly suited for smaller ears or pack extra sound features for audiophiles, they still deliver some of the best lows we’ve seen on a pair of Pixel Buds.

Not to mention, their 31-hour battery life (11 hours on the buds, an extra 20 hours in the case) means you’ll barely have to recharge as you go through your week. I used these buds for a week straight with about three hours of usage per day on average and never had to worry about recharging. In comparison, the AirPods Pro can get only up to 24 hours of listening time.

All in all, Google managed to thoroughly impress me with the Pixel Buds Pro and renewed my faith in its wireless earbuds line. They’re a great accessory for Android users especially, and the added multipoint connectivity makes it that much easier to stay connected to your music as you switch between different devices.