If you’re still using the WiFi router that your ISP (Internet Service Provider) installed, or haven’t upgraded in a few years, the introduction of WiFi 6 technology makes now the perfect time.

WiFi 6 routers differ from their predecessors in the three ways that really count: They’re faster, more secure, and capable of connecting to more devices without getting bogged down or slow. If you’re in a house or apartment with multiple people working (or learning) from home, you’ll notice the difference.

Because WiFi 6 was just ratified recently, getting a router that supports it now means you won’t have to replace it for a pretty long time. Some benefits, like reduced network congestion and security will be available immediately, while you’ll notice increases in speed over time as you get devices that support WiFi 6, or upgrade your internet plan once your contract is over. Don’t worry, WiFi 6 is an open standard that’s backwards-compatible with any devices that connect over WiFi, so you don’t need to replace all of your tech at once.

The Best Fire Tables For Your Backyard or Patio

I’ve personally tried a WiFi 6 router, and the benefits, specifically the amount of devices that could be used at the same time without latency (lag), and improved signal strength throughout distant corners of the place I’m staying were very impressive. You may not think of a WiFi router upgrade very often, but right now it’s totally worth it.

What Are The Best WiFi 6 Routers?

There are many factors to think about when choosing the best WiFi 6 router for you; below are the most important ones, which we considered while we were researching this list.

Speed: In terms of speed, WiFi 6 maxes out at 600Mbps (megabytes per second) on the 2.4Ghz spectrum, and 9608Mbps on the 5.0Ghz spectrum. Its predecessor had maximum speeds of 433Mbps and 6933Mbps; most modern devices (smartphones, tablets, computers, smart TVs, media streamers) support 5Ghz connections, so the bump is pretty big.

Not all WiFi 6 routers can reach this maximum speed, but they’ll still be higher than WiFi 5 routers, and carry many additional benefits. The biggest hurdle to getting ultra fast speeds will be your internet plan. If that has a maximum speed of 200Mbps (megabits per second), it won’t matter what your router’s theoretical fastest speed is, as you’ll be capped at that rate.

Coverage Area: Having a wireless router that can make a fast connection doesn’t matter much if it can’t reach every room in your house. We made sure to choose routers with a long reach, so you don’t have to deal with dead zones or weak spots.

Connectivity: WiFi 6 routers are better at allocating bandwidth between multiple devices by breaking up chunks of the wireless spectrum into smaller bits called subchannels. Your devices can connect to the router via these subchannels instead of fighting for access to the larger bits of spectrum, which are fewer and further between.

This advantage will be even greater if you choose a tri-band router, which sends out a single 2.4Ghz network and two 5.0Ghz networks. Your WiFi 6 router will automatically distribute your connected devices between the bands, which will free up additional congestion, and increase its signal strength and speed.

Security: WiFi 6 routers support the latest generation of WPA (WiFi Protected Access), which deprecates legacy protocols that were prone to manipulation, and makes it easier to cut off an unwanted user’s access to your network if they crack your password.

Ease Of Use: Wireless routers have been notoriously difficult to manage in the past, but the situation has gotten a lot better recently. All of the routers in our guide allow you to change key settings — your password, enabling or disabling a firewall, blocking certain devices from accessing the internet — via an app on your smartphone (iOS and Android). It’s far better than logging into your router and navigating around an old web interface.

Mesh vs. Point-To-Point Router: Modern wireless routers come in two variants: point to point, or mesh. Point-to-point routers are traditional: they have antennas sticking up from the back, and stay connected in a fixed point in your home.

Mesh wireless routers are newer; instead of one router, they typically come in packs of two or three, which you place in different parts of your home to create a larger, stronger network. The type you choose will depend on the size of your home — smaller places can get away with a single router, larger ones could use the extra support of a mesh network — but there’s no wrong answer.

Cable Modem vs. WiFi Router: It’s important to know that a wireless router is not the same as a cable modem. A cable modem connects to your cable or fiber optic cable to bring the internet into your home. The cable modem is the source of the internet in your home; your WiFi router’s job is to spread that signal as far as it can without creating a weak connection 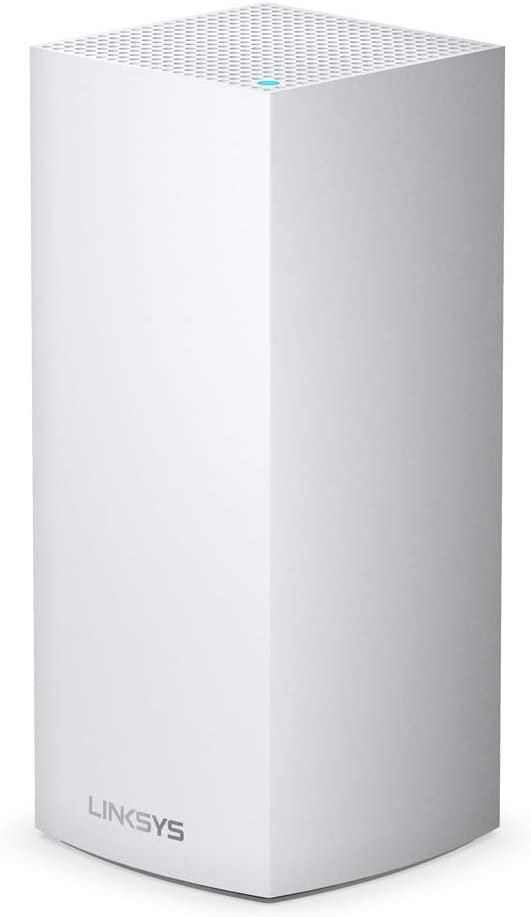 Linksys’ MX5 is the WiFi 6 router I’ve been testing for months, and it’s the best one I’ve ever used.

It’s a tri-band router with a maximum speed of 5.3Gbps (again, this isn’t broken down between bands) and can create a network that can cover up to 3,000 sq. ft. In my experience, the MX5 has been able to supply a two-floor condo (plus basement) with extremely fast internet. I was able to steam 4K video while the people I was living with streamed music on a WiFi enabled multi-speaker audio system and uploaded and downloaded large files without any noticeable decline in speed.

Setting up the router took about 10 minutes in Linksys’ app (iOS and Android), which included the time to set up a network name and password. Although the app is well-organized, I haven’t had to use it much since I set up the router, since performance has been rock solid.

Although it’s a mesh router, chances are high you’re only going to need one MX5 to cover your home. It’s nice to know you have the option to pair it with another MX5, though, if you’d like to cover other parts of your property (front yard, porch, driveway, backyard, lawn, etc.). The highest compliment I can pay to the MX5 is that it replaced a three-router mesh network without a hitch in performance. Everything I (or anyone in the house) did on the internet happened very quickly.

Linksys’ app has a section for parental controls that covers the basics. You can block specific websites, or put certain devices on a usage schedule to avoid late-night media binges. This was designed for children, but it could be a useful tactic to help adults know it’s time to start winding down before bed.

This may not be the last router you ever own, but Linksys’ MX5 is the one you’ll keep around for a long, long time. 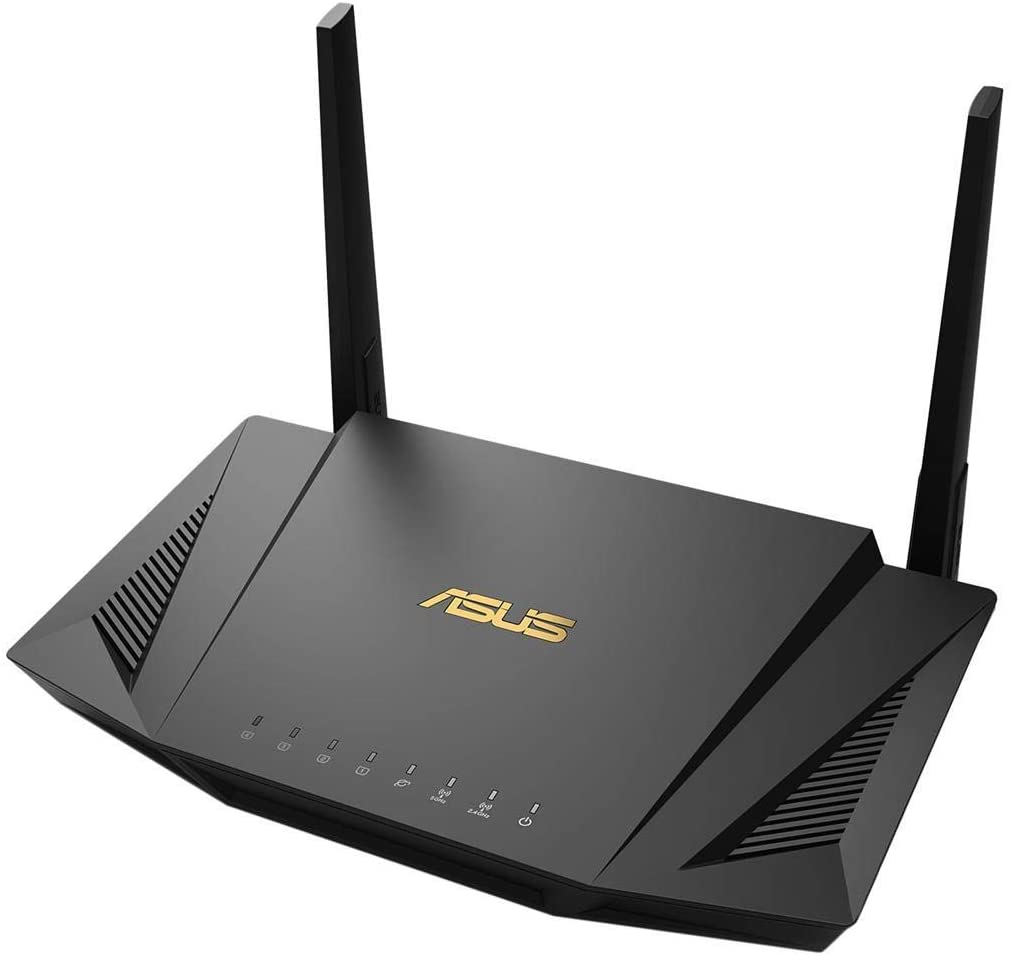 It has a maximum speed of 574Mbps on the 2.4Ghz frequency,  1201Mbps on 5Ghz frequency, and ASUS says its coverage area is up to 1,500 sq. ft. (square feet). The RT-AX56Ucan be used on its own as a single-point router, or connected to other ASUS routers through a technology called AiMesh. A single router may make sense for your current living situation, but it’s good to know you can expand the network later on if you’d like.

The big way this router stands out is that its security is bolstered by Trend Micro’s AiProtection Pro. The software is baked into the router, and allows you to access parental controls (including banning certain app types or websites). This software is updated regularly to patch old security holes, and protect you from new ones.

If you’d like a single, secure router that can create a fast, medium-sized network, the AX56U is the right choice. 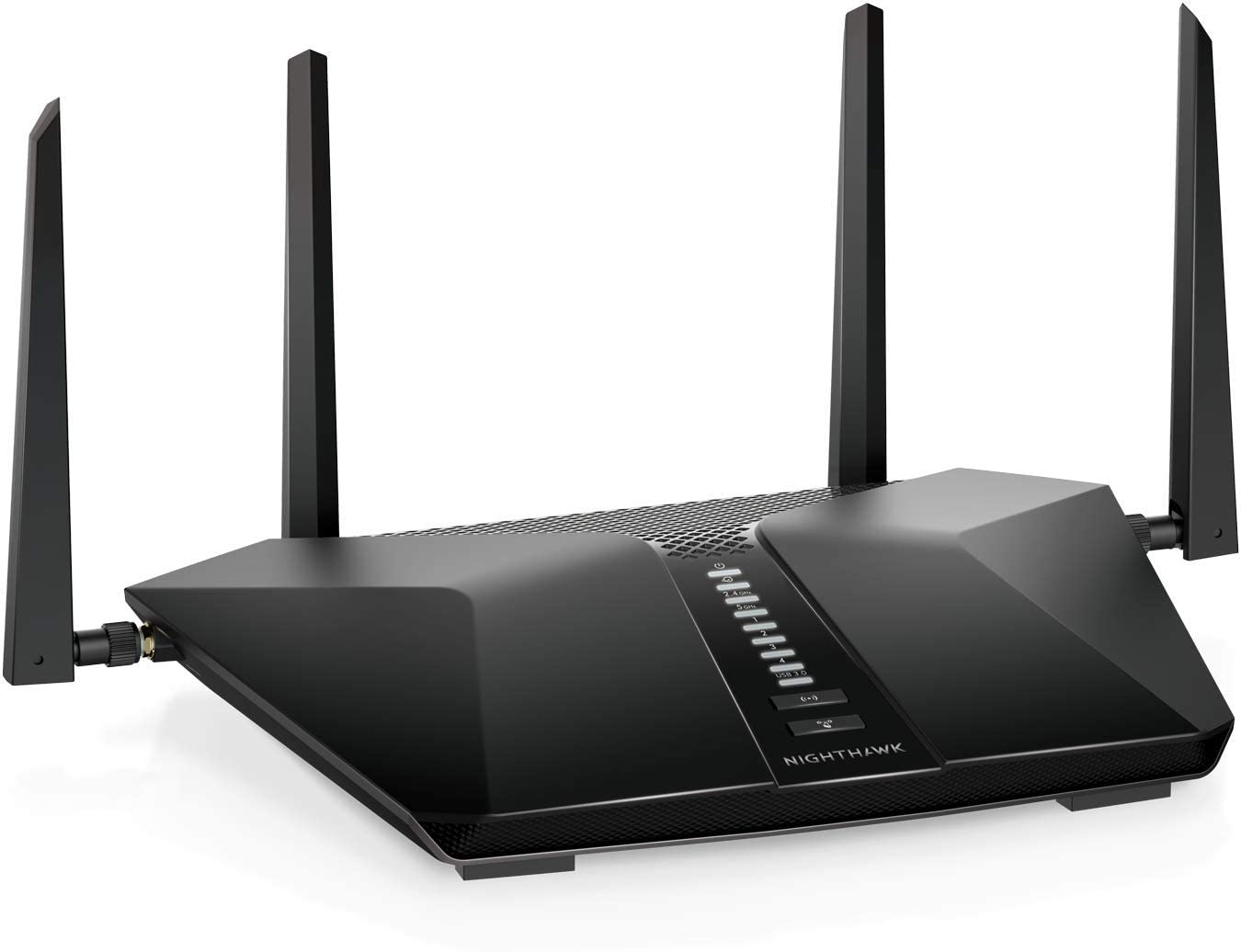 The company doesn’t break down its maximum speeds between its three bands, but says it can push up to 5.4Gbps (Gigabytes per second) of data, which which means you can max out almost any internet plan available right now. The router has a maximum coverage area of up to 2,000 sq. ft., and supports beam forming, which is a technology that allows the router to prioritize the direction it sends its signal base on where your gadgets are.

You can set up the AX5400 and control its main functions through the Nighthawk app (iOS and Android), which is also where you’ll find some advanced security options. The router supports WPA 3 as part of the WiFi 6 standard, but you can pay $4.99 per month for the ability to filter websites, view web history, and control an individual device’s ability to use the internet. You can also opt to subscribe to NETGEAR Armor ($69.99 per year), which adds an extra layer of antivirus protection.

The AX5400 is a great router overall, but it’s important to think about the fact that it doesn’t support mesh networking. If you don’t mind its 2,000 sq. ft. cap, you should strongly consider this router.