If you’re warm at home and can’t crack a window because of the weather or allergies, or you’re overheating while on a walk or at your office desk, you need a USB Fan.

Unlike traditional fans, which are big, bulky, and need to be plugged into an outlet, the best USB fans are small, portable, and draw power from a USB port. You can plug them into your computer, a power bank, or even your car’s cigarette lighter if you have the right adapter.

USB fans are less powerful than a full-sized fan, but that’s to be expected given their size; still, it’s way better to have some way to cool yourself down instead of sweating and being uncomfortable.

We found some popular USB fans with an array of features that make them the best choice in different situations.

What You Need to Know Before Buying a USB Fan

There are many factors to think about when choosing the right USB Fan for you; below are the most important ones, which we considered while we were researching this list.

Size and Portability: All of the USB fans in our guide are under 10 inches tall — one is under five inches tall — and only one weighs more than one pound. Some have batteries built into them, which allow you to charge them at home, and take them anywhere.

Speeds: Our guide features USB fans that have up to four speed settings, so you can get the level of cooling just right for your situation.

Flexibility: Most of the USB fans we chose can be adjusted to ensure you get the proper placement for maximum exposure to the cool air — or less of it, if you don’t want a full blast.

This fan is the right choice if you want a basic, quiet fan for home or office desk use. It’s five inches tall, weighs just under a pound, and is made out of a strong, metal frame.

It has four blades instead of six, which TRUSTECH says reduces the amount of noise it produces, so you won’t disturb a desk mate or roommate. In terms of flexibility, the fan can be rotated a full 360-degrees, so you can point it toward you if you change your sitting position.

The base is curved in an L-shape, which allows you to hang it off the side of a cubical wall if you’d like. Two features this fan doesn’t have are battery power (it needs to be connected to a USB port at all times), or adjustable speed settings. If you plug it into a portable battery pack, you can use this fan anywhere, but that requires you to carry an additional accessory.

Pros: The fan’s four blades make it quieter than other options, and metal frame is very sturdy.

Cons: It’s a little heavy, and only has one speed setting. 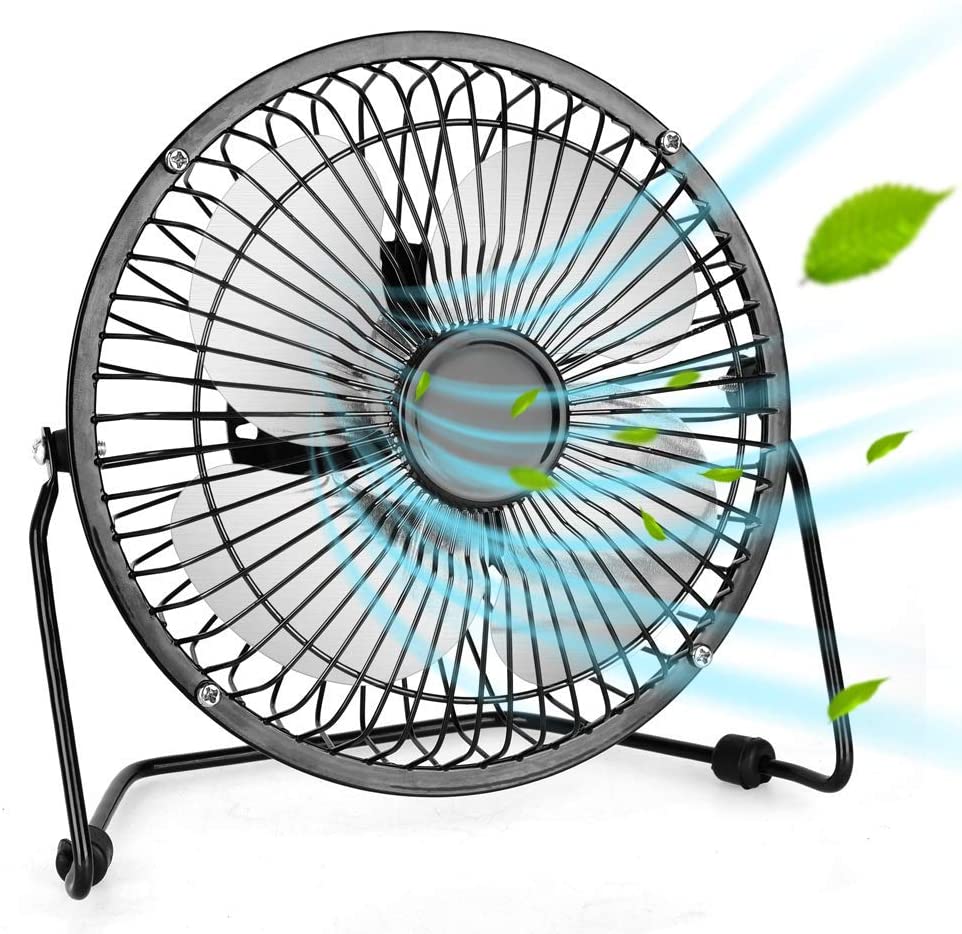 If portability is your greatest concern, this USB fan is the right choice. It weighs under half a pound, and is only 4.5 inches tall — the shortest on this list. Its base can be adjusted to sit on a surface like a desk or table, or extended to make it easy to hold.

The fan has three speed settings: low, medium, and high, so you can adjust its intensity. It does have six blades, which means it may be a little louder than some of the other fans we recommend, but you may not notice if you use it outside.

This fan does use a rechargeable battery, so you can plug it in at home, and take it with you on the go. VersionTECH doesn’t specify how much power it can hold. Because of that, we recommend charging this USB fan before you leave the house.

Pros: It’s lightweight, height-adjustable, and can run on battery power.

Cons: The company doesn’t say how much power the battery can hold, so you should charge it as often as possible. 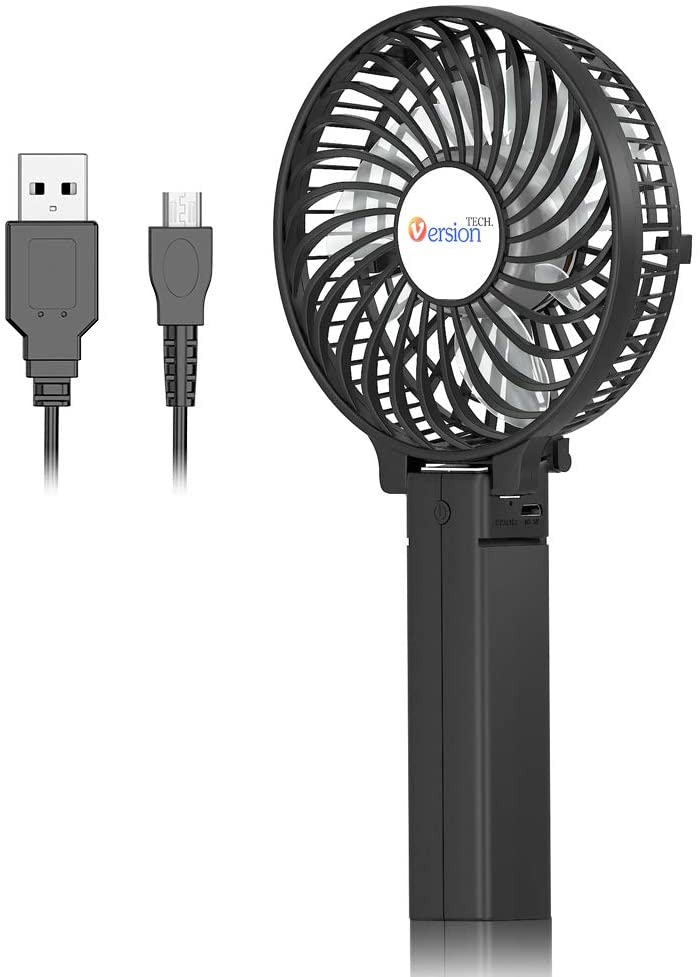 If you need a USB fan to cool down a challenging place, like the backseat of a car, this one is your best bet. It’s six inches tall, and 6.4 ounces in weight, which makes it the lightest choice in our guide.

While it’s not the shortest, you probably won’t use it at its full height because of its marquee feature: an ultra-flexible base. This USB fan doesn’t have a metal or plastic frame; rather, it stands on three, tripod-like arms that can be wrapped around any thin surface. This allows you to securely attach it to the headrest of a car, side of a beach chair, or treadmill.

The fan has four speed settings, which rotate the blades between 2,400rpm (rotations per minute), and 4,000rpm. It has a 2200mAh battery, which the company says can last between two to eight hours depending on your speed setting.

Despite using six blades, this fan produces less than 57db (decibels) of noise, which is roughly the volume of a quiet to moderate conversation. The fan will be less noisy on lower settings.

Pros: Its highly flexible design allows you to use it in places regular USB fans can’t go. 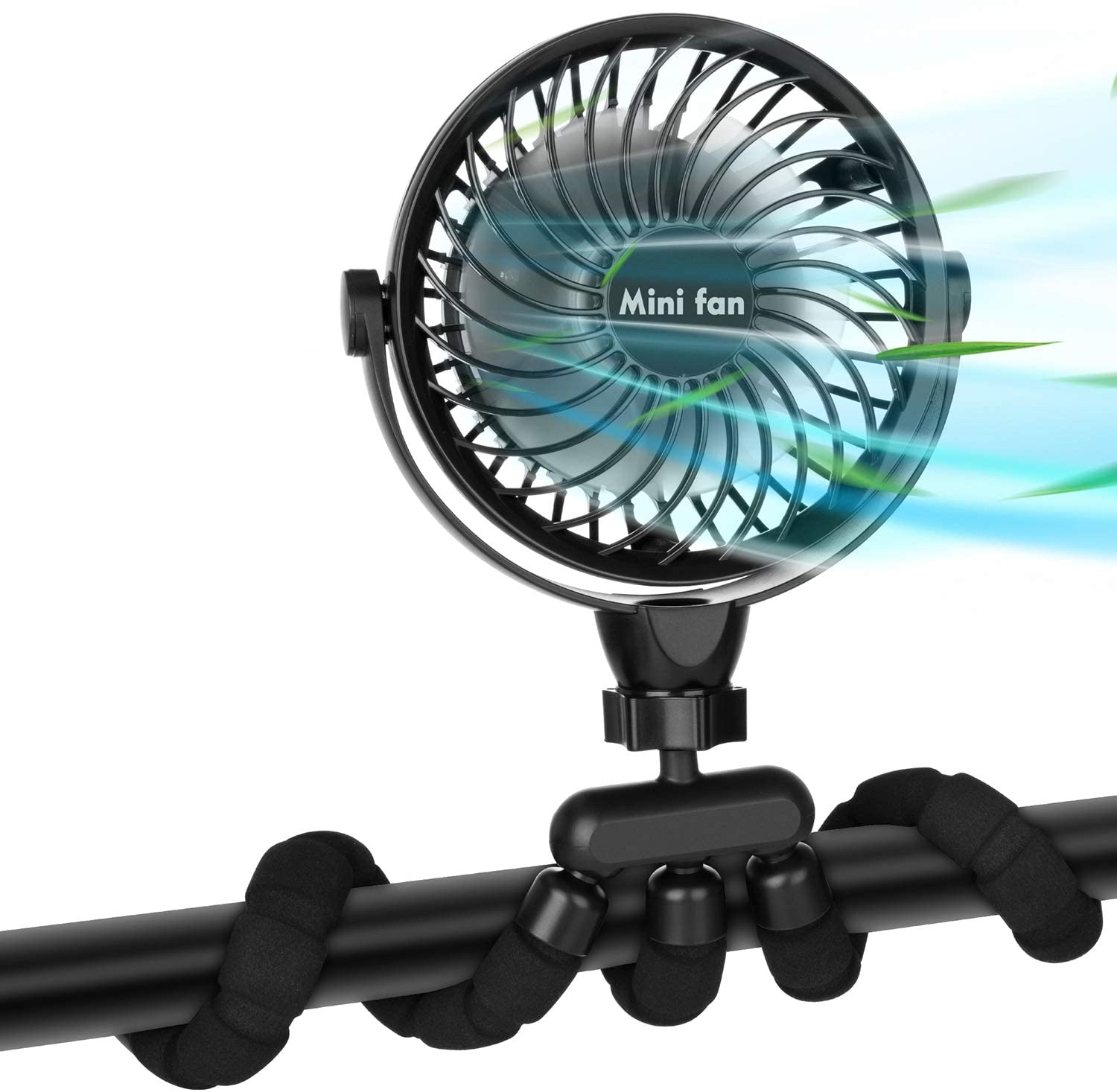 This USB fan is the luxe choice if you don’t want to keep your portable fan plugged in all the time.

Its standout feature is a 10,000mAh battery, which the company says can last between six and 24 hours on a single charge. The fan’s battery life will be determined by which of its four speed settings you use.

Energy-saving mode is the most efficient choice; it cycles between 1350rpm (the lowest speed), 1750 (the medium setting), and 2150rpm (the highest speed). This isn’t the fastest-spinning battery-powered fan in our guide, but you can’t argue with the additional battery life.

The larger battery also contributes to this USB fan’s weight: at 1.8 pounds it’s not heavy, but it’s a lot weightier than other fans in our guide. It’s also the tallest fan we recommend at 9.8 inches. The additional height was required to support this fan’s three blades, which are eight inches long.

In terms of portability, this fan’s battery is balanced out by its height and weight. It has a clip-on base, which allows you to clamp it to a stable, desk, headboard, treadmill, or troller, though. When clamped, its weight won’t be noticeable, but the larger gusts from its big fan blades will be.

Pros: This USB fan’s large battery allows it to run for up to 24 hours on a single charge, and its eight-inch blades will move a lot of air pretty quickly.

Cons: It’s heavier and taller than other fans in our guide. 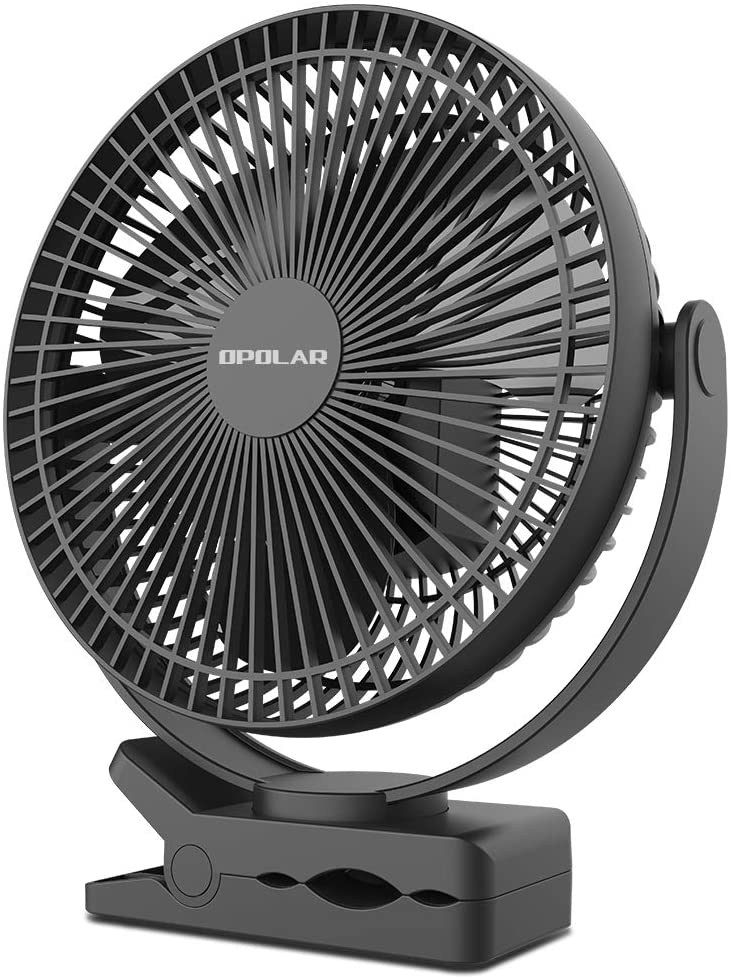