A lot of things go into making your turntable and record player sound its best, and a good turntable pre-amplifier (a.k.a. a turntable preamp) is one of them. But not all preamps deliver the same results. And while many record players come with a built-in preamp, it might be worth swapping it out for something a little more customized to your sound.

What Is a Turntable Preamp?

A turntable or phono pre-amplifier (sometimes called a phono stage) is a small device that lets you connect your record player to a sound system, receiver, or even a digital audio workstation (DAW). It takes the phono output signal from your turntable that’s generated by the stylus, and turns it into a line-level signal, amplifying and re-equalizing it to play out of your main speakers, just like any other audio source.

If you’ve already got a vinyl collection that you want to get the most out of, or are looking to start collecting, a preamp is an invaluable addition to your entire audio setup. Even if you’re a casual listener, a preamp can make a world of difference, and present a whole new appreciation for your old favorite albums.

There’s a chance your turntable already has a preamp built-in, so be sure to check before purchasing one, though a separate unit specifically built for conversion is most likely going to be of a higher quality than the factory-installed one on lower-end players.

But just like with turntables, all preamps aren’t created equal, and there are a wide range out there to choose from.

RS Recommends: The Secret Hack to Get a Canon Digital Camera Right Now for Just $259

What Makes a Good Turntable Preamp?

Gain: Gain is a measurement of the power or amplitude of a signal from the input to the output port. A gain control lets you set the strength of this signal, and it’s the first stage that the sound travels through. It can also be known as drive, since it’s literally measuring how hard you’re driving the signal. It is often used in tandem with volume, but it’s not quite the same: gain measures the amplification of the input, while volume is the output.

Headroom: Imagine headroom as kind of a buffer zone of dynamic space to allow for any unexpected and overly loud noises, like popping or clipping. It’s an indicator of how much signal a system can handle before it exceeds the levels it was meant for.

A higher-end preamp will most often have more headroom than lower-priced models, with a max output measure in the upper ranges of dBu (unloaded decibels). With this, you’re less likely to get unwanted effects like distortion. A lower-end preamp will still get the job done, but have way less headroom, ultimately affecting the overall sound.

Materials: A good phono preamp is an investment, so make sure it’s built to last. Besides durability, a metal frame can cut down on unwanted vibrations during play, and gold-plated jacks can prevent corrosion over time. A USB output port can also be helpful if you’re looking to transfer your record’s tracks to your computer, or isolate the signal chain from interference.

Tubes: Some preamps work with bulb-looking lamps known as tubes. These create a rounder, fuller, warmer sound, but are typically way more expensive when it’s a real authentic one. Getting the best sound out of a tube preamp really depends on the type of speakers used too, while they also require more upkeep and maintenance, as the tubes sometimes need to be replaced. Tubes also take some time to warm up before you can start playing your records and feeling their full effect.

Other Controls: Dip switches and knobs can be used to set things like trim, impedance, filter, volume, mix and monitor levels. But the array of options on preamps is all over the place, with some sticking to the bare minimum.

It’s also important to check and see whether you’ve got a moving magnet (MM) or moving coil (MC) cartridge, and if the preamp you’re looking at can be used with it. Cleaning your records before use can also cut way down on static and crackling.

Turntable preamps prices vary depending on build quality, parts, and lots of features, often stretching upwards of $10,000. But for those who just want to enjoy listening without spending your life savings, these will let you hear your LPs in a familiar but whole new way.

Anyone who’s tried Cambridge Audio’s other products, like their Melomania Touch earbuds, knows that this is a company that’s had a true passion for high-quality sound since 1968, and strives for the best listening experience possible.

While some preamps are entirely too sensitive, picking up up every little flaw in the record, the Alva Duo seemed to brush right over the imperfections without affecting the music much at all.

The smooth, sleek and minimal Alva Duo works with both MC and MM cartridges, with labeled inputs for both, sending a strong signal with a bright, clear “British” sound, and a warm, crisp feel. It’s lightweight enough to sit on your setup, while still having a build that’s solidly constructed.

This is especially great for anyone breaking out their old record collection, or inheriting crates from a friend or relative. The Duo’s subsonic filter and balance control are calibrated to keep low frequency rumbles and damage  to a minimum, so your ears can focus on what’s really important.

There’s also an integrated headphone output with its own volume control, but this works best on speakers.

That’s not a reflection you’re seeing – the Vincent is a double decker unit that features one level as the power supply, and the other as the phono stage.

The PHO 8’s sound is warm and well-balanced, with a dynamic punch that works on both MM and MC, with the ability to switch between them. RCA inputs and outputs line the back, and unwanted noise is kept to a minimum. Sound is crisp and full, but if you think the bass isn’t boomy enough, replacing the power cord can clear that right up. 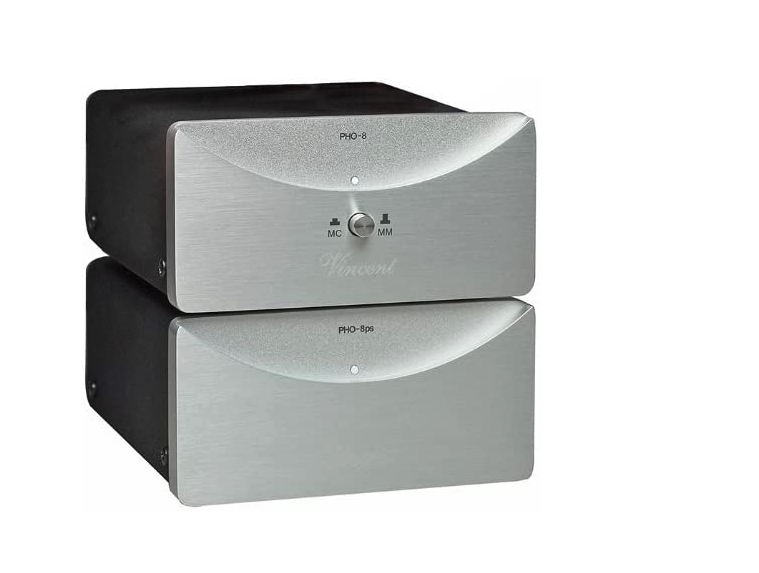 The Mani is a pretty amazing little preamp, and weighs in at just about one pound. Despite its small stature, the sound from it feels grandiose and wide, with unwanted noise at a consistent low to keep your songs at the forefront instead of annoying crackling and hissing.

It works with both MC and MM, and has four selectable gain mode switches on the bottom. The build quality feels tight, and is constructed with an aluminum case and gold-plated connectors too. 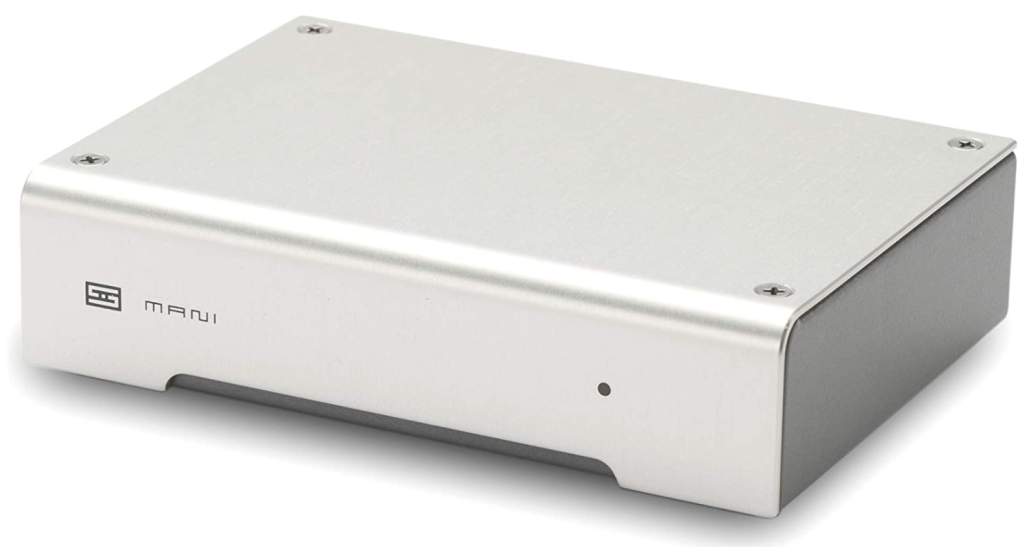 The Little Bear can keep up with some of the bigger bears here with impressive audio quality for its size and class.

The first thing you’ll notice are the tubes, though they are more of a visual aesthetic than actual authentic ones. Illuminated by orange LED lights, they help buffer the incoming audio, but the JRC dual-channel op-amp inside does the heavy lifting of amplifying the signal here.

There’s also an AUX input on the front, which lets you gets similar sound from another line-level source. And at about half a pound, it’s by far the lightest of the bunch.

This is for MM turntables only (sorry MC owners), and there’s a gain control, but it’s inside the unit, so you’ll need a screwdriver or paperclip to switch it. The grounding can be a bit shaky too, picking up other signals and noises, but in the right spot, it keeps hum to a low.

All that being said, the sound can strike you as full and rich, with a soft edge. For newbie vinyl enthusiasts, this is a great one to start out with. 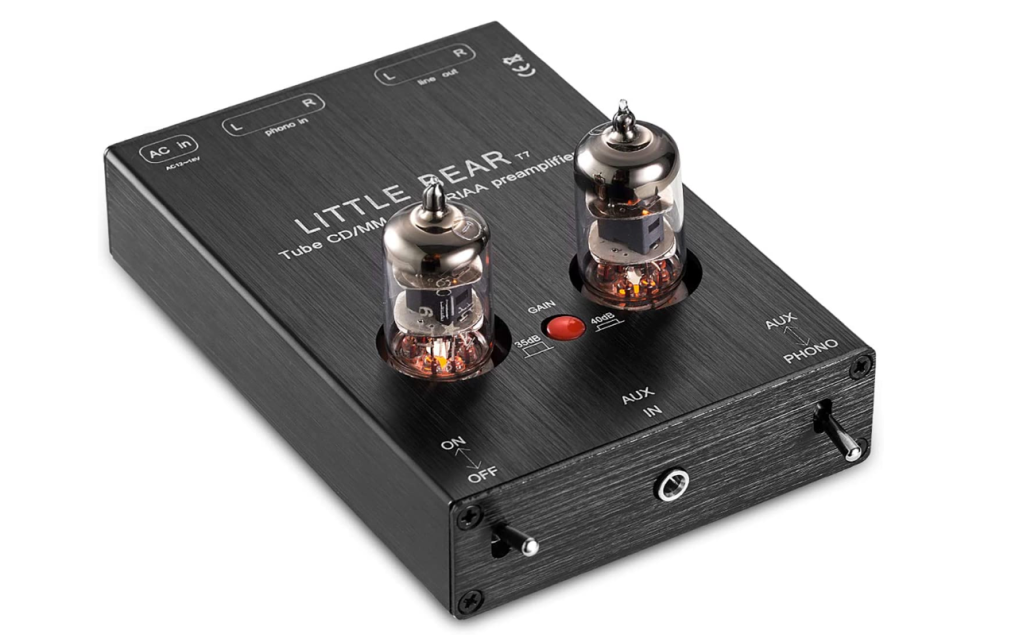