The best smartwatches can do everything from monitor your health stats to deliver your texts and incoming calls straight to your wrist, allowing you to always be on top of everything. Plus, they’re extremely customizable with editable displays and changeable watch bands, which keeps even year-old smartwatches looking and feeling new.

If you’ve still not joined the smartwatch bandwagon and are looking for an easy way to invest in one, we’ve gone ahead and rounded up the best smartwatch deals available online right now, including the best Prime Day Early Access deals. Shop smartwatch deals from brands like Apple, Samsung and Garmin and see their latest sale prices down below.

What Are the Best Smartwatch Deals?

The best smartwatch deals overall will be on last-generation smartwatches — think the Apple Watch SE and Samsung Galaxy Watch 4 — but you can find a ton of great smartwatch deals on newer wearables too. There are smartwatch deals available on all sorts of brands and we’ve listed some from Apple, Samsung, Amazfit, Garmin, and Fitbit right below. 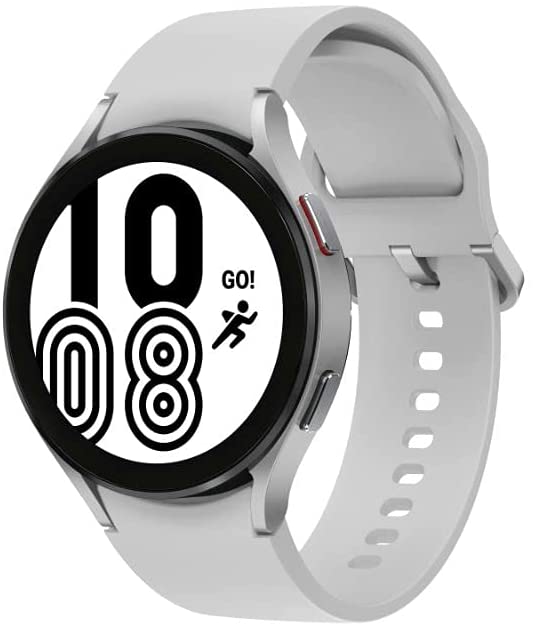 This sleek wearable offers a bunch of health features, including EKG measuring, sleep monitoring as well as measuring your blood oxygen levels. It will also track your favorite workouts, like running, cycling and even swimming — yes, this Samsung watch is water-resistant for up to 30 minutes.

These Soundbar Deals Prove That Cinema-Like Audio Can Be Affordable

You’ll also be able to use this Samsung Galaxy Watch with both Android and Apple smartphones, although we recommend going with the Apple Watch if you’re an iPhone user. 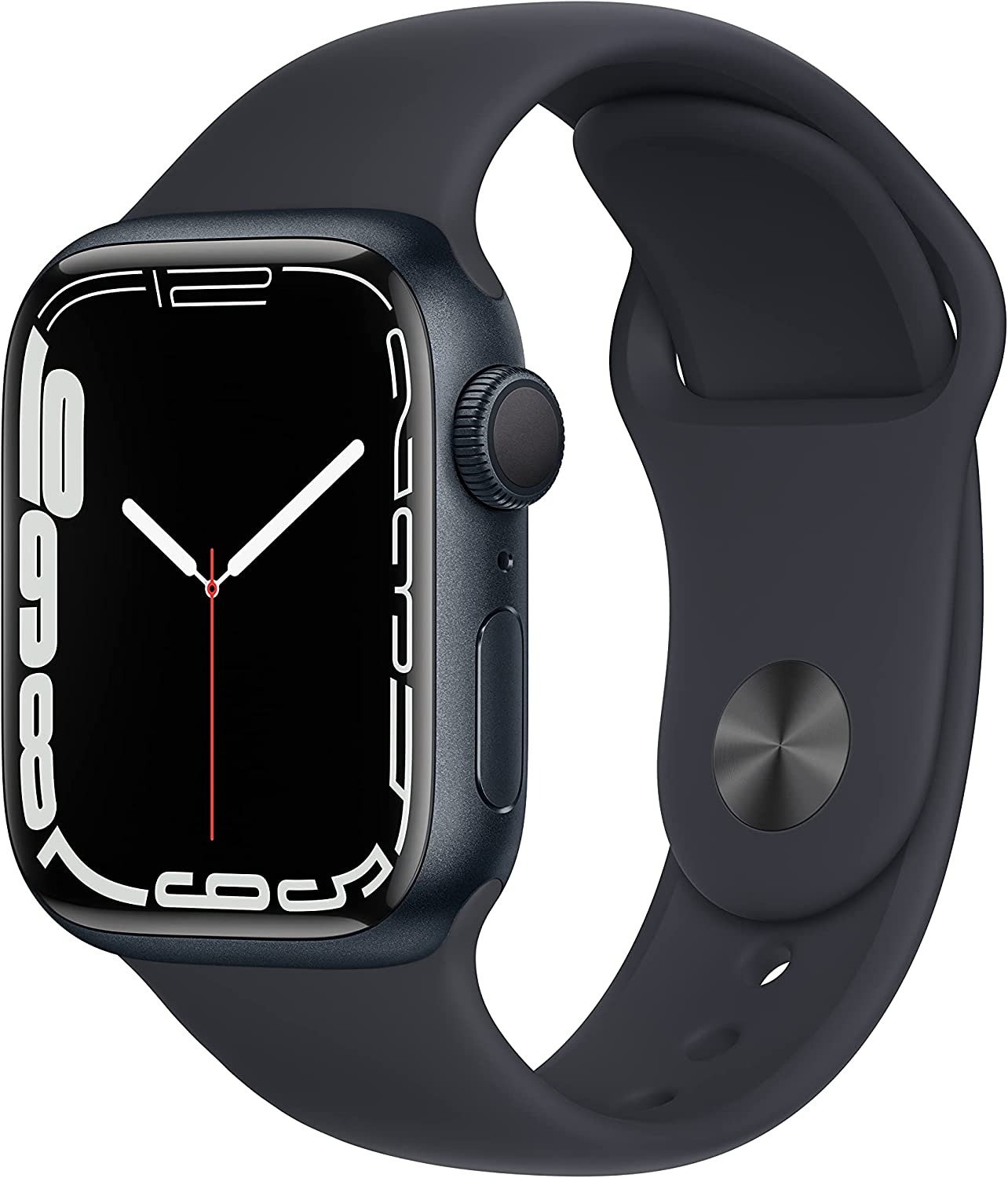 The Apple Watch Series 7 has a similar wide screen and design to that of the Series 7 and right now you can grab this smartwatch deal starting at just $319 (originally $399) — 20% in savings.

The always-on retina display is sharp and clear and can be customized to your liking. Health features are similar to that of the Samsung Galaxy Watch 4, with options for EKG measuring, blood oxygen level monitoring and sleep tracking.

The fitness app is probably this smartwatch’s best feature as it can automatically track most workouts including walking, running or cycling. Plus, you can manually track any other workout you want, including barre, kickboxing and strength training, amongst others.

Connect it easily to your iPhone as well to receive texts, calls and calendar notifications straight on your wrist. You can’t really use this Apple Watch with an Android smartphone though, so pick another smartwatch deal on this list if you don’t own an iPhone. 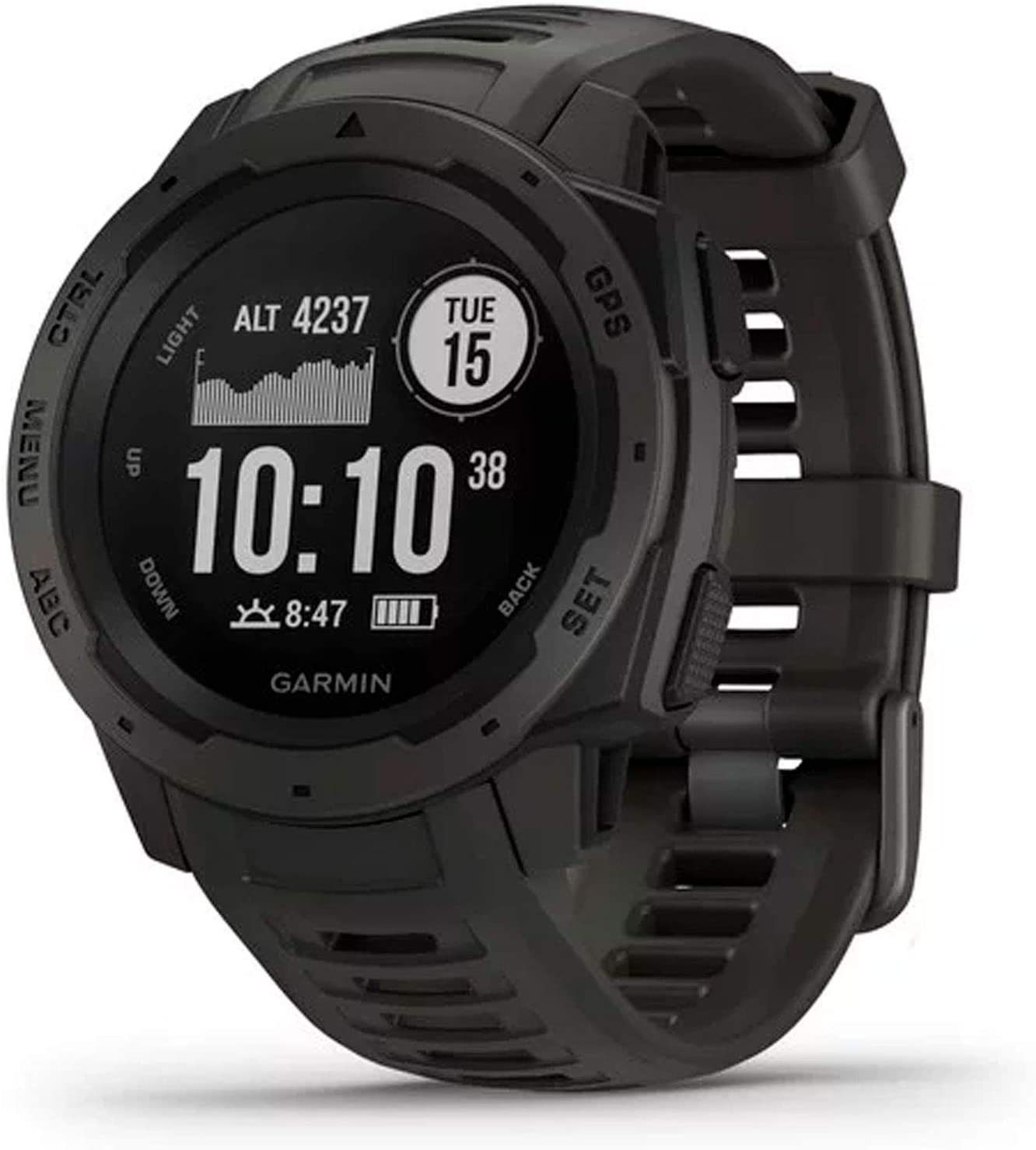 In need of an outdoorsy watch? Go with the Garmin Instinct, now on sale for $174, down a whopping 30% off its original price of $249.99. It’s one of the best smartwatch deals on this list.

This rugged smartwatch was built to withstand the elements, including water resistance up to 100 meters as well as thermal and shock resistance. You’ve also got a compass, barometric altimeter, and GPS built-in, so you’ll never lose your sense of direction.

Battery life is extremely long, running up to 14 days on the most basic settings according to the brand. Plus, it’s compatible with both Android and Apple iPhones, making this a great option if you want a more versatile smartwatch. 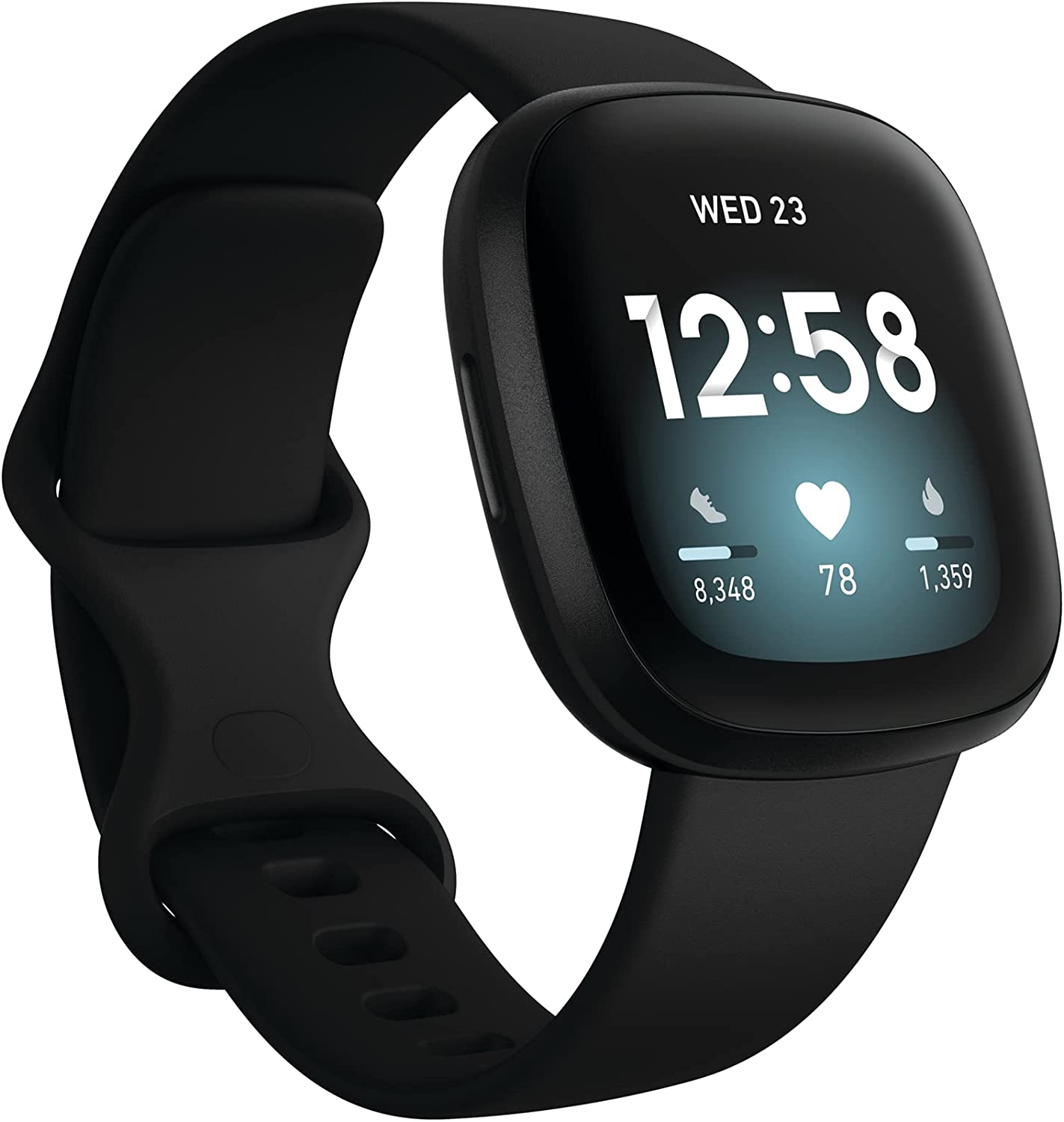 The Versa 3 can do everything from tracking your calories and heart rate (not EKG though) to checking on your nightly blood oxygen levels. There’s sleep tracking too and both Amazon Alexa and Google Assistant built-in for easy voice assistance.

Battery life runs more than six days according to the brand, and you’ll be able to connect it to either iPhone or Android smartphones for on-wrist notifications 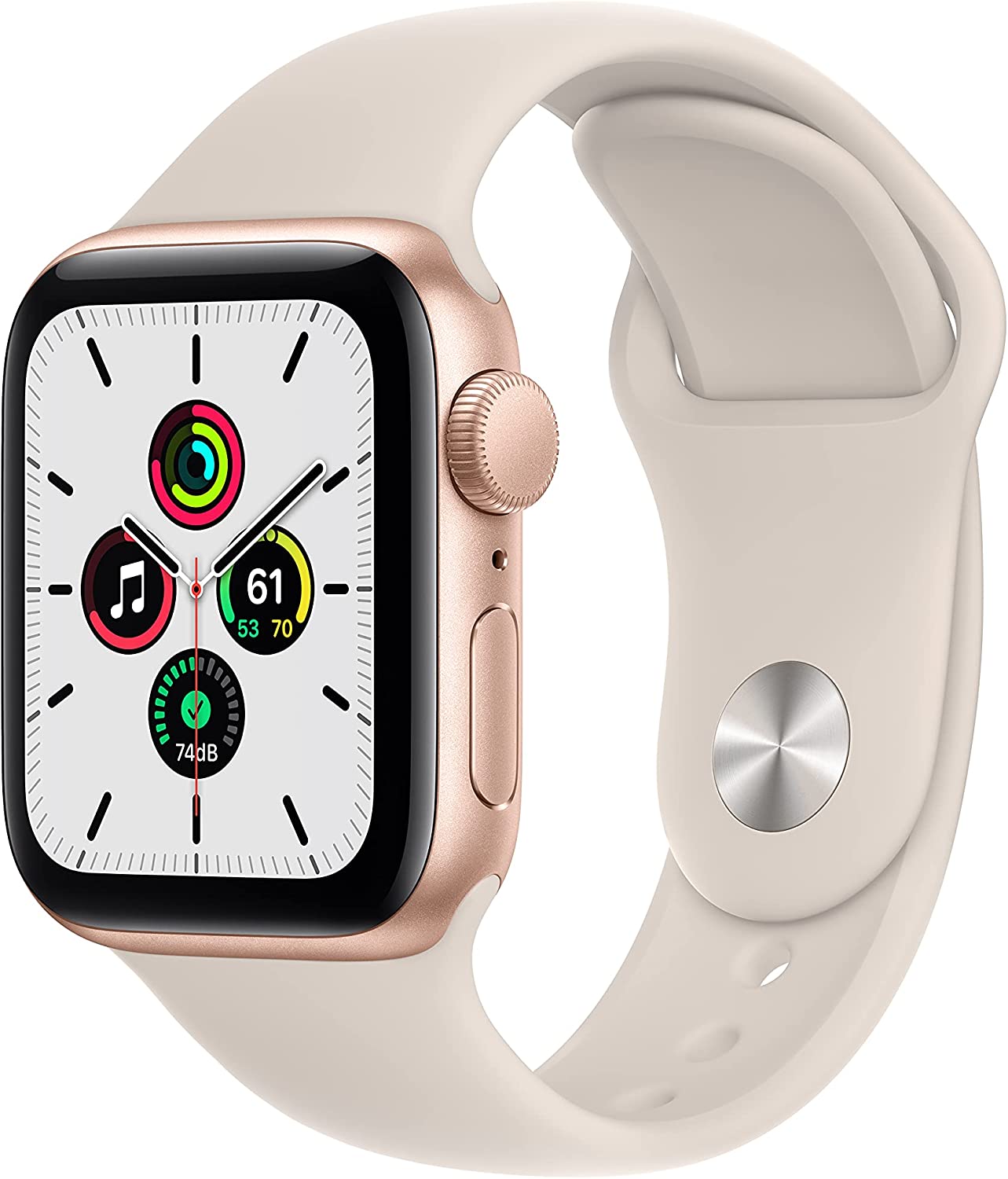 For a starter Apple Watch, go with the Apple Watch SE, which packs some of the best features of newer Apple Watches at an even lower price. Plus, right now it’s featuring a major smartwatch deal, down to just $199, saving you almost 30%.

Track your workouts, check your heart rate or monitor your sleep schedule with the Apple Watch SE (you won’t be able to check your blood O2 levels through).

The retina display is gorgeous too and similar to more expensive Apple Watches, you can easily connect your iPhone and receive your social media notifications straight on your new smartwatch. 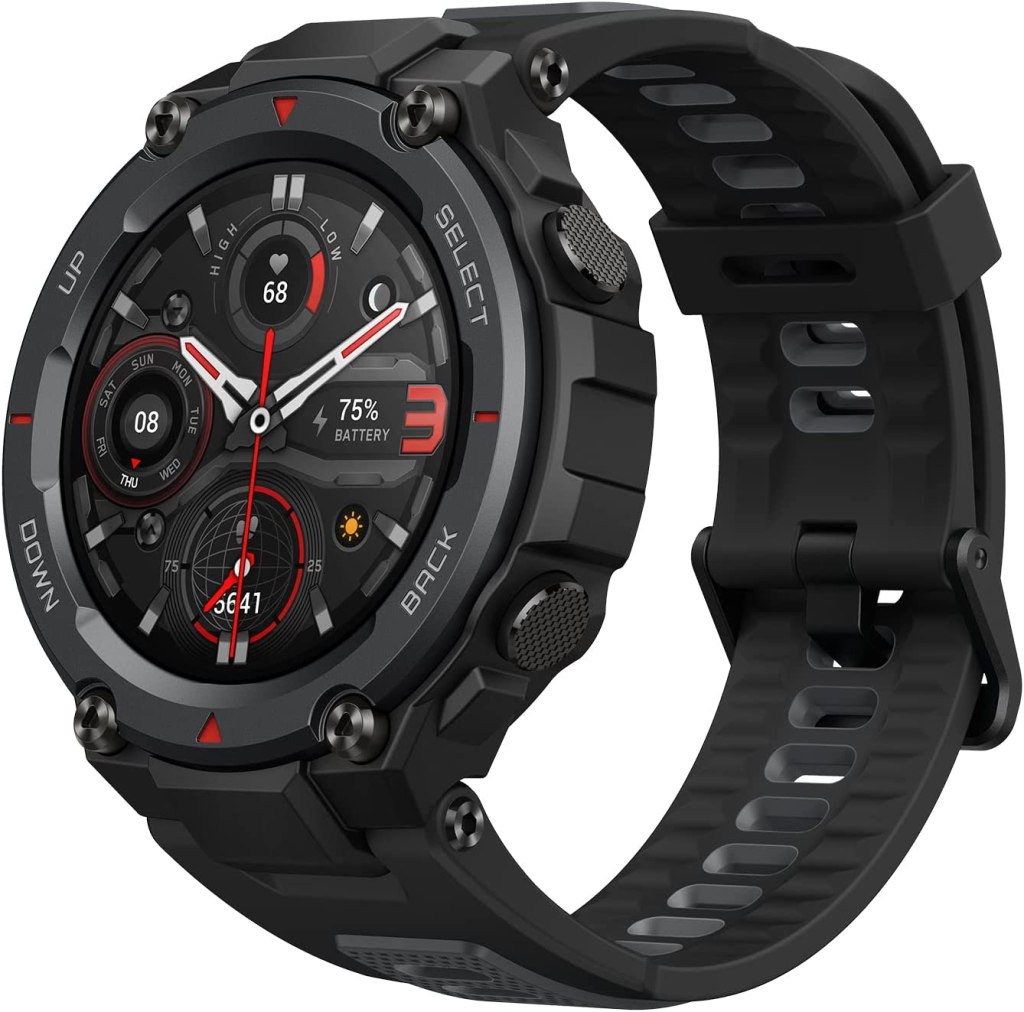 This rugged smartwatch comes with an AMOLED display and has passed 15 military-grade tests, according to the brand. this means your new smartwatch can withstand extreme conditions including hot and cool temps.

Battery life lasts up to 18 days and the watch build is even waterproof. There are over 100 sports modes available too, allowing you to track your calories and heart rate while you walk, run or hike.