Appliances can save you a lot of time in the kitchen, and are even necessary to prepare some dishes, but they require a lot of counter or cabinet space.

Portable versions of those same kitchen tools, sometimes referred to as handheld appliances, offer similar benefits but take up far less space. This makes them a better choice if you live an in apartment, or want to cook at an Airbnb, friends home, or campground.

Some portable appliances are cordless, which means they run entirely on battery power, and only need to be recharged after a few hours of use, but this isn’t always the case. We’re recommending a mix of cordless and corded appliance, with the caveat that they need to be small enough to fit comfortably in a backpack.

If you’re an ambitious home chef who’s been held back by a small kitchen, or frustrated when cooking in another person’s kitchen, these are the portable appliances you need. 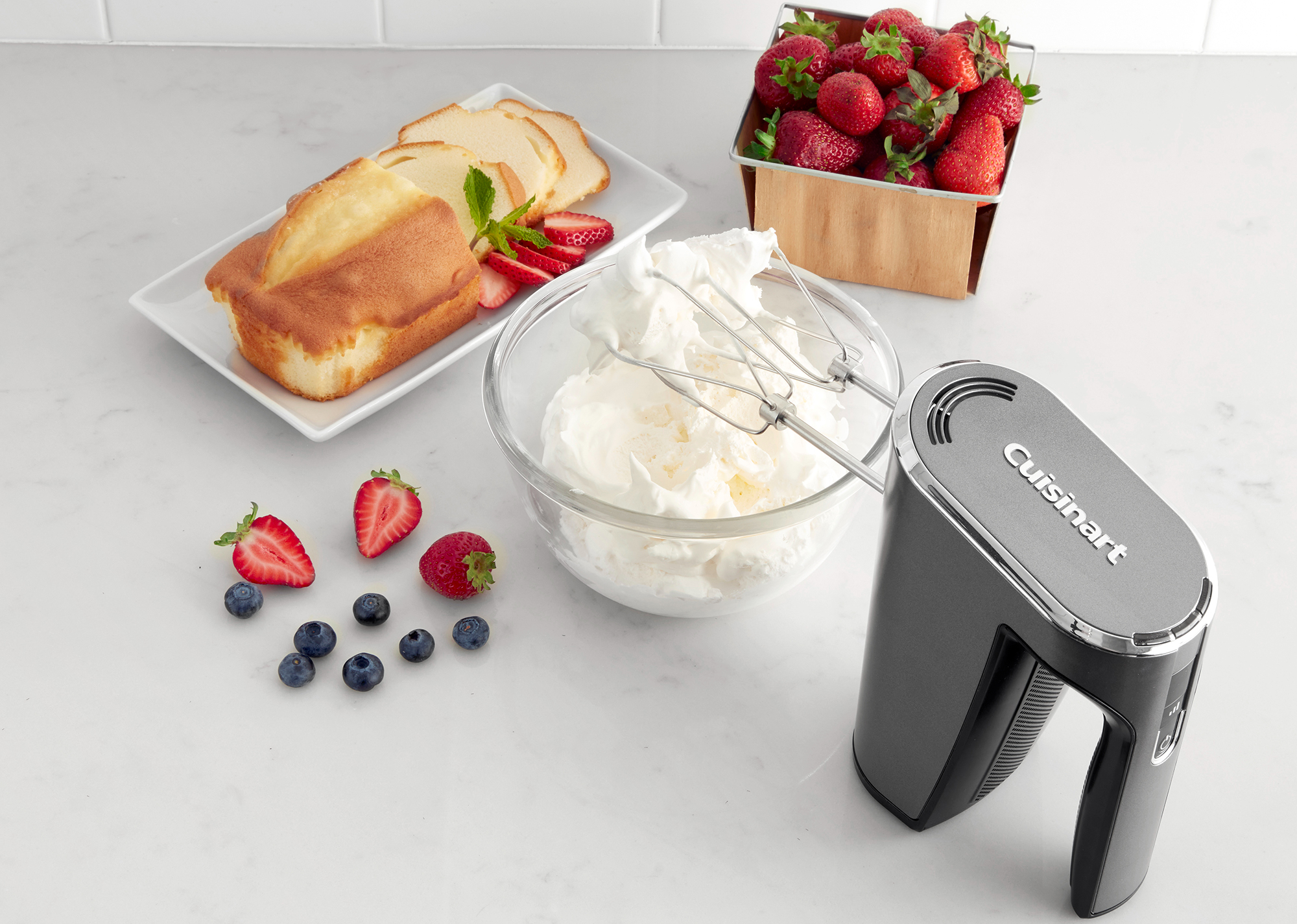 Cuisenart’s EvolutionX Cordless Hand Mixer is a must-have appliance for any baker in a small space. In our tests, the mixer made quick work of batters, combining ingredients with ease without splattering them all over the place.

The EvolutionX has five speed settings, which you can switch between by pushing one of its two buttons (the other one turns it on and off). These speed settings provide a satisfying amount of control, and the mixer was always powerful enough to handle the job.

Speaking of handles, we were especially impressed by the EvolutionX’s ergonomic design. Its handle had a satisfying amount of grip, and its button placement made it easy to control the mixer’s settings. If you’d like to cut down the amount of time it takes to make cupcakes, banana bread, or homemade whipped cream, Cuisenart’s EvolutionX should never be out of arm’s reach. 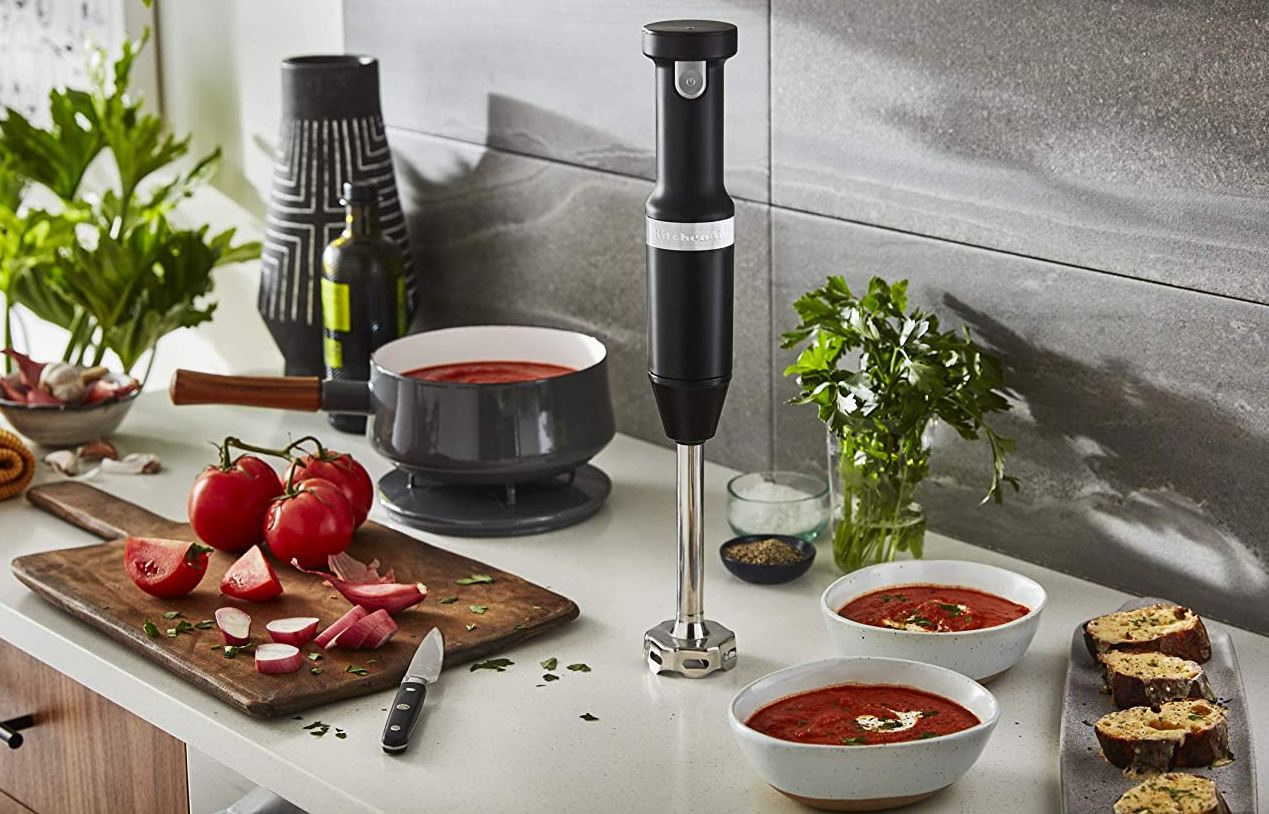 KitchenAid recently released its own line of battery-powered small appliances, and its Cordless Hand Blender is the best piece in the line.

We were able to smooth out chunky sauces and soups in seconds, and noticed no reduction in power compared to the corded immersion blenders we were used to using. Using KitchenAid’s Cordless Hand Blender was pretty simple: First, we attached its base (which holds its battery) to a bottom part that holds its blade. Next, we pushed its single power button. That’s it.

KitchenAid bundles its Hand Blender with a number of helpful accessories, including a whisk, 1000 ml container, chopper attachment. These tools make this immersion blender the best multi-use portable appliance in our guide. 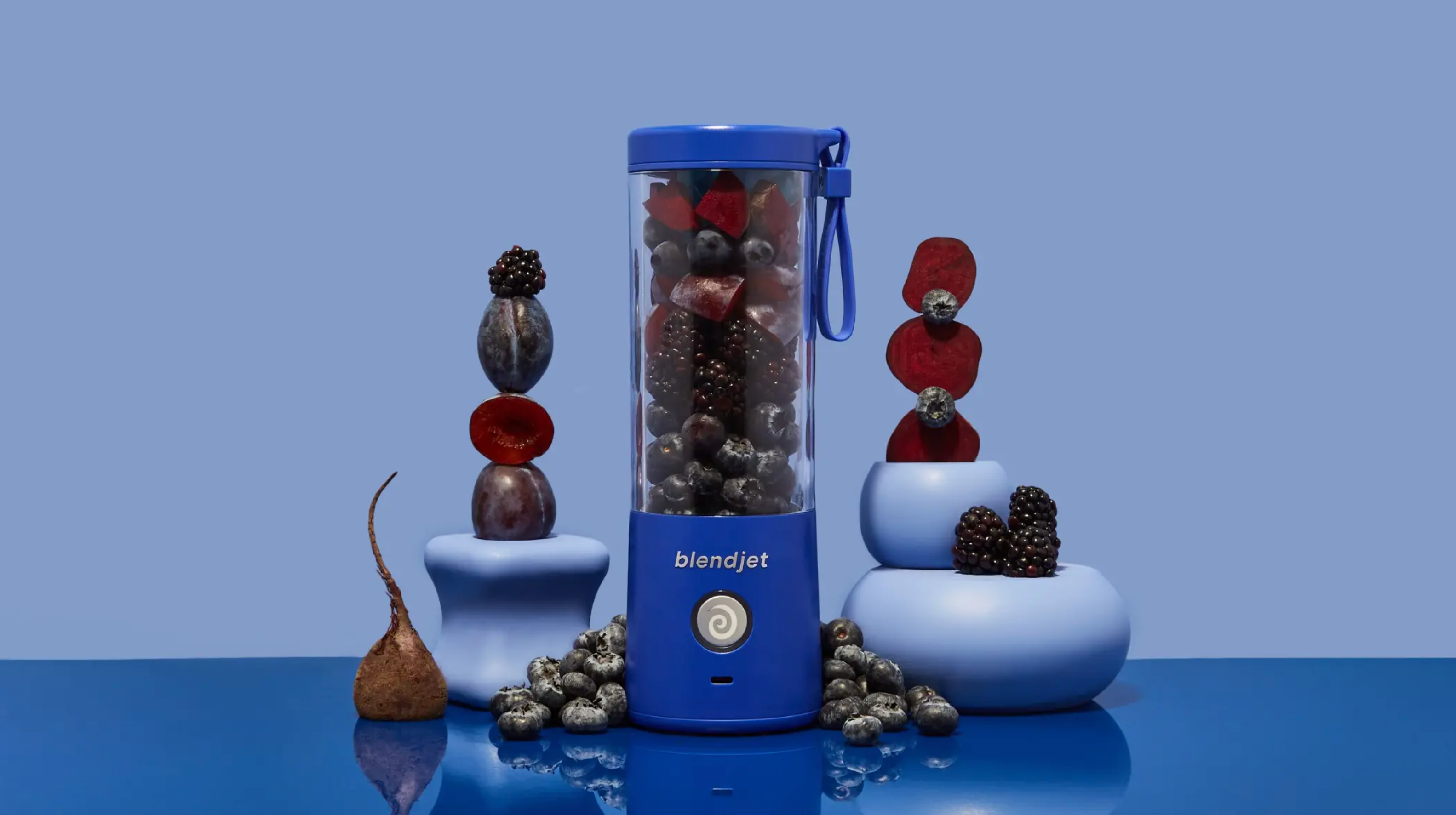 After testing it for ourselves, the Blendjet 2 may be the most impressive battery-powered appliance we’ve ever tried.

The portable blender was powerful enough to crush ice, frozen fruit, fresh fruit, vegetables, and liquid (either water or milk) into delicious smoothies within 30 seconds. The results were fairly smooth, but we recommend going through two blending cycles if you want absolutely no lumps. The only time the Blendjet 2 struggled was when we tried to blend chunky tomato sauce.

Operating the Blendjet 2 couldn’t be simpler: Just fill its container, secure its lid, and press the power button. The button will turn purple, and its blades will begin to spin almost immediately. We were skeptical that the Blendjet 2 would be powerful enough to make a quality smoothie on-the-go, but it absolutely delivered. 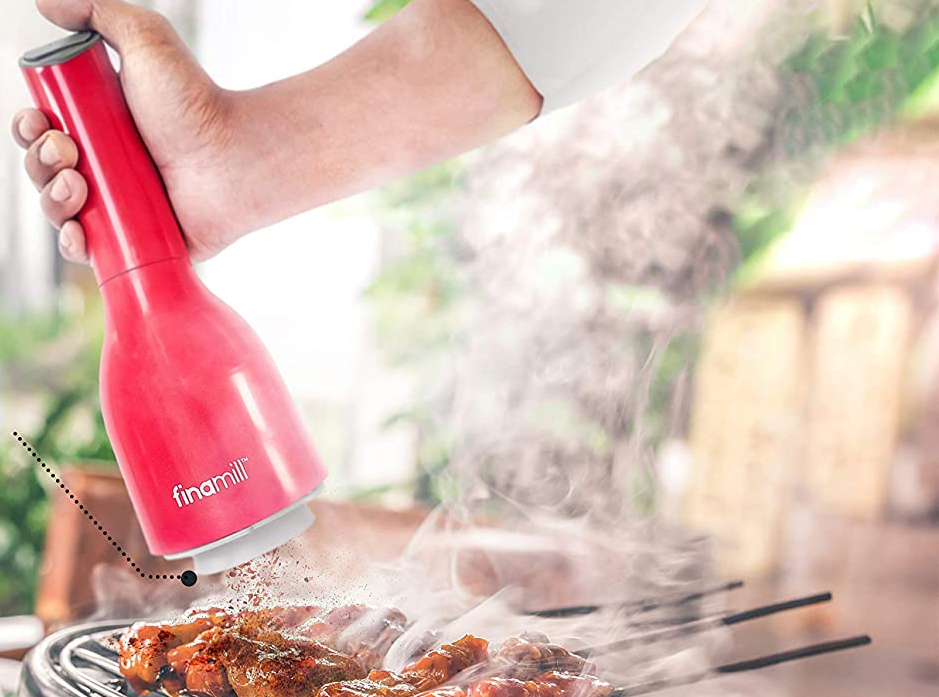 The FinaMill Spice Grinder is an essential battery-powered appliance for home cooks who make lots of savory dishes.

What sets the FinaMill apart from the competition is its unique design. The spice grinder comes bundled with two “pods,” which you fill with your whole spices of choice. Once the pods are filled, you attach them to the FinaMill’s battery-powered base and lock them into place. Gears in the FinaMill turn the blade in the pod, which grinds the spice inside.

This system allows you to switch between spices without having to clean the base. This design removes the most frustrating part about grinding your own spices and provides a convenient way to store the ones you reach for most often. Once you’ve ground your own peppercorns, cinnamon, and star anise, you’ll never go back. 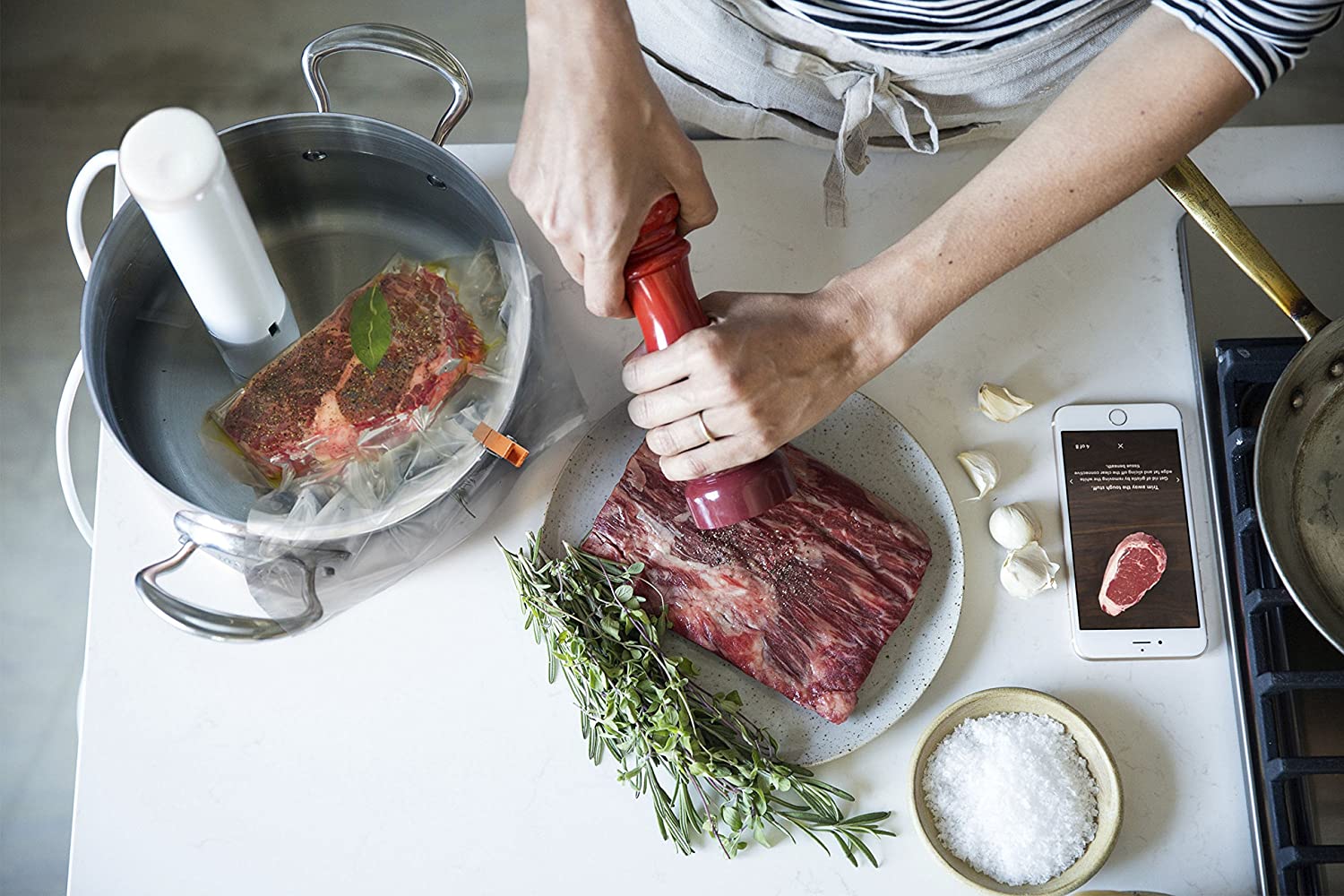 At its core the Joule is a water circulator, which heats liquid to a precise temperature, and keeps it there for extended periods of time. Sous vide cooking works by slowly bringing meat or vegetables up to that temperature without directly exposing them to a heat source like water or a pan. Instead, you submerge your food in an air-tight bag, so it never comes in direct contact with the water.

This may sound complicated, but the Joule simplifies it significantly. You can set your temperature using an app (iOS or Android), attach the Joule to the side of any pot, wait for it to come to temperature, place your food inside the water bath, and hit the “start” button inside the app. Your phone will buzz when your food is done, and all you’ll need to finish it is a quick sear to get a nice crust.

High-end restaurants have relied on sous vide cooking to produce perfectly-cooked meals for decades, but the Joule allows you to get the same results at home from a device small enough to fit in any drawer. 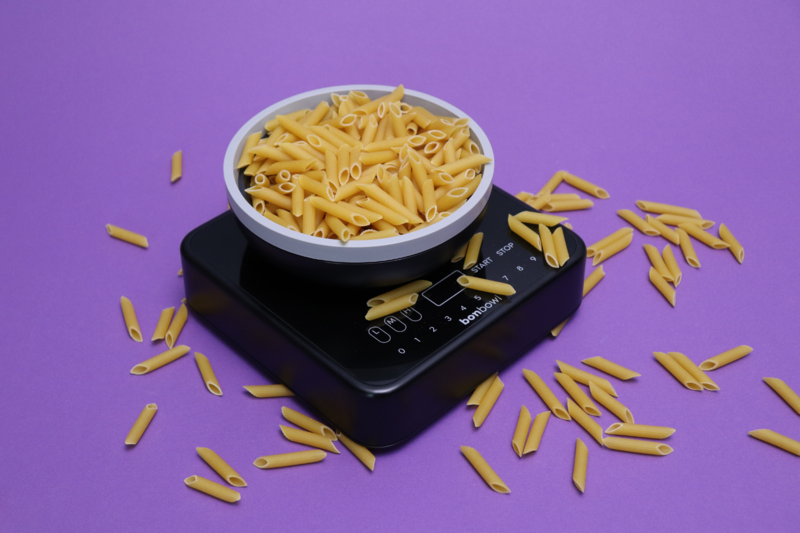 Bonbowl is a portable induction stove top that makes it easy to cook or reheat single-portion meals anywhere you go.

This appliance comes in two pieces: the electric induction “burner,” which has a heating element, and an 18 ounce bowl, which fits perfectly on top of it. We’ve tested the Bonbowl, and found it to be very intuitive to use considering how advanced this technology is.

We cooked pasta, eggs, and reheated leftover takeout by placing the ingredients in the bowl, selecting a heat level (low, medium, or high), setting a timer, and hitting start. The bowl heated up almost immediately, and cooked our food very quickly without requiring us to do more than stir.

The Bonbowl is not only the most efficient way we’ve found to cook a single serving of food, it’s also the easiest to clean. If you want a surefire way to cook homemade meals in a hotel room or dorm room, this is the small appliance to get. 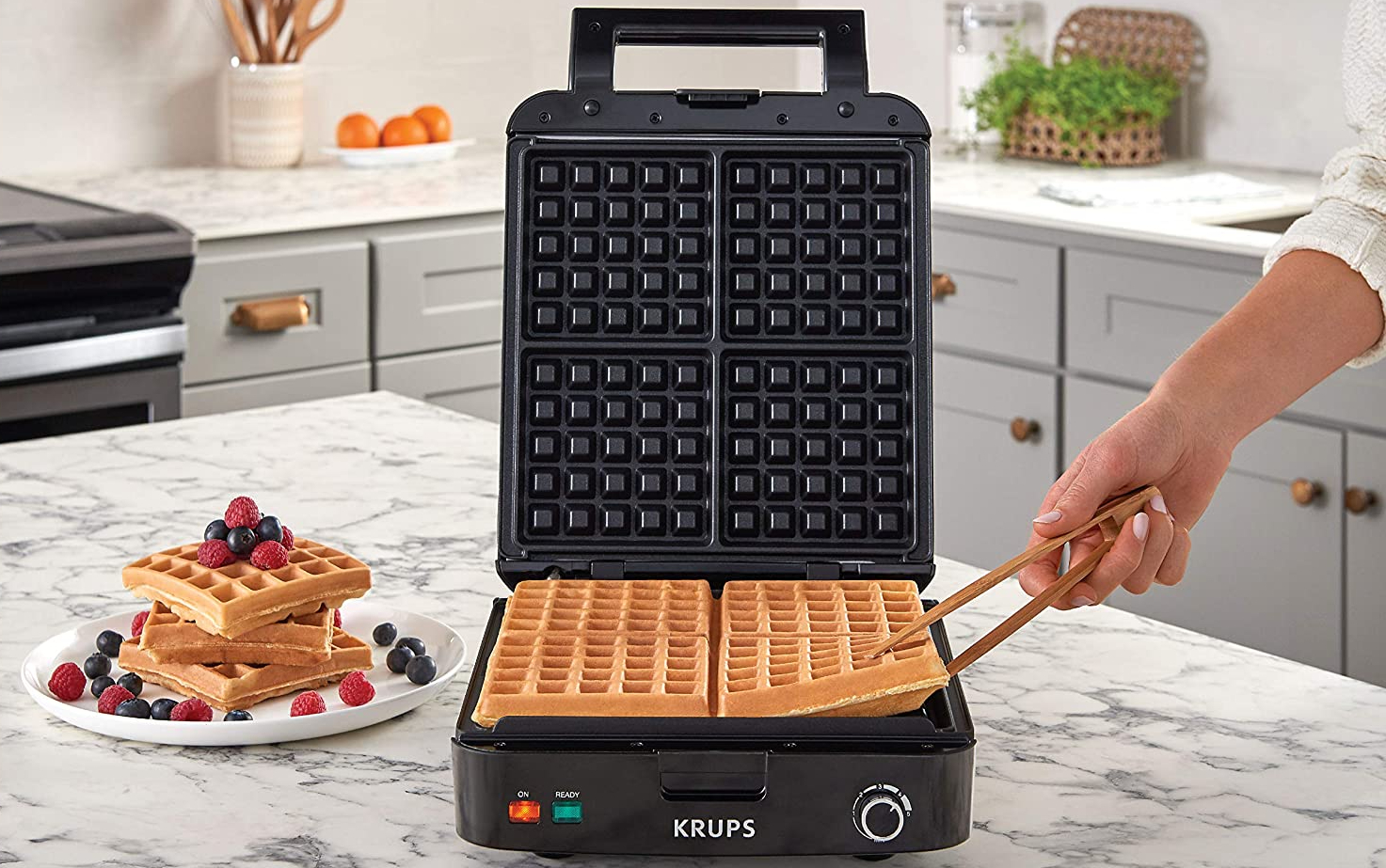 We’re generally skeptical of single-use appliances, but Krups’ Belgian Waffle Maker is a notable exception. We’ve tested it for several years, and have been able to make consistent, diner-quality waffles each and every time.

The electric waffle maker has no buttons, just a single knob on the right side that lets you select your preferred level of doneness between one (ultra soft) and five (crispy). In our experience, level four is the sweet spot.

This appliance makes four waffles simultaneously, and its non-stick grates make it easy to remove them once they’re done without applying cooking spray. The grates are removable and dishwasher safe, which makes them very easy to clean and maintain.

When it’s not use, Krups’  Belgian Waffle Maker takes up about as much space as a school kid’s lunch box. If you’re into brunch, it definitely deserves a space in your cabinet.