Since they were founded in 1969, Sony has been one of the largest electronics companies in the world (did you know is was Samsung, not Apple, that invented the first MP3 phone?). While you may be more familiar with their standout sound bars, their latest headphones of 2022 (and even their classic picks) are just as praise-worthy.

Related: What to Know About Samsung’s “Galaxy Unpacked” Event

The company continues to expand and innovate their audio lines, even acquiring Harman International Industries in 2016, best known for their Harman Kardon audio division. The best Samsung headphones deliver must-have features like active noise-cancellation, all-day battery life, and 360 Audio, which all elevate their headphones without sacrificing on good-quality sound.

We’ve found four pairs that stand out from the pack, and prove that less is more when in comes to stellar gear. You’ll find in many cases here that Samsung’s audio features go above and beyond offerings from competitors like Sony and Apple.

What Are the Best Samsung Headphones?

There are many factors to consider when choosing the best Samsung headphones for you; below are the most important ones, which we considered while we were researching this list.

Bluetooth vs. Wired: While all the Samsung headphones in this guide use Bluetooth to wirelessly connect to your phone, tablet, computer, or TV, that doesn’t mean that they don’t still have wired offerings. Samsung says their Type-C headphones in particularly separate right and left signals 10 times better than 3.5mm headphones.

Battery Life: It sucks to need to keep plugging in your charging case or constantly popping your headphones in to keep them working. That’s why for the purpose of this guide, we’ve chosen wireless headphones that get between six and 30 hours.

Weight: Samsung has a wide range of wireless earbuds, which weigh much less than a large, over-ear pairs, so we’ve made sure our heaviest recommendation is just over half a pound.

Active Noise-Cancellation: Some of the Samsung headphones have built-in support for ANC (active noise-cancellation) technology, which uses the headphone’s microphones to block out certain ambient noise frequencies. This feature can drain your headphones’ battery life faster, but you also won’t have to crank the volume when you’re out and about.

360 Audio by Dolby: While the Galaxy Buds Pro used to be the only wearables in Samsung’s line with 360 Audio, the company has added a software update that brings the tech to the Galaxy Buds 2 and Galaxy Buds Live. Using Dolby Head Tracking technology, the sound appears similarly to Apple’s Spatial Audio. 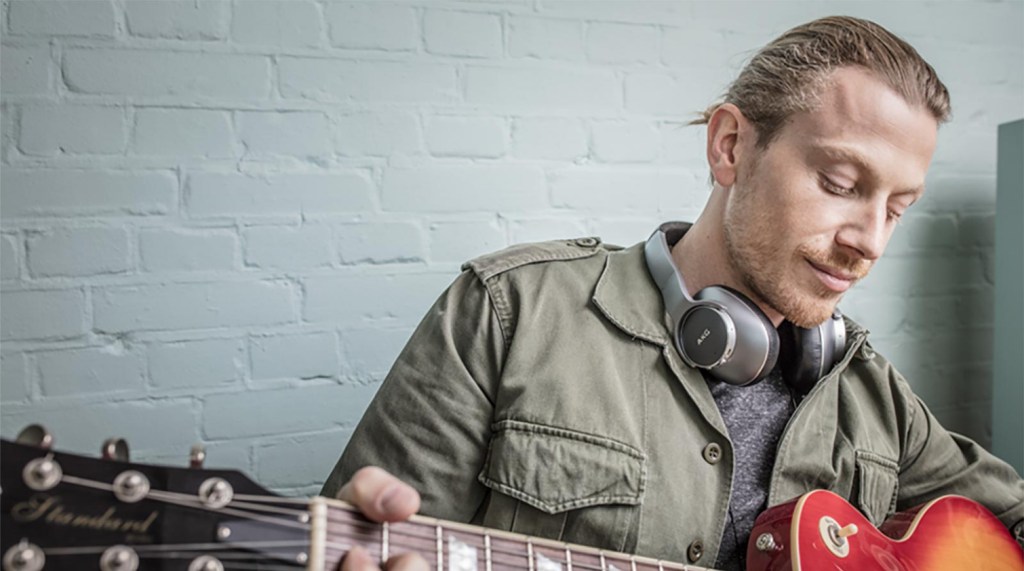 Samsung’s AKG N700NC are the best headphones in the company’s Harmon-branded AKG series, and can seriously compete with Sony’s noise cancellation when it really counts.

You’ll get up to 20 hours of music playback on a single charge. That’s with both Bluetooth and Active Noise-Cancellation turned on, but it bumps up to 36 hours when wired and with ANC turned on. For its price, that’s a lot of listening, with standout battery life enough to last nearly an entire international flight.

Samsung delivers knockout noise, which in our experience can block out low-end tones (think plane engines, and crying children) more effectively than even the Sony WH-1000XM4s before they reach your ears. These headphones do a great job at letting you control how much you want to let the outside world in with the touch of a button, thanks to their Ambient Aware mode.

We’ve tested out the AKG N700NC, and trust us that you’re getting first-class, studio-quality sound. The details in your music will really shine through here, and you won’t get shrill trebles or overpowering bass. The balanced sound allows for smooth, multidimensional tones, whether you’re jamming out to classic rock or hip-hop.

The ergonomic design is also a godsend for frequent travelers, with a flat and foldable headband that easily slips into your bag. At 9.2 ounces, they can still get a little heavy, but with memory foam ear cushions and padded headband, you can listen in comfort for hours on end.

If you’re on the hunt for new Samsung headphones, the AKG N700NCs deliver killer sound, with everything you want to hear and nothing you don’t. 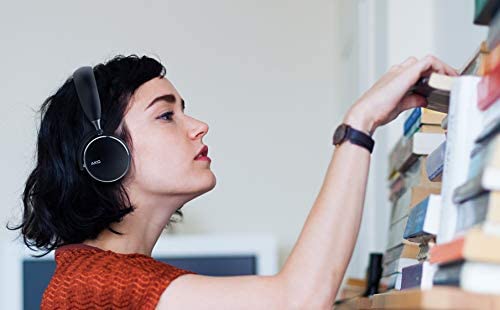 Samsung’s AKG Y500 give you all the same detailed sound you’d want out of their over-ear headphones, in a sleeker, lighter package.

It doesn’t sacrifice any of the best features to come out of the AKG N700NC — offering up a 33 hours of music on a single charge, comfy memory foam earpads, a padded headband, and the ability to get an hour of playback with only a five minute charge. But they’re especially noteworthy weighing in at roughly half a pound, so you’ll be able to wear them all day without getting sore.

This AKG Y500 are part of Sony’s AKG of headphones, which provide the same balanced, multidimensional sound pleasant without boosting lower frequencies too much. You may miss the thump on bass-heavy tracks, but we almost prefer the even tones. The headphones will auto pause when taken off, and resume your music automatically when placed back over your ears.

The one major feature missing from the AKG Y500s? Active noise cancellation. You won’t find that feature on most on-ear headphones anyways (although Marshall’s Mid ANC is the exception to the rule), but you will get some form of it here. Samsung’s Ambient Aware technology lets you control how much surrounding noise you want to let in to your headphones with just the touch of a button, and it’ll do the trick for most everyday noise around your home, like ringing phones.

With that exception, the AKG Y500s are a fantastic pair of over-ear Bluetooth headphones from Samsung, designed to be as comfortable as possible so you can keep the music going as long as you want. 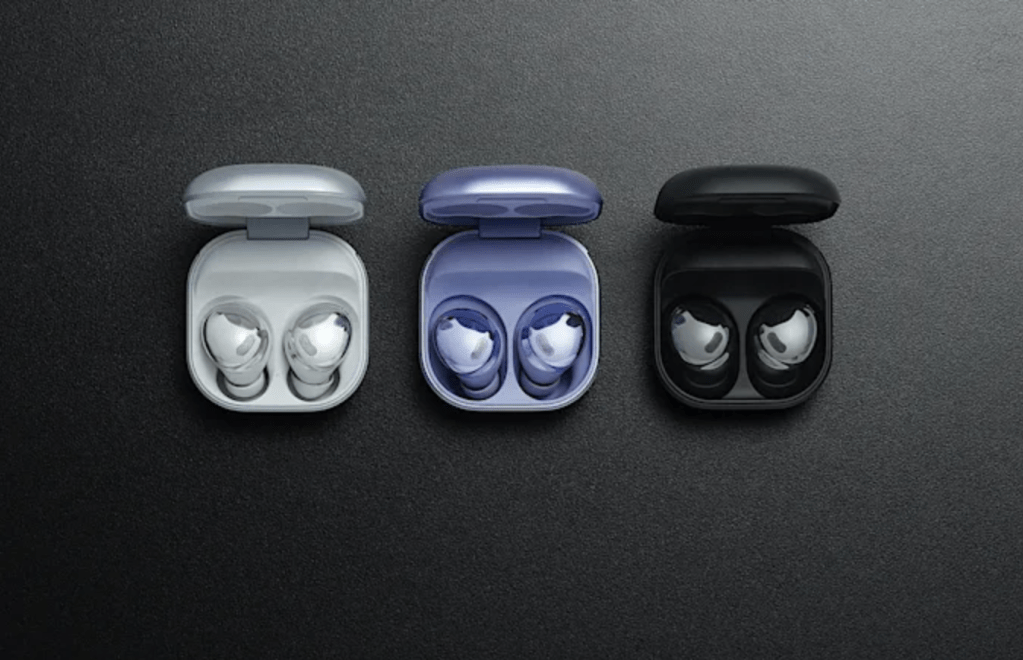 The Galaxy Buds Pro are Samsung’s latest pair of premium, totally wireless earbuds, and they boast an impressive array of features that improve upon their predecessors in a few key ways.

To start, the battery life is fantastic — you’ll get eight hours on a single charge (which is more than the Apple AirPods), and up to 28 hours by popping the buds into their charging case. They also support both USB-C and Qi wireless charging.

The Buds Pro finally took a page from Apple’s book and allow automatically pair up and switch between your Galaxy smartphone and tablet over Bluetooth. If you’re out of the Samsung ecosystem, you’ll miss the multipoint connectivity, but it’s not a huge loss.

On the audio side, these Samsung buds are their best-sounding yet, and they’ve packed in larger two-way speakers than what was available from the Buds Plus. Each earbud carries an 11-mm woofer for midrange and bass, and 6.5-mm tweeter to better handle treble tones. This bumps up the accuracy and detail significantly, and the AKG tuning means a more robust soundstage, and spacious sound.

The Galaxy Buds Pro’s active noise cancellation also outperforms the Buds Live, blocking “up to 99 percent” of noise” at 118.43Hz”, which muffles more distractions so you can focus on your music. Though one of the best features in these buds is their “voice detect”, which will automatically turn down the volume and switch from ANC to ambient mode as soon as you start talking.

The wireless earbuds also feature Samsung’s new 360 Audio, which uses Dolby Head Tracking to give the Galaxy Buds Pro a “multi-dimensional sound” that mimics surround sound. No matter which way you turn your head, you’ll “feel” the sound coming at you in that direction — which works just as well as Spatial Audio on the AirPods Pro.

Overall, Samsung’s Galaxy Buds Pro are not only the best wireless earbuds in their portfolio right now, they beat out some of the toughest competition on the market. 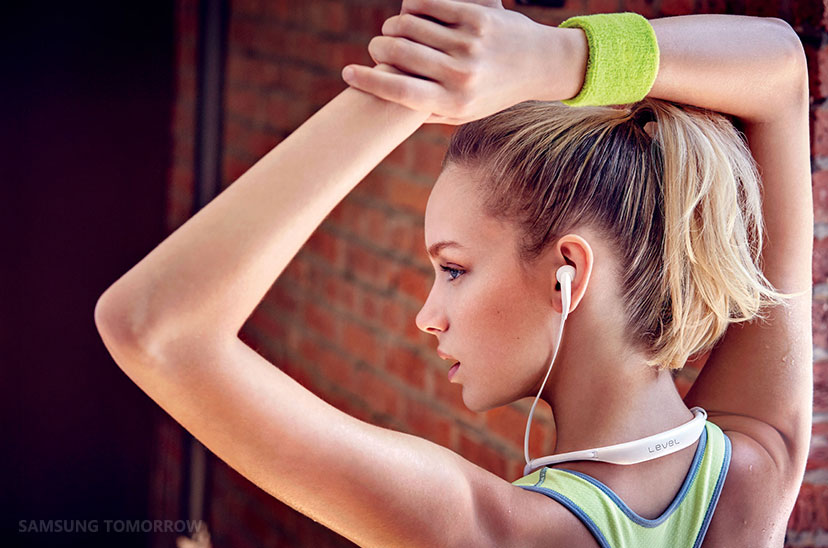 If you want the same high-quality sound without getting bogged down by an abundance of tech-y features, Samsung Level Us prove that there’s no school like the old school.

The Bluetooth around-the-neck headphones offer up to 10 hours of listening time on a single charge. But with the high-capacity battery, you’ll also get 11 hours talk time, or up to 500 hours of standby. All this coming from a pair of headphones that weigh 4 ounces, less than the AirPods Pros.

These are best whipped out for your next workout, with the Level Us ergonomically designed to stay in place with flexible joints and wing in-ear gels to keep your earbuds locked in. The Level App also gives you access and control to advanced settings on the headphones, so there’s no finicky touch controls to contend with while you’re moving.

The audio quality if the Level Us is much of the same from what we’ve heard from Samsung, with large, 12-mm speaker units that deliver clear, crisp sound. While you won’t see a ton of extra features here like ANC, one nice touch is their active, dual-mic noise reduction, so outside noise doesn’t interfere your music or with calls as much.

They’re fairly streamlined when you compare them to Samsung’s other offerings, but they give you everything you need for taking good sound on the go, all for less than $100. For their price point, the Samsung Level Us are as stylish and capable as it gets.