TVs have gotten a lot larger over the past 10 years, but they still can’t recreate the feeling of being in a movie theater quite like a projector.

Not only can they produce a bigger image, but projectors are also way more portable than a TV, so you can use them both inside and outside. That’s a major plus if you don’t want to dedicate an entire chunk of you living room to a giant screen that takes up room even when it’s off, or like the idea of hosting an outdoor movie night. If you’re new to the idea of getting a projector, we’ve done some research and found three under $500.

We also have guides to the best portable and 4K projectors, and have broken down the main differences between TVs and projectors if you can’t decide which is best for you.

From Air Purifiers to AirPods, These Are the Best Cyber Monday Deals to Shop Now

RS Recommends: Sony's Noise-Cancelling Headphones Are $102 Off for Cyber Monday

What Are the Best Projectors Under $500?

There are many factors to consider when choosing the best projectors under $500; below are the most important ones, which we considered while we were researching this list.

Native Resolution: A lot of projectors accept HD content, but very few of them can actually produce an HD image. Many of them use a technology called “downsampling,” which means it takes a high resolution image, and scrunches it down to a lower quality one. Think of it this way: You could play a Blu-ray on an old tube TV, but it won’t look as good as it would on a modern set. Most of the projectors we’re recommending have a native HD resolution, so you don’t have to worry about this.

Throw Distance: This is a math equation that calculates how big a projector’s image will be based on how far away it is from the screen or wall it’s projecting onto. The further away the projector is from the wall, the larger the image will be. Some projectors are categorized as “short throw,” which means they’re calibrated to throw a larger image from a shorter distance.

Brightness: The image thrown by a projector is highly susceptible to light pollution, which will dim its image before it hits your screen or wall. The brighter the projector, the more it’s able to overcome light pollution. Unfortunately, the brighter the projector, the lower the battery life. If you plan on using your projector at night, brightness won’t be as big of a factor, but it’s something to consider if you’re going to use it to replace your TV in a well-lit room.

Ports:  Ports let you connect computers, game consoles, phones, or tablets to the projector, so the more ports the better.

Speakers: All of the projectors on this list have built-in speakers, so you don’t have to carry a pair around with you to watch a movie. That said, the speakers are generally smaller, and less powerful because of space restraints, and can add to power consumption. 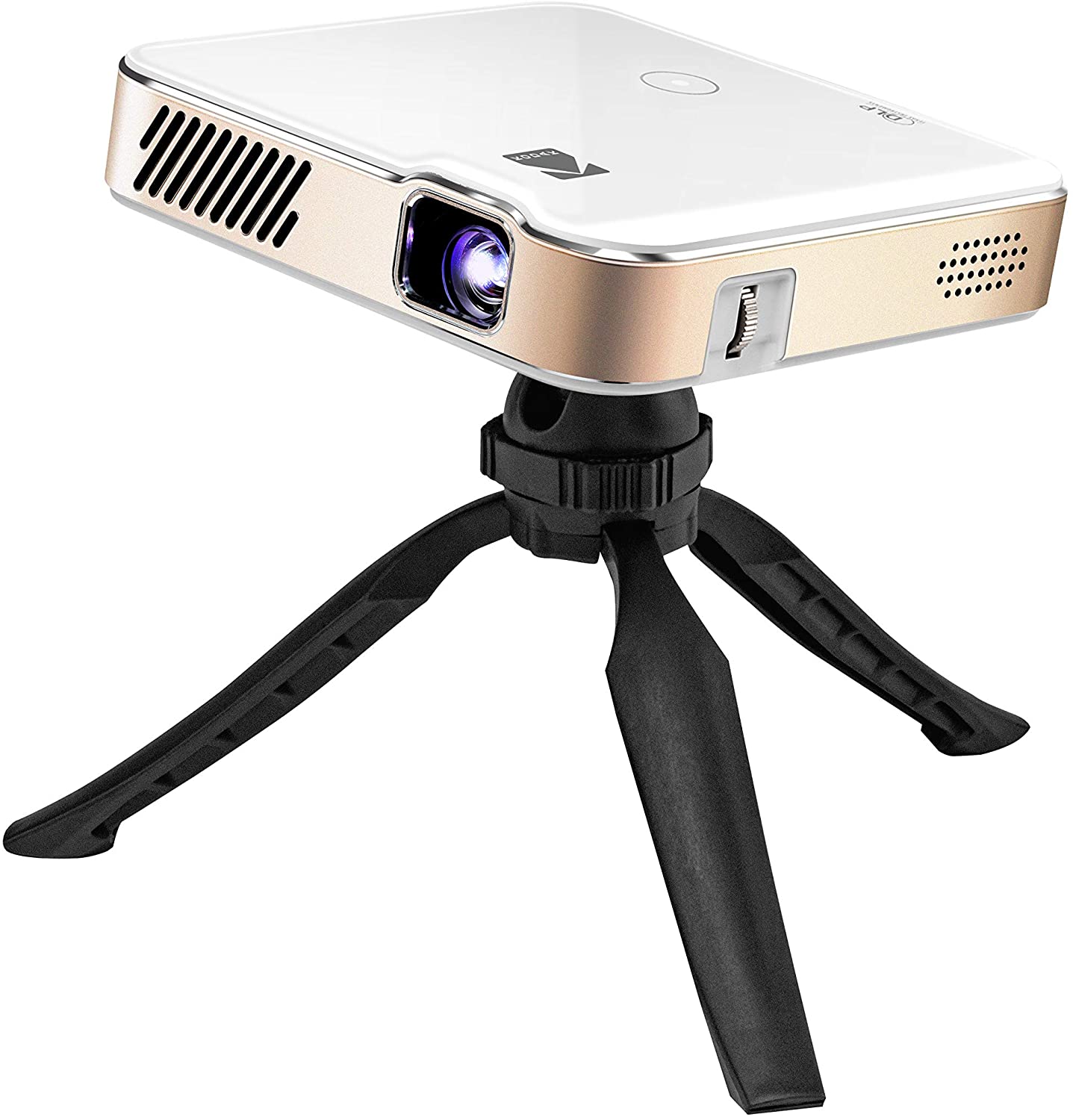 If you’d like the best possible experience with a projector, but you’re on a fixed budget, check out Kodak’s Luma 450.

It has a native resolution of 1920 X 1080 (aka Full HD), so images will look really crisp, even if they’re blown up to 150 inches, which is this projectors maximum screen size. Kodak says it needs to be about 12.5 feet away from the wall to produce a 150-inch image, which means it has a pretty standard throw distance.

The Luma 450’s only real weakness is its maximum brightness, which is only 200L; this won’t matter if you’re in a dark room, or using the projector at night, but you’ll definitely notice a washed out image at night. The reason for its low maximum brightness is that the Luma 450 can be run off of an internal battery that Kodak says can last for up to three hours per charge. By prioritizing portability and image quality, screen brightness took a hit.

In terms of connectivity, this projector has the essentials. There’s one HDMI port (the universal standard, which lets you connect game consoles, media streamers, and computers), a USB port so you can play movies off a flash drive, and a headphone jack that lets you connect the projector to a more powerful set of speakers. That last port is especially important because the Luma 450 only has a pair of 1W (watt) speakers, which may not be loud enough if you’re in a noisy environment.

It may only have one HDMI port, but you can wirelessly stream videos and music from your phone or tablet to this projector via Kodak’s Luma app (iOS and Android). The app has a screen mirroring feature that lets you view anything on your device on the Luma 450, so you can use it without connecting a single cable.

If you want an ultra portable projector that can create a big, high resolution image, and don’t mind that it should only be used in very dark environments, Kodak’s Luma 450 is the right pick. 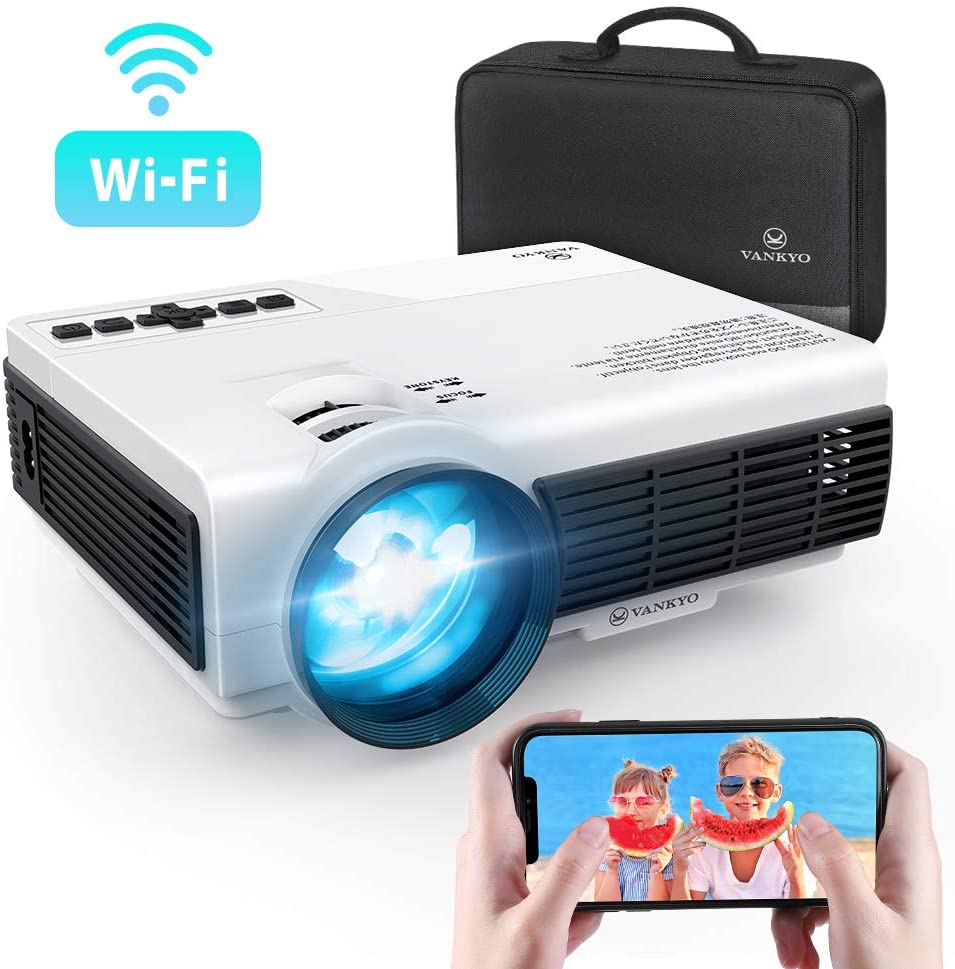 VANKYO’s Leisure 3W is a great option if you’ve never had a projector before, and need one for casual use.

It has a native resolution of 800 X 400, so images will look a little blurry if they’re blown up really big. This projector’s maximum screen size is 176 inches, and it can create a 33-inch image from 3.28 feet away, so its throw is fairly long. VANKYO doesn’t reveal the 3W’s maximum brightness, so we recommend using it only in dark environments.

The projector has one HDMI port, one VGA port, a USB port, and a headphone jack, so you should have no problems connecting any of your tech to it without an adapter. The 3W also has hardware built inside of it that allows you to mirror your phone’s screen through the projector when both are connected to the same Wi-Fi network. The 3W has two speakers, but VANKYO doesn’t offer any information about how powerful they are.

If you’d like a projector for a relaxing indoor movie night, and aren’t a serious home theater enthusiast, VANKYO’s Leisure 3 is a good choice.

Note: Amazon is currently offering a $15 coupon on this projector, which brings its price down to $114.99. 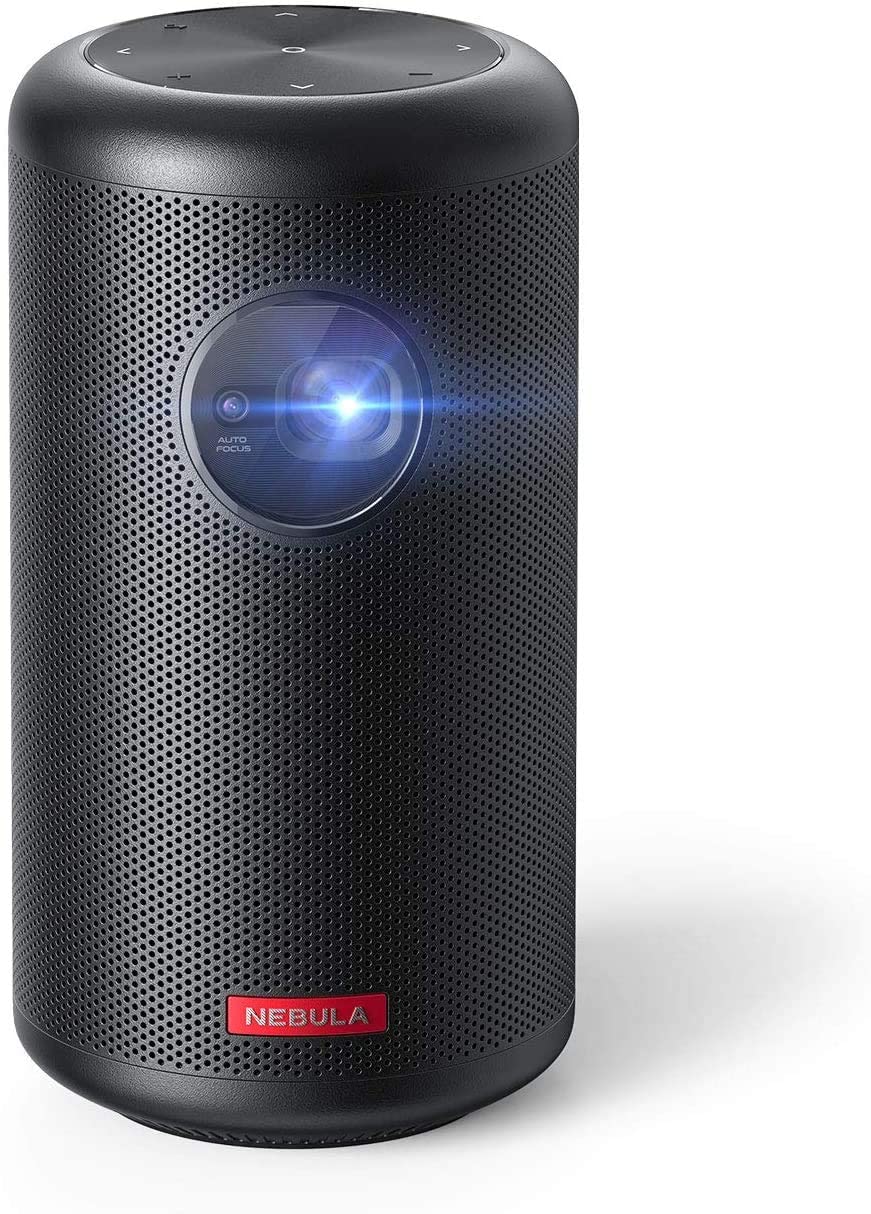 The Nebula Capsule Max is the latest entry in the company’s long line of portable, smart projectors.

It has a native resolution of 1280 X 720 (720P), so your videos will look very clear if they’re blown up to a big size. The Nabula Capsule Max can create a 100-inch image, but the company doesn’t give any information about its throw distance. Like Kodak, Nebula chose video resolution and portability over screen brightness. The company says the Capsule Max can run for up to four hours on battery power, which is great, but its 200L screen brightness means you can only really use it in very dark environments.

The Nebula Capsule Max only has three ports: One HDMI, one USB, and a headphone jack. The headphone jack actually may not be necessary because the projector’s 8W mono speaker system should be plenty powerful. The main reason we’re recommending this speaker is because it runs Android, the same operating system as tens of millions of phones. Because it’s basically a self-contained computer, you can connect the projector to Wi-Fi and download apps from the Google Play store instead of connecting a media streamer, or sharing the screen from your phone. I’ve used a couple of Nebula’s other projectors, which have the same features, and I found it very simple to find, download, and run new apps.

The Nebula Capsule Max strikes the right balance between portability, image quality, battery life, and smart features to make it an excellent projector regardless of your budget.

Note: Amazon is currently offering a $30 coupon on this projector, which brings its price down to $439.99.