For modern travelers and backpackers, a power bank is up there in importance with a money belt, passport, and extra underwear. Or at least it should be. We rely on our devices for everything in our regular, local, daily lives, and when in a foreign city or country, that goes up exponentially – along with our phone battery usage too.

Being a tourist puts a significant strain on your device’s battery life: constant GPS to navigate where you’re going, WhatsApp and Messenger to keep in touch with people back home, and a phone, in case of emergencies. Even if you’ve got your standard wall-charger or USB with you, there’s no guarantee an available outlet will be easy to find (or worse, finding out they use different outlets across the pond). An extra power bank in your bag can be an absolute life-saver, and most travelers will be able to tell you some story from their adventures when they’re not sure what they would have done without having one handy.

Whether you’re exploring new cities or retreating from civilization for a while, these four options offer something for every type of person and lifestyle. Depending on where and how often you’ll be using it, some work better than others. But no matter which one you go with, a backup battery has got your back when you need it most.

BTS' Big Week Just Got Bigger, With the Debut of Their New Global FILA Campaign

What Are the Best Power Banks?

There are many factors to consider when choosing the best power bank for you; below are the most important ones, which we considered while we were researching this list.

Capacity: The amount of electricity a power bank can hold is measured in milliamps, abbreviated to mAh. Lower capacity battery packs typically hold between 5,000mAh and 10,000mAh of power, while larger capacity options have between 20,000mAh and 30,000mAh.

Size and weight: A power bank’s capacity is directly proportionate to its size and weight. Smaller battery packs are more portable, so they’re better for charging gadgets like your smartphone while you’re out for the night. Larger power banks are heavier and bulkier, so you should rely on them to charge bigger tech like tablets and laptops, or as your source of power during international travel.

AUKEY managed to fit all of this technology into a power bank without making it very large. The battery pack is 6.1-inches long, and weighs just over half a pound, so you can carry it around in the front-zippered pocket of a backpack, or a purse.

If you want a versatile power bank that’s easy to take with you, AUKEY’s 10,000mAh battery pack is the best choice. 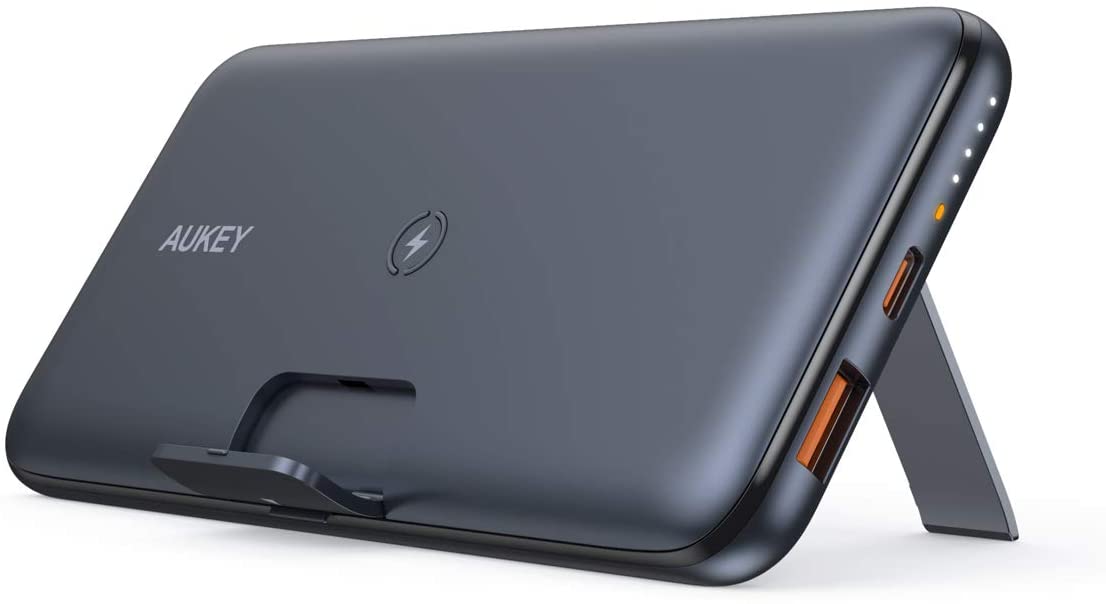 Anker’s PoweCore 5000 is an ultra-portable battery pack that’s well-suited for charging smartphones. It’s only 4.2-inches long and .3 pounds, making it the smallest battery pack in our guide by a fair margin. This is a power bank you can stash in your pocket if necessary.

Its small size does come with a couple of drawbacks you should consider. First, its small battery capacity means it won’t have enough juice to charger larger devices. Anker says it can fully recharge an iPhone 8 twice. Second, it only has a single USB-A port, which won’t output enough power to charge power-hungry gadgets like tablets and laptops. This also means you can’t charge more than one device.

Still, these are minor drawbacks when you consider this power bank takes up so little space. If you need to extend the life of your device by a few hours, and like to pack light, Anker’s PowerCore 5000 is your best bet. 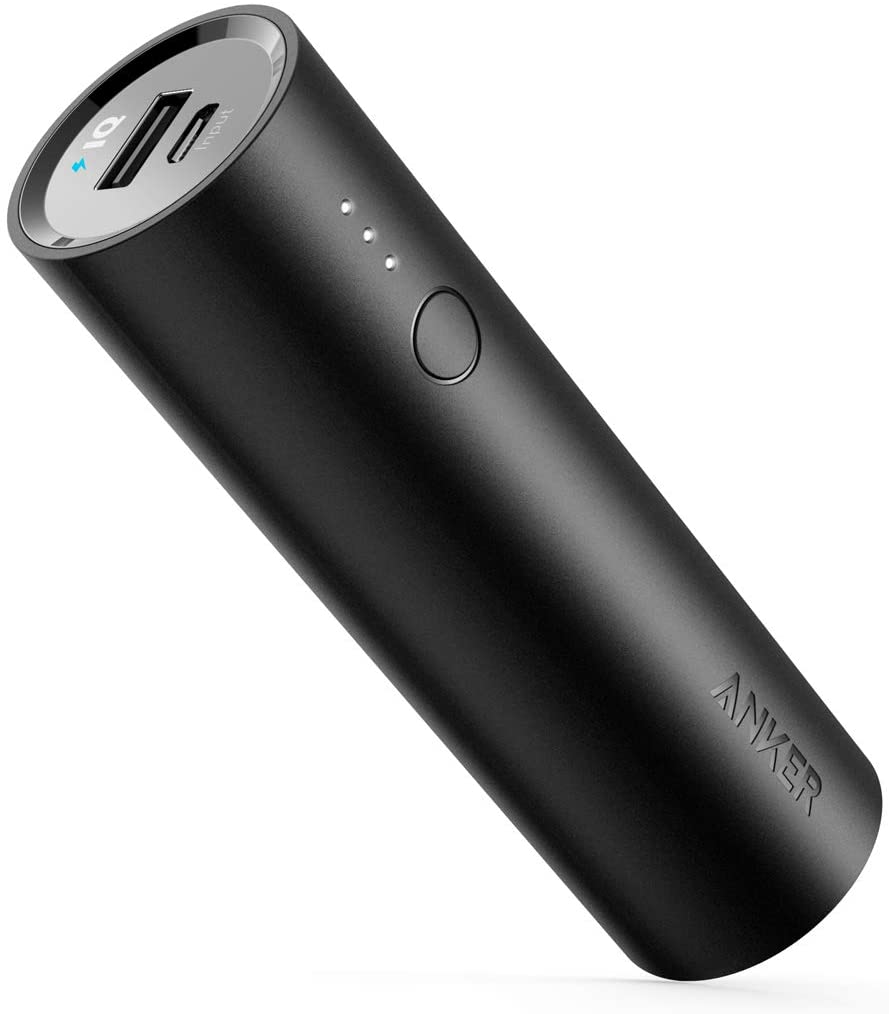 RAVPower’s AC Power Bank can charge any device you throw at it. It holds 30,000mAh of electricity, which RAVPower says is enough to fully recharge an iPhone 11 Pro Max 4.4 times, or a 15-inch MacBook Pro once. It has two USB-A ports, one USB-C PD port with a power output of up to 45W (60W if you connect it to a laptop), and an AC outlet with a maximum power output of 100W. These specs make it the most powerful power bank we’re recommending in this guide by a fair margin.

You can charge up to three devices at the same time over USB, and the battery will automatically distribute the correct amount of electricity based on how much power your device is drawing. If you want to use the AC port, you’ll need to hold the power button for 8 seconds. You will not be able to use the USB ports while the AC port is in use.

All of this power comes at the cost of portability. RAVPower’s AC Power Bank is 7-inches long, and weighs 2.2 pounds. This isn’t a battery pack you’ll want to take with you everywhere, but it can hold enough power to get you through a weekend camping trip, or an international flight. If you need a battery pack that can charge all of your devices at their maximum speeds, and aren’t concerned about its size or weight, RAVPower’s AC Power Bank is the right choice. 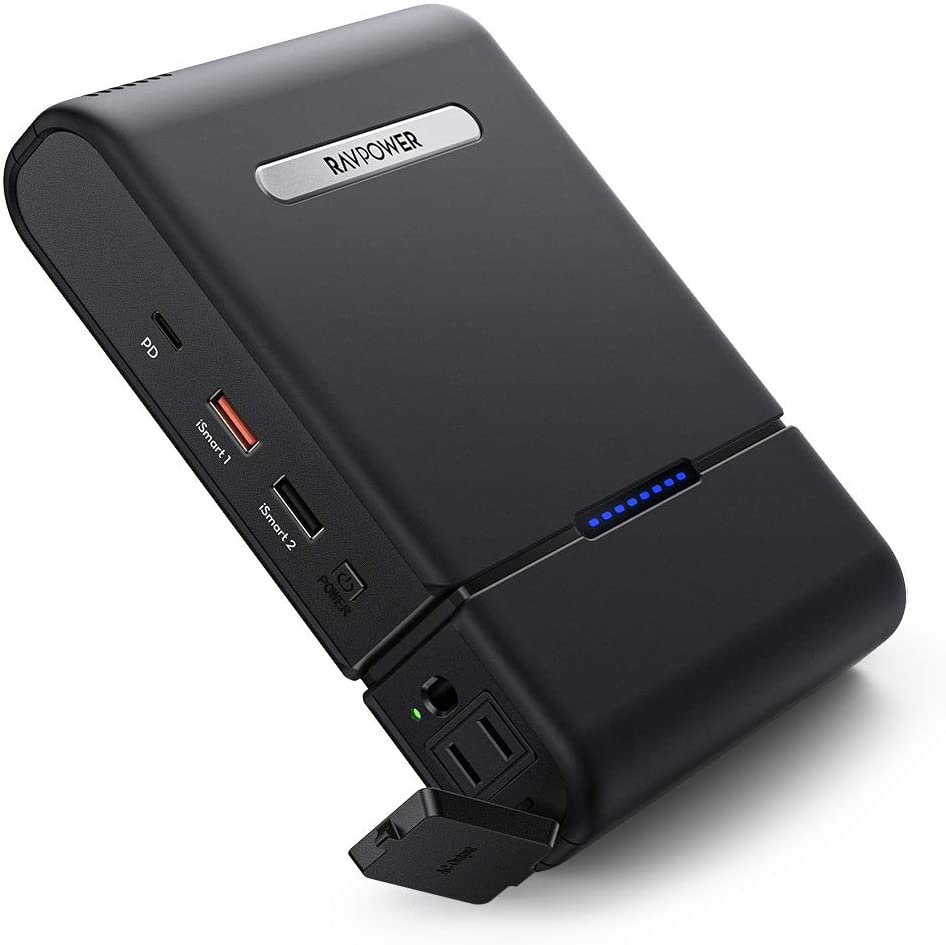 Mophie’s powerstation offers a great balance of power capacity and weight, and has an additional feature that makes it an excellent choice for iPhone owners. It holds 10,000mAh of energy, which means it’ll probably be able to charge your phone a couple of times before having to be recharged itself. It has a single USB-A port, but you can still charge two devices at the same time.

That’s because this power bank has a Lightning cable attached to it, so you can plug your iPhone in without having to carry around a separate cord. The cable on the powerstation gets tucked away into the battery pack when it’s not in use, so you don’t have to worry about it getting frayed or cut when it’s in your bag.

This isn’t the right battery pack for you if you want to charge tablets or laptops, but it’s a great solution if you’re looking for a compact power bank to charge your iPhone while you’re out of the house. 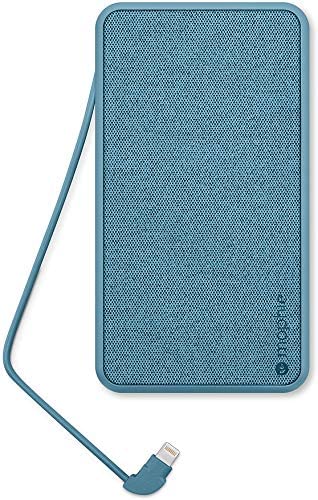