How to Record Music on the Go: Best Portable Recording Devices - Rolling Stone
×
×

Mark Foster has spent countless hours working on music in the studio, but lately, the Foster the People frontman says he’s been trying to take his songwriting to go.

“The past couple of years, it’s been a goal of mine to capture inspiration when it strikes,” says the singer and guitarist, who has also set a goal of releasing a new track with the band every month, as they complete work on their fourth album. “When it’s flowing, I push through and try to write lyrics right away so I can get the finished vocal right away while it’s still new, fresh and exciting. Otherwise,” he says, “it’s impossible to replicate that initial spark.”

With technology making everything easier and more accessible these days — from ordering food to booking travel — it was only a matter of time before these modern conveniences began to shake up the music industry as well.

These days, Foster is among a number of musicians who are increasingly eschewing the traditional recording process to compose, record and mix tracks on the fly. Though he’s spent countless hours in the recording studio, Foster says some his favorite tracks with Foster the People have been recorded on a tour bus or in a hotel room, citing “Doing It For The Money” off their 2017 record, “Sacred Hearts Club,” and closing track, “Fire Escape” off the band’s sophomore release, “Supermodel,” as examples.

“Back in the day,” Foster says, “you could make a decent demo with a decent vocal and a tape recorder, but you couldn’t program drums and multitrack and add synthesizers with different sounds like we can now. Today,” he says, “we have access to thousands of synthesizers and drum machines with devices that fit in your pocket.”

While the quality of true studio recordings remains unmatched for now, Foster says technology is catching up to where portable recording devices could eventually replicate studio sound. And the guy whose father bought him an 8-track mixer and a stack of cassette tapes for his 13th birthday says he’s intrigued by what these new mobile, digital devices can deliver. “Songwriting has evolved and you no longer need to sit in the studio and be surrounded by heavy equipment and tons of technology,” he says. “There’s a certain type of creativity that’s required to lay down a track using the boundaries of mobile technology, and I’m excited to see where we can take it.”

And while audio quality remains paramount to his creative process, Foster, who recently directed the band’s music videos for “Style” and “Worst Nites,” says the new slate of portable recording devices also allows for spontaneity – something that can’t be done when you need to reserve a room and wait for your designated studio time. In Foster’s world, “I can’t control when something’s flowing or not,” he says, “I just have to be there to capture the magic when it does.”

Whether you’re the lead singer of a Grammy-nominated band, or just an aspiring musician uploading your tracks to social media, we’ve rounded up three of the most popular interfaces for recording, mixing and sharing music on the go. 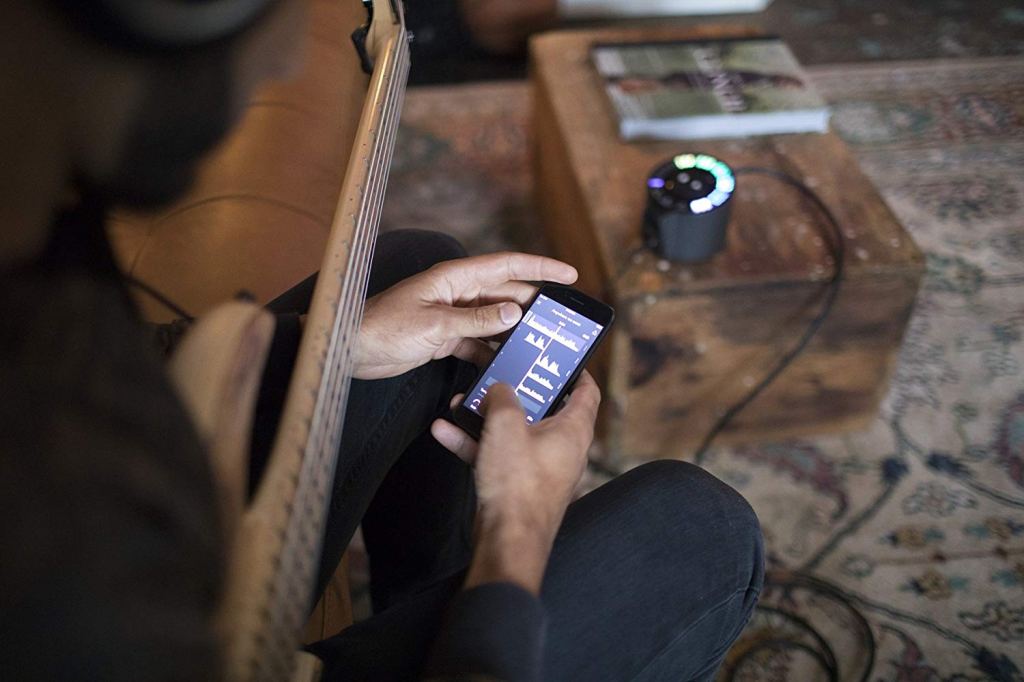 Spire Studio is audio technology brand iZotope’s easy recording kit for iOS and Android, letting users record, edit, mix, and share songs from one simple, portable device. The Spire lets you track vocals and instruments in hi-fidelity, with built-in technology that works to enhance both audio resonance and pitch.

The kit includes a built-in mic, plus additional inputs for say, your guitar or bass. Reviewers say they’ve also used the Spire to lay down drum tracks with surprising clarity. Control everything from the simple LED touchscreen or pair the Spire wirelessly with your phone (and the Spire app) to mix tracks, adjust volume and set recording levels. The app lets you mix up to eight audio tracks at once, and add effects like reverb and delays. Spire Studio’s patented “Soundcheck” feature, meantime, helps prevent distorted recordings by listening to a performance for 10 seconds and then setting ideal recording levels for the on-board mic or any instruments that are plugged in. 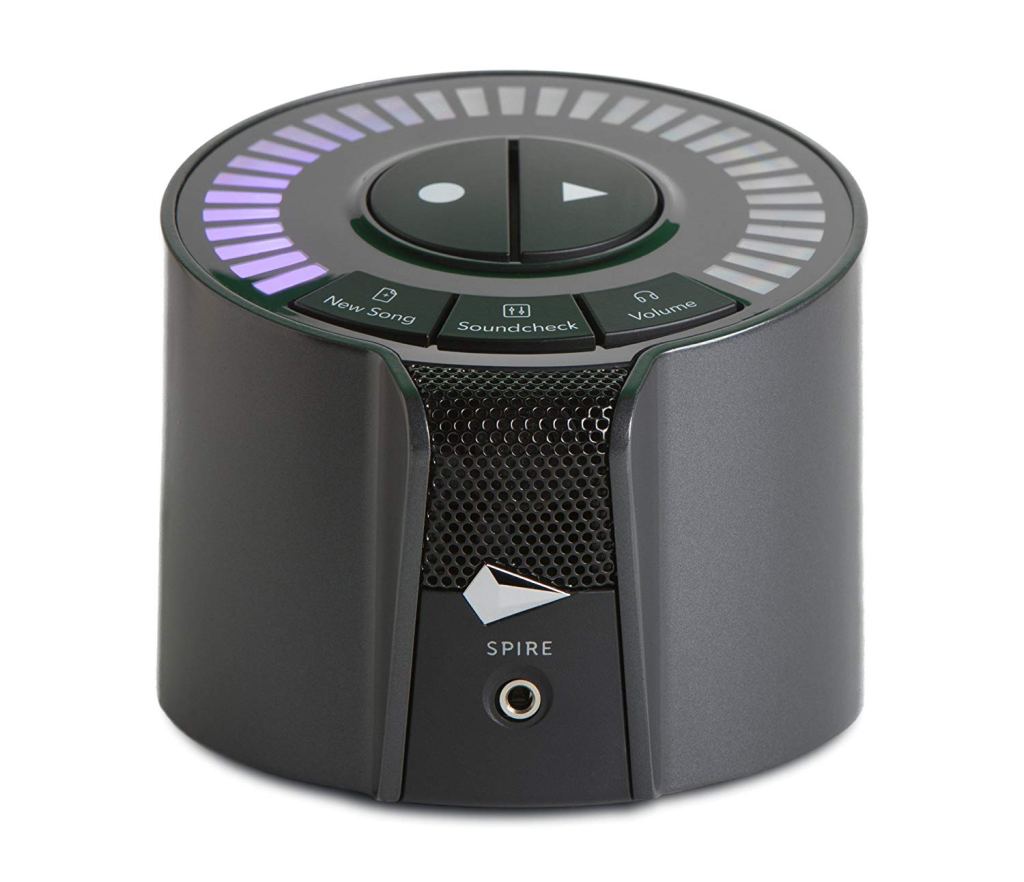 Once your song is done, a simple tap sends it straight to social media or SoundCloud (or as an audio file to a collaborator).

What we like: the Spire weighs less than two pounds and fits easily in your bag. The included rechargeable battery gets you up to four hours of use before needing to be plugged in. Purchase: $349 on Amazon.com. 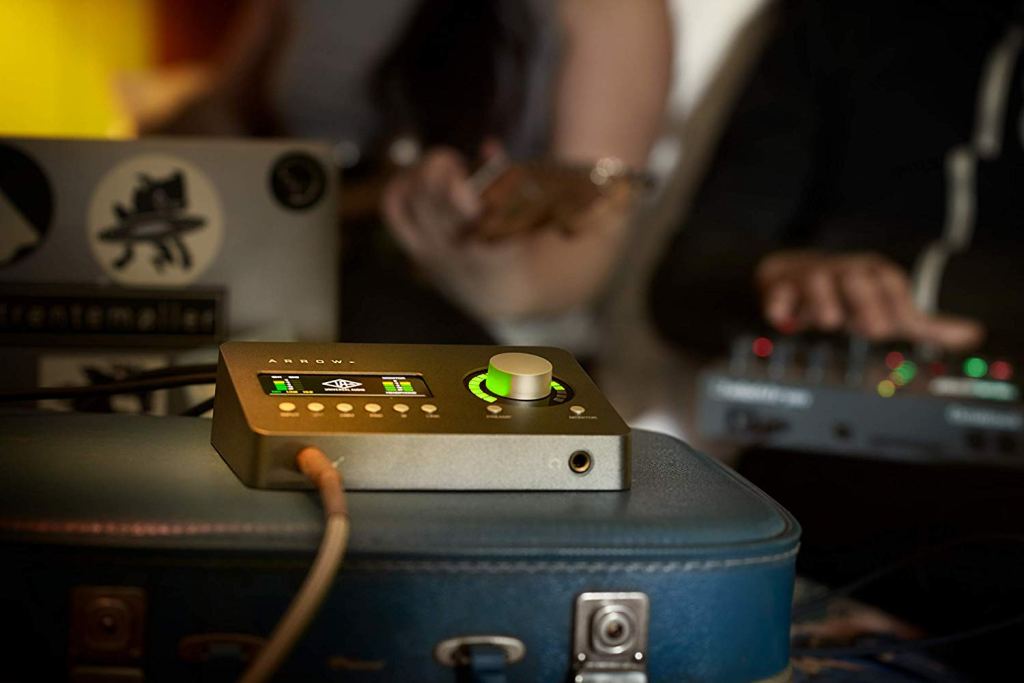 The Universal Audio Arrow puts album-quality recording onto your lap or desk with a notebook-sized interface that lets your track your vocals and instruments with surprising depth and clarity (for audiophiles, the Arrow delivers a solid 24-bit/192 kHz audio conversion).

The unit includes two 1/4-inch connections for mic/line sources, a 1/4-inch input for your guitar and bass, and an output for your headphones. It also comes with a number of popular plug-ins from Universal Audio, which emulate some of the best original hardware to give your digital tracks an analog feel. Note: you’ll need a Thunderbolt 3 connector to pair the Arrow with your computer.

Great to travel with, many artists also use the Arrow for their home studios, praising the system’s easy setup, near-zero latency performance, and powerful processor. The unit’s durable, metal construction holds up to accidental dings and drops on the road. Purchase: $499 on Amazon.com.

If you’re just looking for a solid voice recorder and don’t need the editing software on hand, consider picking up the Zoom H6 Portable Recorder. Used by everyone from reporters in the field, to documentary filmmakers, to musicians, the H6 gets you six tracks of simultaneous recording and four mic/line inputs. Record directly onto SD, SDHC or SDXC cards for easy file transfer.

The Zoom delivers 24-bit/96kHz audio in WAV or MP3 format, and comes with both X/Y and mid-side stereo mics. Users say the device is incredibly intuitive and easy to use, and they like the input controls that can be adjusted to filter out ambient noise and direct your mic to pick up more focused, accurate sound.

What we like: the palm-sized package weighs less than a pound and runs on four standard AA batteries. One of the best-selling portable voice recorders online, the Zoom H6 currently holds a 4.6-star rating from hundreds of reviews. Purchase: $399.99 on Amazon.com.