A portable power station is an essential that, at the very least, should be in everyone’s emergency kit. They’re a lifesaver in worst-case scenarios like blackouts and extended power outages, and an invaluable convenience when it comes to activities like camping and RVing.

Don’t confuse these with fuel-based generators either. While they may serve the same ultimate goal of providing power, these ones are cleaner, more portable, and much quieter. Not to mention that during an emergency, you may not have access (or have limited access) to the fuel source an old generator needs. These ones draw power from Lithium-ion batteries and solar, converting clean energy and storing it for when you need it most.

They’re not just for emergencies either — using these a few hours a day will help ease your reliance on the grid, as well as cut down on your electric bill too.

Here’s what to consider when buying the right portable power station for you:

Connectivity and Monitoring: Many of these are Bluetooth- and WiFi-connected units. They’ll also have a digital, or multiple digital, displays right on the unit itself, so you can monitor your power usage, see what’s eating it up, and how much remains. Apps let you easily see the stats on-screen too, saving you a trip running back and forth to wherever the station is sitting.

Wattage: For peak power 3000-5000 watts is a safe bet. But that’s just at its peak, not what you’ll be consistently using it at. Instead, look at the amount of continuous power it can handle. For the Lithium-ion battery itself, a 550 or 1100 watt should do. These are ready to handle large devices too: Laptops and tablets are no problem, even vacuums, microwaves, refrigerators, and power tools.

Ports: With such a large device, there’s usually no shortage of ports on these. But at minimum, go for something with at least two AC plugs, and around four USB ports.

Charging: You can charge these up from a wall outlet any time, and it usually takes a few hours. But solar is an increasingly popular, simple, and free way to collect power that’s stored in the battery. Whether the power station comes with solar panels or they’re sold separately, chances are that they’re compatible, and we highly suggest using them. Some even have features that follow the sun’s arc for maximum efficiency.

Elton John Quits Twitter: ‘Misinformation Is Being Used to Divide Our World’

Noise: For those of us that had to deal with noisy, smelly, old generators that pump out fumes in every direction, this will be a welcome change. These are almost totally silent, making it great for outdoor activities and safe for indoor as well.

Safety: These generally have excellent heat dissipation, and since there are no harmful fumes, you can safely put these inside and even at your bedside for using nighttime medical devices. Having a powerful flashlight built-in to the battery is also a really nice perk for when the lights go out unexpectedly, with a flashing SOS signal as a nice bonus.

The Yeti features a total of seven ports: two 120V AC, a fast-charging 60W USB-C, a 12V, multiple USB-A ports, as well as optimized solar charging. This is a company that tests its products in the harshest of conditions, under extreme strain, and are on the front lines of creating clean and sustainable power for everyone.

The Lithium batteries on this beast are made by LG, and the aluminum exterior protects the inside from minor drops and damage and is also better equipped against overheating. There’s also a brushless fan on each side to cool it down.

Continuous 1200-watt power means it can handle even power-hungry appliances, along with automatically stopping before it gets overloaded.

With the 120W power supply, recharging takes about nine hours, however Goal Zero also makes a 230W that cuts the recharging time down to about half. Plus you can combine AC charging and solar charging for even faster speeds. 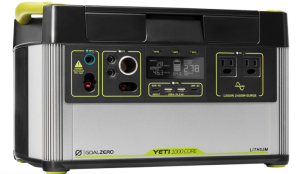 The Jackery Power Station’s 1000-watt capacity is enough to power multiple major devices simultaneously, like an electric stove, fridge, or CPAP machine. The unit features three AC outlets, a carport, two USB-A and two USB-C ports (including one with Quickcharge 3.0). An LCD display up front makes it clear to read stats like output and battery level. It’s significantly lighter than most others on the market, and has a built-in handle to easily carry it around in the dark, along with a bright flashlight and an SOS signal.

These pair up with Jackery’s 100-watt solar panels to cleanly capture the sun’s energy, with up to 23 percent greater efficiency thanks to their MPPT tech. It can also be charged more conventional ways too like AC power and via a car’s port, and supports pass-through charging without compromising its battery life. 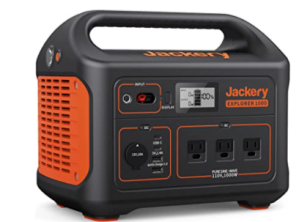 This 120V has 2000 watts, enough to charge the average phone 170 times and even run an 8000BTU air conditioner for up to seven hours. With six AC ports, there’s plenty of space for multiple devices, and it’s easy to fuel up via solar, wall socket, or both at once. There’s no exhaust to worry about, and it’s also protected against shorting and overheating. 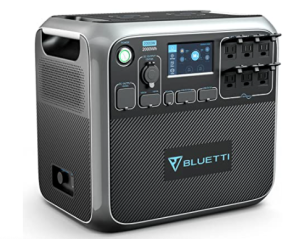 The 2400-watt Delta Max can actually handle up to 3400W appliances, thanks to the handy X-Boost feature. Plus you can link up two more batteries to get over 6000 watts of power. Even without that, this can still handle up to 15 devices at once. Protections are in place too, and you can check the voltage, current, and temperature in real-time on the LCD screen or the app.

The handheld Sherpa is small enough to fit into a backpack, but plenty powerful enough to recharge your devices when you need it most, at 100W, enough to refuel your phone about 8 times. This can also handle wireless charging at 15W simply by placing a device on top, and there’s plenty of ports to go around too, with 2 USB-C, 2 USB-A, and an AC with a 150W surge protector.

As expected from GoalZero, this is tough as nails with its anodized aluminum unibody and ready to be taken off-grid. The unit itself takes about 2 hours to charge up from a wall outlet, or a bit longer from 50W solar panels (around 3-6 hours).

Weighing in at under ten pounds, EcoFlow’s River 2 is truly portable, while providing a wide range of power and features.

This charges up fast – up to 100% in about an hour with a 360W AC input, and is strong enough to handle up to 600W of output, thanks to the company’s X-Boost feature.

There’s also seven safety features built-in, including overload and temperature protection, and the unit can last over 3000 cycles, or about 10 years of regular usage.

When you’re done, you’ve got a few other options to recharge this as well, including solar panels, a 12V car charger, and even USB-C.

Careful — Lensa Is Using Your Photos to Train Their AI