Right around the turn of the millennium, compact discs went from the main source of listening to music, to almost obsolete.

They took a tumble from the top, but two decades on, CDs – and portable CD players – are clawing their way to an unlikely comeback among a growing niche of listeners, much like vinyls have done. Younger fans who were raised on streaming and digital are discovering how much better their favorite albums sound when played off a physical disc, and older fans are eager to dust off their collection of discs to try out in new players.

But these aren’t just clones of the same CD players from 20 years ago though. Thanks to the vast improvements, the best portable CD players have integrated new tech to fix some of the problems of the past.

How to Set Up Two Monitors to Boost Your Productivity

The Best Online Courses for Learning Guitar, Piano and Your Favorite Instruments

One of the biggest was skipping, which wasn’t only irritating, but also incredibly limiting too, always having to make sure you were keeping the player steady and from getting knocked around. Taking your favorite tunes around with you didn’t mean much if the disc was being jostled with every step or bump in the road. Many of today’s CD players have found remedies and workarounds for this, so you can freely move about or drive over potholes without missing a beat. New players actually read the disc data faster than you’re listening to it by buffering it, then committing a little of the song ahead to RAM memory. Once it’s in there, the disc can even stop spinning entirely while your song is intact and uninterrupted.

Bluetooth is another feature to welcome CD players back into the new era. Wired connections can also be done with an AUX hookup, and are especially great for the car, bringing better-sounding playlists than streaming into your long drives.

Another area where these are beneficial is airplanes. When internet and phone service isn’t available or allowed, and you’ll be stuck in the same spot for hours, a CD player can really come in handy – especially with audiobooks on disc.

And if using batteries was a dealbreaker, plenty of new players have rechargeable lithium-ions, so no more constantly replacing dead ones.

These four players will help you hear your favorites in a familiar, but whole new way, all over again.

Worrying about your song skipping is a thing of the past, as this portable CD player has 160 seconds of shock-proof anti-skip technology (and 300 for MP3 files). Same goes for constantly running out of, and switching batteries – this has a built-in 1100mAh lithium-ion rechargeable battery that fuels up through micro-USB, and can play continuously for 10-14 hours, charging up in only three.

What really matters is the sound quality though, and this is among the best available out there right now. With five EQ modes, and two headphone jacks for simultaneous listening with a friend or hooking it up to an external device, this supports both new rewritables as well as your old-school disc collection.

It also comes with a pair of decently sounding in-ear headphones, complete with buds and a tough braided cable. 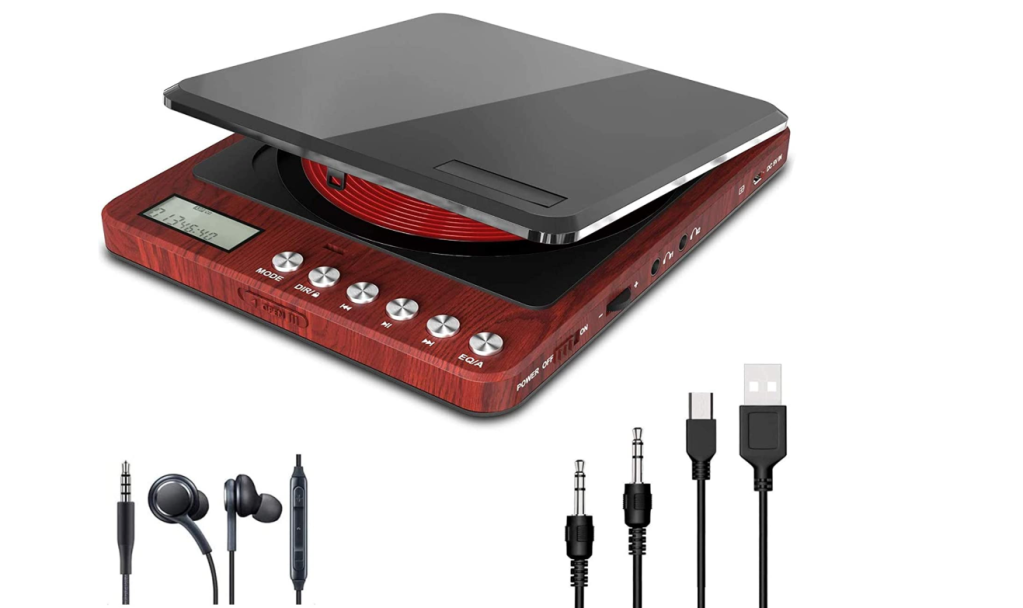 When portable music players come to mind, it’s hard not to think of the Sony Walkman.

This is what started it all, back in 1979, with the invention of the portable cassette player, eventually evolving in the CD-playing “DiscMan” (which, then confusingly, was renamed back to the Walkman).

Bells and whistles are at a minimum here. There’s no remote, no Bluetooth, and no USB connection. It still takes AA batteries, and really hasn’t changed much since the last time you actually bought a CD.

But when it comes to the sound quality itself, it’s hard to beat this classic. And this kit, complete with earphones and car adapters, keeps your CD collection alive, whether it’s an old classic or one you burned yourself.

The “Digital Mega Bass” boosts the low end, while skip-free tech and eight playback modes keep the tracks continuous. There’s even an AM/FM radio, with 30 presets. 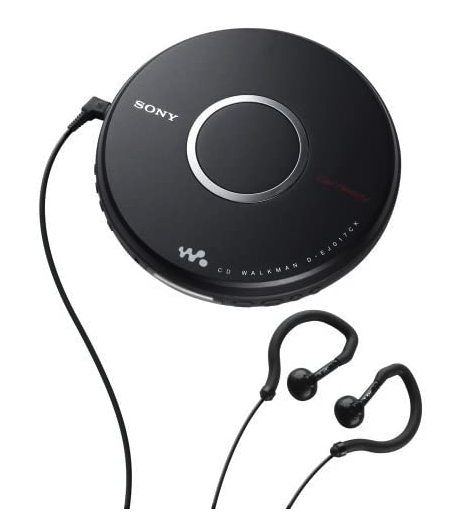 All types of CDs, including rewritables and MP3s, play effortlessly on this unit, with detailed and rich sound. An LCD screen provides the basic controls, and the portable player runs on AA batteries with the option to plug into AC power (though the cable isn’t included).

They also include a pair of Nineties-era, behind-the-ear headphones, which are a welcome change from buds that keep falling out. These things aren’t going anywhere once on your head, but can get a little uncomfortable after long stretches of wearing them. 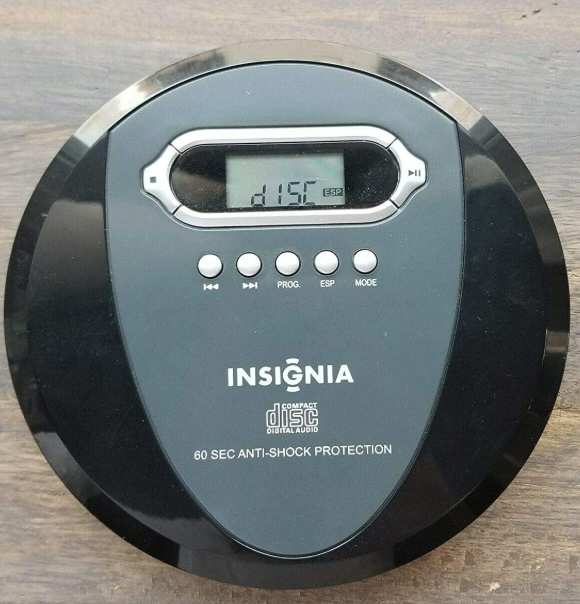 This plays pretty much every type of CD imaginable, and is especially great with audiobook discs thanks to the memory feature, so you’ll never lose your place.

It’s compact, and durable enough to survive the roughness of being in a gym bag or backpack, and is made for use in the car with the AUX cable. Included EQ presets let you find your ideal way of listening, and the unit has up to 120 seconds of skip protection with MP3 CDs (45 with regular CDs).

Setup is incredibly simple, and earbuds are included, as well as an AC and USB adapter. 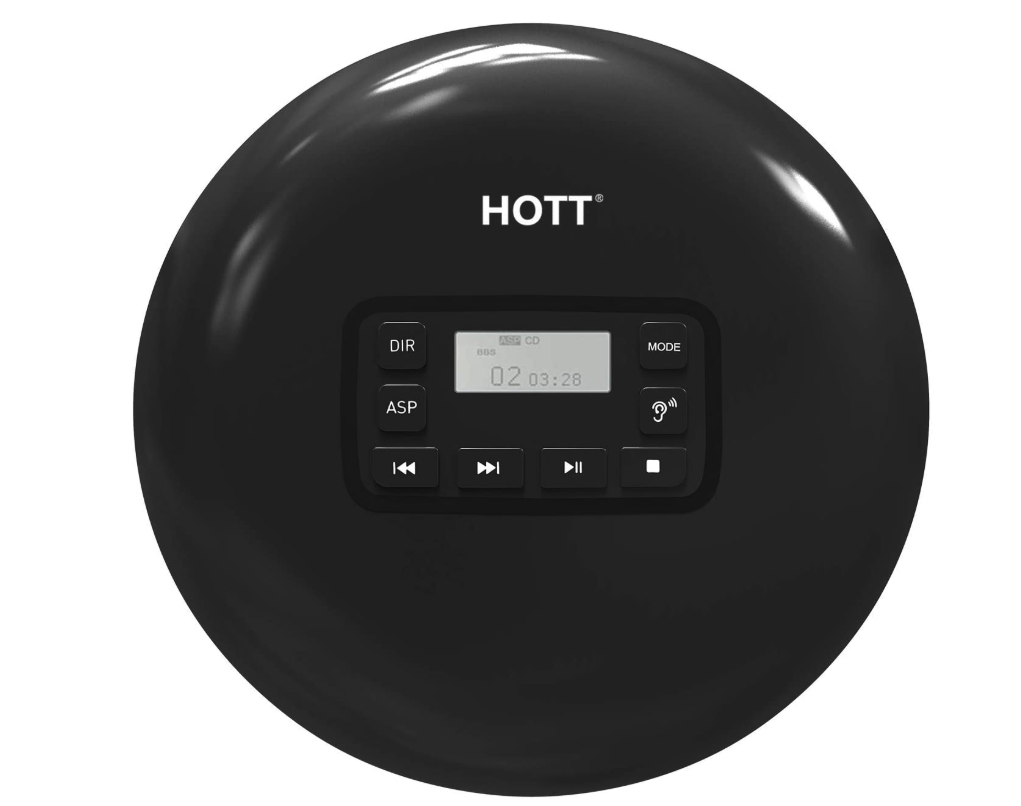