A graphics card allows a computer to excel in complex processing and fast calculations, with the result being crisp and smooth moving pixels.

Consider a graphics card like a smaller computer inside your actual computer. Most cards will consist of the Graphics Processing Unit (GPU), Video RAM (VRAM), and various supporting hardware like its own power supply. The graphics card is usually what uses up the most computing power inside your system, but power consumption is just one of the many things to consider before going all-in and upgrading your PC.

What to Know When Buying a PC Graphics Card

Increasing processing speed might be your goal for gaming; however, it’s a huge help to know the other specs and terms that make up all the capabilities a good graphics card has to offer:

GPU: The GPU is vitally important, as it’s a designated circuit set to rapidly alter memory and create the images you see. If you’ve got the properly powered setup, and a motherboard to handle it, a PC can run as many as four graphics cards at once, all working in unison to split up the processing needs and produce smoother gameplay. And while having two GPUs can double the speed of a single, having three is only marginally better than two, and four doesn’t really perform much different than three, thanks to the increase of complexities for it to calculate. Inside the graphics card, the GPU chip itself is made by one of two companies: AMD or NVIDIA.

Stream Processors: These are the processors within the GPU, whose quick calculations result in the images on the screen.

Clock Speed: This refers to the speed that the processors are running at internally. A higher speed usually means a higher frame-rate while gaming, which results in less lag, and prevents turning your game into a slide-show at moments of overload. Clock speeds are not the same across the board, as each brand has their own measurement system. So while a higher clock speed is good, it’s not an indicator of quality just by looking at this alone.

Frames Per Second (FPS): As opposed to clock speeds, this is a much better measurement to go by. Frames Per Second (or FPS) refers to the number of images rendered on the screen every second. A higher number is always better here, but most monitors have a max refresh rate of 60hz, meaning they cap out at 60fps. That’s a solid number to shoot for – but even a lower number can still provide a smooth gaming experience. If that’s still not meeting your needs, you can also upgrade your monitor to one with a higher frame rate, usually 120fps, that’ll support a more powerful graphics card.

VRAM: VRAM is the GPU’s graphical memory — it’s what loads up the images and videos of the game you’re playing, specifically when it comes to resolution and texture quality. The higher the amount of resolution and graphical settings that your game requires, the more VRAM you’re going to need. When your graphic card runs out of available VRAM, it attempts to share the data with your system RAM, causing noticeable lacks and lags in performance. Around 2-4GB is a solid range amount that’ll get you a pretty picture, but splurging for the highest amount of VRAM you can afford isn’t essential, as a higher number doesn’t necessarily mean an increased performance. For most 1080p games, 2GB should be enough to handle the load. But for heavy demands, 6GB is the way to go.

HBM: High-Bandwidth Memory is a type of memory within the graphics card that’s newer and doesn’t require as much storage space.

Fans: Good airflow is extremely important, as graphics cards (much like other components inside) generate heat that needs to be dissipated and kept away from hitting your motherboard. This is especially important with more than one GPU. While most units already contain fans built-in, another factor to consider is noise, as GPUs under a heavy load can quickly become a loud nuisance. If a noisy fan is likely to distract you, try to seek out a graphics card with a lower noise level under 40dB.

A good graphics card can make a world of difference when it comes to media like movies and games. Depending on your setup, and your gaming needs, these four picks offer a range of options to literally bring your PC up to speed.

Gamers have long known about Sapphire as a reliable manufacturer of graphics gear. For almost 20 years, the company has cranked out quality GPUs, and is the world’s largest supplier of AMD-based video cards.

A single 8-pin power connector is all it takes to get this beautifully designed graphics card up and running. With a Boost Clock of 1366Mhz and 256-bit memory bus, performance-wise this is an absolute beast, and you most likely won’t have to sacrifice anything on your graphics settings to adjust for it.

The exterior is aesthetically sleek too, and the red-streaked backplate features a cool and minimal design that looks great against any setup. There’s also a thermal pad between the backplate and VRMs that acts as a heat-sink, dropping the temperature by about 3 to 4 degrees, which can be a huge help along with the dual fans. The hot air escapes through openings that are integrated in the design, making it not only neat-looking but practical as well.

Ports are a-plenty here too, with two HDMIs, one DVI-D, and two DPs. 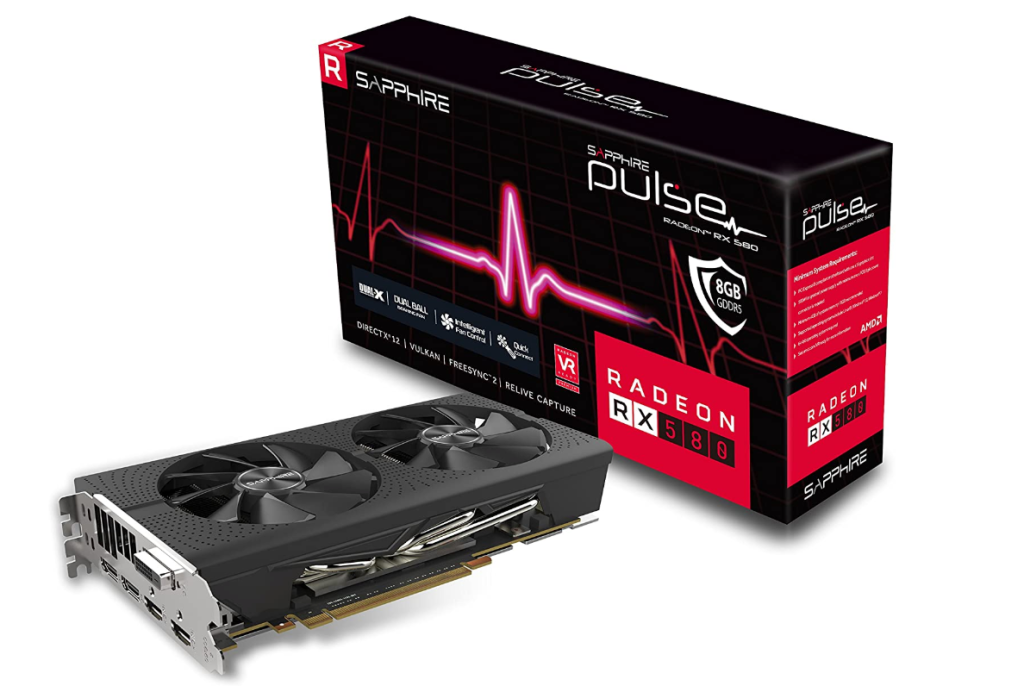 With 4GB of video memory, and a memory speed of 7108MHz, don’t dismiss the MSI just because it’s a little smaller than some of its competitors.

The red and black color scheme is instantly eye-catching, not to mention neat little artistic touches like the dragon logos and LED lit highlights on the back and side.

A thick heat-pipe snakes its way through the unit, making contact with the aluminum heat-sink as well as the GPU, while dual fans help cool things down fast. The printed circuit board (PCB) is a little larger than it needs to be, and also exposed since there’s no backplate, but this rarely interferes with the gaming experiences.

Installation is easy, and images run sharp and smooth, while the fans are often almost inaudible. This can connect through a 6-pin cable, and easily breeze through 60fps – pretty impressive for a relatively compact unit. 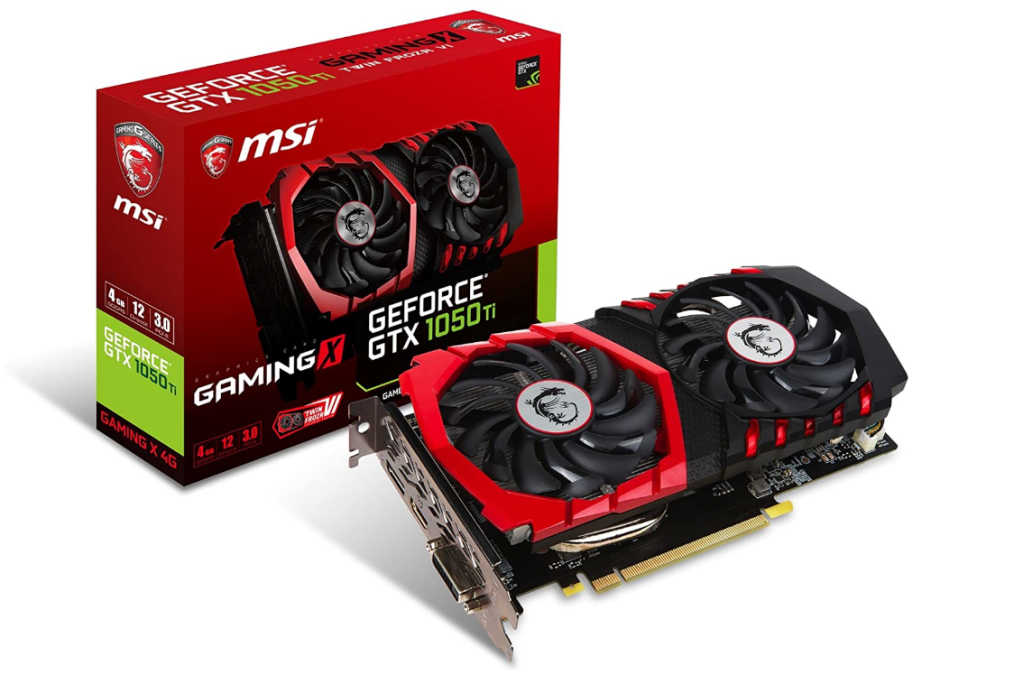 AMD brings their best game inside the VisionTek Radeon 7750, loading it up with powerful features to give you the edge over your online opponents.

The unit features Eyefinity Tech, which lets you expand across up to six displays with full wrap-around effect, so you can be completely immersed in your gaming experience – all with little to no lag.

AMD’s App Acceleration also kicks in to automatically correct colors, sharpen images, and reduce noise, with the ability to effortlessly take on the task of multiple monitors. 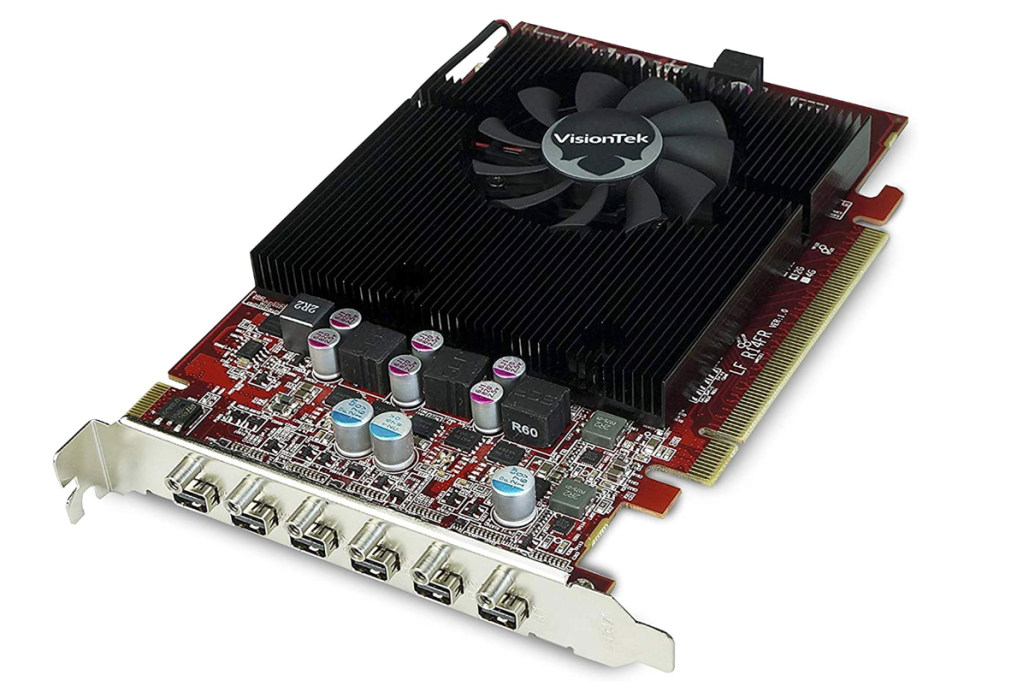 For those casual gamers looking to upgrade an older PC’s graphics card, the Zotac is a perfectly practical choice.

This features the NVIDIA GeForce GTX 1650 graphics coprocessor, as well as their new Turing Architecture, with a memory speed of 1620MHz.

Other than the display port, there’s a single DVI-D slot, along with an HDMI too. It’s smaller than most others, at under six inches long by 4.4 inches wide, with only one cooling fan. However, the upside is that it’s way less noisy than a bigger card, and generates significantly less heat. Gaming and 4K videos run pretty smoothly, and its max power usage is 75 watts – great for a system with limited power capabilities. 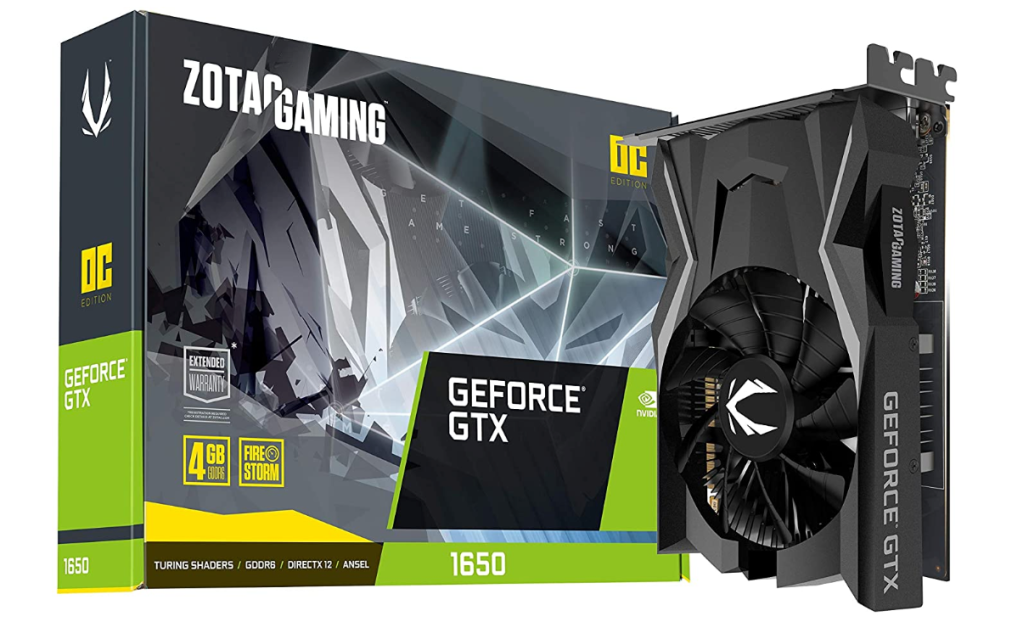