The rise of streaming may be dominating headlines in the music industry, but millions of people still purchase their music as MP3s. One of the most commonly distributed audio files used today, an MP3 is a compressed digital file that makes your music easy to download, share and store without requiring a ton of space — or taking up a ton of memory.

First rising to prominence in the file-swapping days of the late 90s, MP3s really began taking off as a serious music format a few years later, with the arrival of digital music platforms like iTunes, and pocket-sized MP3 players that replaced those bulky portable CD players that were never really quite portable enough to begin with.

These days, most portable MP3 players triple up as voice recorders and video players too, and they’re also engineered to play other file formats besides just MP3 (I.e. WAV, APE, FLAC). And while you may currently be using your phone to listen to music, switching to — or switching back — to an MP3 player will actually help free up space on your device and prevent your phone battery from draining so quickly. Phones are also larger and heavier, and if you want to take your music on the go — say, for a workout or run — a portable MP3 player will be significantly easier to carry and more lightweight. A portable music player is also great if you want to disconnect and listen to music and not be reachable. Phone goes off, but music stays on.

When looking for the best MP3 player, consider how you’re going to use it and what you’re listening to. If you’re using it to accompany your exercise, pick a player that is small enough to tuck into a running belt or light enough to strap around your arm. Unlike those portable CD players of the past, MP3 players are built for movement, so you never have to worry about your songs skipping or any physical components (I.e. a CD) falling out. And while MP3 players aren’t waterproof, most of our picks are durable enough to take a few dings and nicks without incurring any damage.

The next thing to consider is how many songs you have in your music library. Most of the options on our list feature 16 GB of memory, enough for about 4000 songs, though they can support up to 128 GB with the addition of a micro SD card.

One last thing to keep in mind: these MP3 players store your off-line digital collection of music. They are not streaming music players, so you won’t be able to stream music, but you will be able to easily access your purchased or downloaded media files.

Ready to put the phone down and enjoy crisp, clear music distraction-free? Here are the best portable MP3 players to pick up.

The classic Sony Walkman gets a modern makeover with this surprisingly powerful portable music player. This palm-sized MP3 player is bigger than an iPod Nano but smaller than your cell phone. It has 16 GB of memory and delivers CD-quality, high-resolution audio, while Sony’s audio technology and its S-Master HX digital amplifier upscales your files for purer, less muddled sound. A ton of users actually say they heard more clarity and detail with the Walkman than with their iPod.

Plug in a pair of headphones or flip over to Bluetooth to connect with a pair of wireless buds. Get up to 45 hours of playback on a single charge. Set it to “standby mode” to conserve battery when not in use; plug in the included USB cable when you need to power back up.

CONS: No WiFi connection so can’t use with streaming services. 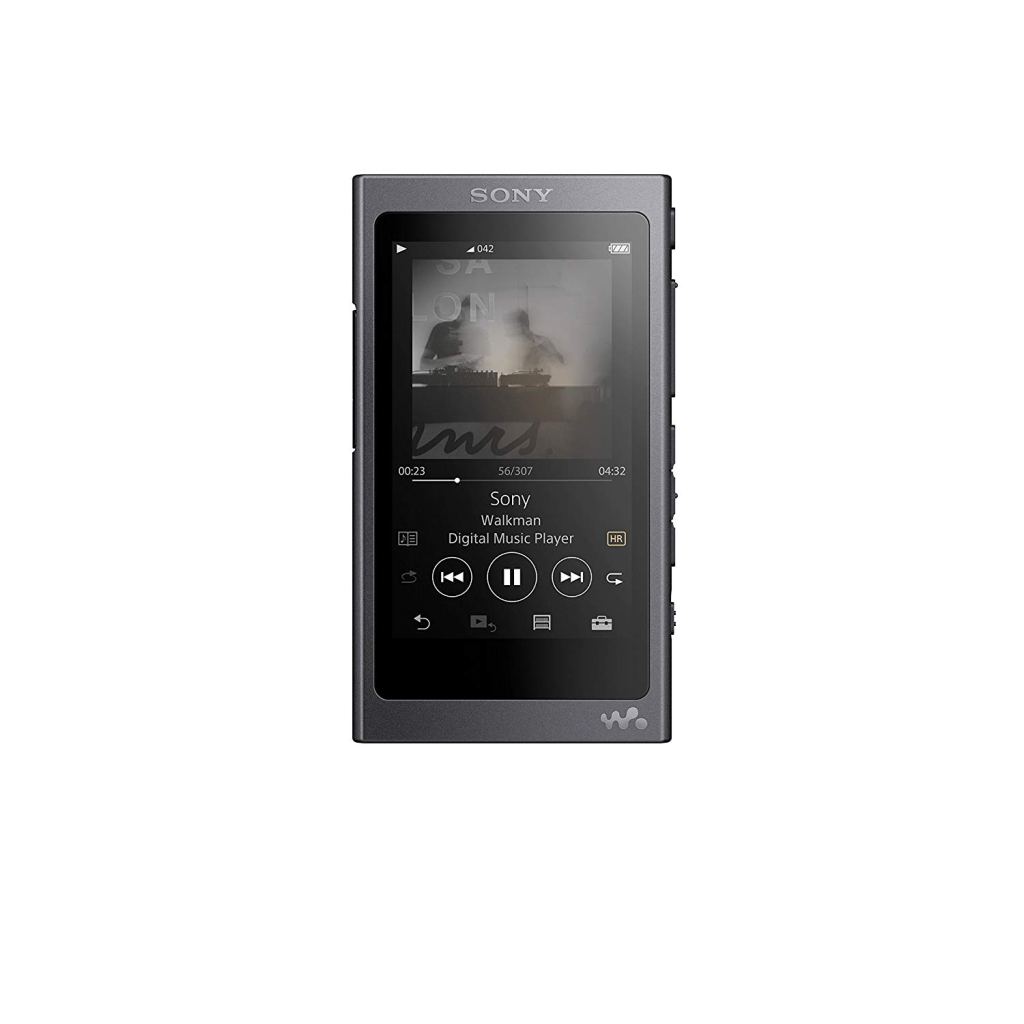 This multi-functional device delivers a ton of value in a tiny package. This unit acts as an MP3 player, radio, voice recorder, e-book reader and step counter, while built-in speakers let you use it as a mini boombox if you want to listen sans headphones, too.

The MP3 player features 16 GB of memory and the battery lasts up to 55 hours on a two hour charge. Bluetooth 4.0 lets you connect your music to a Bluetooth speaker or a pair of wireless headphones.

Users say the menu and buttons are super easy to use, and they say the sound quality is clean and consistent.

This package includes a MP3 player, USB cable, headphones and a sport armband to let you strap the player around your arm for easy listening on the go.

PROS: 12-month warranty. A ton of features and value for the price point.

CONS: This player lets you download e-books to read as a text file, but is not compatible with audiobooks. 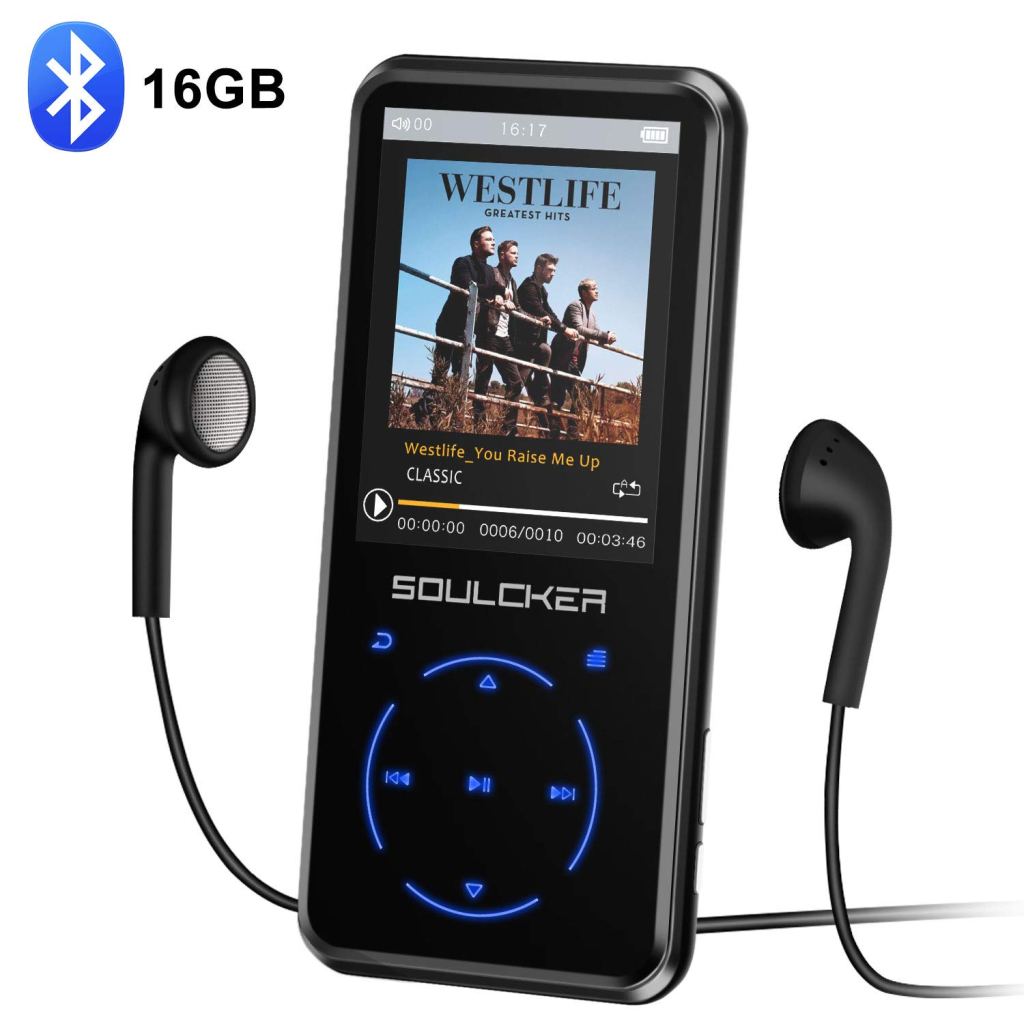 If you’re not picky about your audio and just want a simple MP3 player to take your music on the go, you can’t go wrong with this unit from Cocopa.

It won’t get you the crisp, detailed audio as other sets, but for less than a steak dinner, you get a lightweight, Bluetooth player that also double as a pretty decent voice recorder.

A single charge of 2-3 hours gets you up to 60 hours of playtime and 20 hours of voice recording. This MP3 player has a built-in 16 GB memory card to hold thousands of songs.

PROS: Made from a sturdy metal construction. Users say this MP3 player was easy to set up and start using right out of the box.

CONS: Sound quality is solid, but if you’re looking for richer audio and bigger bass, you’ll want to consider a different option. This is not a touchscreen. 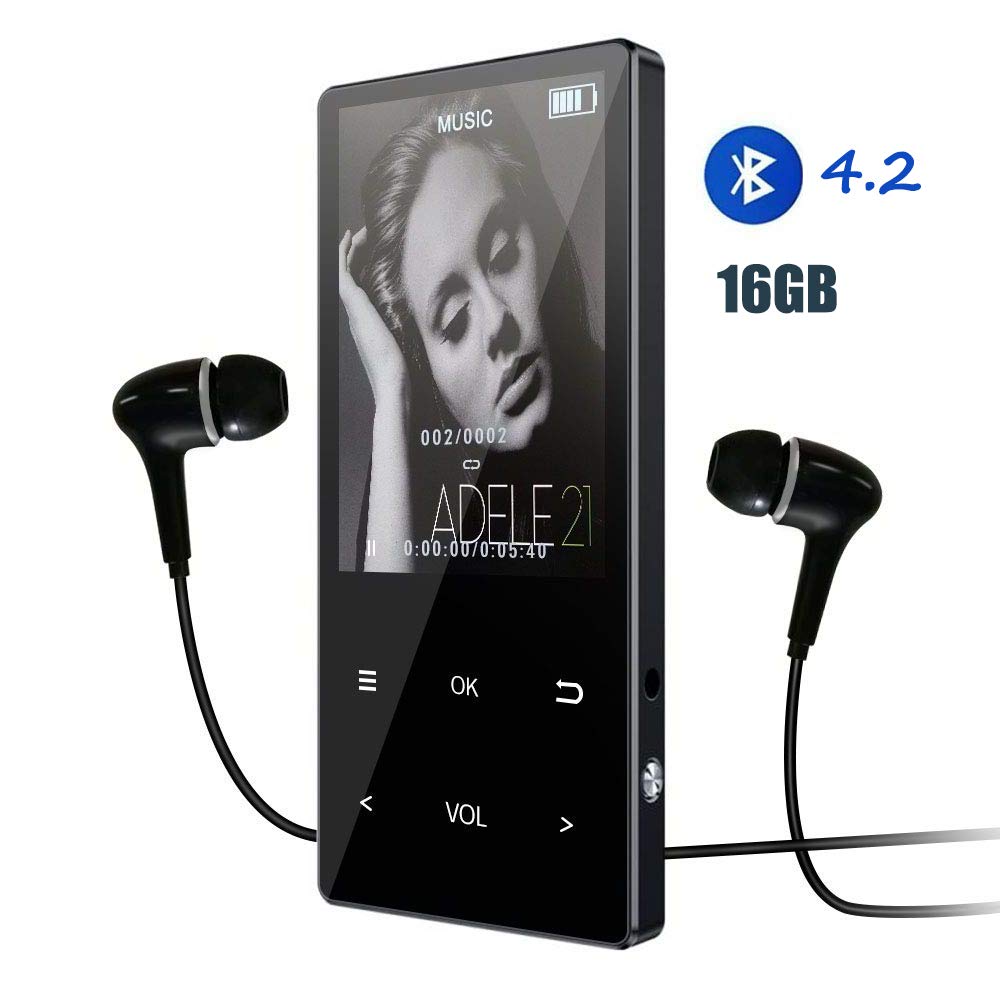