The Best Microphones for Singing, Presentations and Podcasts - Rolling Stone
×
×

Testing, testing, is this thing on? You may have something important to say, but unless you’re using a reliable microphone, you may not be heard.

Whether you’re singing in front of a live audience, speaking at a conference or just recording a podcast at home, the most important piece of equipment you can invest in is a solid mic.

Take it from Kate Tempest, a rapper, playwright and spoken word artist who’s collaborated with everyone from Sinead O’Connor to Bastille. According to Tempest, a microphone could make or break your presentation or show.

“If my sound is good, the show will have a better chance of being a great show,” she says. “Knowing that I have a reliable, detailed, powerful mic gives me confidence. It makes the sound check more enjoyable and it gives me every opportunity to sink deeper into the flow and performance and not be distracted by sound issues.”

Microsoft Just Announced New Tablets, Laptops, and a Phone -- Here's How to Get Them

It’s not just for performers either. Microphones are used in event spaces, lecture halls, places of worship and sporting grounds, to do everything from making announcements to amplifying a rally cry (“Let’s go Dodgers!”). You’ll want to look for mics that are lightweight and comfortable to hold, but also ones that deliver crisp, accurate sound. The best microphones to buy should be sensitive enough to pick up all the different tones of your voice, whether you’re whispering or belting out a tune.

For Tempest, who’s performed at places as massive as Glastonbury and as intimate as the Old Vic, it’s important to find a mic that will replicate your voice as clearly and distinctly as possible. “I want my stage mic to get as close to my studio vocal sound as possible,” she says. “Because it’s just language I’m speaking, rather than singing, I want the sound to be as rich and wide as it can be. I want it to get the delicacy and the power of my voice across without the harshness that can come with live sound.”

Aside from the human voice, microphones can also be used to amplify the sound coming from instruments. Look for mics with good signal isolation and feedback rejection, to make sure there’s less crackle and more pop.

As for what you don’t want: “Feedback, harsh frequencies, two much honk and not enough breath,” says Tempest. “You also don’t want flat or sharp sound, which results in lack of depth or clarity.”

Whether you’re about to hit the stage or hit the podium, we’ve rounded up some decent microphones that will have you coming in loud and clear.

Sennheiser is one of the most-trusted names in the premium audio space, known for their ever-evolving sound technology and their rugged microphones that hold up to the demands of touring and everyday use.

Part of Sennheiser’s e800 series, made especially for vocalists, the mic uses a cardioid pick-up to hone in on sounds coming from the front while rejecting sounds to the side and rear. What that means: your voice is isolated for better projection and a more accurate capture.

Users say any feedback is kept to a minimum, and the mic reacts intuitively to your voice so there’s no need to shout or over-sing. The rugged, metal shell gives you a secure feel in the hand while an internal shock-mount system minimizes handling noise.

CONS: Some users say the sound is a little brassy and not as dynamic as other models on this list. This is great for live performances but you may want a more sensitive and detailed mic for studio recordings. 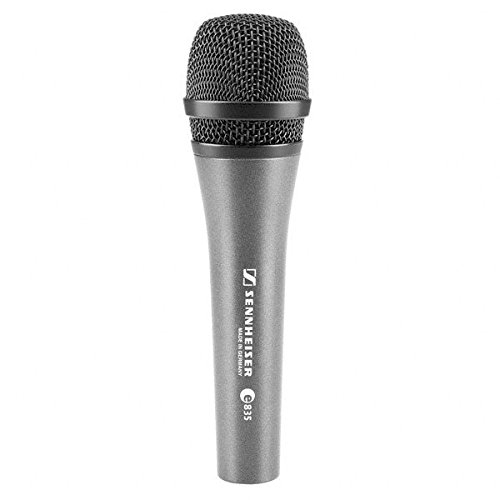 This condenser microphone set from TONOR gets you a lot of mic for the price. The package includes a microphone, shock mount, adjustable stand, table mounting clamp, pop filter, windscreen, phantom power supply, cables and more.

The cardioid polar pattern reduces any excess noise from the rear or sides, letting the mic focus solely on the sound source it’s aimed at. In addition to capturing voices with ease, users say it’s also great for picking up sound from instruments, with a consistent, even range.

The included shock mount is made of solid metal and TONOR says it can help reduce any trill caused by vibrations. Lock in the adjustable stand to prevent the mic from shaking or swinging, which could bring on unwanted wind or background noise.

PROS: The phantom power supply/amp is compatible with a number of different mic options, letting you swap the included mic out for other options down the line.

CONS: A sound card is not included. This condenser mic works with a laptop or desktop computer, but is not compatible with a phone or tablet. 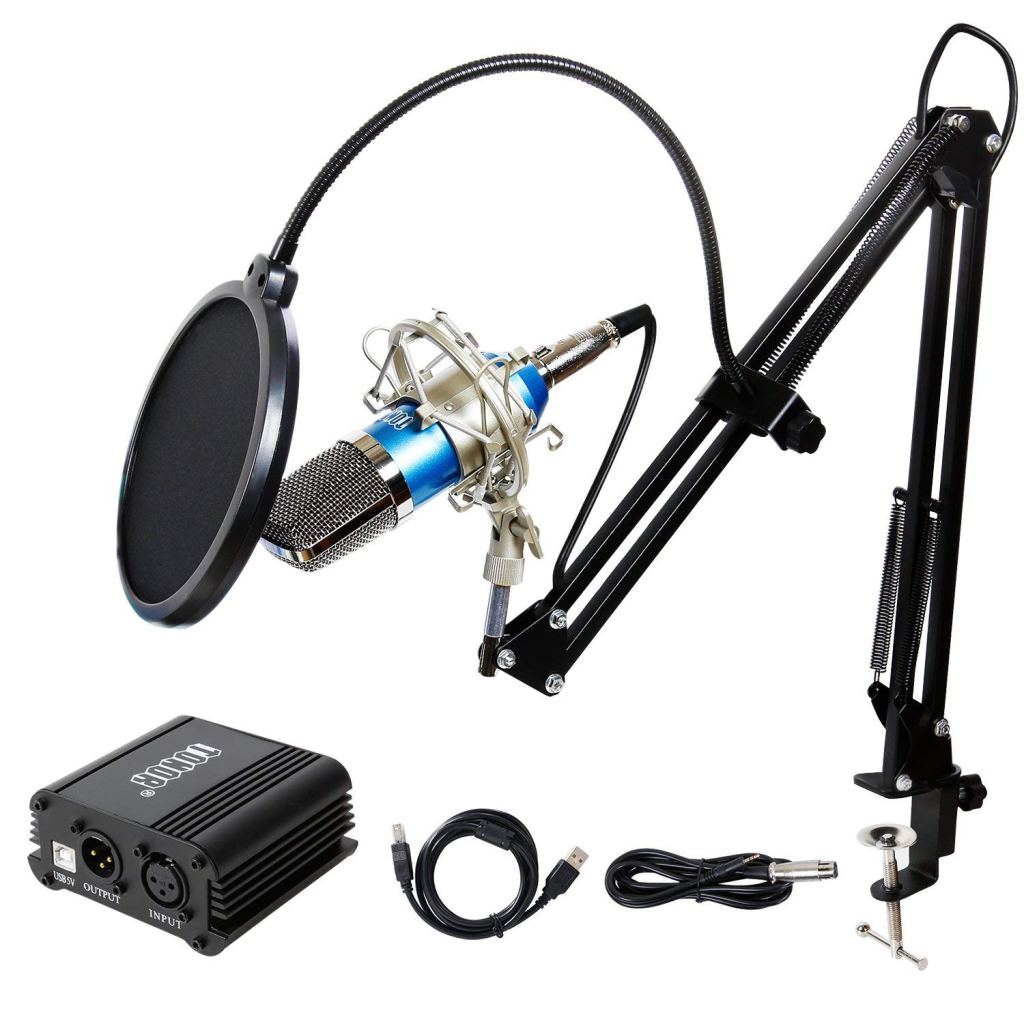 Whether you call it a wind screen, pop filter or mask, a microphone shield like this one is an essential item for recording.

By physically adding a layer between you and the mic, you’ll help reduce things like hissing, heavy breathing, accidental spit sounds (from over eager annunciations) or the dreaded “pops” that come from over-pronouncing your “b’s” and “p’s.” In other words, you’ll get clearer, more audible sound.

While most wind screens have just one layer, this one from Neewer features two layers. The first screen blocks out air blasts and pops, while the second screen contains any additional air that makes it past the first filter.

This set comes with a clamp, swivel mount and and adjustable gooseneck. Position the screen an inch or two from your mic for best results.

PROS: Block out excess noise from your recordings without having to resort to pricey editing equipment.

CONS: Users say the clamp takes a minute to tighten. 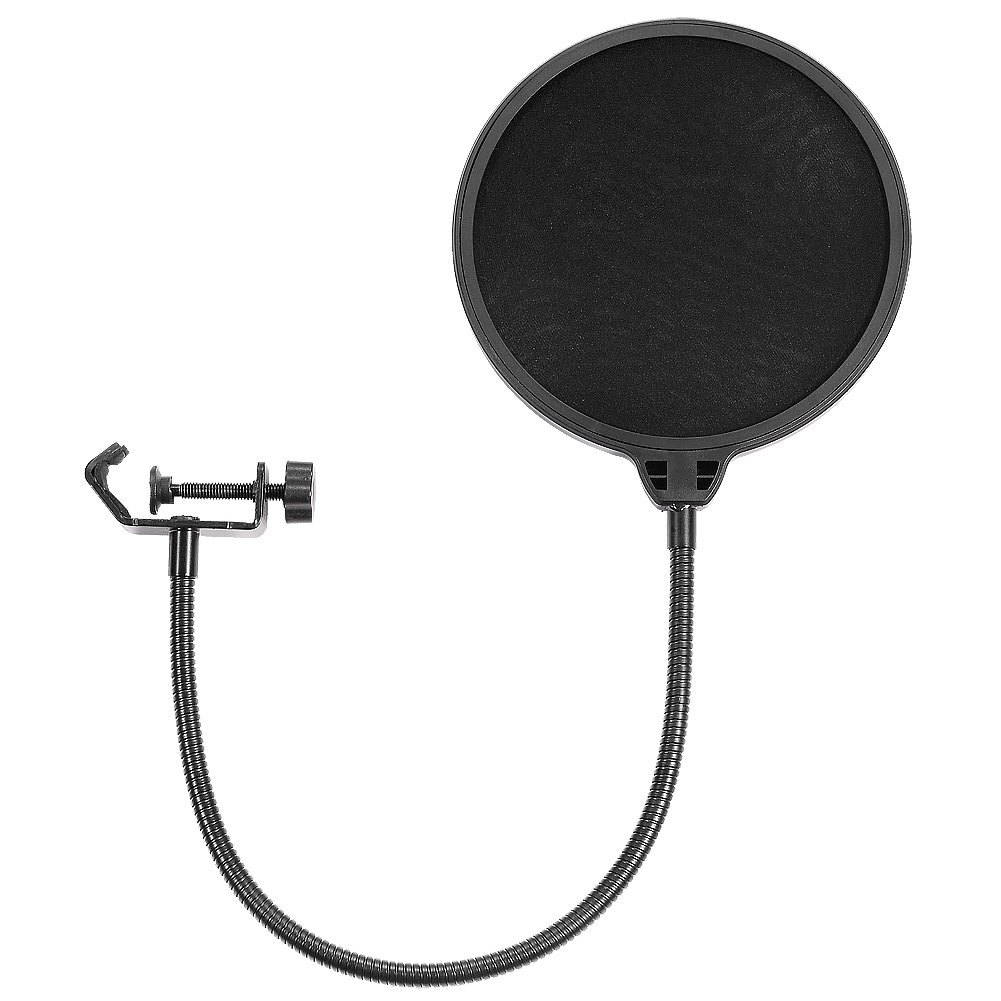