Once reserved for underground clubs and the more experimental set, DJ culture and electronic music has firmly found a place in the mainstream, thanks to artists like Calvin Harris, David Guetta and American DJ Nick Miller (a.k.a. ILLENIUM), whose latest album, ASCEND, debuted at #1 on the dance charts and has logged almost 200 million streams since it dropped in August.

For Miller, whose “ASCEND Tour” this fall includes dates at Madison Square Garden, Staples Center and three sold-out shows at Red Rocks (see dates and tickets here), DJ-ing has given him a chance to share his love for music — and his love for spontaneity — with the masses. “Being able to surprise people gets me excited,” he says. “One second, everyone can be expecting one thing, and I have the ability to totally flip that. It’s a pretty amazing feeling, and to see everyone’s reaction is priceless.”

Samsung Launches BTS Promo, With the Galaxy Buds+ BTS Edition Marked Down to 50% Off

While Miller has grown from club dates to playing arenas, the popularity of DJ-ing has also extended into homes and apartments, with a ton of companies making starter sets for fans and casual enthusiasts eager to start spinning. While a turntable is perhaps the best-known piece of DJ equipment, there are actually a few different components you’ll want to consider for your set-up. Chief among them: a DJ controller (sometimes casually known as a DJ set).

“A mixer takes in audio signals, letting you mix between tracks, and a turntable is a device that plays a vinyl or CD and allows you to pitch or adjust the tempo of the song,” Miller explains. “A controller is what activates different tracks, loops, FX, or a variety of different sounds or clips.“

While purists might prefer a traditional turntable and mixer, most DJs nowadays also work with a controller, which allows you to sync your sets up to DJ software and a computer. With everything rendered digitally, there is no need to carry around crates of vinyl anymore. Built-in components like jog wheels, encoders and faders, meantime, give you a ton of flexibility and mixing options in one convenient unit. A lightweight board wins bonus points for portability.

Getting the band back together 👏 Stoked to get back out on stage w @saidthesky @dabinmusic and @im.day 🎉 Support for all dates are now announced. Check my story to see who’s on each date. Lmk which dates I’ll see you at 😎 📷: @montanaisnotreal

Whether you’re spinning at an event or just playing around at home, we’ve found some decent DJ controllers that are deliver a ton of features in succinct, easy-to-use set-ups. From professional picks to beginner options, here’s what to get.

A professional DJ system that comes with all the bells and whistles, we like the XDJ-RX2 for its large, 7-inch touch screen, tactile performance pads and its ability to connect to a USB device to easily access your files and music.

The two-deck, two-channel system also delivers all the other features Pioneer is known for, like rotary selector, track filter, beat looping and Beat FX to easily cue up and mix in sound effects to your mix.

CONS: At roughly 20 pounds, it’s the heaviest option on our list. 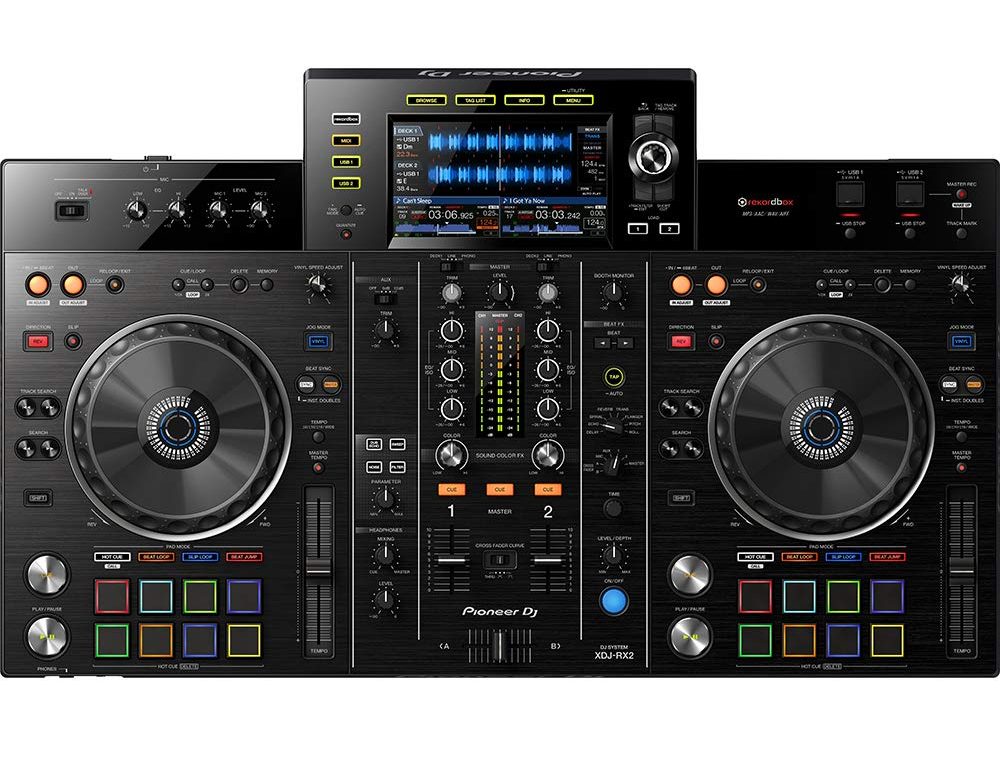 Great for beginners and pros alike, this DJ controller from Pioneer has an intuitive layout, with all the main functions laid out clearly in front of you for easy access.

CONS: Listing says this set includes Serato DJ software, but only the Serato DJ Lite version is included; to get the more popular and frequently-used DJ Pro, you’ll have to pay to download it. 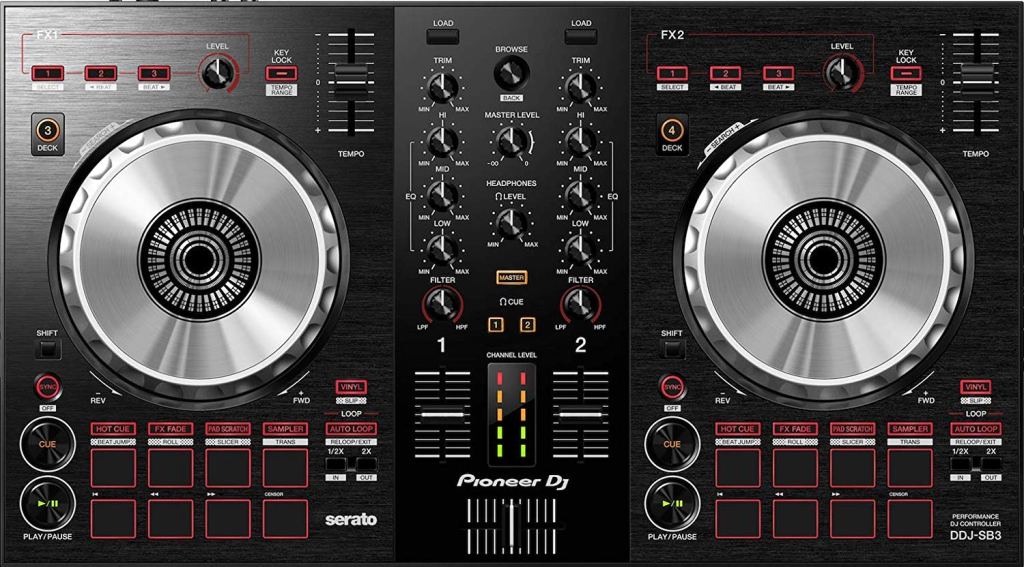 An easy-to-use two-channel DJ controller, this set from Numark wins points for portability and performance.

The essential functions are covered, with a jog wheel, crossfader and pitch controls, in addition to four pad modes, that let you do everything from looping to cuing tracks. Note: the jog wheel won’t work for scratching.

The audio interface has a 1/8-inch headphone output and 1/8-inch main output for connection to mixers and PA systems. We like the headphone cue buttons that let you listen through both sides to easily beat-match.

PROS: At just 12 ounces and 13 inches long, it’s the lightest, most portable option on our list.

CONS: No mic output or split cue; this set comes pre-mapped with Serato DJ Lite but some users say they had trouble syncing to other software. 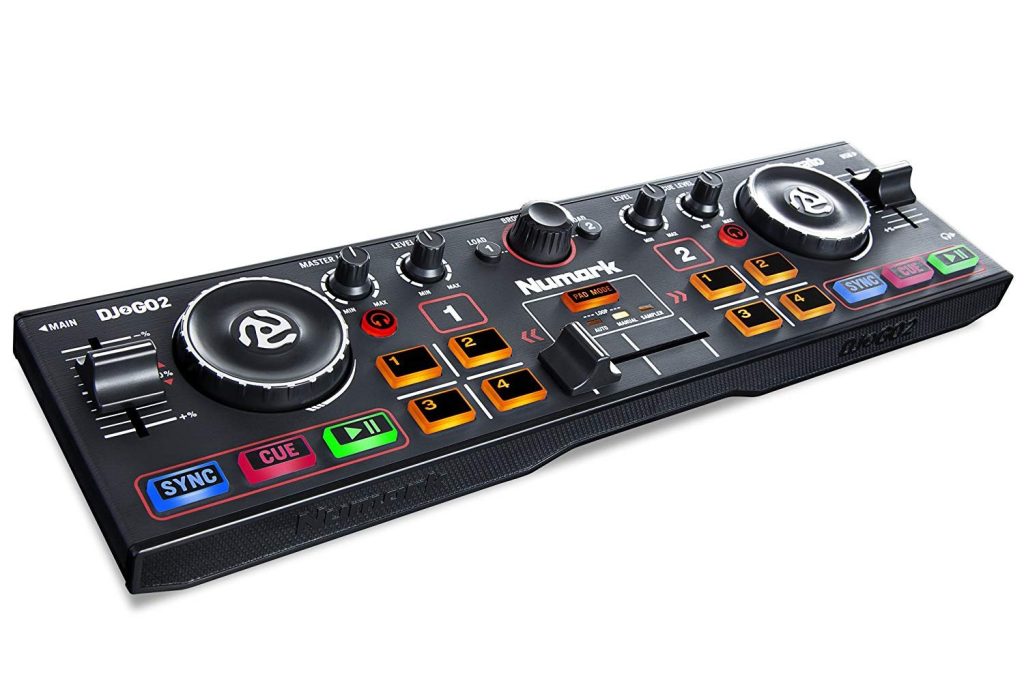