Laptops offer portability, but if you need raw power and performance, there’s no beating a traditional desktop computer.

Desktops don’t have the size or thermal constraints of a laptop, and don’t need to consider power consumption because they’re not running on battery power. This makes them a significantly better choice for high-intensity work like 4K video editing, or resource-intensive tasks like gaming. You can do these things on a laptop, but they’ll take longer and burn through battery life really quickly.

The trade-off is that desktops aren’t portable, and require a lot more space. This won’t be a problem if you need a computer for your home office but could get in the way if you’re used to working from public places, like your local coffee shop.

If you haven’t used a desktop computer in a while, don’t worry, we’ve researched the best ones available right now.

What Are the Best Desktop Computers?

There are many factors to consider when choosing the best desktop computer for you; below are the most important ones, which we considered while we were researching this list.

Operating System: The desktop computers in this guide either run Windows 10, the latest version of Microsoft’s OS, or MacOS, which runs exclusively on Apple hardware.

All-In-One Vs. Tower: Desktop computers come in two styles: All-in-ones, which means the computer’s components are built into a screen, or towers, which need to be connected to a monitor separately. Our guide features a mix of both.

Processor: All of the best desktop computers have a modern Intel or AMD processor, and are capable of running almost any task you throw at them without slowdown.

RAM: The desktop computers in our guide have at least 8GB (gigabytes) of RAM (memory). Having more RAM can help apps run more smoothly, and allow you to use more of them simultaneously without slowdown.

Storage: We’re recommending a desktop computer with between 256GB and 2 TB (terabytes) of storage. You won’t run into trouble with a smaller SSD (solid-state drive) if you stream most of your media, but you’ll need a larger one if you like to keep large video files or projects on your machine.

Upgradability: One of the biggest benefits of using a desktop over a laptop is the ability to upgrade it over time. This feature is only available on tower-style desktops.

Inputs: A computer’s inputs (known more commonly as ports), are what allow you to connect accessories to your machine. Each of our picks has a different assortment of ports, which you should strongly consider depending on how you intend to use your machine. All of them support WiFi and Bluetooth, though, so you have a range of wireless connectivity options, too. 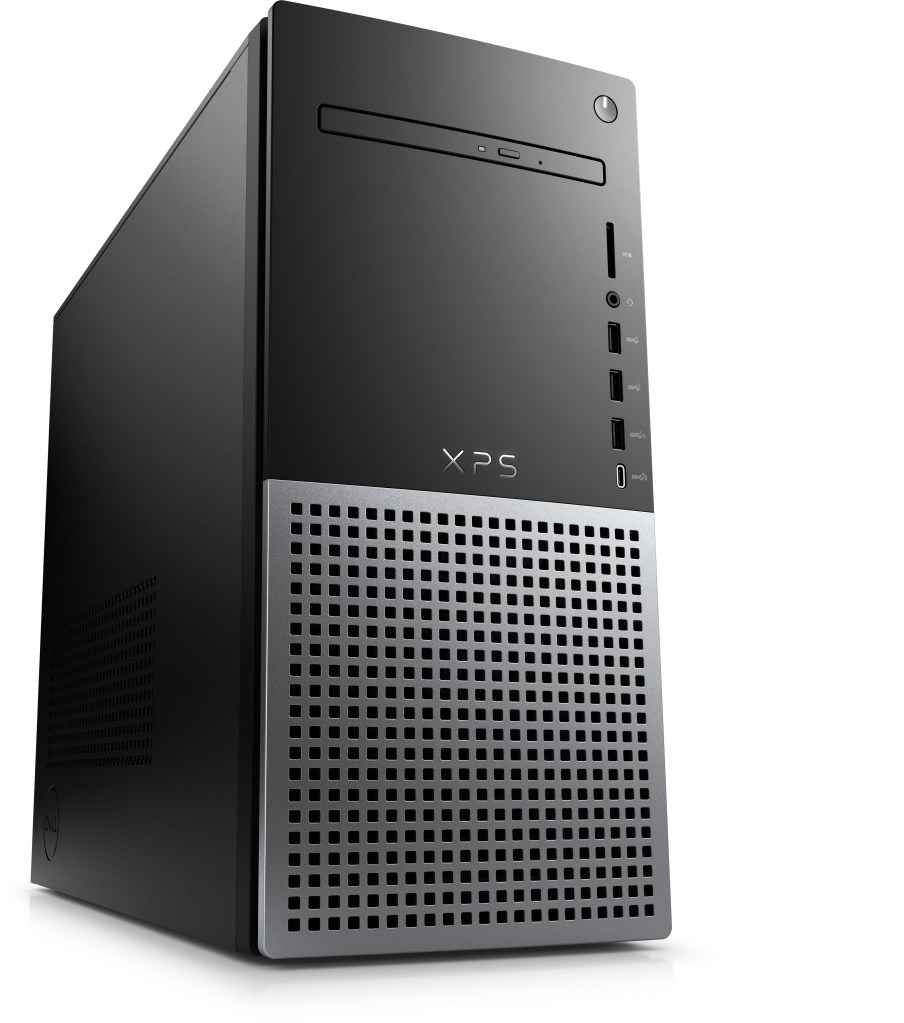 Dell’s XPS 8950’s mix of excellent tech specs and upgradability has earned it the top place in our guide.

This desktop is a tower computer that runs Windows 11 Pro. You can pick between 11th gen i5, i7 or i9 Intel Core processors, but we recommend upgrading to the 11th gen i7 or i9 for faster performance. RAM options also run as high as 64 GB, just in case you spend your time video editing in 4K.

Since there’s ample RAM, you should have no problem running a handful of resource-intensive apps simultaneously without any lag and never worry about running out of disk space. The high amount of internal storage is especially useful if you like to keep a large media library on your computer rather than streaming it from the cloud.

For graphics, you can either pick the generic Intel UHD graphics card or spend a little extra for either an NVIDIA GeForce or AMD Radeon graphics card, important if you’re looking to game on your new desktop.

As for connectivity, there are 10 USB ports, a microSD card reader, a display port, an HDMI port and multiple audio ports, allowing you to add extra screens and speakers to this desktop.

If you need a tower-style desktop computer that can handle anything you throw at it, and offers the ability to customize it as your needs change, Dell’s XPS 8950 is the best choice.

If you need a tower-style desktop computer for casual use, HP’s Slim Desktop is the right choice.

It runs Windows 11, and has a respectable set of tech specs: a 10th Gen Intel Core Processor, 16GB of RAM, and a 256GB SSD. You may run into storage issues if you have a large media library, but you’ll be fine if you prefer streaming videos and music instead.

HP’s Slim Desktop has four USB ports and a headphone jack on the front. HP doesn’t show the back of the machine, but says it has 4 USB ports and an audio in and out jack.

This computer is a good pick if you spend most of your time streaming videos, browsing the web and doing light work like word processing, creating spreadsheets and putting together slideshows. 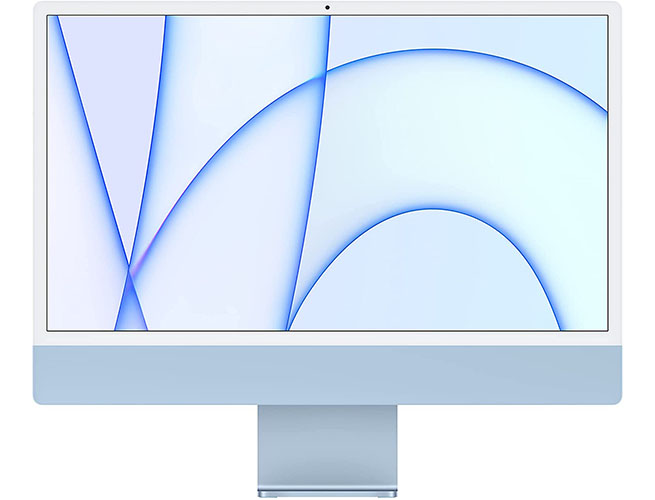 Apple’s 24-inch M1 iMac is the company’s latest-and-greatest desktop, and our recommendation if you’re in the market for a Mac.

This desktop is an all-in-one computer with Apple’s latest M1 chip for smoother performance — face little to no lag times on heavy-duty apps and multitask with ease.

This is a well-rounded desktop computer, but its marquee feature is a high-resolution 4.5K display. Get sharper images, texts and videos while you edit, video call or game.

This machine has the option for a 7-Core or 8-Core GPU and packs up to 512 GB of storage along with 8GB of RAM. It’s also got a 1080p webcam and microphone built into the top of the screen, so you can video conference with it right out of the box.

It’s even got a relatively low footprint featuring a build that’s just 11.5mm and a design that weighs less than 10 pounds. This means you can pack extra monitors or speakers easily onto your desk and connect it to your new Mac desktop.

Speaking of ports, the 24-inch iMac has four USB-C ports (including two Thunderbolt ports) and a convenient headphone jack for privacy. This assortment should allow you to connect all of your accessories to it at once without any adapters.

If you want a highly capable all-in-one desktop computer that runs MacOS, the M1 iMac is our go-to pick. 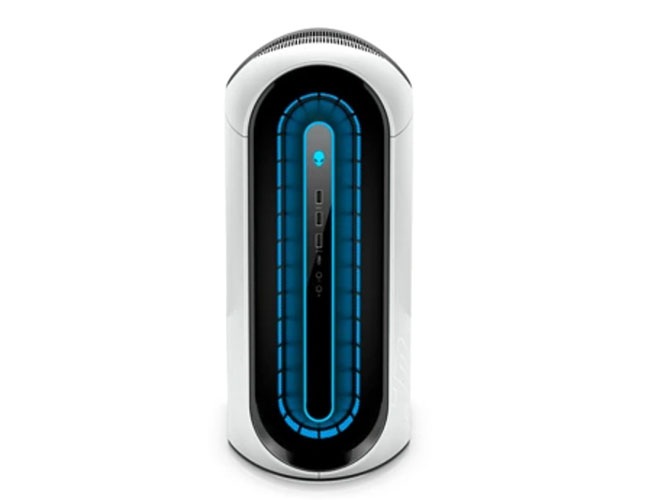 Alienware has been a mainstay in the gaming PC space for over a decade, and we recommend its Aurora R12 if you want to get more serious about computer gaming.

This tower computer runs Windows 11 and comes with some pretty beefy specs. It’s got an 11th Gen Intel processor, 16GB of RAM and up to 512GB SSD in storage. These specs are overkill for common tasks, but necessary to achieve and maintain a high frame rate (a measure of graphical fidelity) while playing games.

On the graphics side, the Aurora R12 comes with NVIDIA GeForce RTX graphics (RTX offers a more realistic picture). This card is powerful enough to play modern games at a high resolution, but you can upgrade it as new, more demanding titles get released.

Alienware says the Aurora R12 has an efficient new cooling system with a dual-axial fan design, allowing your desktop to stay cool as you game for hours. If a computer runs too hot, you run the risk of overheating it and eventually damaging it.

If you’re wondering about ports, the Aurora 12 has a total of 15 USB ports, an audio out, an ethernet port, and even a dedicated microphone input.

If you’re getting into PC gaming, and don’t want to build your own computer, Alianware’s Aurora R12 has a lot to offer. 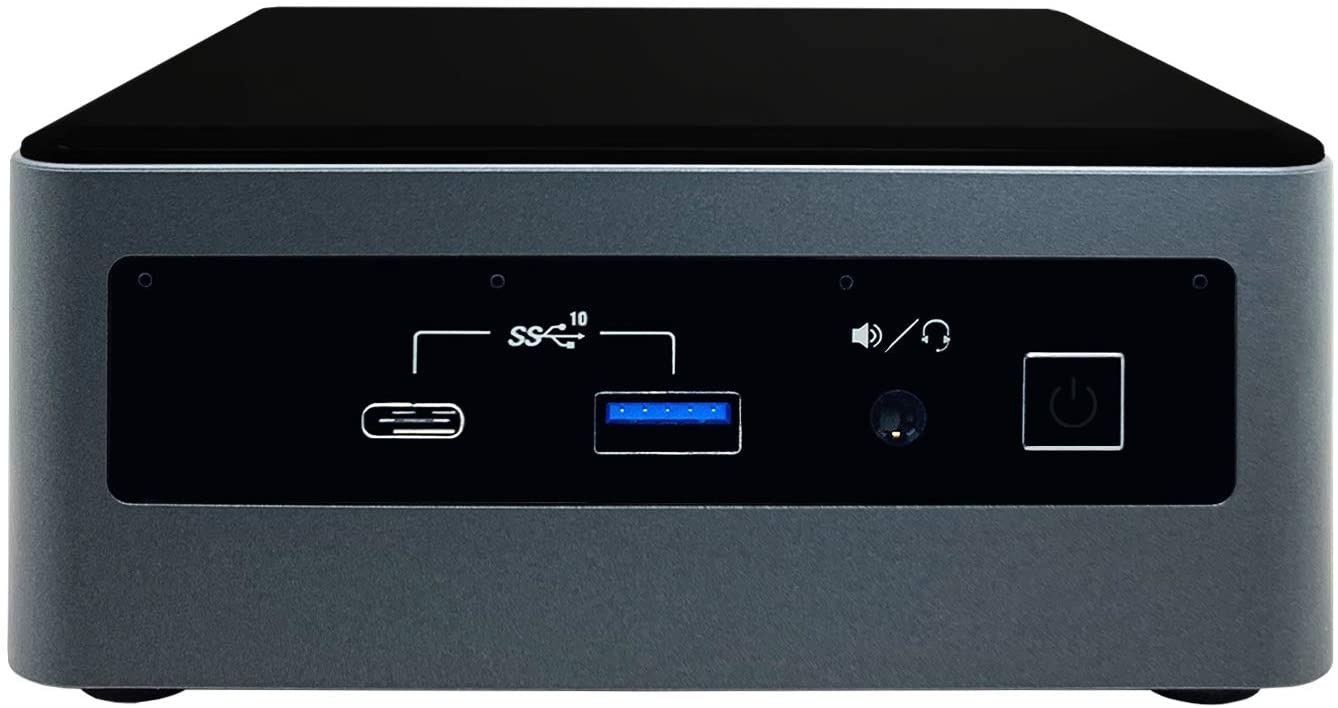 Intel’s NUC 10i7FNH is an extremely small desktop computer that offers impressive performance and features for its size.

This mini-tower is only two inches tall and 4.6 inches wide and runs Windows 10 Pro. It has a six-core Intel i7 processor running at 1.1GHZ, 32GB of RAM, and a 512GB SSD. The processor is a little underpowered if you want to run extremely power-hungry apps but fine for everyday tasks.  The computer’s ample memory and storage more than make up for this slight dip in processor performance.

The big trade-off when choosing a computer this small is that there’s no way to upgrade it. What you see is what you get. You can upgrade it using external accessories, but won’t be able to get inside the machine.

Intel has made this easier by this by stuffing the NUC10i7FNH full of ports. It has three USB-A ports, two USB-C ports (one is a Thunderbolt 3 port), an Ethernet jack, and an HDMI output. This assortment of ports should allow you to connect the necessary accessories to make this machine work for your specific needs.

If the only thing keeping you back from getting a desktop computer is their size, and you don’t mind sacrificing some performance to get there, we highly recommend Intel’s NUC10i7FNH.