No matter what type of vehicle you’re driving, or even how often you drive, a dash cam is a small addition to your setup that can save you a lot of headache later. This small camera monitors the front (and sometimes rear) of your car, constantly filming and saving the footage in case of any accidents or even close calls.

But the criteria is different than just buying any camera. If you’re considering getting one, we’ve broken down what to look for in a reliable dash cam.

What Makes a Good Dash Cam?

Video: The sharpness and clarity of a camera’s video is its main feature. This isn’t just about crisp resolution either – a camera that captures details can make all the difference when it’s someone’s license plate (or even their face) after a hit-and-run. Things like a better bit rate will contribute to quality, as does dynamic range, which adjusts automatically for shots that have contrasting lighting. But the difference after the sun goes down can be literally night and day. A low-quality video at night can look too dim and blurry to really even see anything, rendering it pretty useless if you need to see surroundings in the dark.

Audio: While video is most important, audio quality comes into play too. Voices can sound muffled and distant with a poor microphone, so if you’re looking to record conversations as well, make sure it has a mic that can pick it all up.

Mounting: Suction cup mounts make it easier to move the unit around, and to pop it off to take with you once you arrive at your destination to deter thieves, but it can fall off with changing temperatures. Adhesive is another option, and can greatly reduce vibrations, but is much harder to move once it’s in place. You can also purchase a mount separately if the included one isn’t working for you. Other options include clipping or strapping it to your rearview mirror, though these are rarer to find, and can be more obstructive to your line of sight.

Screen: On-screen notifications are extremely helpful too, alerting you as to when your connection is broken or the SD card isn’t fully in. Some units also include a rear camera, to record what’s happening behind you at all times, and can swivel sideways to capture what’s going on at your driver or passenger window – ideal for a police stop. Rear cameras can be a separate unit that connects through a coaxial or USB cable, wirelessly, or even just a rear-facing lens in the main unit which films you and your passengers as well, making it perfect for Uber and Lyft drivers. Alternatively, some units have no screen at all, and link up through a smartphone app.

Battery: If a dash cam is powered through your car’s ports, why even bother with a battery? The simple answer: to keep the camera rolling after your car loses power or is shut off. Lithium-ion is the go-to since they’re cheap, charge fast, and give you that extra time needed after an accident to review your film or keep recording the scene.

Storage: It’s most likely going to take an SD card, and that’s not always included. Plus look carefully as to where all this footage will be saved. It adds up fast, and usually loop-records over itself, so if you’ll need to save it all for something like work reimbursement, go for one with massive storage abilities like in the cloud.

Resolution and FOV: Cheaper units can have a lens made of plastic instead of glass, causing glare and blur. The number next to an “f” represents the aperture, and lower means a wider view, allowing in more light and ultimately improving clarity.

Recording: Loop recording constantly keeps the camera rolling, and dubbing over itself over and over, unless you get in an accident or want to keep the footage.

Other: Features like GPS (to record speed and position, not give directions), infrared night vision, swivel cameras, and motion detection are available, and a G-Sensor that locks the footage after getting in an accident, so it doesn’t get recorded over – though a too-sensitive one might mistake small speed bumps as a collision and lock the file down. Motion detection can catch vandals as they get close to your car, and even start recording as they approach to nail them in the act.

The Aivo’s recording resolution is astonishingly crisp and clear at 1600p, capturing a 140º FOV.

High-definition videos and photos can be taken with a simple voice command, along with the ability to see a live view remotely through the well-designed iOttie app (a Bluetooth remote control is included too).

“What makes the Aivo View unique among dash cams is its user-friendliness,” says Eric Kang, VP of the company. “Whether you prefer to control it via voice commands with Alexa, through the newly redesigned iOttie Connect App, or via the included Bluetooth button, drivers can easily take photos, download videos, share recordings, and so much more.”

This was quick and simple to figure out, as well as easy to mount and install in any typical vehicle. SD cards up to 128GB are supported, and the embedded G-Sensor automatically senses, and starts recording, whenever there’s been a collision.

“Drivers can manage every aspect of their device, says Kang. “[The Aivo’s] high-performance camera records images in full HD resolution, and its advanced safety features include WDR and a STARVIS image sensor that let you take photos and record videos at night, in direct sunlight, and everything in between.” 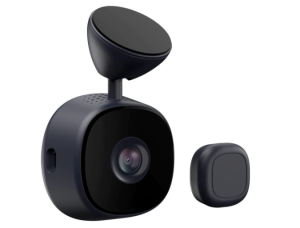 COOAU’s D30 dash cam doesn’t take up much windshield space, can be stealthily hidden behind your rearview mirror, and has a solid, weighty feel to it.

The unit includes a built-in rear-facing cam, in addition to the front-facing one, which performed well in low light thanks to the dual Sony IMX323 sensor and Novatek NT96663 processors on both.

Things like license plates and street signs are clearly visible at night, and these both film in HD at 1920x1080P at the same time, at 30fps. An aperture of F1.8 lets in a large field of view at 170° (150º for the interior), covering peripheral blind spots and adjacent lanes of traffic. Plus it swivels 360º horizontally and 60º vertically, to capture what’s happening all around you on the 1.5-inch TFT LCD screen.

If you live in a hot climate, the D30 can stand the heat. Its super-capacitor (instead of a heat-sensitive lithium-ion) inside can withstand temps up to 158ºF. Same goes for the other end of the thermometer, still going strong in freezing temps down to -4ºF.

An SD card stores your footage, and this easily connects to your phone’s FiCam app, and can send and receive videos via WiFi, along with altering settings and controlling the cam without having to take it down from the dash.

Its G-Sensor detects collision and instantly locks down the video file from being recorded over, and even lets you customize the sensitivity setting. When you’ve arrived at your destination, parking mode provides all-day and all-night protection, even when you’re away for days on end. 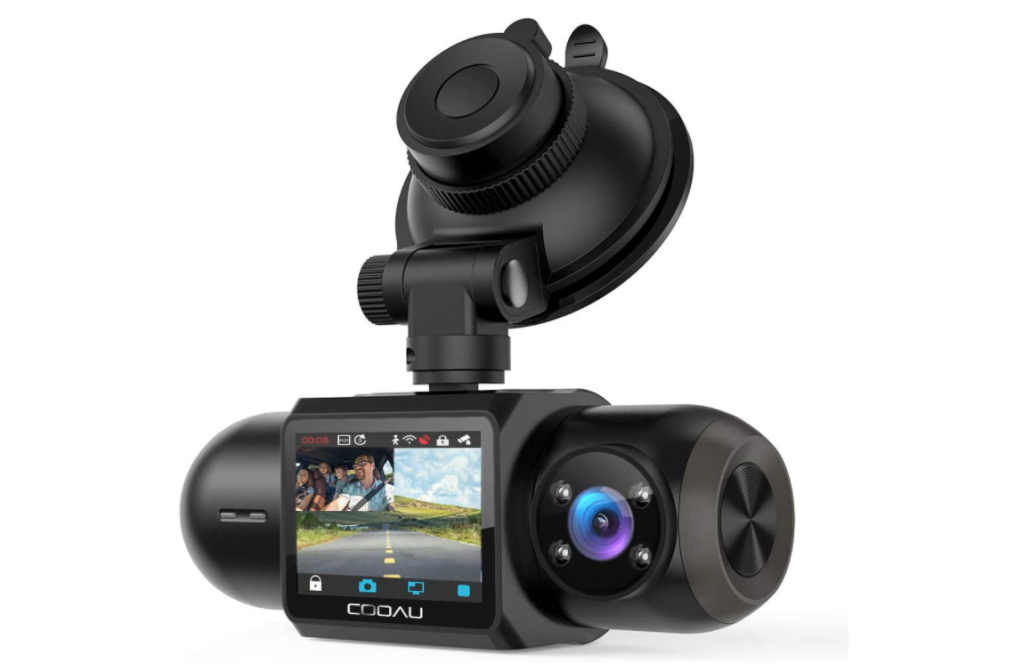 The Rove dash cam also harnesses the power of Sony’s image sensor for a pretty impressive picture quality in both the front and back.

The cam magnetically mounts to the suction cup, which gives you the freedom to move it around 360º. This covers a FOV of 150º in front, and can store up to 128GB on a MicroSD card. A handy “Snapshot” button also lets you quickly snap a still image or a 20-second video, which gets stored in its own separate folder so it doesn’t get lost with everything else.

A GPS logger is built-in, and footage from nighttime driving looks sharp and clear enough to read signs and plates. Plus, sound quality comes through loud and clear.

This is effortless and easy to install, making it great for those who aren’t tech-savvy. The accompanying app is well-designed, and puts you in control of reviewing and downloading past videos, altering settings, and even seeing a live view. 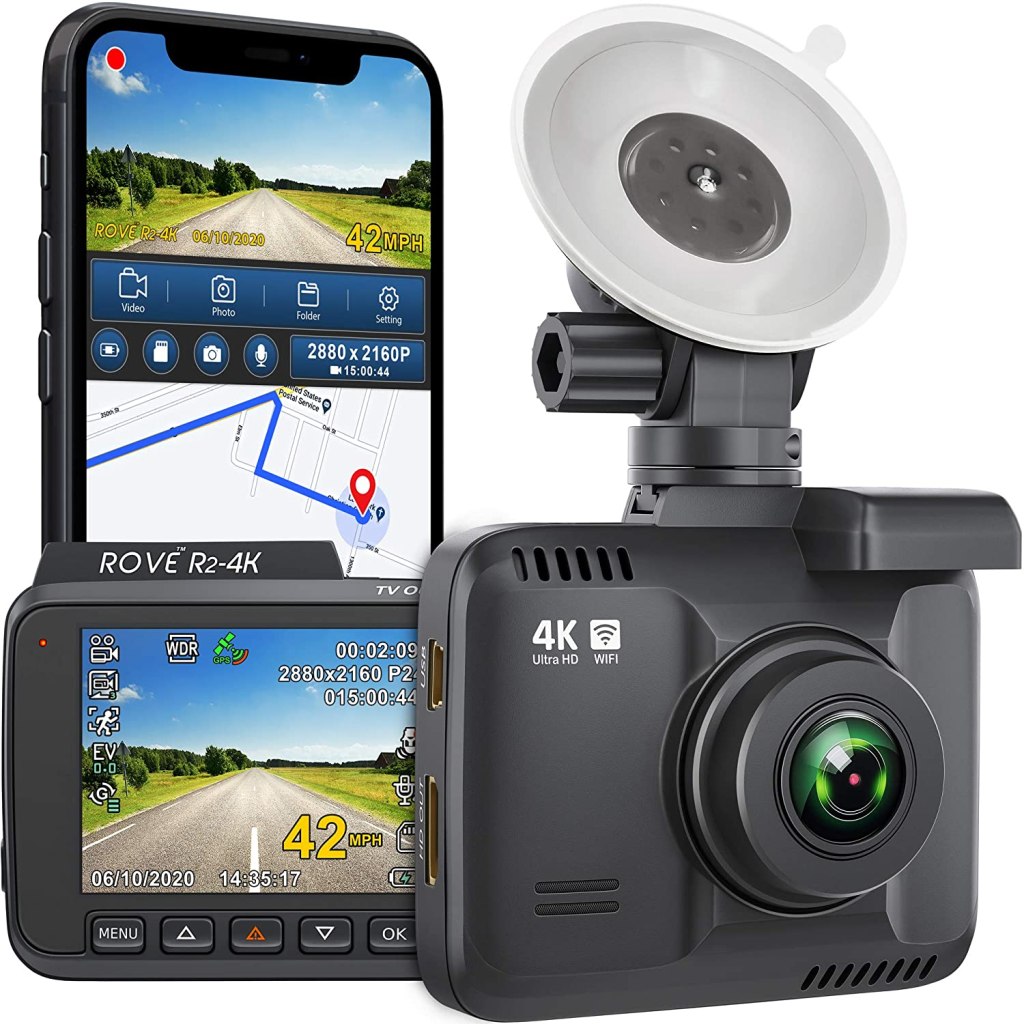 The Nexar’s exterior-facing camera records in crisp 1080p HD, covering 135º of view, with the interior camera capturing the inner cab at 720p – and driving at night is no issue thanks to its 10 infrared bulbs inside. The camera even auto-detects things like collisions on the road ahead, saving them just in case. And if you’re ever the unlucky one in the accident, their One Tap Insurance Report handles the post-collision paperwork along with statistics like the speed you were traveling, the G-force of the hit, and GPS location data.

Depending on the memory card inside, you’ll get different amounts of time that the footage can loop, but a 128GB card should get you about 16 hours. Pair this up with the Nexar app, and you’re ready to hit the road. The app instantly streams footage to your phone, and is ready whenever you need it immediately. And maybe the best part: a free, unlimited cloud account is included.