When you hear the term “home theater audio system,” it’s easy to only think about big 5.1 surround sound speakers, but that’s not always the case. Compact sound bars are a major improvement over the speakers built into your TV, and can fit neatly under it.

The major problem with TV speakers is that modern 4K TVs are designed to be as thin as possible, which means there’s not a lot of space for audio equipment. Compact sound bars may be short, but they’re still taller and wider than the speaker space inside your TV. What that means: these little “bars” help create a larger, more immersive soundspace than just using built-in TV speakers alone.

Better still, well-known audio companies and TV brands have begun making their own compact sound bars, so you’re not sacrificing audio quality if you get one. As a person who was skeptical about sound bars until I tried one, I can attest to the big difference they make in your home theater experience, even in a small living room or studio apartment.

What to Look For in a Compact Sound Bar

There are many factors to consider when choosing the right compact sound bar for you; below are the most important ones, which we considered while we were researching this list.

Size: We’re defining “compact” as sound bars under 30 inches long. These sound bars won’t take up a lot of space, and can be mounted on the wall under your TV set or placed on top of an entertainment unit or shelf.

Connectivity: Sound bars connect to your TV by getting plugged into ports like optical audio, HDMI, and RCA (red and white). Some sound bars have multiple ports, which allow you to use them with several devices at once, and other sound bars support Bluetooth, so you can stream audio to them wirelessly.

Smart Features: While you should get a sound bar to improve the audio quality of your home theater system, we’ve also chosen one that can be used as a smart-home hub.

Upgradability: All of the compact sound bars we’re recommending will sound great on their own, but some can be part of a larger audio system you can build over time.

VIZIO has become a popular TV company over the past few years, but its compact sound bar is no slouch. It measures 29 inches long, which makes it the largest compact sound bar we’re recommending, but it’s still relatively small compared to setting up an entire speaker system.

The SB2920-C6 has an optical, Aux (3.5mm), coaxial, and RCA inputs, plus an output for a subwoofer. VIZIO includes several cables with the sound bar, so you can connect it to your TV (and other devices) right out of the box. The only upgrade you can make to this sound bar is adding a subwoofer, so you can’t use it to build up a surround sound system over time.

This sound bar supports high-resolution audio formats like Dolbys DTS Studio Sound, DTS TruVolume, and DTS TruSurround when you use an optical cable. You won’t get real surround sound audio out of this sound bar, but it will mix 5.1 audio into stereo.

VIZIO covers the basics with the SB2920-C6, but it doesn’t have any smart features, and its upgradability is somewhat limited. Still, it’ll be a big improvement over your TV’s built-in speakers, and deserves more than a brief look. 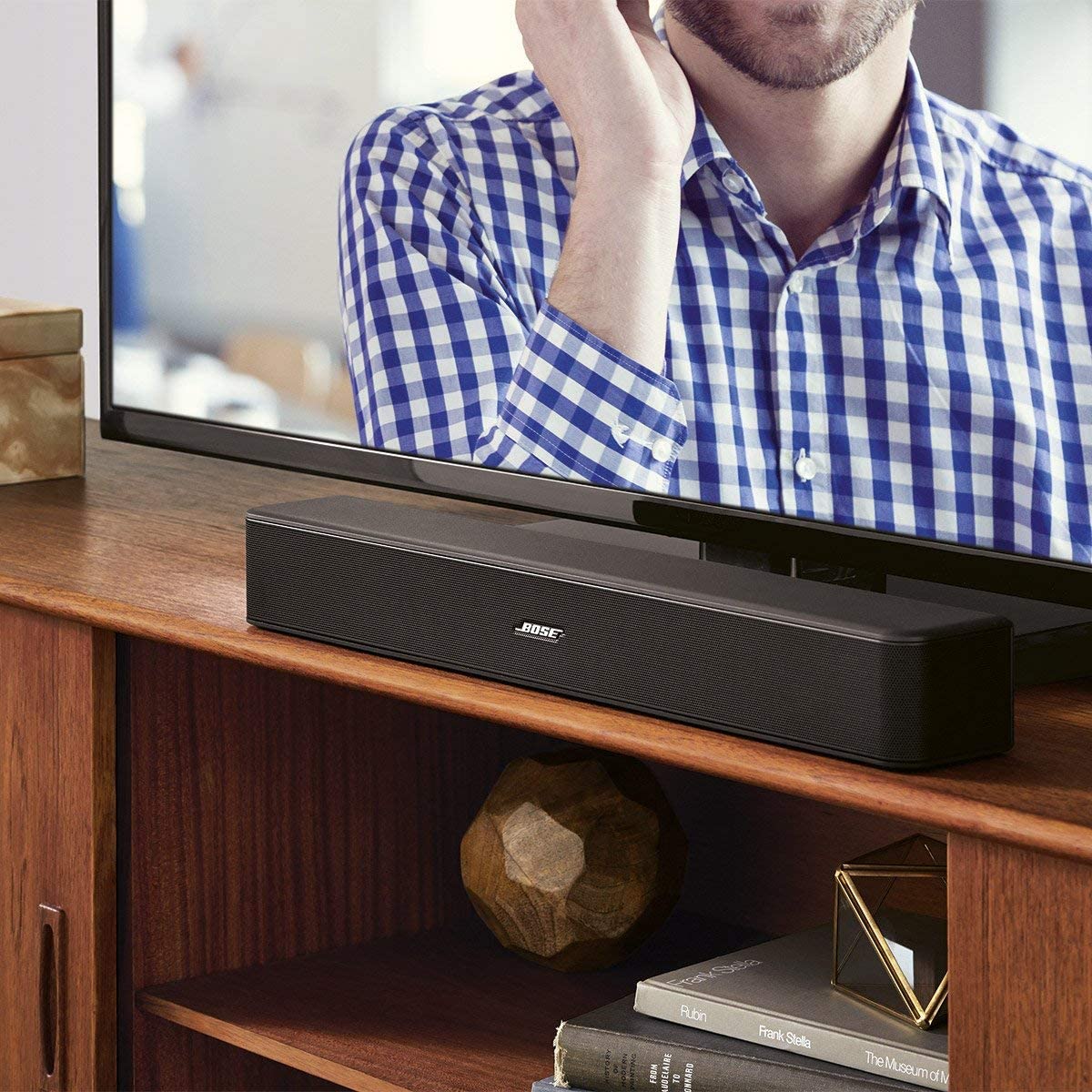 Bose has been in the audio game since 1965, and its Solo 5 compact sound bar is a great choice if you’re space-constrained. At 21.6 inches, the Solo 5 is the shortest sound bar in our guide, and it’s designed to be a self-contained unit.

The Solo 5 has three inputs: optical, coaxial, and AUX, which means you’ll be able to connect it to your TV, and any device with a headphone jack. It may not have an abundance of ports, but this sound bar supports Bluetooth, so you can stream music to it wirelessly from your phone, tablet, or computer.

It’s a little disappointing that the Solo 5 doesn’t have any smart features, but cramming a lot of technology into such a small piece of audio gear is difficult. Bose decided to dedicate the space to audio hardware instead, which is why you’re getting a sound bar in the first place.

If space is really tight, and you don’t need a lot of bells and whistles, we highly recommend the Solo 5. 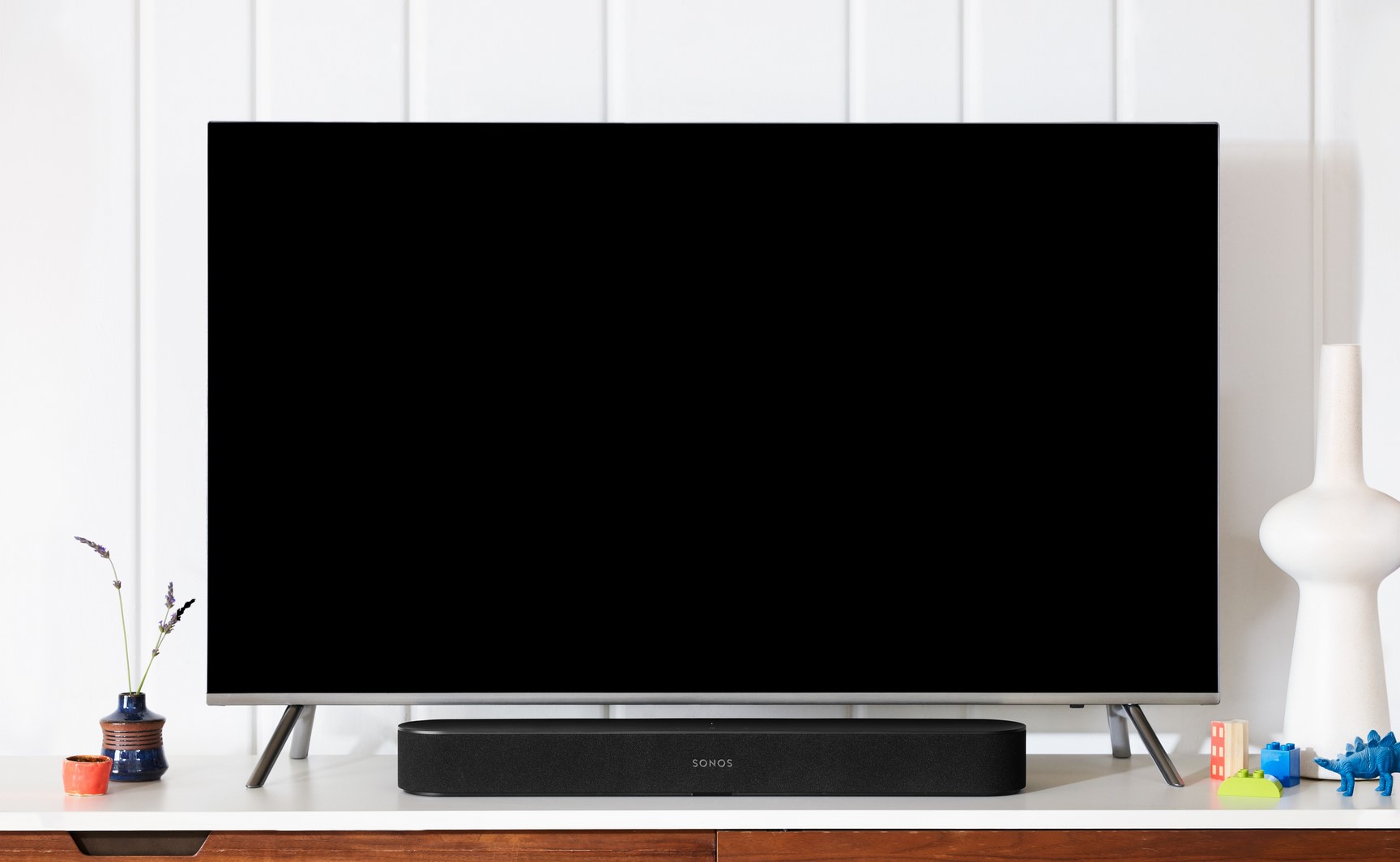 I used the Sonos Beam as my home theater audio system for almost a year, and it’s still the sound bar I recommend to my friends and family.

It’s 25.6 inches long, which puts it in the middle of the pack in terms of size, but it’s fully loaded with impressive features. The Beam only has one port — HDMI — plus an HDMI to optical audio converter it bundles in the box. This may seem strange at first, but HDMI and optical audio are the most widely used standards for stereo receivers and TVs.

Most sound bars have other ports to allow you to upgrade your system over time, and connect lots of devices to them at once. The Beam has all of those features, but Sonos opted to go wireless instead. This sound bar supports Bluetooth and AirPlay 2, an Apple-developed wireless audio standard that allows you stream higher resolution music from your iPhone, iPad, Mac, or Apple TV.

You can create a full 5.1 surround sound system by pairing the Beam with a Sonos SUB or Sonos One speakers. The Beam, Sub, and One speakers all need to be connected to an outlet for power, but connect to one another wirelessly.

The Sonos Beam is a smart sound bar, and can be set up to work with both Amazon’s Alexa and the Google Assistant. Once it’s configured, you can control the Sonos Beam with your voice. Voice commands can be used to play music from different streaming services, change the Beam’s volume, or control smart-home accessories.

These technical features are all great, but it’s the Sonos Beam’s performance that really stands out. In my experience, the Beam does a great job when listening to music, watching movies and TV shows, or playing video games. It held its own in scenes or game sequences where there was a lot going on, and dialogue was never drowned out by background effects. I was particularly impressed with how the Beam handled bass.

It’s no surprise that the most technically-advanced compact sound bar in our guide comes from one of the pioneers of modern audio tech, but the Sonos Beam delivers on all fronts.