Don’t call it a comeback. The boombox was a staple of Eighties and Nineties pop culture, and although they changed shapes and sizes, they never went away. Sure, you can stream music, but contemporary artists — from the White Stripes to Shawn Mendes — have started issuing their music on cassettes as a nod to the original portable music medium. As their name suggests, boomboxes are loud, delivering a lot of boom for your buck.

Original boomboxes aren’t being produced anymore, and can be expensive to buy secondhand, but that doesn’t mean you’re out of luck. We’ve found some great boomboxes that can do way more than just play cassettes. You’ll get the retro vibes you crave, and much more, without breaking the bank.

(If you want to wax nostalgic about the first wave of the cassette, we highly recommend Rob Sheffield’s Love Is A Mixtape).

What You Need to Know Before Buying a Retro Boombox

There are many factors to consider when choosing the right retro boombox for you; below are the most important ones, which we considered while we were researching this list.

Design: If you’re shopping for a boombox, you want it to look like, well, a boombox. That elongated shape has been burned into our cultural identity, so we found options that have the look down pact. That said, we understand that you may want a way to play cassettes without looking like they belong in an Eighties MTV video, so we’ve got a pick for you.

Modern Audio: Cassettes are great, but they’re a limited medium. Some of the boomboxes on this list can play CDs, the radio, and digital music through an AUX cable or Bluetooth. Our baseline was being able to play music on two formats, but most are capable of three or four.

Size: Boomboxes were praised for their portability; they basically let you bring an entire speaker system with you anywhere. But, the definition of portable music has changed in the past forty years. We chose boomboxes that are between 14 and 18 inches, and had handles that make them easy to carry. They’re bulkier than today’s Bluetooth speakers, but a lot cooler.

Portability: Boomboxes are meant to help you share music with your friends and family, so all of our picks can run on battery power, so you don’t have to be limited by an outlet.

It has a built-in AM/FM radio, with a basic display up front to show with station you’re tuning into. You can play music off a flash drive or SD card, plug in your phone with an AUX cable (included) or stream music over Bluetooth. There’s no CD player.

This boombox is 13.9 inches, which makes it one of the shortest options in our guide, so you shouldn’t have a problem carrying it around — even on your shoulder. You can plug this boombox into a wall with an A/C adapter, or run it portably with four D batteries.

PROS: A lot of ways to play music, nails the retro look, not too big.

Note: If you want a slightly bigger boombox with with same features, we recommend this $39.99 option from Milanix. 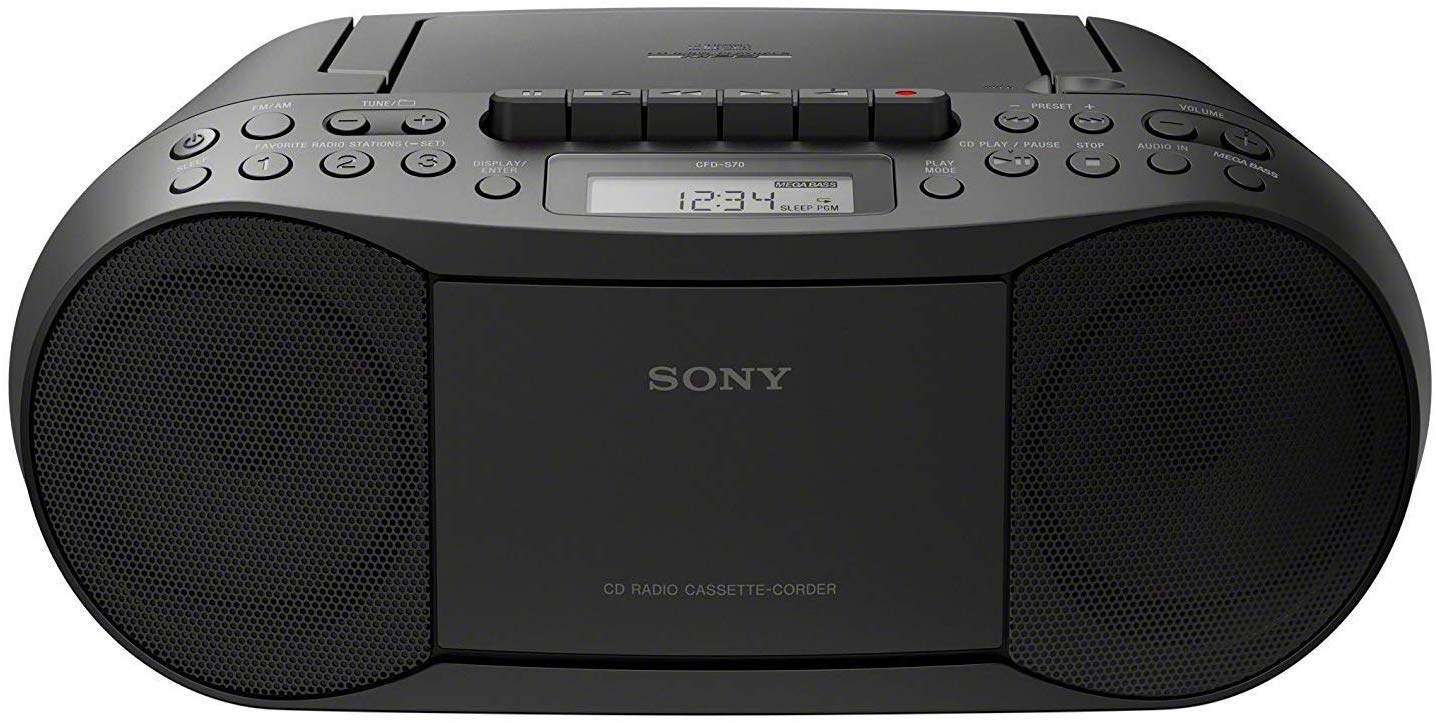 Sony’s Walkman defined the boombox era, and it’s kept up that tradition with contemporary-looking option. It can play cassettes, CDs, and digital music via a 3.5mm audio cable. At 13.41 inches it’s the smallest boombox on this list, so if portability is your priority, it’s a great option.

Like our other boombox picks, the CFDS70’s controls are on its top. You can switch between playing modes, adjust the volume and EQ between regular and MEGA BASS, and set three radio presets. A small, digital display on top can show your radio station, how much time is left in a song (CD only), or the time.

You can power it by plugging it into a wall, or with eight C batteries. Sony says you can get 18 hours on battery power, so this boombox would be a great companion for a beach trip. Its plain aesthetic doesn’t scream “retro,” but if you’re looking for a way to play cassettes without looking too conspicuous, Sony has you covered. 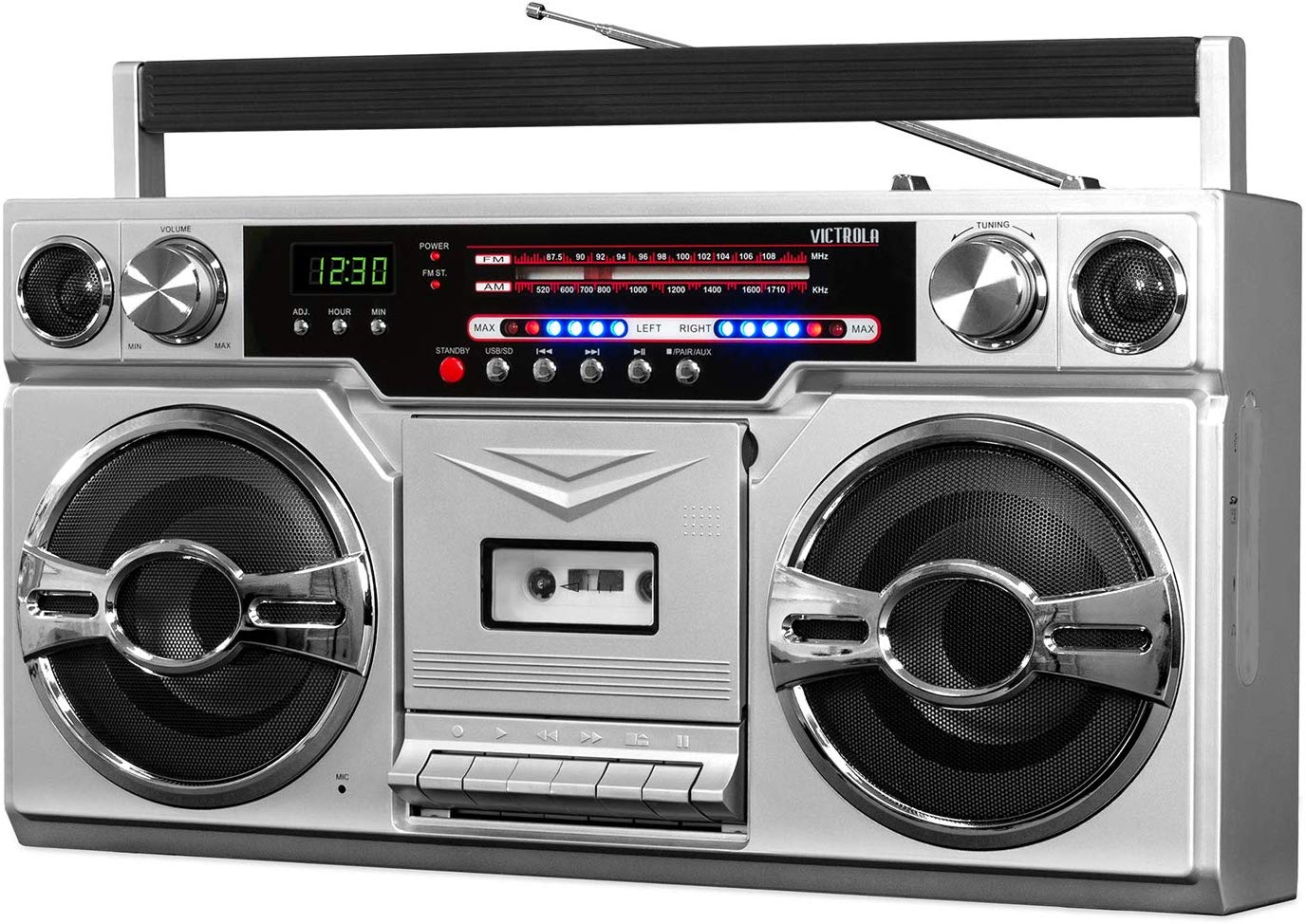 Victrola (originally called the Victor Talking Machine Company) has been making audio gear for almost 120 years. It’s an old-school company, and they went the extra mile to match the look of a retro boombox.

The front is full of buttons and knobs to control its front-loading cassette deck, volume, and other connectivity features. You can play music off a flash drive, SD card, or plug in your phone with a 3.5mm audio cable. It even has Bluetooth for wireless music streaming.

This boombox is 17.9 inches long, which means it’ll be a little difficult to carry, but the larger size allowed Victrola to stick a pair of big speakers into it. If you want a loud boombox suitable for a party, you’ve found it here. The only slight downside is that this boombox doesn’t have EQ controls, so you can’t adjust how it sounds with a quick turn of a knob.

You can plug the VBB-10 into an outlet, or run it portably with eight D batteries. That’s a lot of batteries, but it’s what you should expect for a boombox this large.

Cons: A little big, no EQ controls, takes a lot of batteries. 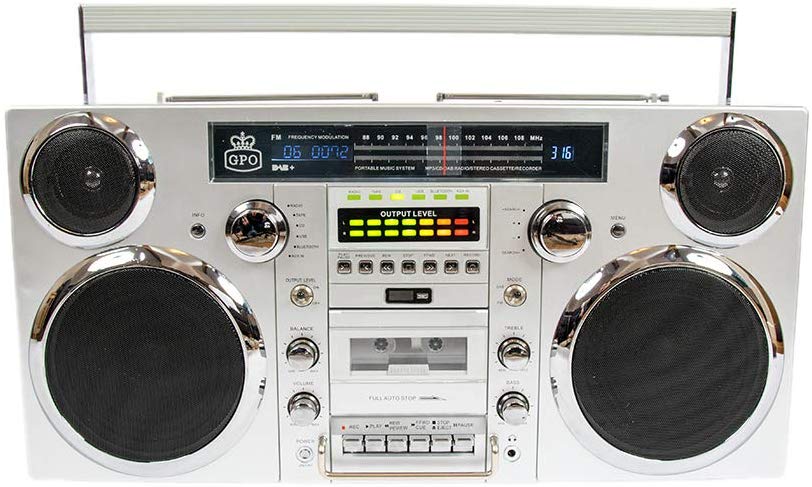 The GPO Brooklyn 1980S-Style Portable Boombox is a luxe option for people who don’t want to compromise on audio quality, modern convenience, or style.

The first thing that stands out is its look. At 23.7 inches this is a boombox that’s been super-sized. But GPO took a cue from Victrola and used that extra space wisely. This boombox has a pair of large, 40 watt speakers, and is fully loaded to handle every way you might want to listen to music.

Most of its controls are on its front size: EQ, volume, mode switching, radio presets, balance, and even a switch to control its lights. There are two screens: a wide radio dial, and output level that shows your music’s volume. The aux input, mic inputs, and aux out are on its right side.

All of the boomboxes in our guide can be plugged in or run on C or D sized batteries. This one has a rechargeable battery, which is a very nice touch.

Cons: May be too big for some people.