Whether you’ve been asked to DJ a party, or want to share your music collection with people at a park or beach, you’re going to need a good Bluetooth speaker.

While portable speakers have been around for years, companies both new and old have created wireless speakers with advanced audio features, longer battery life, and improved durability.

While you can’t deny the power (and the surround sound experience) of a full home audio system, these wireless speakers deliver when you’re out of the house, or moving from room to room. Some of the most popular speakers also come with smart home capabilities, letting you control your music and your connected devices using just your voice.

Best of all: the speakers on this list are easily paired with another speaker, letting you create a room — and house — full of rich, immersive and enveloping sound.

What Are the Best Bluetooth Speakers?

There are many factors to consider when choosing the best Bluetooth speaker for you; below are the most important ones, which we considered while we were researching this list.

Bluetooth: We’ve chosen Bluetooth speakers because the wireless standard has been widely adopted, so our picks will work with your phone, tablet, or computer regardless of who makes it.

Battery: Most of the speakers we’re recommending are totally wireless, which means they run on battery power. Our minimum requirement was eight hours of music playback for charge, but many of our recommendations last a lot longer.

Size and Weight: One of the benefits of getting a wireless Bluetooth speaker is the option to carry it around with you. Only one of the wireless speakers in our guide weighs over three pounds, and is over eight inches tall. The rest can be easily tucked into a bag or even your pockets.

Durability: An electronic device’s resistance to dust and water is measured on the IP (Ingress Protection) scale. Our minimum requirement for this guide was an IPX4 rating, which means the speaker is protected from dust particles larger than 1mm (millimeter), and splashes of water.

Multi-Speaker Pairing: A relatively new feature to Bluetooth speakers is the ability to pair two or more of them together to create a multi-room wireless audio system. All of the Bluetooth speakers we’ve researched for this guide support this feature. 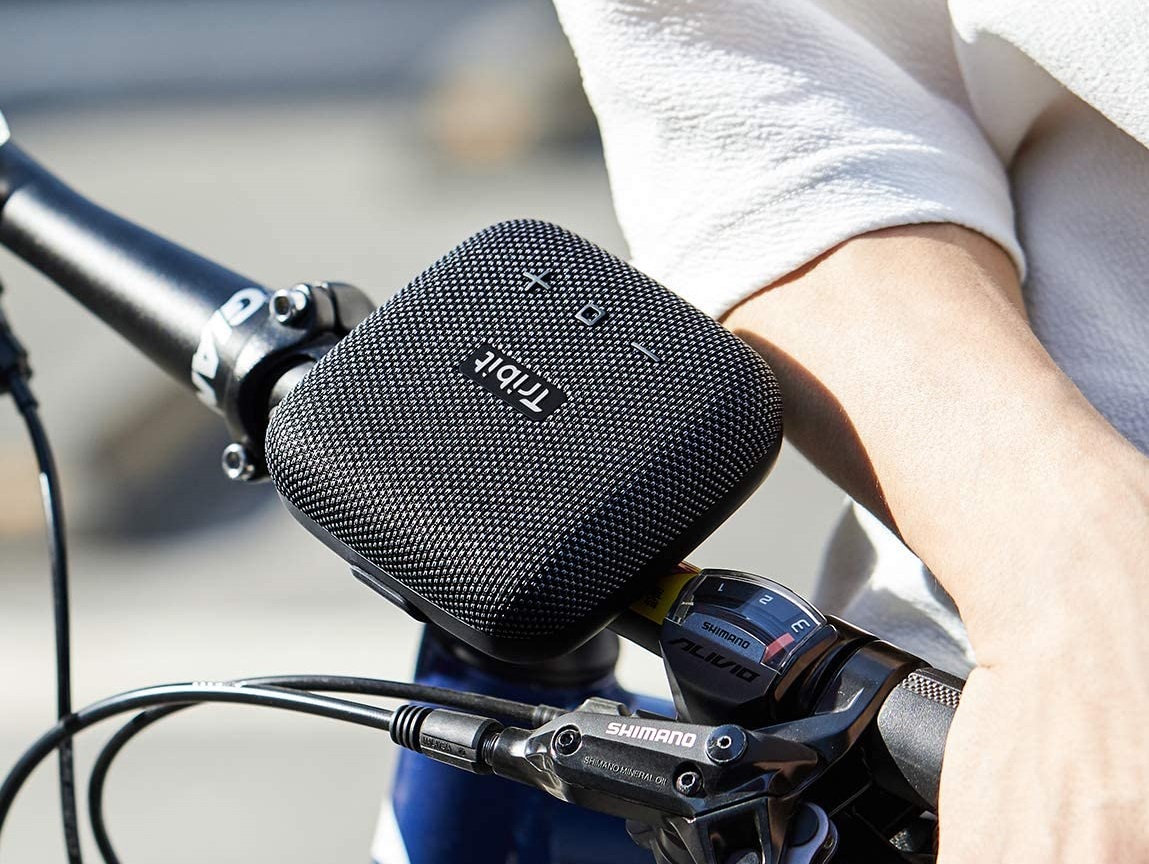 Tribit is a name you may not have heard before, but I’ve been testing the company’s StormBox Micro for a couple of weeks, and like what I’ve heard.

The speaker supports Bluetooth 5.0, the second latest version of the wireless standard that’s more energy-efficient. Tribit says the speaker gets eight hours of playback per charge, and that’s been my experience. That lower battery life is due to its relative small size: the speaker is a roughly 3.7-inch square that’s about 1.5 inches deep and weighs just over half a pound. It’s by far the smallest speaker in our guide, and very easy to carry around.

Despite its size, the StormBox Micro delivers where it counts. It’s earned an IP67 rating, which means it’s dust-proof and can be held under 3.3 feet of water for up to 30 minutes. More importantly, it sounds very good.

Tribit touts the speaker’s bass, and they’re not wrong. The bass is surprisingly loud without overpowering the midrange and treble very much. I will say that the speaker won’t produce sound that’s as clear as higher-end speakers (it’s not for audiophiles), but it is great for casually listening. I was especially impressed at how easy it was to pair two StormBox Micros together. Once connected, you can use the speakers as a stereo pair, or as two mono speakers playing the same song simultaneously.

Finally, the StormBox Micro has a strap you can use to attach it to a bike (as seen in the picture above), or around a shower head for bathroom listening. If you’re looking for a good sounding ultra portable speaker, this is our recommendation. 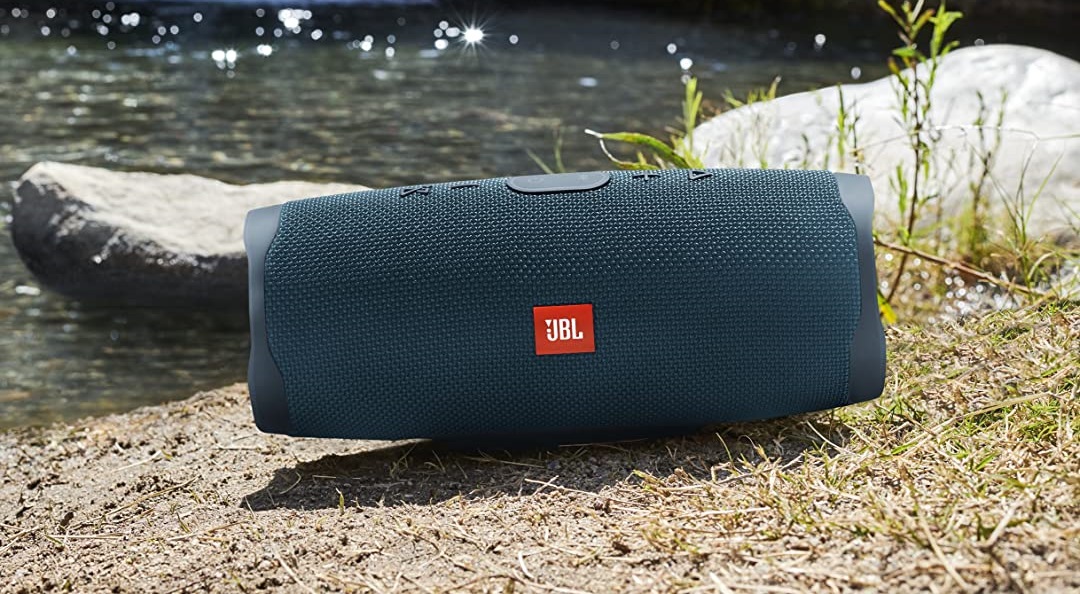 JBL’s Charge 4 is the latest entry in the company’s much loved mid-sized Bluetooth speaker series.

Like its predecessor, the Charge 4 supports Bluetooth 4.2, which is a fairly recent version of the wireless standard. JBL says it gets 20 hours of battery life per charge. The Charge 4 is tube-shaped, and measure 8.5 inches long, and roughly 3.5 wide and deep. This speaker has earned an IPX7 durability rating, which means it’s totally dust-proof and can be be totally submerged under up to 3.3 feet of water for up to 30 minutes.

I tried the previous version of this speaker and found the audio quality to be better than average, especially at high volumes. If you don’t like the way it sounds out of the box, you can adjust its EQ (equalization) settings inside the JBL Connect+ app. That same app allows you to pair up 100 JBL speakers together to create a massive wireless sound system. Another great feature carried over from the previous generation Charge speaker is the ability to pair two devices to the speaker at the same time. This allows multiple people to share DJ duties instead of one.

If durability and connectivity are your chief concerns, JBL’s Charge 4 is the best option in our guide. 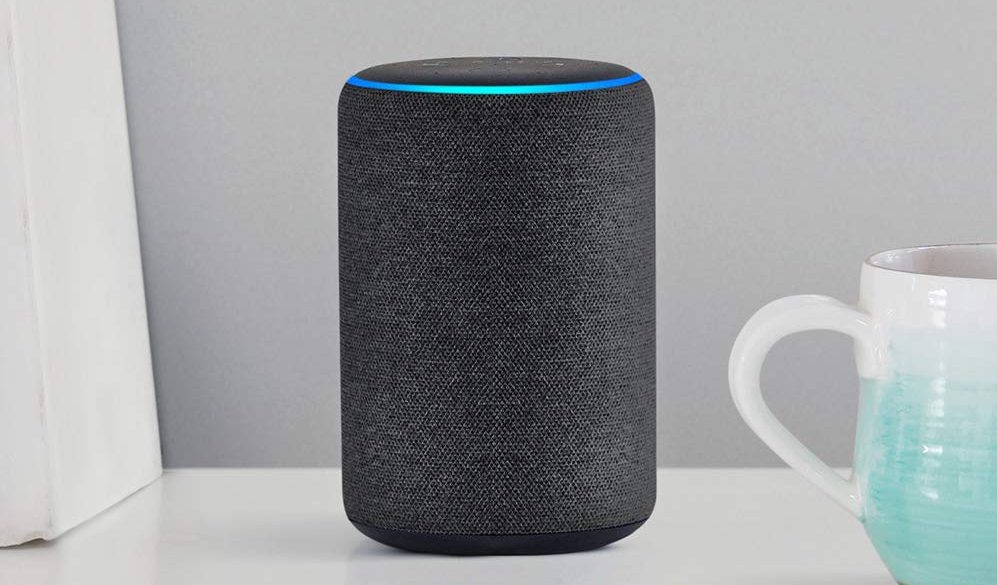 One of the main criticisms people had with Amazon’s original Echo was the quality of its speakers. Amazon listened, and the Echo Plus (2nd Generation) is proof. This is the only Bluetooth speaker in our guide that needs to be plugged in all the time, but this comes with some big advantages.

The main reason to get this Bluetooth speaker is that it has Amazon’s Alexa smart assistant built inside, which allows you to control it using your voice. You can ask the Echo Plus (2nd Generation) to play music from popular services like Spotify or Amazon’s own Prime Music, ask it questions about the news or weather, and control smart-home devices. The reason we’re recommending this Echo speaker over any other is that it has a Zigbee antenna inside, which allows it to connect directly with smart home devices that typically require a proprietary hub.

Amazon is very up front about the audio hardware inside the Echo Plus (2nd Generation), which is refreshing. It has a  three-inch woofer to handle the bass and treble, and a 0.8-inch tweeter for treble. Having multiple drivers (the part of a speaker that creates sound) typically results in better balance, and ultimately better sounding music. You can pair two Echo Pluses together to create a stereo pair, for even better performance.

You won’t find a smarter Bluetooth speaker than Amazon’s Echo Plus (2nd Generation), and if you don’t mind keeping it plugged in all the time, it’s an excellent choice. 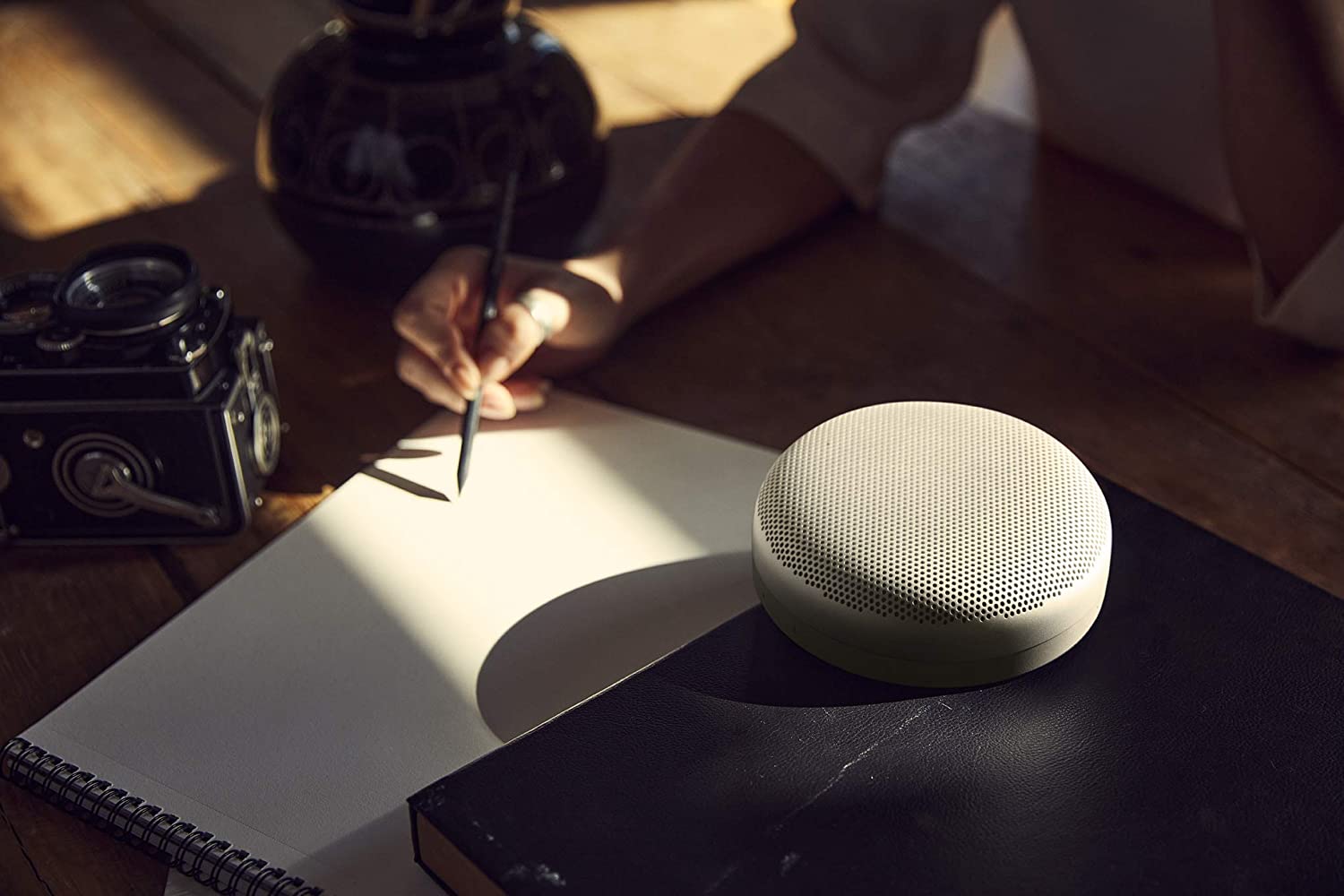 Bang & Olufsen has a rich tradition of creating some of the best-looking and sounding speakers available anywhere, and the latest version of its A1 speaker carries on that legacy.

The speaker supports Bluetooth 5.1, a just-ratified version of the wireless standard, and gets up to 18 hours of battery life per charge. The speaker is disc-shaped, measures 5.2 inches across, and 1.8 inches high, and weighs 1.23 pounds. It’s earned an IP67 rating, which means it’s totally dust-proof, and can be submerged in up to 3.3 feet of water for up to 30 minutes.

The A1 (2nd Gen) is a 360-degree speaker, which means it uses its round domed shape to disperse sound in multiple directions. There’s no “sweet spot” you have to be in to hear music clearly.

Despite its small size, this speaker has a 3.5-inch woofer and 0.6-inch tweeter to create more well balanced sound. Bang and Olufsen says this speaker is “ideal for small social gatherings and mid-sized rooms around the home.” It may not shake the rafters, but this speaker is designed to be taken everywhere. Two A1 speakers can be connected to create a stereo pair.

Audio quality is the most important prerequisite for recommending a speaker, but the A1 2nd Gen can do a lot more than play music. It supports Amazon’s Alexa, and when configured properly, it can be controlled entirely using your voice. This includes adjusting its volume, playing music from streaming services like Spotify and Prime music, and controlling smart-home accessories.

No speaker is perfect but Bang & Olufsen’s A1 (2nd Gen) is a really well-rounded pick if you want to take a smart, small, great-sounding, and beautifully-designed Bluetooth speaker everywhere you go. 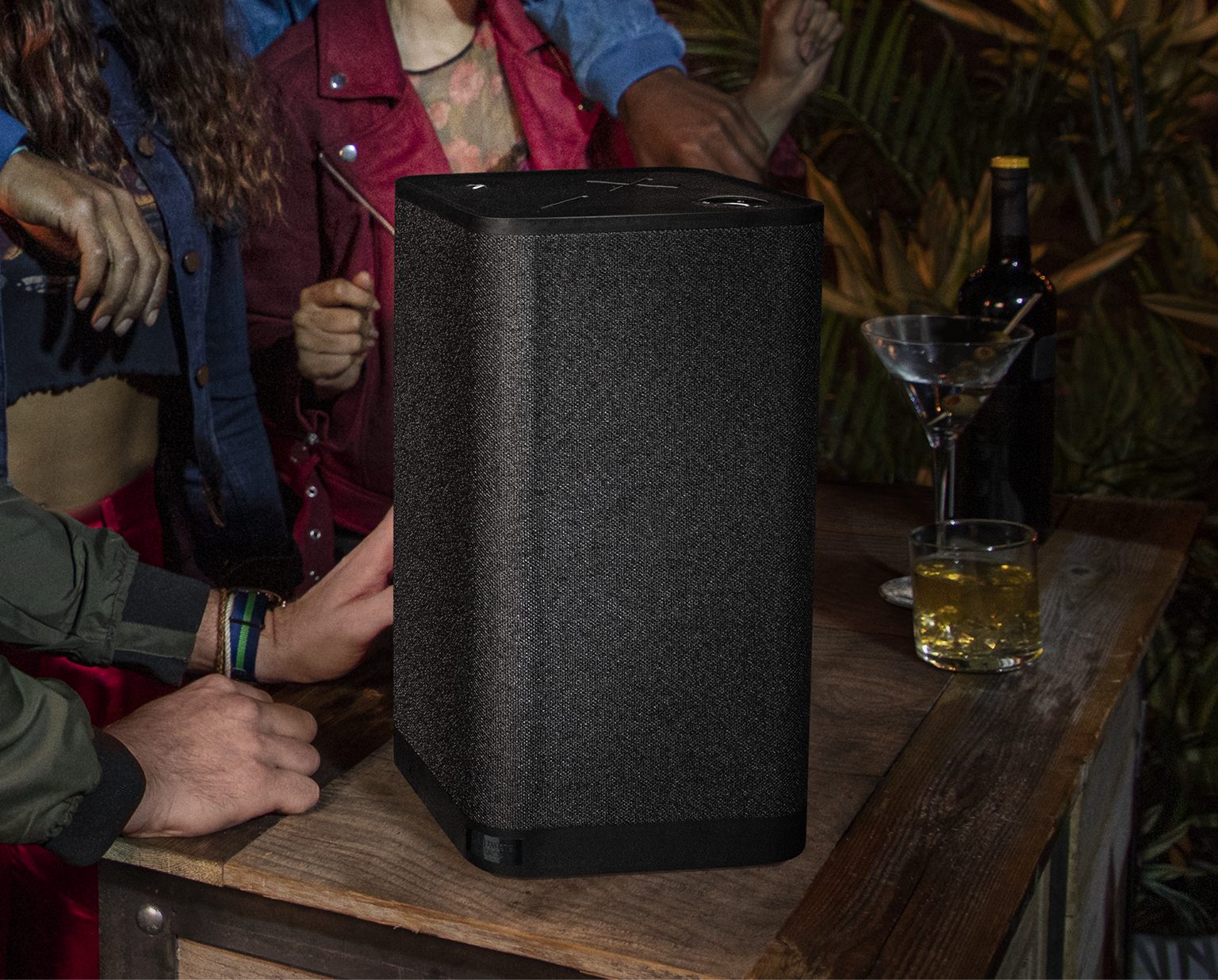 The top-of-the-line Bluetooth speaker in our guide is Ultimate Ears’ HYPERBOOM, a massive wireless speaker with a lot of punch.

It supports Bluetooth 5.0, the second latest version of the wireless standard that’s more energy-efficient, and gets up to 24 hours of battery life per charge. That’s the best battery life of any Bluetooth speaker we recommend, but it comes at a cost: size. The HYPERBOOM is 14.4 inches tall, 7.5 inches wide and deep, and weighs 16.6 pounds.

Yes, this is a portable speaker, but not one you’re likely to grab on your way out the door. That’s especially true considering its IPX4 durability rating, which means it’s dust-resistant to avoid damage from particles larger than 1mm (millimeter), and water-resistant enough to handle getting splashed. Think of it this way: sand can get inside, but crumbs wont; it’ll work if you spill a drink on it, but not if it gets caught in the rain.

On the audio front, the HYPERBOOM is well-equipped. It has multiple woofers, tweeters, and passive radiators, which should result in really well-balanced sound. To that end, the speaker supports a custom technology Ultimate Ears calls “adaptive EQ,” which means the speaker will actively optimize the way it sounds based on where it’s placed. If you take the speaker indoors and outdoors, you should notice a difference. If you don’t like the way adaptive EQ works, you can always adjust the levels manually.

If you regularly throw large parties, and want a speaker that uses AI to sound its best at all times, I highly recommend Ultimate Ears’ HYPERBOOM.