“An audio interface, in the simplest terms, is the piece of gear you need to get sound in and out of a computer,” explains Grammy-winning producer, Dave Darling, who’s worked with everyone from Brian Setzer to Mötley Crüe. “An audio interface takes the source sound – microphone, guitar, synth, etc. — and converts it into a language that your computer can understand and record,” he explains. “Ever try plugging your guitar into a computer? You can’t!”

Whether you’re creating a guitar riff or writing a full song, an audio interface lets you connect a variety of instruments, voices and signals to your computer, and then listen back to what you’ve recorded through a set of speakers or headphones. Built-in mic preamplifiers (or “preamps”) take your audio signal and raise or “amplify” it to a loud enough level for processing. Preamps can also act as a filter for your audio to pass through, churning out richer, warmer tones on the other end.

After your audio is converted into a digital file, you can then using any number of production tools to start mixing and creating your track. The audio interface will then take the digital information recorded in the computer and turn it back into the music you hear coming out of your speakers. In short, “Modern computer recording would be impossible without an audio interface,” Darling says.

Even if you’re not a pro, audio interfaces are easy enough for amateur musicians to pick up and create with as well. Many of them are super portable too, slipping easily into a bag for writing and recording on the go.

Darling says he uses a small interface in his writing studio, and more high-end setups in the larger studios where he’s actually making records. While the units he uses run into the tens of thousands of dollars, Darling says there are still some good two-channel interfaces at more affordable price points.

“In my opinion, you should get the best quality interface you can afford,” he says. “Even if you’re only a hobbyist, you want your stuff to sound good.”

As for how you know when you’ve got a hit song, Darling says it has 50% to do with the songwriting and 50% to do with the recording. “You hope the song will be a hit, and you might think you got it, but ultimately, you won’t know until people hear it and give you their reactions,” he says. “That said, when you can get an insanely good vocal on a song you know you’re in the running.”

We’ve found some solid audio interfaces that deliver clear, focused sound with no frills or fuss. Whether you’re locking in an instrumental piece or recording vocals, these sets promise to make the recording process easy and efficient, so you can get on with producing your next big hit.

What Are The Best Audio Interfaces?

There are many factors to consider when choosing the best audio interface for you; below are the most important ones, which we considered while we were researching this list.

Inputs: An audio interface’s inputs (known more commonly as ports) are what allow you to connect an instrument or microphone to the device for recording. The audio interfaces in this guide have one or two inputs, which means they’re best suited for a solo musician recording an instrument and vocals. If you need more inputs, you can upgrade to a larger version of the same interface.

Maximum Resolution: All of the audio interfaces in our guide can record music at up to 96kHz, which is better than CD-quality sound. Many of them can create 192kHz recordings, which contain even more detail and fidelity.

Size: We made sure the interfaces in this guide were small enough to use in a bedroom studio, or could be easily taken to record a live gig.

After hands-on testing we’ve determined that Focusrite’s Scarlett 2i2 (3rd Gen) is the best audio interface for most people.

The interface has two inputs, which can be used for either instruments or microphones. Each input has its own gain (volume) knob, an instrument button, and an AIR button, which optimizes performance for vocals or acoustic instruments.

In practice the Scarlett 2i2 (3rd Gen) produced excellent sounding recordings. I used it to play guitar using Apple’s GarageBand app on a Mac and never heard an audio glitch. The interface can record audio 24-bit audio at up to 192kHz resolution. That’s far better than CD-quality sound.

Focusrite’s interface is also incredibly easy to use. My computer recognized it the moment I plugged it in, and never disconnected while I was playing. The interface’s physical controls made it a lot easier to make minor adjustments than trying to manipulate digital dials.

The Scarlett 2i2 (3rd Gen) is BUS powered, which means its USB-C port is used for both data and power. You don’t need to connect it to a separate outlet, just plug it into your computer, and start recording. Removing the restriction of a separate power cord makes the Scarlett 2i2 (3rd Gen) a lot more portable. If you regularly record music on a laptop, this feature is a game changer.

Focurite’s Scarlett 2i2 has the ideal blend of power, portability, and ease of use, which is why we recommend it to anyone who wants to get serious about recording music at home.

PreSonus’ AudioBox is a great audio interface for beginners making their first recordings.

It has a pair of multi-use inputs, and each one has an individual gain knob for easy volume management. The AudioBox’s mixer knob lets you adjust the volume balance between the instrument you’re playing and audio coming from your computer.

This makes overdubbing (playing a new part over a previously recorded track) a lot easier. The mixer knob is only useful if you plug headphones into the AudioBox’s headphone jack, located on the back. The interface is bus powered, so a single USB-B to USB-A cable will supply power and transfer data.

The AudioBox compares nicely to the other audio interfaces in this guide, but it can only record 24-bit music at 96kHz. This is still better than CD-quality sound, but it’s not quite as good as a 192kHz recording. If this doesn’t bother you, PreSonus’ AudioBox is the right pick. 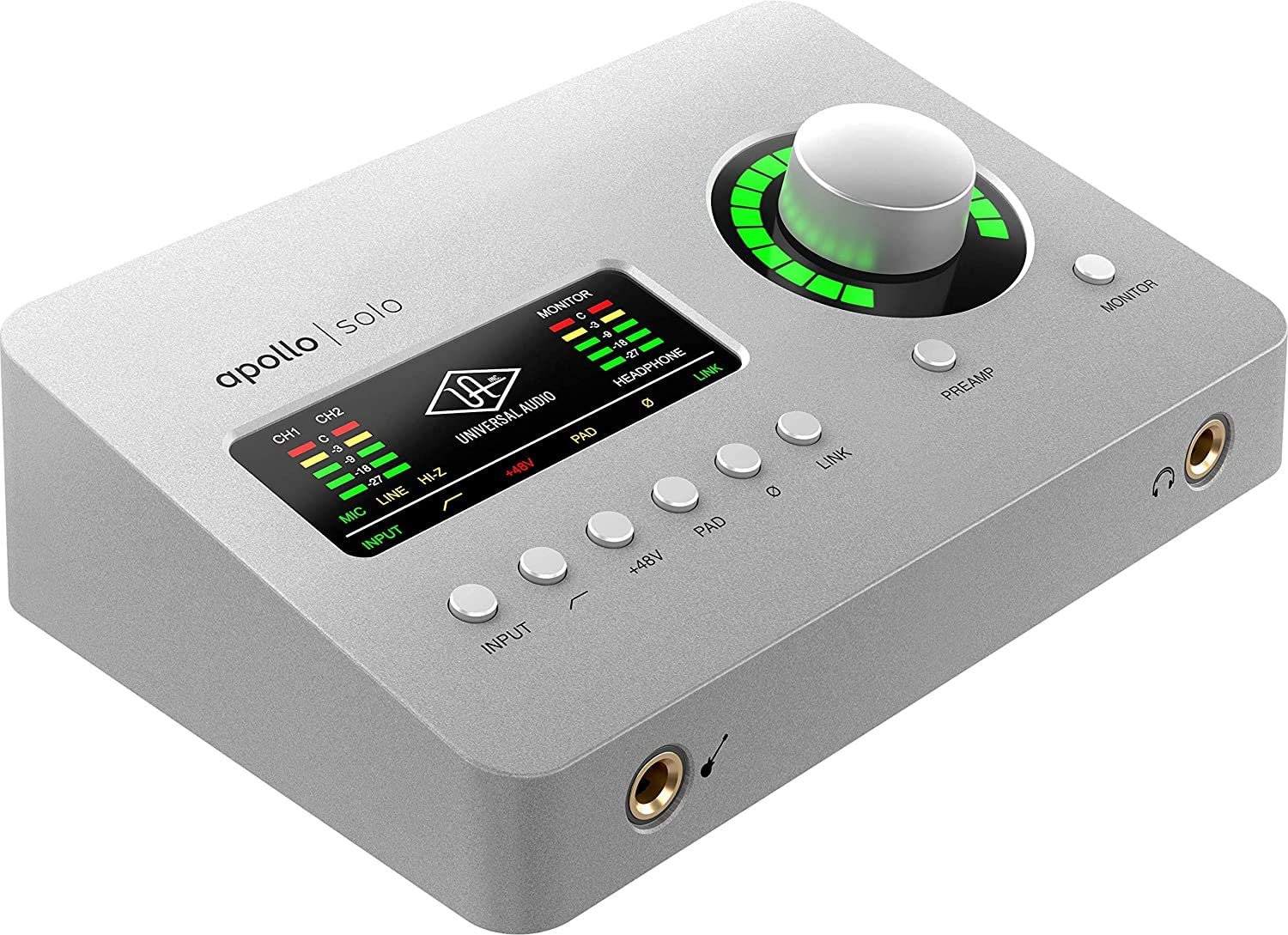 Universal Audio makes some of the best digital recording equipment in the world, and its Apollo Solo is designed for serious musicians.

It has a single instrument input and headphone jack on the front, and a pair of multi-use Line inputs on the back, which you can use for a microphone. You can switch between inputs, adjust your recording volume, and apply audio effects by pushing buttons on the front of the interface.

The main reason we’re recommending the Apollo Solo is the set of high-end components inside. It can convert analog sound into digital recordings with virtually no latency (lag). If you use LUNA (Universal Audio’s recording software), you can apply dozens of plug-ins to make your instrument sound like it’s being recorded through some of the most iconic equipment in the world.

I’ve used a Universal Audio interface before, and it’s very fun to use once you get the hang of how to use it. The 24-bit 192kHz recordings you can make with the Apollo Solo will be studio quality, and you’ll be rewarded with the best possible sound if you spend time learning the ins and outs of Universal Audio’s software.

The Apollo Solo comes in two variants: Thunderbolt 3, which can only be used with Macs and USB, which can be used with any computer. Both versions are BUS powered, so you don’t need to think about plugging it into an outlet to record. If you’re looking to upgrade from a more entry level audio interface to one that’s packed with power and potential, Universal Audio’s Apollo Solo is the best choice.