Acoustic guitars naturally produce their own amplification via the strings’ vibrations, resonating throughout the body and flowing out the sound hole. So why get a separate amp to go along with it?

While amps may be mostly associated with electric guitars, having one for an acoustic can be a big boost — the most obvious benefit being greater projection of your guitar’s natural sound. On its own, an acoustic guitar may sound perfect, but it’s not going to be loud enough for things like playing on the street, in a noisy club or bar, or with a full band.

Here, a few things to consider before going all-in on your new acoustic amp, from amp effects to portability.

Portability: This is a major factor, especially if you’ll be playing gigs all over your city. Overall, most acoustic amps aren’t as bulky as electric ones, making it easier to take along in a crowded car, ride-share or the subway. But lugging a heavy amp every day can put unnecessary stress on your back, shoulders, and playing arm/hand. Be sure to check the weight of an amp, along with things like built-in strong handles, before buying.

Power: For home or practice spots where you know there’s going to be an available power outlet, this won’t be worth worrying about. But if you’ll be playing at places where there’s likely to be no power source at all, an amp with a battery backup can be a lifesaver. Built-in lithium batteries are rechargeable, and are likely to last a while when playing at moderate volume, but amps that take AA batteries are an option too.

Effects: Things like reverb really bring out a guitar’s natural shimmering sound, filling in the negative space between notes and producing a wide, dreamy result that pairs especially well with vocals. Same goes for chorus and echo, bringing a big, sweeping punch right where you want it. A foot pedal, included with some models, can also kick your performance into high gear mid-song, switching on features with one quick toe-tap.

Channels: Having an extra channel on the amp is a must for solo performers. This allows you to plug in a mic for vocals, or a phone to play along with a backing track. Most modern acoustic amps also have the option for Bluetooth connectivity as well.

Using an amp also means you won’t necessarily need to have a mic right up against the sound chamber to capture your playing, which lets you move around freely instead of being frozen in one place. Moving around while recording with a mic can affect the performance, not to mention they can also get knocked down mid-song and give off screeching feedback if positioned wrong.

What Are the Best Acoustic Guitar Amps?

We’ve selected our four favorites for amplifying an acoustic’s best sound, whether you’re composing or showcasing your latest songs. 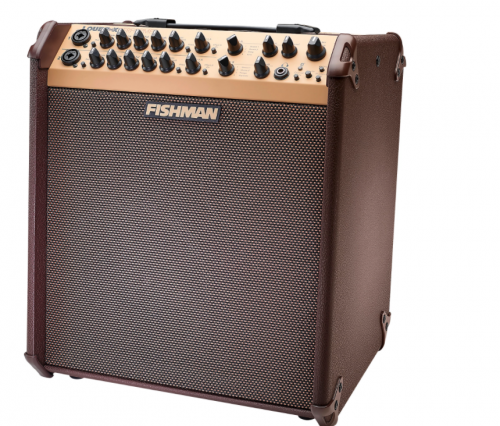 Fishman’s series of amps are beloved by acoustic guitarists. At 180 watts, this is Fishman’s most powerful model, producing clear bi-amplified sound, and lets you be heard even with a full band onstage. There are two input channels that take both 1/4-inch and XLR inputs, and 24V power for your condenser mic too.

Effects like reverb and delay are easily adjustable, as are flanger and echo, and Bluetooth connectivity is included for playing along with backing tracks. To really help project this amp’s warm sound outwards and upwards, there’s an attached kickstand to tilt it 50 degrees, so the people in the back row can be sure to hear you. 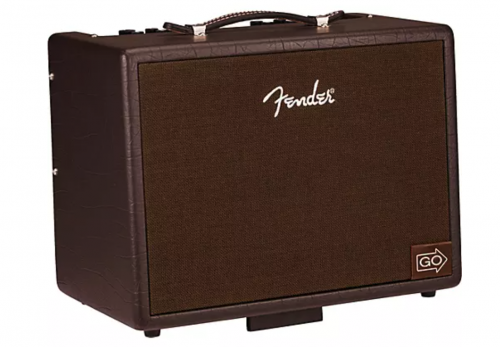 Take this 100-watt combo amp far from a power source and still sound great, with up to 12 hours of rechargeable battery life at mid-range volume.

When testing it out, Fender’s Acoustic Junior GO delivered a beautifully full and rich natural tone. Inside, there’s an 8-inch cloth-surround low-frequency driver and hi-fi compression tweeter to cover the lows, mids and highs of the sound spectrum. Ports are plentiful here too, with dual XLRs, two 1/8-inch jacks (for aux and headphones), a 1/4-inch spot for a foot-switch, USB for recording, and a channel input with phantom power.

This is Bluetooth compatible with your smartphone or tablet for playing along with backing tracks or your favorite songs. The built-in 90-second looper lets you record, play, stop and even erase a take with an undo button — it’s a feature we loved, and is not only fun to practice with, but instantly expands opportunities for songwriting, allowing you to add layers to any composition and build a song from the ground up even when performing live.

When it’s time to travel, the lightweight plywood cabinet cuts down on the unit’s weight, with a tough leather strap on top to carry it and universal voltage to plug it in safely. This bundle has everything you need to get started too, including a 10-foot cable, 24 picks, and an instructional DVD. 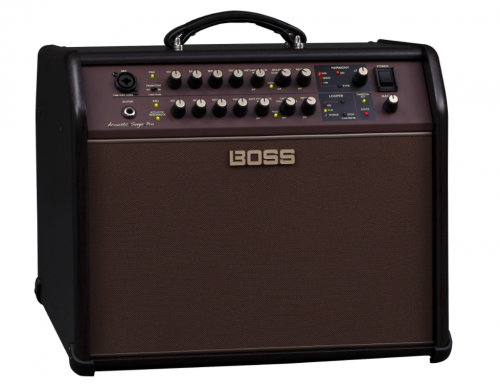 You may know Boss from its extensive line of pedals, but its 120-watt, three-band EQ amp is an excellent option for any acoustic artist. There are two channels for a mic (with phantom power for condenser mics) and guitar, dual XLR jacks, plus a USB output for recording into your favorite DAW application. An 8-inch woofer and 1-inch tweeter inside deliver rich low-end and clear highs, with a resonant reverb effect whenever you want it.

The built-in looper is great for solo live shows, as is the anti-feedback control on each channel. And the harmony function is particularly fun to experiment with, instantly creating vocal harmonies based on the key and chord you’re playing. 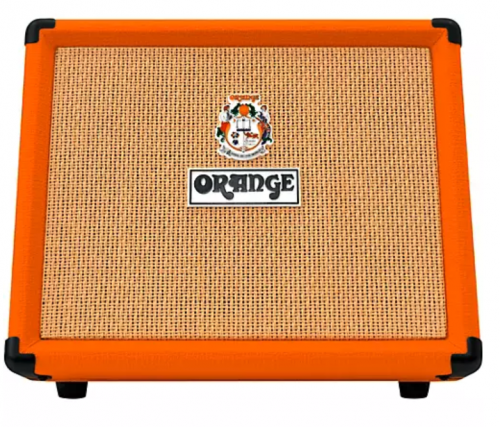 Orange’s amps aren’t just eye-catching (though they definitely check that box too). This mighty little amp is an awesome option that still provides portability and plenty of features. It can run on batteries, though you’ll need 10 AAs instead of lithium. You can still use it to play for eight hours at low volume when you’re away from a main power source.

At 30 watts, it can still get loud, with a sound quality that shines through whether you’re playing clean or with a mix of effects. It’s a worthwhile practice amp that’s powerful enough to perform for a small crowd, with a three-band EQ to set exactly to what you’re envisioning. Reverb and chorus are easy to adjust, and the notch filter cuts down on  feedback and irritating frequencies.