If you’re looking to step up your photo game this year, consider springing for a 360 camera.

A must for both gear-heads and casual enthusiasts alike, a 360 camera lets you capture your view from all angles, using multiple, ultra-wide lenses to take in the world around you.

What You Need to Know Before Buying a 360 Camera

There are many factors to consider when choosing the right 360 camera for you; below are the most important ones, which we considered while we were researching this list.

Resolution: Viewing 360 pictures and video can give you an incredible perspective on a setting or event, but your enjoyment will suffer if the resolution is too low. To save you from blurry, blocky images, the cameras have sensors that can shoot still images at a minimum of 12 megapixels, and video at 1080P. Those were our minimum requirements, but some picks can shoot at much higher fidelity.

Storage: High-resolution video files are huge, which is why we considered how much internal storage these cameras had, and whether you could expand it with a memory card.

Durability: You’re probably going to take this camera with you on trips, which means you’ll be close to water. The cameras in this guide are durable enough to survive a splash or sudden rain storm, but you’ll generally want to avoid dropping them into a pool (If you’d like to take underwater video, we have a guide to the best GoPro cameras).

The Best Face Masks For Running and Cycling

The 100 Greatest Debut Singles of All Time

Weight: You’re going to be carrying these cameras everywhere you go, and holding them while you shoot, so we factored weight when we were researching this guide. All of the cameras are between 3.6 and eight ounces, so you shouldn’t feel fatigued if you hold them for a while.

Note: These cameras shoot 360 images and video by taking a series simultaneous pictures at several angles. You’ll still need to stitch your photos and videos together to create a full 360 finished product, though most of the models listed here allow you to do that in the camera or through a connected app. 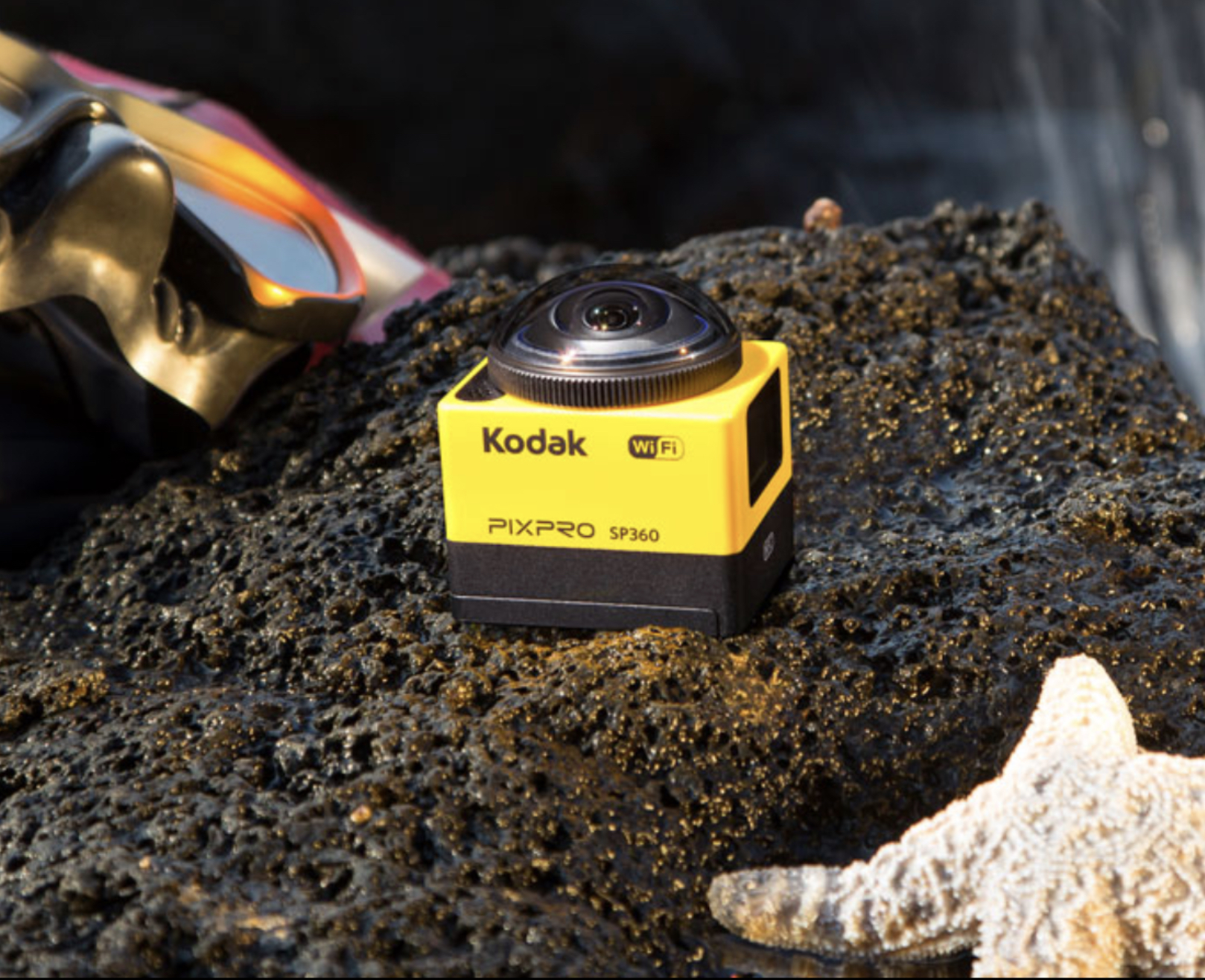 Kodak’s PIXPRO SP360 is a palm-sized 360 cam whose flat bottom makes it easy to capture footage without being held. Instead, you can set it down in an open area, and let it capture a scene, this is ideal for getting shots of nature.

The camera has a maximum resolution of 12 megapixels for photos and 1080P for video. It doesn’t have any internal storage, but you can insert a 32gb MicroSD card, which which should hold a couple of hours of footage, or hundreds of photos.

Kodak says the SP360 can withstand the impact from a 6.6 feet fall, and has an IPX5 waterproof rating (more than enough to handle splashes or a rainstorm), and IPX6 dust-proof rating (complete protection against dust). Bottom line: you don’t need to worry if it falls in sand, or gets a little wet. At .26 pounds, the SP360 is one of the lighter options in our guide, which is great if you plan on taking it with you everywhere you go.

There are two ways to take photos and videos on the SP360. You can manually push the record button on the side of the camera (there are also buttons to switch between still images and video), or connect to the camera to your phone over WiFi. Kodak has an iOS and Android app that lets you control the camera from up to 30 feet away.

Once you’ve taken pictures or video, you can edit them together to create a full 360 image with Kodak’s free PIXPRO editing program, which is available for Mac and PC. The app has a simple interface, and take you through the entire editing workflow, from picking an aspect ratio, to sharing the clip with your friends. 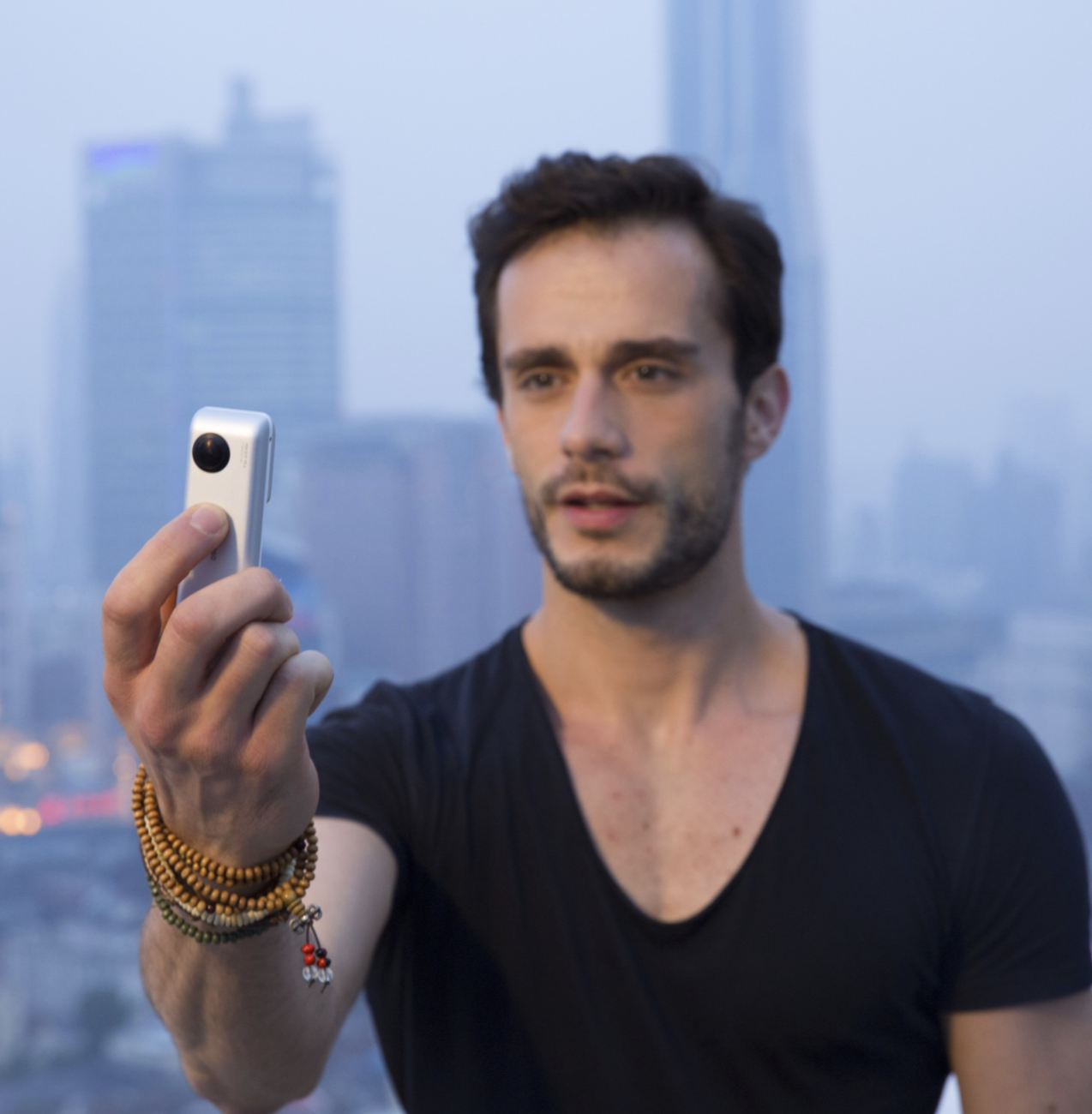 Insta360’s Nano S is a 360 camera that works independently, but was designed to be used with the iPhone (iPhone 6S and up). The camera slides on top of your iPhone, and plugs into into its Lightning port to enable some of its best features.

The Nano S has a pair of lenses that can take 20 megapixel photos and 4K video at 30 frames per second. Video is stitched on the device, so you don’t have to edit it together after recording, which is a nice touch. This camera supports a technology called image stabilization, which compensates for small movements (shaky hands if you’re laughing, for example), so your videos look smooth. It does this as it’s recording, which saves you even more editing time.

The camera doesn’t have any internal storage, so you’ll need to pick up a MicroSD card, which is a minor inconvenience. Insta360 doesn’t provide an IP information for the Nano S, which means it’s probably not very water resistant. While this camera can be used on its own — its ergonomic shape and 0.15 pound weight make it easy to hold — it’s designed to be used with your iPhone.

Once connected, the the Insta360 Nano S app will launch (you’ll need to download it from the iOS App Store first), and your iPhone’s screen will turn into the camera’s viewfinder. You’ll be able to start and stop video recordings and snap pictures with the tap of a virtual button. The Nano S cannot take pictures without being connected to the iPhone, so keep that in mind if you’re into photography.

A feature called Multiview enables you to see what’s being recorded by both camera lenses, so you can set up particular shots (think interviews or reaction videos) with the right framing. You can use another feature called SmartTrack to focus the Nano S on an object or person, which it’ll keep focusing on as you move the camera. Finally, you can use the iPhone and Insta360 Nano S to livestream HD 360-degree video on Facebook live, YouTube, and Twitter.

These are great features, but they’re only available to iPhone users. You can use this camera independently, but you won’t have access to its coolest features. 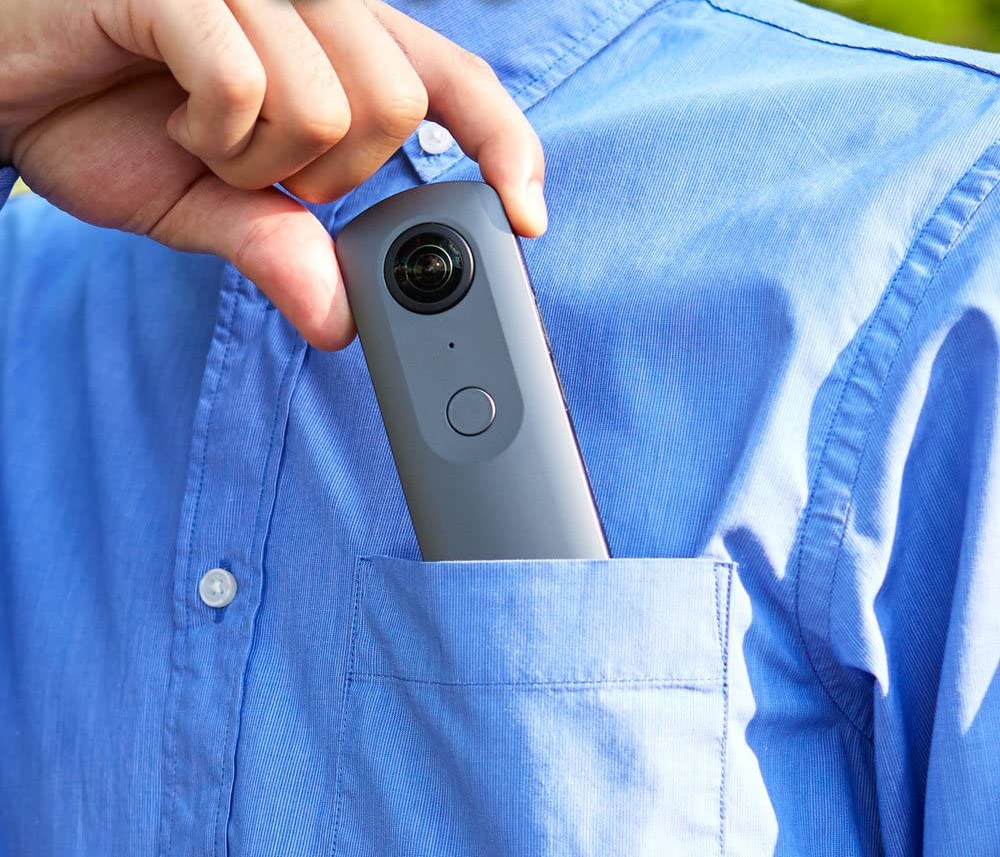 Ricoh is the parent company of renowned camera brand, Pentax, so they know a thing or two about producing high quality images.

The Theta V is the company’s high-end prosumer 360 degree camera, and its specs are pretty impressive. It can record 4K video at 30 frames per second, and still images at 14.6 megapixels. It has a Qualcomm Snapdragon processor (the same type used in almost every Android phone), which allows it to manage white balance and exposure settings in real time. The result is photos and videos that look more realistic without any editing. It even has a built-in gyroscope, which it uses to

Ricoh says the Theta V has a generous 19gb (gigabytes) of internal storage — enough to hold roughly 4800 pictures, and 40 minutes of HD video. There’s no way to add more storage, though, so you’ll have to manage your digital space wisely. To compensate for this, the Theta V can transfer photos and videos to your phone (iPhone or Android) wirelessly. You can also transfer media to a computer (PC or Mac) by connecting the Theta V via the included MicroUSB cable.

The Theta V weighs 0.27 pounds, which is pretty light, but you may want to pair it with some optional accessories, which will improve its capabilities but make it heavier. Its waterproof case allows you to take the camera under 98 feet under water (the Theta V isn’t water resistant on its own). Its optional 3D microphone allows you to record spatial audio, the equivalent of 360 video.

If you’re interested in a 360 camera that will work right out of the box and has impressive technical features, the Theta V is definitely worth considering. 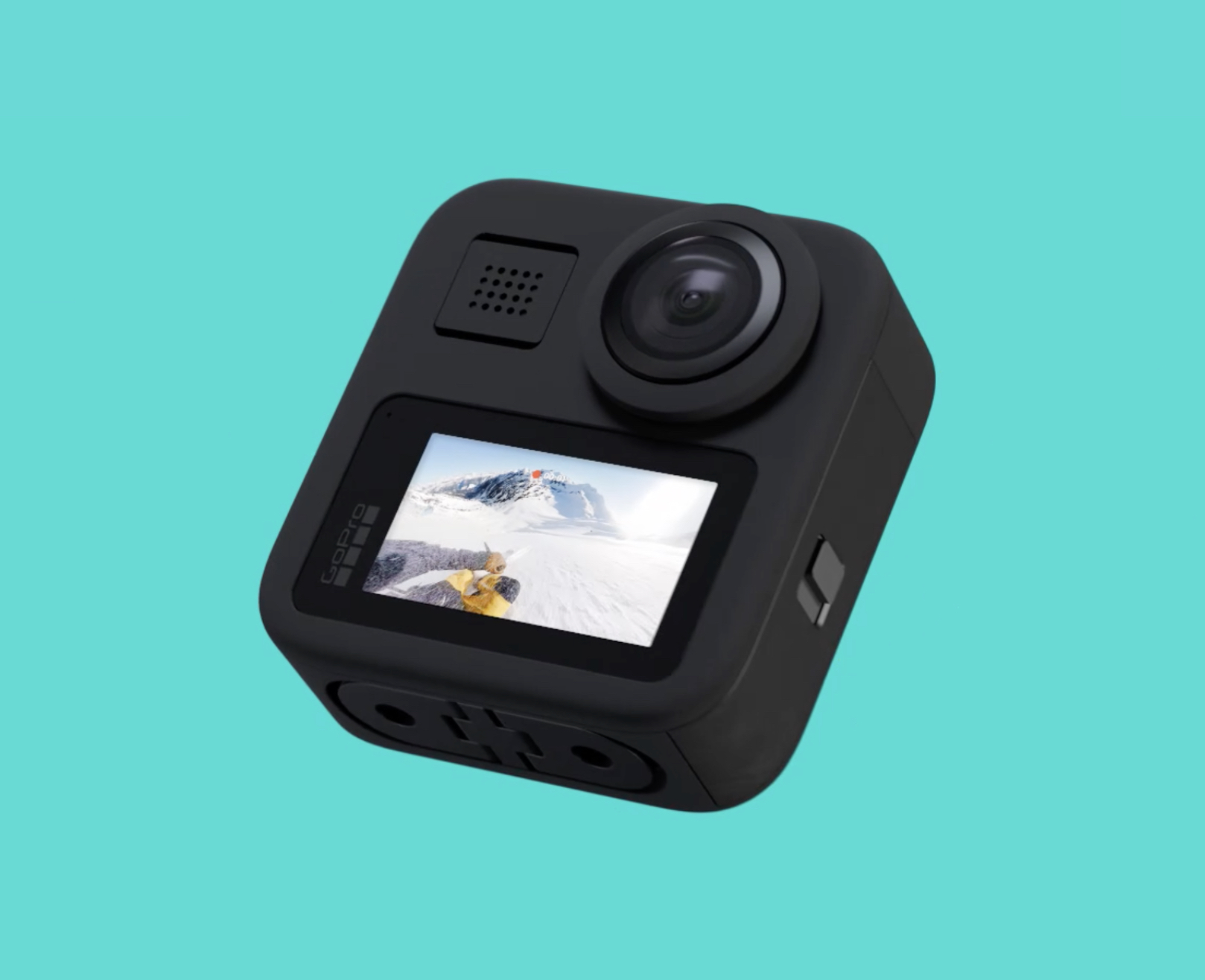 GoPro has made a name for itself by making some of the highest-rated action cameras available today, but its high end MAX records 360 videos.

On paper the GoPro MAX is the most technically-advanced camera in our guide. It can take 16.6 megapixel photos, and 5.6K video at 30 frames per second. It’s hard to find any prosumer cameras that take higher-than-4K footage, much less a 360 degree action cam. Two GoPro video technologies also help the MAX stand out: Max HyperSmooth, a highly sophisticated type of image stabilization to compensate for very jerky motions (think biking on a bumpy road), and Max TimeWarp, which allows you to take ultra smooth time lapse footage.

The GoPro MAX has a small screen, so you can monitor your video in real time, and frame shots before you take them. Its six microphones capture 360 degree sound (GoPro calls this “spherical audio”) without an optional accessory. You can control the camera by pressing buttons on its body or using voice commands, which can be used for common actions like starting and stopping a recording. Voice commands are especially useful if you want to start or stop a recording while you’re in the middle of an intense activity, like rock climbing or surfing.

To get video off the GoPro MAX, you can wirelessly transfer it to a mobile device (iOS or Android), or plug it into a computer (PC or Mac) via the included USB-C cable. The GoPro Max is a well-rounded 360-degree camera, and the only technical downside is that it has no internal storage, so you’ll need to get a MicroSD card.

GoPro doesn’t give the MAX an official IP rating, but the company says it can be used under 16 feet of water without a case, which makes it the most durable option in our guide. It’s also the heaviest, weighing in at 0.36 pounds. It’s not a lot heavier than the other 360 cameras we recommend, but you may notice a difference if you keep it on a selfie stick.

The GoPro MAX’s final standout feature is the ability to livestream to Facebook Live or YouTube directly from the camera. No app is required, but you will need to be connected to a WiFi network for this to work. Video quality is capped to 720P, but that’s a minor inconvenience. Travel vloggers, journalists, and families looking to share important milestones (graduations, weddings, birthdays) in real time may find this feature indispensable.

If you’re looking for a deluxe 360 camera, and don’t mind having to get a MicroSD card for storage, the GoPro MAX is the best choice.