Reading these observations about Spotify, which went public on the NYSE in 2018, might conjure visions of millions of amateur investors gritting their teeth as their bet on audio streaming’s biggest company shows signs of paying off … and then not paying off … and then paying off again. But the truth is, according to a flurry of new SEC filings I’ve scoured in the past month, at the close of 2019, more than a third of the streaming firm was actually owned by institutional investors such as Morgan Stanley — with each of these commercial giants holding stakes of more than five percent each.

In total, at the close of last year, SEC documents show that exactly 65 percent of Spotify was owned by just six parties: the firm’s co-founders, Daniel Ek and Martin Lorentzon (30.6 percent of ordinary shares between them); Tencent Holdings Ltd. (9.1 percent); and a run of three asset-management specialists: Baillie Gifford (11.8 percent), Morgan Stanley (7.3 percent), and T.Rowe Price Associates (6.2 percent). These three investment powerhouses owned more than 25 percent of Spotify between them — a fact worth remembering next time there’s an argument about whose interests Spotify is acting in when it makes controversial moves (for example, SPOT’s ongoing legal appeal against a royalty pay rise for songwriters in the United States).

Furthermore, according to MBW estimates, which my sources suggest are still solid, two major record companies — Sony Music Entertainment and Universal Music Group — continue to jointly own between six percent and seven percent of Spotify (Sony around 2.35 percent and Universal around 3.5). With Sony and UMG added into the mix, then, the names mentioned here comfortably own more than 70 percent of Spotify. 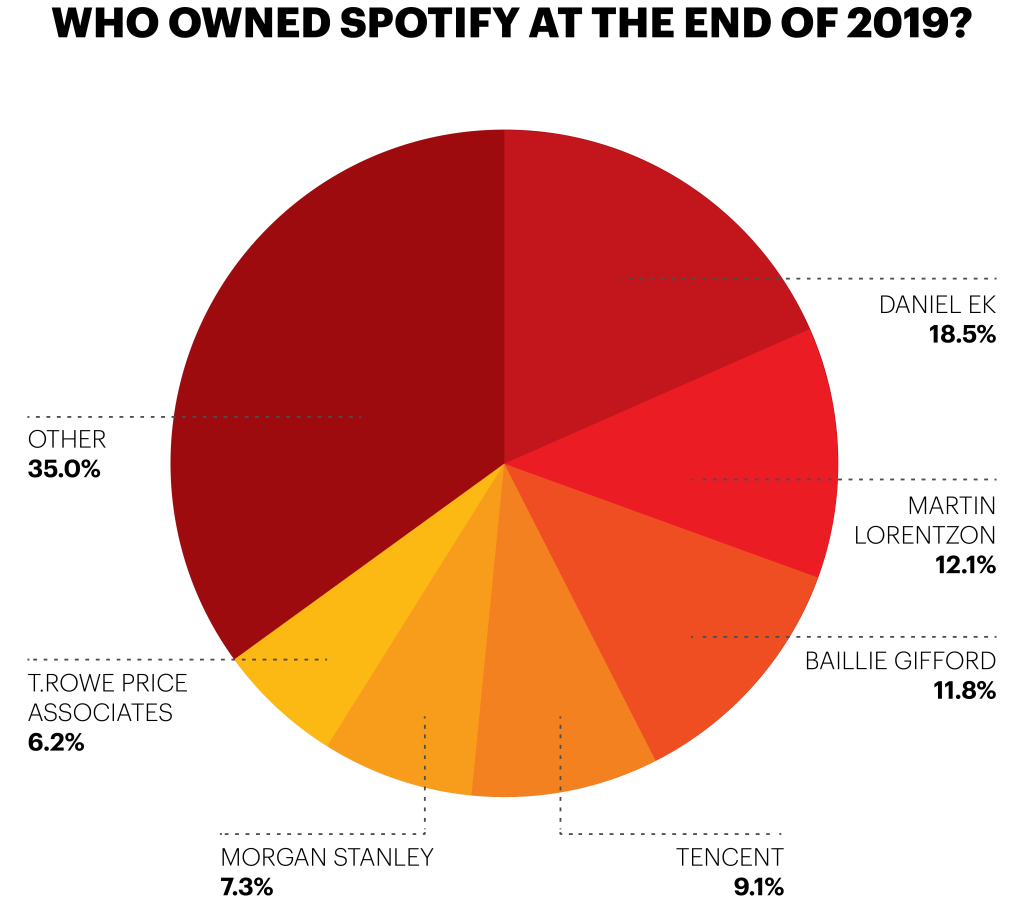 The SEC docs revealing these details (SC-13G filings) are designed to show which parties owned more than five percent of Spotify at the end of 2019 — but they also show the holdings of those who used to own five percent. Therefore, they tell us a lot about those who bought chunks of Spotify in the past calendar year, and those who cashed in their stock.

One key revelation from the filings: Tiger Global Private Investment Partners — an offshoot of U.S. hedge fund manager Tiger Global — dumped 11.5 million Spotify shares in 2019, taking its stake from 6.6 percent down to just 0.1 percent. This stock sale would have banked anywhere between $1.29 billion and $1.81 billion for Tiger.

Coming in relatively late to the five-percent-plus Spotify stock ownership club in 2019 were Morgan Stanley and T. Rowe Price Associates. While we don’t know precisely how much of Spotify these firms owned before their stock tipped the five percent scale, we do know this: Morgan Stanley purchased between 2.3 percent and 7.3 percent of Spotify in 2019, for a sum somewhere between $550 million (for 2.3 percent) and $1.75 billion (for 7.3 percent), based on a median annual Spotify market cap of $23.95 billion.

Morgan Stanley, in January of last year, suggested that Universal Music Group — music’s biggest rightsholder, and therefore Spotify’s biggest supplier — could be worth as much as $42 billion (it’s since been valued at just over $33 billion). Since then, Morgan Stanley has been named as a chief bookrunner of Warner Music Group’s just-announced IPO, while the finance company has also reportedly agreed to loan Tencent Holdings a chunk of $1.1 billion in order for the Chinese company to buy 10 percent of UMG. Elsewhere, Universal owner Vivendi is yet to confirm the names of the eight banks now helping it launch UMG’s own spin-out IPO … but if I were a betting man, I’d suggest Morgan Stanley might be front and center in that little deal, too. Many fingers, many pies.

Speaking of industry incestuousness, I suggest you read more about Tencent’s 9.1 percent stakeholding in Spotify, which is awe-inspiring in its spider’s web of vested interests. The short version: Tencent Holdings is about to own 10 percent of Universal, which in turns owns around 3.5 percent in Spotify, which in turn owns around nine percent in Tencent Music Entertainment, which in turn is part-owned by Universal’s two main rivals (Warner and Sony), but remains majority owned by Tencent Holdings, which in turn owns 9.1 percent of Spotify. (And, yes, no kidding, that’s the short version.) 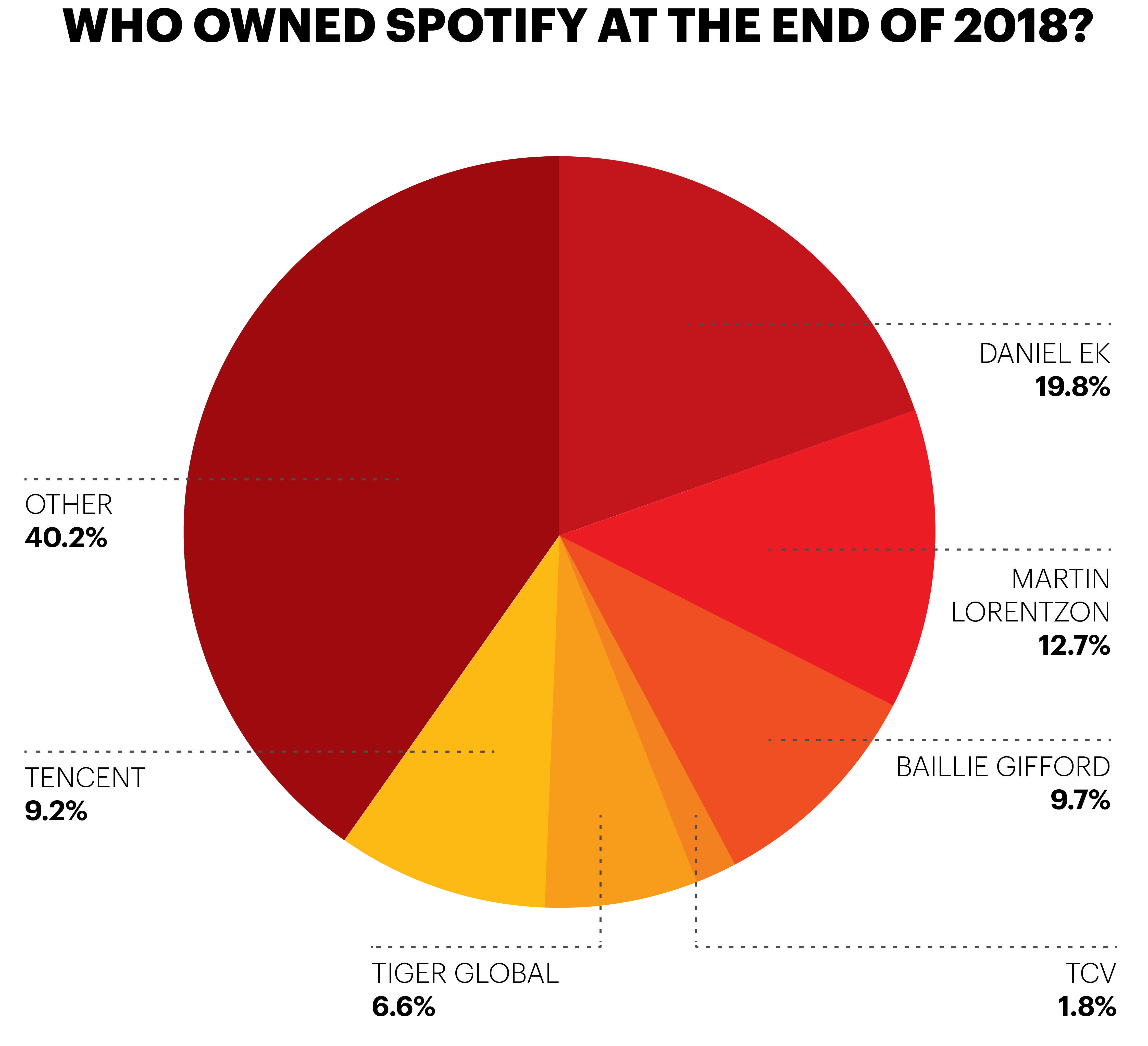 Anything else of intrigue within Spotify’s recent SEC filings? For industry geeks, yes. For one thing, at the end of last year, Daniel Ek didn’t outright own his 34.5 million (18.5 percent) shares in the company he founded. Instead, he shares beneficial ownership of his stakeholding with D.G.E. Investments, which in turn is owned by D.G.E. Holding Ltd., in which Ek is the sole shareholder. Both of these latter companies (the D.G.E. ones) are based in Cyprus.

The most surprising thing about Spotify’s ownership setup as the company drives further into its second decade of existence? Between them, Daniel Ek and Martin Lorentzon maintain 77.4 percent of voting power in the company (with Ek on 33.6 percent, and Lorentzon on 43.8 percent), despite the duo jointly only owning 30.6 percent of ordinary shares. (Ek, via D.G.E. Investments, actually controls the entire voting power of Tencent’s 9.1 percent stake.)

Financial titans like Morgan Stanley and Baillie Gifford might now claim hefty chunks of Spotify, and therefore have significant sway in the future of the business. But it’s actually SPOT’s co-founders who still ultimately call the shots, 12 years on from launching their little green tech startup out of Stockholm.