Are you dead? ? Let’s find out: Watch this video, which went viral on TikTok this week, and see if you don’t chuckle.

For those skeptical types who refrained from clicking the link above: It’s a human, clad in a dinosaur costume, petrifying members of the public. What can I say? It’s an oldie, but a goodie.

What’s it doing here, in a business-focused column about TikTok’s threat to Spotify’s dominance in music? Well, for one thing, I thought it might put you in a cheery mood. Plus, more pertinently, it demonstrates that what you’re about to read should be consumed with the following caveat: not every sensation on TikTok today is about music, despite the fact that most top TikTok influencers — whether via lip-sync or dancing — use music as a vital component of their appeal.

Last week, we learned from mobile activity monitor Sensor Tower that TikTok has now been downloaded more than 1.5 billion times across the world. Considering that, according to estimates, there are only 3.3 billion active smartphone users globally today, this is an impressive milestone — doubly so when you consider that TikTok only took off in 2017, following parent Bytedance’s $800 million acquisition of lip-sync app Musical.ly.

Meanwhile, the Financial Times revealed more details last week about Bytedance’s upcoming on-demand audio streaming service – a.k.a its direct new rival to Spotify (which we reported on in this column last month). According to the FT, this TikTok sister product will arrive as soon as December 2019 in three key emerging markets — India, Brazil, and Indonesia — with a U.S. launch to follow. It will apparently differentiate itself from Spotify, Apple Music, et al., with a focus on “encouraging sharing and virality,” including the use of short video clips.

Publishing Wants To Cash In On BookTok. Creators Say No

'We Got Weights In Fish': How A Regional Fishing Scandal Took Over TikTok

At least one senior Spotify exec has already seen the service, or at least some screenshots of it, and was impressed. Spotify CFO Barry McCarthy remarked that the yet-to-launch Bytedance app has “some really clever social features” while speaking at the RBC Capital Markets Conference in New York on November 22nd.

Here are some key reasons why Spotify may soon be talking about TikTok, and Bytedance’s music app, in rather less jolly terms.

Sensor Tower has provided Rolling Stone with new data regarding both TikTok and Spotify’s popularity to date — although its numbers for Spotify only go as far back as January 1st, 2014. Since that date, estimates Sensor Tower, Spotify has been downloaded globally across iOS and Android some 864.3 million times; in the same period, TikTok has seen 1.52 billion downloads.

It’s important to reiterate that TikTok is not a music app per se. But if, as the FT article hints, Bytedance can build a strong link between its new music offering and its existing social-video empire, TikTok’s global reach and brand strength could cause Spotify real headaches.

That will be particularly true in India — a market where Spotify launched in February, and which has been earmarked as an essential territory for growth by Spotify boss Daniel Ek. According to Sensor Tower stats shared with Rolling Stone, TikTok’s popularity is miles ahead of Spotify’s in India: In the past quarter (Q3, to end of September), TikTok was downloaded 76.2 million times in the market; Spotify’s India-based download count was an eighth of this size, at 9.3 million. 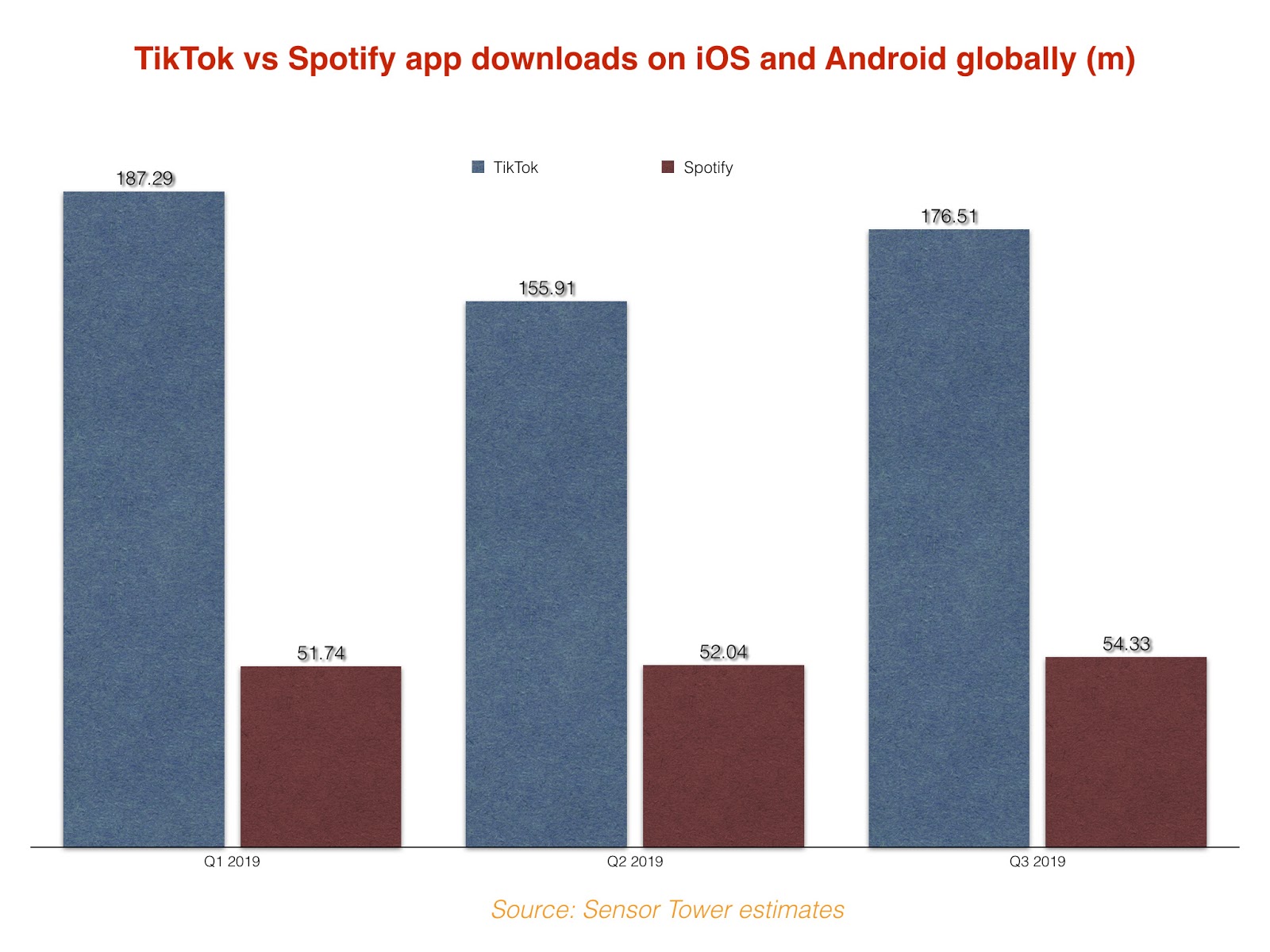 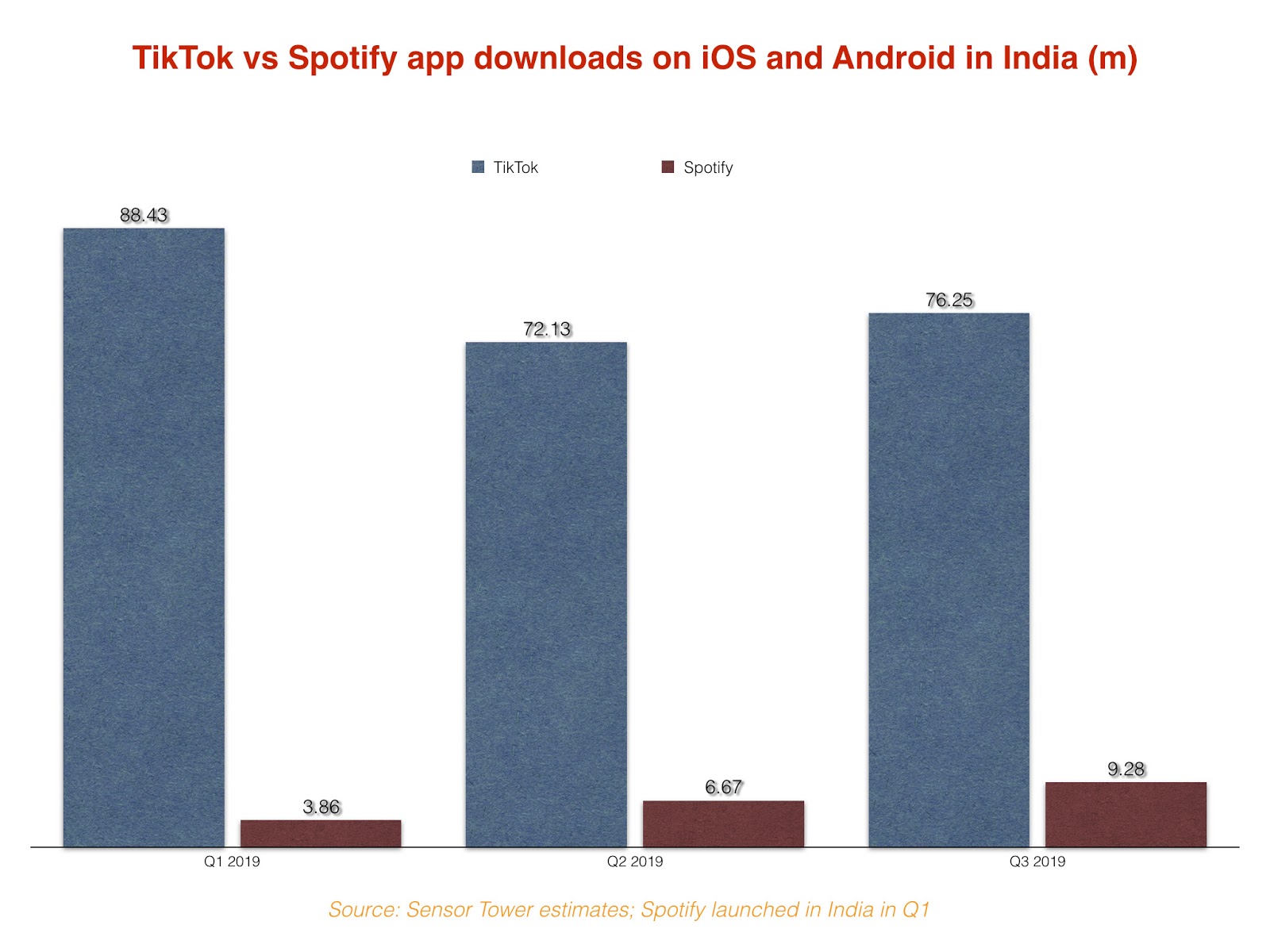 In the past few months, Spotify’s vision for its future prosperity has become clear. Part of its plan is, simply, podcasts, and how they can improve its advertising revenue growth while reducing its total content costs. Yet the other essential part of Spotify’s strategy revolves around user discovery of music and how, as the biggest player in the streaming space, Spotify can “control the demand curve,” as Ek infamously once put it.

Boasting of Spotify’s current market leadership versus Apple and Amazon, incoming Spotify CFO Paul Vogel said last week, “[Rule] number one: You need to break first on Spotify.” Bytedance might have something to say about that.

In addition to driving the early popularity of global hits like Lil Nas X’s “Old Town Road,” Blanco Brown’s “The Git Up” and Regard’s “Ride It,” TikTok has also fueled the popularity of viral breakthrough tracks in recent months like Ashnikko’s “STUPID” — which ended up with over 26 million plays on Spotify and topped its Global Viral 50 chart. This pattern — TikTok igniting virality of a track, which is then manifested in Spotify plays — is good news for Spotify in the short term. But it is also a clear indication of Spotify losing control of the “demand curve” for new music… to a fresh competitor.

Don’t forget what the FT said about Bytedance’s upcoming music app — that it will “encourage sharing and virality.” This suggests that lessons have been heeded from TikTok’s huge impact in setting recent entertainment trends.

3. TikTok is the future of music (if you believe Facebook)

Tamara Hrivnak, head of Music Development & Partnerships at Facebook, is a very smart executive. Earlier this month at the Paley Center in New York, as quoted in this column, she predicted that the future of digital media would be “video-first and interactive.” She then suggested that “it makes a whole lot of sense for Facebook and music to build that version of the future together.”

And there is no doubt that Facebook, with its 2.47 billion monthly active users, will play an enormous role in shaping the music business of tomorrow. But, according to Hrivnak’s rules, so will TikTok.

TikTok’s popularity to date has largely been propelled by the fact it combines the thrill of new-music discovery with elements of interactivity, involvement, and community. It sounds as though Bytedance is working carefully to ensure that this winning combination also comes across loud and clear in its new Spotify-rivaling music app.

Further evidence is now coming to light that Bytedance also wants to bring these elements into real-life scenarios: The Bangkok Post reported on November 21st that TikTok has expanded into selling concert tickets direct to fans in Thailand, as well as promoting local live events.

As one senior music exec who has seen elements of the yet-to-launch Bytedance music app told me the other day: “It’s not exactly Streaming 2.0, but it’s definitely something close to Streaming 1.5. For the first time, we’re seeing something that, if Bytedance gets the launch strategy right, might give people a real reason to cancel their Spotify subscription and switch to another service.”