Spotify is launching a new feature called Songwriter Pages that aims to give listeners a better look at the creators behind their favorite songs.

The streaming service has roped in hit writers including Meghan Trainor, Fraser T Smith (Adele, Sam Smith), Missy Elliott, Teddy Geiger (One Direction, Shawn Mendes, 5 Seconds of Summer), Ben Billions (The Weeknd, Beyoncé) and Justin Tranter (Selena Gomez, Camila Cabello, Imagine Dragons), who have all made their new songwriter pages available for music fans to view, though the program at large is still in beta mode. Not only is the project meant as a win for the nerdiest of music fans — it’s also potentially useful in connecting collaborators.

Jimmy Iovine and Dr. Dre Are Opening a High School in Los Angeles

According to reps, Spotify has seen a 60% increase in the crediting of songwriters by labels and distributors when uploading new music since it began publicly displaying song credits in 2018. Now, those credits are clickable, so users don’t have to copy and paste a name in Google and scour notoriously unreliable sites to piece together what else the creator has worked on.

To start playing around with these new capabilities, a user has to right-click on a track, hit “song credits” and select a clickable songwriter’s name. Spotify says the project aims to be user-friendly, transparent, and accurate. (That said, we’ve only seen the tip of the iceberg so far, and we’re talking about an iceberg as mainstream as the one that sunk the Titanic. The feat of collecting data for every indie darling will undoubtedly prove daunting.) 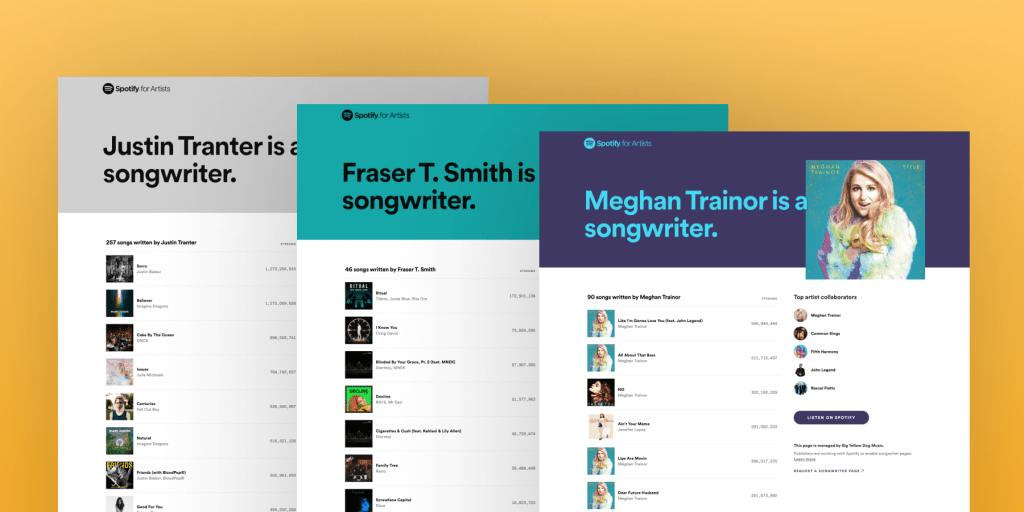 Assuming Spotify will roll the project out to a wider group of songwriters, this development could make the jobs of music supervisors — who are regularly tasked with finding and clearing the usage of left-of-center songs to soundtrack their film/TV projects — a little bit easier. And creators like it when music supervisors’ lives are made even the slightest bit easier, because those actions could lead the way to some seriously hefty checks from music spots in films, a.k.a. sync licensing.

Spotify’s new project will also show music fans a creator’s most-frequent artist collaborators. For songwriter/hitmaker Teddy Geiger, that means Shawn Mendes — with whom he wrote huge hits “Stitches,” “Treat You Better,” “Mercy,” “There’s Nothing Holdin’ Me Back” and “In My Blood.”

“Growing up, I looked at the back of my favorite albums to see who was involved in making them — from writers and producers to the engineers and instrumentalists,” Geiger said in a statement accompanying Spotify’s release. “Those credits inspired me to explore making music and it’s great to see Spotify supporting the work that we all do behind the scenes.”

Spotify’s Songwriter Pages also include “Written By” playlists, which act in essence like digital portfolios. “Spotify is always working to create new and better ways to promote music discovery — for artists, for songs and, increasingly, for songwriters,” says Spotify head of publishing and songwriter relations Jules Parker. “The launch of publicly visible songwriter credits on Spotify in 2018 was merely a first step. Together with the publishing industry, we’ve continued to evolve our data sharing and analytics efforts, and are proud to unveil this next iteration… We’re excited to see how the world interacts with these new features, and look forward to enabling them for more and more songwriters.”

Plus, it’s always a hoot to find out that Trent Reznor is credited on “Old Town Road” because Lil Nas X unknowingly sampled a track from Nine Inch Nails’ 2008 instrumental project Ghosts I-IV — or that Right Said Fred was credited on “Look What You Made Me Do” because Taylor Swift very knowingly drew inspiration from 1991’s “I’m Too Sexy.”