Sony has set up shop on Mulberry Street in New York’s Soho neighborhood this winter — not with a store, but a pop-up concert venue that doubles as a immersive recording studio offering “multi-dimensional audio technology” for people to create their own songs for free.

For the third installment of its “Lost In Music” brand campaign, the music-tech giant took a different spin on its previous two projects involving virtual reality experiences by building a physical, multipurpose concept space, which is open to the public now through February 10th, 2019. The retail-store-sized venue hosts a regular interview video series and weekly live concerts — performers on the lineup include Zara Larsson, A$AP Ferg, Tove Styrke and Snakehips — but its most interesting feature is its hands-on songmaking experience. Visitors cycle through the room and create a personalized song that is synced to their heartbeat, using a vocal booth, an interactive dance floor sequencer and walk-through drum spheres, among other features. In a demo to Rolling Stone, Sony engineers who designed the space said the idea came together a few months ago, with the intention of getting people to experience a song-making process as physically as possible.

The pop-up DIY studio is also emblematic of a greater trend: At a time when listening to music is cheaper and more accessible than ever, companies and artists have been doing everything they can to add an extra dimension onto music fans’ experience, physically or otherwise. “We wanted the guests to become music creators in the space,” Miki Anan, senior manager of entertainment partnerships at Sony Corporation, says. “Our biggest priority has been to provide fans a deeper connection to music through technology.” Anan chatted with Rolling Stone about how this particular space came together, and why. 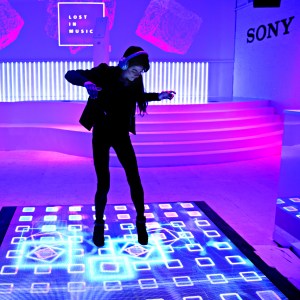 In 2017, we created a new immersive experience by combining a live music performance with virtual reality, in collaboration with The Chainsmokers. We also released a VR music video where users could choose an alternative path each time you go through the experience. In early 2018, we hosted concert events with Khalid and various other artists, where attendees entered the venue through a specially designed tunnel which utilized Sony’s spatial audio technology. We also launched another VR music video in collaboration with Khalid, utilizing a VR projection mapping technology developed by Sony Interactive Entertainment.

For the third installment of the campaign, we created a pop-up space in New York City, where attendees are able to create a personalized song based on their heartbeat, movements and vocals. We wanted the guests to become music creators in the space through this unique audio interaction process. Guests are also able to listen to artists’ tracks with Sony’s multi-dimensional audio technology at the space. This technology enables visitors to be truly surrounded by music from all directions. Through all the activations we have conducted, our biggest priority has been to provide fans a deeper connection to music through technology.

What were the most difficult parts of conceptualizing or executing the project?
The most difficult part of this project was coming up with unique music experiences for each installment of the campaign. Each year, we worked with various Sony groups and the creative agency to discuss how best to utilize the latest Sony technology and match it to the market trends and activations, to see what can really resonate with people. For the third installment, we wanted to provide an experience where guests can feel like they are creators themselves, which led us to the song creation experience.

How did you decide on the size of the space? Did you look at the maximum number of people that could fit in a venue and still make for an intimate concert audience?
Our number one priority was to be someplace where we could get the right buzz and foot traffic for a pop-up activation. We also did want to provide an intimate concert experience to the fans, so we thought that 201 Mulberry was the perfect size.

How do you view Lost in Music — as a venue, interactive space, or something else? And can we expect to see similar ventures out of Sony in the future?
For us, Lost in Music is an experience — one that allows us to showcase the unique and varied strengths of Sony, including our technology, creativity, and the talent of our artists, to the world. The pop-up experience will be closed on February 10th, but we hope to continue telling the Sony story through collaborations with our talented artists in the future.