Wall Street’s got its eyes on music this year, as a number of companies in the industry (Spotify earlier this year and smart speaker company Sonos just last week, to name two) make their public debut. As investors everywhere start to peer more closely at music-tech firms, Citigroup is offering them a comprehensive look at the state of finances in the music industry.

A new report from the investment bank, authored by its team of technology researchers and published Monday evening, brings a few key insights about how money moves through the U.S. music business in the digital streaming era. And the most striking detail within the report’s 80-something pages is not one fact, but a stark discrepancy between two of them:

1. U.S. listeners are spending more money on music than ever before: over $20 billion a year. Total music revenues — including from on-demand streams, CD sales, radio play, live events, advertising — have risen to about $43 billion a year.

Why? Because of all the “value leakage” involved in producing and distributing music, e.g. the costs of running record labels, streaming companies, satellite radio and other midpoints that have to exist between artists and listeners. “When you end up tracing all the dollars, around 10 percent of it gets captured by the artist. That’s amazingly low,” Citigroup’s media, cable and satellite researcher Jason Bazinet, who co-authored the report, tells Rolling Stone. “These young artists — you don’t even understand the gory details of the music industry or how the dollars flow. You’re really not going to make that much money. There’s an unbelievable amount of leakage through the whole business.”

The Surf Lodge Brings Lupe Fiasco, Amos Lee To The Stage This September

'Protect Survivors, Not Predators': Why a Former Nickelodeon Star Is Protesting the Network and Music Industry Institutions

Your Favorite Artist Needs Touring Musicians. Jammcard is Supplying Them

In an ideal world, artists would be able to deliver their music directly to fans and take the majority, if not all, of the profit. But the music business is still largely operating on the systems that it used to use decades ago, when songs were sold in stores and owned in homes and not licensed and leased via the Internet (as is the case with Spotify and its ilk). Consequently, there’s a tremendous amount of money that gets away from the artist as other players step in and help with music distribution and sales.

Citi’s analysts estimate that the friction will decrease over time, however. It notes that artists are already getting more of industry revenue than in past years through avenues like touring and self-releasing music — both of which generate much more money than a traditional record label deal. (The current 12 percent figure was actually 7 percent in 2000.) In addition, Citi predicts that the structure of the music industry itself will soon evolve to catch up with streaming and the digital age, leading to various companies consolidating and becoming music-media companies that can offer artists better deals. If Internet music companies were to “organically morph into music labels,” as Citi’s research report suggests, or if concert promoters merged with streaming services, the music business would be cutting out superfluous middlemen and offering that money back to artists themselves.

“The spending patterns have changed. The industry hasn’t yet reacted. That’s the next chapter.” — Jason Bazinet, Citi media analyst

“By vertically integrating, you can manufacture a star. That’s something the record labels can’t do,” Bazinet says. “I think consumer spending habits have already radically changed. What hasn’t occurred though, yet, is a corporate M&A among these big entities in the music space to respond to those changes. The spending patterns have changed. The industry hasn’t yet reacted. That’s the next chapter.” 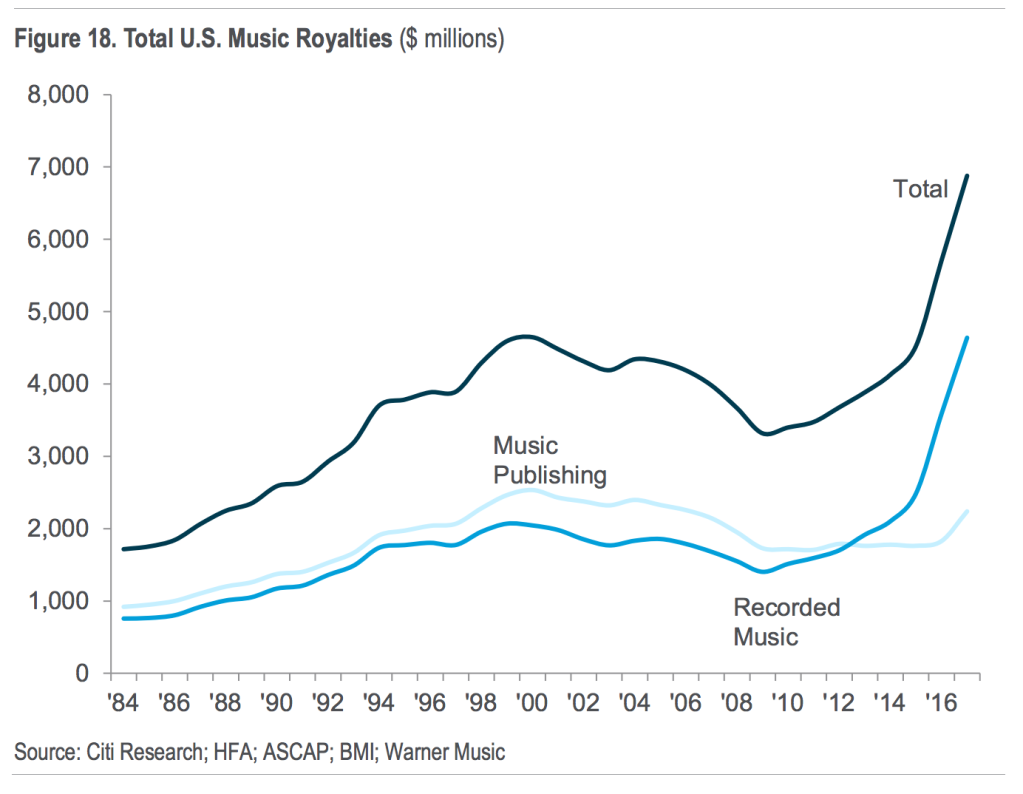