The moment Richard Coble has been anticipating will arrive in just over a month. At Dallas’ Globe Life Field on July 24th, the tour manager will gather together the members of Green Day from a warm-up room and walk them to the stage for the first show of their long-delayed Hella Mega tour with Fall Out Boy and Weezer. “They’ll all be laughing and you’ll hear the crowd getting louder and louder, and then you call ‘House lights!’ and it’s, boom, the show’s on,” he says. “After all these years, I love those moments when we’re about go on stage, all the apprehension and energy. It sends tingles down my spine as I’m talking about it.”

This summer and into the fall, touring professions like Coble will find themselves back on the road after a debilitating year of no work and perilous financial conditions caused by the concert business lockdown that began in March 2020. Yet as stoked as those workers are at the thought of their livelihood being restored after it was abruptly taken from them, they’re also grappling with one of the most daunting challenges ever faced in their business.

With Covid-19 tamped down but not completely vanquished, what will face these workers when they travel on buses and planes and then set up in arenas, stadiums, or theaters, surrounded by thousands of fans? “I’m completely vaccinated,” says David Morgan, who will resume his longtime role as James Taylor’s front-of-house engineer when Taylor starts a tour with Jackson Browne on July 29th in Chicago. “But there’s still the unknown factor of what happens when you get 15,000 people into an arena. We don’t know that yet. This is all uncharted territory.”

“It’s super-stressful,” says a vaccinated crew member on a hard-rock tour starting this summer. “I’m going to pack and get on the tour like normal, and either I’m on it for three months or I’m not. In some cases, we may end up with an extra day off somewhere because a show is canceled. But it’s a risk we’re all willing to take. We want our lives back.” 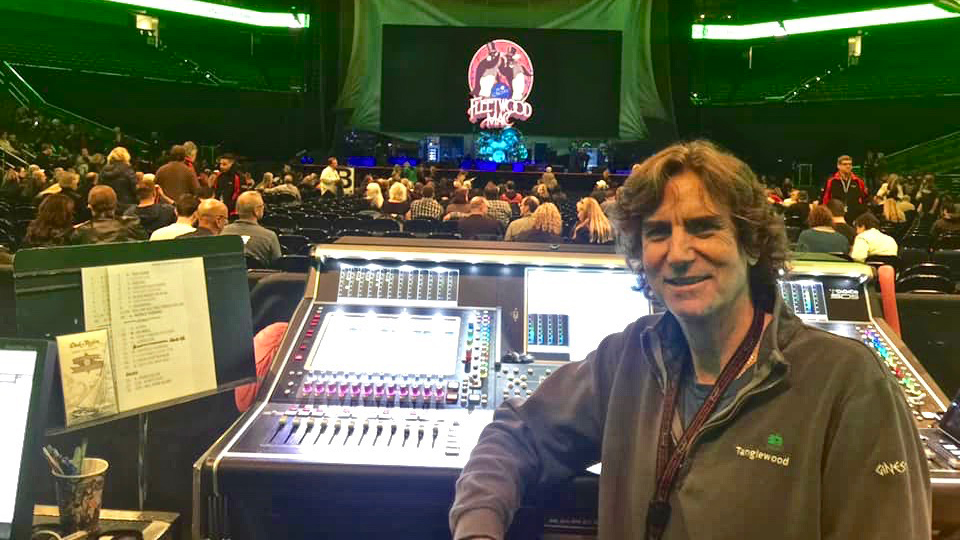 David Morgan has mixed live sound for Fleetwood Mac and James Taylor since 2005.

For just about every one of the nearly 300,000 members of the live-music business, the last year and a half has been brutal, mentally and economically. An entire industry was suddenly unemployed and unsure when work and paychecks would return. Nicholas Weldon, a video director who’s toured with Janet Jackson, Ricky Martin, and Kings of Leon, among others, was forced to take a job at his local Whole Foods in southern California. Over a year later, he’s still there and waiting to hear if any of his regular employers will be back on the road. He’s heard Martin is resuming road work in the fall, which could lead to work for him. “Same old, same old,” Weldon says. “Waiting for the world to reopen, hoping that concert touring will get back to normal. Everything I’ve had lined up has been postponed or canceled.”

Three months ago, Weldon had a taste of his former life when he was hired to work on a virtual show for Royce Da 5’9″  in Los Angeles. The setup wasn’t quite the same as Weldon’s normal work conditions: Only half the number of crew were there — all socially distanced, pre-tested for the virus, and wearing masks and gloves. Still, Weldon says the experience was “amazing,” even when he was rushing around putting out various technical fires (figuratively speaking) that night. “The entire time, start to finish, even the hectic parts, I realized how much I missed it,” he says. “I realized that being on the road really does fulfill my soul.”

But some crew members facing months of road work are balancing relief and trepidation.  Morgan, 72, was planning to retire last year, after one final tour with Taylor. But the postponement of those shows — and the $100,000 in income he lost — has forced him to resume this year and possibly next, with Taylor and/or another boss, Stevie Nicks.

For Morgan, who’s worked for Taylor and Fleetwood Mac since 2005 (and for Paul Simon for 20 years before that), the resumption of touring satisfies him on several levels. “I get to mix the best band in the business,” he says of Taylor’s musicians, “and it’s a stellar organization and such a joy to work with those guys all the time. One of the greatest pleasures I’ve had an engineer is just listening to these guys play every night.”

In his job, Morgan mixes the sound of each show as it’s being performed, angling for just the right nightly balance of voices and instruments. Morgan admits he may have to relearn parts of his job after more than a year of not pushing knobs and faders on his board. “There’s no prerecorded stuff,” he says of the tour. “Everything is being played live. But it’s never played with the same intensity or sometimes even the same notes as the night before. [Drummer] Steve Gadd may be really digging in, and people around him are going to have to play harder some nights. I have to put that together, and I’m looking forward to it. It’ll come right back, like riding a bike.” In that setting, Morgan is willing to wear a mask, but gloves are out of the question: “The job is too tactile for that. My hands are busy all the time.”

Like most front-of-house mixers, Morgan is the technician you see sitting in front of a soundboard in the middle of an arena, with only bike racks between him and concertgoers. “We’re normally pretty relaxed out there,” he says. “People can walk right up to me and tell me how much they like James Taylor and or tell me an interesting James story from years back.” Now, though, he worries about those fans — who may or may not have been vaccinated — getting literally in his face, and whether and how they’ll be screened before they walk into the venue. “I’m wondering how much physical separation there’s actually going to be,” he says. “I’m wondering what the vaccine policy in the building is going to be.”

Morgan isn’t concerned about his coworkers, who will likely all be vaccinated by the start of the tour. But other aspects of travel give him pause. “Does the bus have to be sanitized every day?” he wonders. “And if so, who’s going to do it?  You can’t expect the bus driver to be a housekeeping service as well. Is there going to be a strict no-strangers rule on the bus? Will that be enforced when we stop and restock the bus for food and other essentials? All those little details have to be worked out.” He’s been told answers to those questions are forthcoming.

Morgan takes comfort in the fact that he won’t be working in packed clubs (“a sweaty mess, and that’s the ultimate transmission medium for Covid”). For his part, Coble feels the same about the Hella Mega tour — which is playing outdoor stadiums, as it was initially planned before the lockdown. As Coble says, “The science tells me that outdoors is safe.”

According to Coble, the Hella Mega tour will have its own safety protocols: Everyone on the tour, from bands to roadies to bus drivers, will be required to have been vaccinated, creating what Coble calls “an invisible fence” around the touring party. He says they’ll also be testing crew members “when needed” and will have protocols for backstage guests, whether showing a vaccination card or being tested. A Covid compliance office will also be traveling with the tour, keeping organizers up to date on each state’s rules and regulations. Everybody on the tour will have to sign a “code of conduct” agreeing to adhere to those rules. Coble says he had to let go “a handful” of crew members who refused to get vaccinated.

But like others interviewed for this story, Coble isn’t worried about his own team as much as variables out of their control. That list includes local crews — the freelance workers who help the touring posse load in gear, run cables, set up stages, and other back-breaking work at each stop. Many in the industry wonder how many of those workers, who typically had other day jobs and only took on stage work as a part-time job, have left the business in the past year. “I’m over the anxiety of Covid,” says Weldon. “My anxieties would be: Are they going to be a skilled labor force, like the people we’re used to seeing, or will there be hired hands who could make things more difficult and take a lot longer?”

The question of whether those part-time employees will be vaccinated hangs in the air, as well. “That is actually a big issue,” Coble says. “We’re all vaccinated.  But we don’t know the locals. We’re concerned they won’t all be vaccinated and we won’t be able to have that mandated.”

And whether it stems from unvaccinated fans or local hired hands, Coble and Morgan also fret over the potential for outbreaks inside or outside of venues, forcing cancelations. “I’m more worried about unvaccinated people contaminating each other and ending the tour,” Morgan says. “If all of a sudden we see a huge spike in cases and they can isolate it to this particular venue, this particular city, everyone who was there — it turns into a cluster.” Coble admits that those fears also “keep you up at night sometimes.”

As that hard-rock crew member says, “It’s all about who’s going to go out first and how far can they go.”

But for the moment, crew people are focused on the specific parts of their job they can and can’t do — and that includes every type of interaction with people in those venues. “One of the most difficult things I’ve discussed with Billie Joe Armstrong is that we don’t think he can stage-dive on this tour,” Coble says. “But we’ll see. It’s a fluid situation.”