Earlier this month, I wrote that music-rights companies — not least Warner Music Group — could end up as attractive prospects for stock-market investors, as they would be largely insulated from the economic effects of coronavirus. (Warner announced its intention to IPO in February, but is now postponing that event.)

Last week, the U.K.’s Hipgnosis Songs Fund — whose business model is to acquire and manage the copyrights behind hit songs — saw its stock price rebound on the London Stock Exchange to a level actually higher than that seen before COVID-19. In the same period, the average share price of the U.S.’s largest companies, bundled into the S&P 500, fell by more than 25 percent.

The New Covid 'Omicron' Variant Has the Globe Freaking Out

Yet the performance of companies on public markets isn’t always tied to their underlying strengths and frailties — and the COVID outbreak has caused even further economic chaos in the past few weeks. So for music companies that aren’t purely catalog-focused like Hipgnosis, there may be more pain on the horizon than one might first assume.

The live side of the music business is bearing the brunt of COVID-19-related economic fallout, with myriad shows and festivals now canceled or postponed worldwide. But the past few weeks have also delivered a brutal run of news from the record industry, the most severe of which has emerged from Italy — where the country’s population has been on government-mandated lockdown since March 9th. According to local recorded-music body FIMI, whose members include the three major record companies plus BMG, Italy’s trade income from physical music (i.e., CD and vinyl) has tumbled 60 percent year-on-year in March so far.

What’s more, labels’ collective income from public-performance licensing — i.e., when music is played in shops, on the radio, or in live-event venues — has plummeted 70 percent compared to the same period of 2019. FIMI’s fear now is that elements of Italy’s lockdown (in the worse case, record stores and other music-using shops not being permitted to reopen) could last four more months, until July 31st — an idea which has already been drafted by the Italian government. This, says FIMI, would have “devastating” results.

A key observation from FIMI is that, with Italian shops shutting down and consumers rooted indoors, record labels are logically postponing “many” big releases until after the summer. This trend is already being mirrored in larger markets: Just this past week, we’ve seen planned blockbuster albums from the likes of Lady Gaga and Alicia Keys delayed, while Cardi B recently pushed back her new single “due to the virus.”

“The business has started to be affected by delays in new music releases, interruptions in supply chains for CDs and other physical music media, and a decrease in music licensing.”
—Sony Corp. statement on Sony’s Music operation

It is a common misconception that record companies make all of their money from that which gives them their name — records — being sold or streamed. The reality is more complicated: Labels do obtain the majority of their income from these sources, but also pull in revenues from areas such as live-ticketing (due to so-called 360 artist deals), merchandise, and two distinct types of licensing: public performance and “sync,” i.e., the use of music in movies, TV shows, advertising, and video games.

To get a handle on how much these areas matter to major record companies, I’ve taken a look through the financial filings of Warner Music Group. WMG is unique in music as it publicly reports its quarterly figures, but also doesn’t have a parent company (unlike rivals Sony Music and Universal Music), meaning more detail is available in its numbers. Here’s how the composition of WMG’s recorded music revenue — broadly reflective of all three majors — was made up this time last year, in calendar Q1 2019: 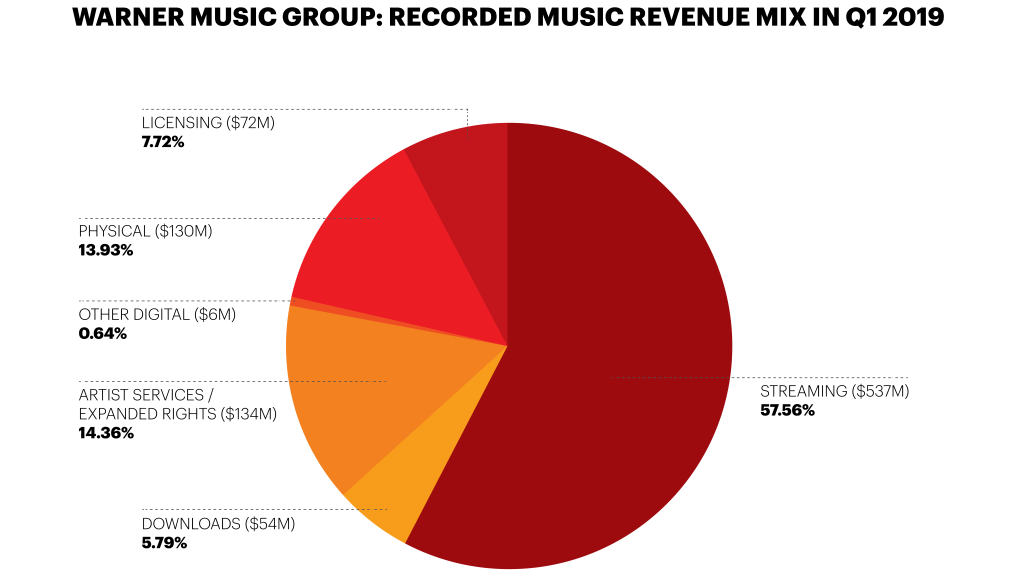 Using this as a yardstick, side-by-side with FIMI’s more-recent market estimates, is eye-opening. The total amount generated by Warner’s recorded music division in Q1 2019 was $933 million, setting a per-month average for the quarter of $311 million. A reminder: In March this year in Italy, according to FIMI, three weeks of lockdown has seen physical music income at the labels reduce 60 percent, with public performance down 70 percent. (FIMI has also said that sync licensing is “suffering” but has not put a number on its decline.)

For a worst-case hypothesis, let’s reduce Warner’s physical income by 60 percent in our Q1 2019 calculation, and the company’s “licensing” income by 70 percent. Already, that would pull down WMG’s quarterly recorded-music total by $128 million (or -13.7 percent), to $805 million — with physical’s three-month tally falling to $52 million and licensing falling to $22 million. In turn, this would see that $311 million average monthly revenue haul drop by more than $40 million to $268 million.

In addition, the major labels will now be seeing a hit in what’s often called “ancillary income,” but in Warner’s financials is described as “Artist Services And Expanded Rights.” According to the firm’s SEC filings, this segment includes “sponsorship, fan clubs, artist websites, merchandising, touring, concert promotion, ticketing, and artist and brand management”. The four standouts there, in the current climate, are merchandising, touring, concert promotion, and ticketing — all of which, to some degree, rely on concerts taking place. And, as you know, right now, concerts are not taking place.

In Q1 2019, Warner’s “Artist Services And Expanded Rights” revenues were $134 million, giving us a rounded per-month average of $45 million. If this $45 million monthly figure was then hypothetically reduced to $10 million by coronavirus (not a ridiculous suggestion, considering COVID-19’s devastating impact on live music), it would — combined with that speculative 70 percent licensing and 60 percent physical drop — be enough to slash Warner’s Q1 2019 revenues by more than 25 percent in this model.

Now, my hypothetical mathematics here are just that, and there are a few mitigating factors in Q1 2020 that could soften things considerably, such as: (i) Sync isn’t included in FIMI’s 70 percent licensing figure, and could be down substantially less, thus boosting Warner’s “licensing” sum in our model; (ii) FIMI’s recent numbers represent one of the world’s hardest hit markets, quarantine-wise, and may not translate to the rest of the globe (particularly the United States, where the incumbent president seems controversially keen for people to go back to work as soon as possible); and (iii) most important: In Q1 2020, you’d expect streaming’s contribution to a record company’s bottom line to claim a bigger percentage, and physical music a smaller percentage, than that seen in Q1 2019 (especially if major releases are getting pushed back).

However, what these numbers do show us is this: The world’s biggest recorded music companies might be insulated against the worst of coronavirus’ economic impact, but they are certainly not completely protected — and the damage wrought on their turnover, even across the space of just one month, may be more serous than your instincts suggest.

Note this solemn update to investors from Japan’s Sony Corp. on Friday (March 27th) about subsidiary Sony Music, the world’s second biggest record company: “Especially outside of Japan, the business has started to be affected by delays in new music releases, interruptions in supply chains for CDs and other physical music media, and a decrease in music licensing resulting from both lower advertising activity and delays in production for motion pictures and television productions.”

Still, the bulk of the majors labels’ future fortunes rests on streaming. As we stand, COVID-19 appears to have snipped somewhere between five percent and 10 percent off expected audio streaming volume on services like Spotify, both in the United States and worldwide.

This, in itself, won’t have much impact on label earnings. But should people now actually begin cancelling their music streaming subscriptions — hark at those eye-popping U.S. joblessness figures published last week — it will spell troubling news for the record business, which, before coronavirus dominated global headlines, looked like one of the most bulletproof modern industries on Earth.