Ten months ago, I calculated that DIY artists would earn more than $1 billion from their music royalties (records plus publishing) across 2019, stating this was a number that was “only going to escalate in the years ahead.” At the time, that risked sounding a little hubristic — but it turns out I might actually have been underplaying things.

Raine Group is a U.S.-based merchant bank that offers acquisitive guidance to companies in the music business, as well as investing in assets itself. Over the past 18 months, Raine has completed more than $600 million in music-related transactions — following its own $75 million investment in SoundCloud (2017), as well as its funding of Stockholm-born distribution- and label-services company Amuse (which worked with Lil Nas X before he signed to Columbia). More recently, Raine has advised the selling side on some major music-biz deals, including Downtown’s $200 million-plus buyout of CD Baby (and its parent AVL) last year, plus the sale of Amsterdam-based FUGA, also to Downtown, in January — a deal sources tell me was worth north of $40 million. Thanks to its relationship with these and other companies in the space, Raine has a unique perspective on the world of independent artists.

The Music Industry Has Neglected Its DJs. New Tech Will Change the Game

Inside the 24/7 Influencer Competition for a Major Record Deal

Now, Raine has prepared a white paper, reviewed by Rolling Stone, that puts a meaningful number on the commercial size of the independent-artist business. The headline: Raine’s “The Independent Artist Sector” paper estimates that independent artists generated $1.61 billion from recorded music in 2019 … and that, in 2020, this figure will climb 32 percent, to more than $2.1 billion. (View the paper here.)

Before we tackle the ins and outs of what these calculations mean for the music business, it’s important to clarify that, in Raine’s definition, “independent artist” broadly means “artist not signed to record labels.”

Making up a minor piece of the pie, Raine further counts within its total those independent musicians being directly commissioned to create tracks for production music and/or “sync” (in TV shows, movies, ads, etc.).

Overall (inclusive of a further $75 million from the production/sync indie-artist space), Raine believes that the money generated by this spectrum of independent artists will reach $2.12 billion in 2020. That cash haul, suggests Raine, will mean that indie artists are worth somewhere between nine and 10 percent of the entire global recorded-music market.

To put that into context: Warner Music Group, the third-biggest major recorded-music company in the world last year, turned more than $2.22 billion from streaming in calendar 2019, and $3.88 billion from all activities (including merch and ticket sales), according to MBW calculations. Raine’s market-share estimate looks in line with other forecasts: An update to Goldman Sachs’ influential “Music in the Air” report in 2018 predicted that the global recorded-music industry would turn more than $22 billion annually in 2020. 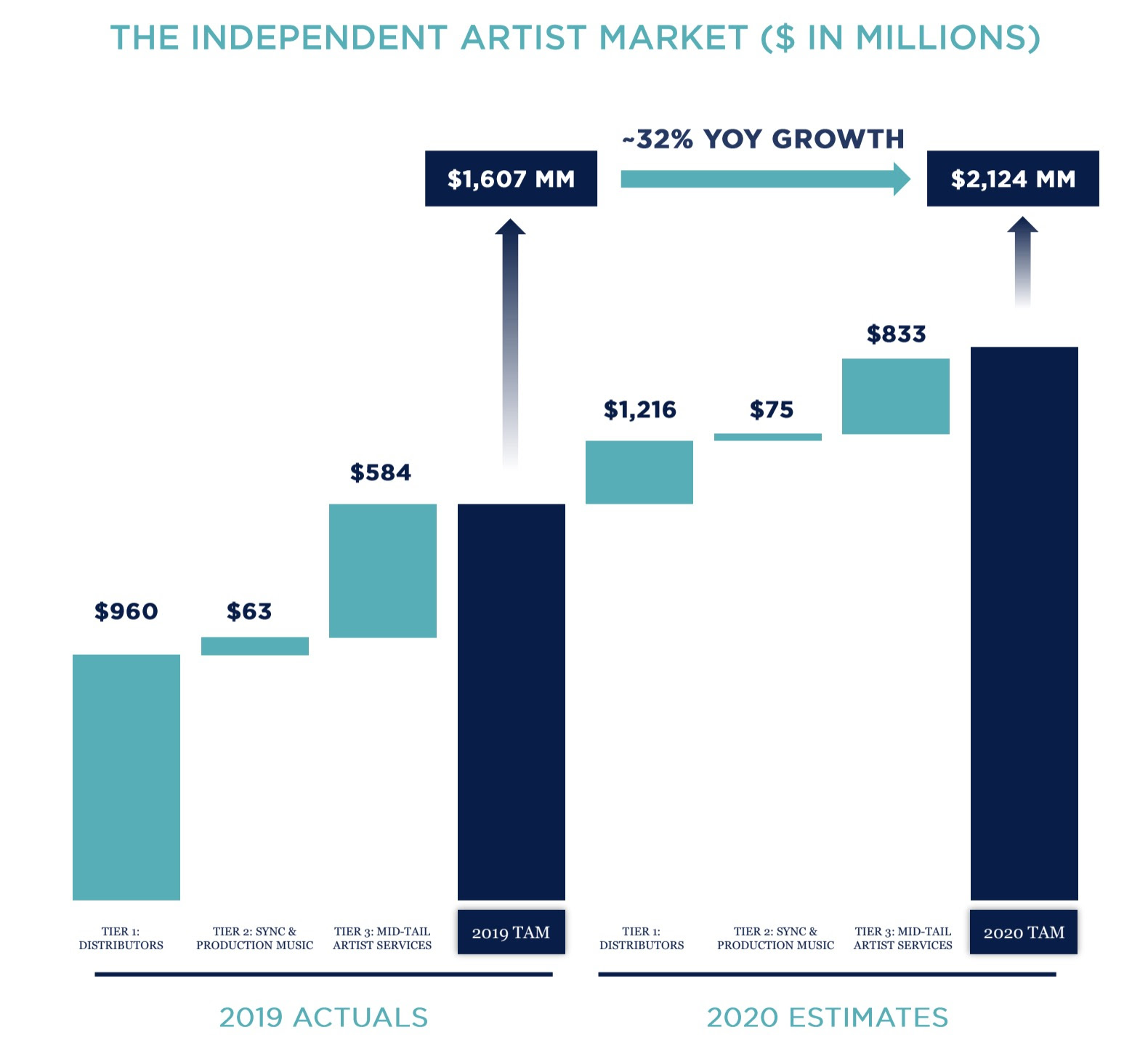 For Fred Davis, partner at Raine Group and co-author of the bank’s independent-artist report, this is just the beginning of a rapid market-share gain by nonlabel-affiliated artists. Indeed, Raine predicts indie artists will see their cumulative revenues grow faster than any other sector of the record industry in the years ahead.

The Raine paper explains: “Going forward, the independent-artist sector is projected by Raine to grow at a premium to the broader recorded music industry in line with historical trends (approximately ~4x). Our view is that this growth projection is conservative, given the massive growth potential in the sector and anticipated expansion into developing markets (e.g., China, India).”

Davis points out that, should the overall recorded-music industry grow at a 10 percent year-over-year rate in the years ahead, and the independent-artist sector keeps growing at 30 percent-plus, these nonlabel acts would claim 25 percent of the total global industry revenues by 2026. Adds Davis: “The independent-artist sector did not exist a few years ago, so the rate of growth is strong because the base it is working from is small and is ever-growing. Most of this growth will come from three factors: more and more artists creating, uploading, and streaming their music; the rapid growth in international markets where both distribution and services are maturing; and more success stories (i.e., hits) for independent artists in the sector.”

To remind you, Downtown Music Holdings has, in the past year, spent around a quarter of a billion dollars acquiring two companies servicing independent artists — CD Baby/AVL and FUGA. Evidently, New York-based Downtown is becoming a serious player in this space, with 585 employees working across 22 cities. (The firm also runs the publishing administrative service Songtrust — which, like CD Baby, Tunecore, etc., is best known for working with independent creators, specifically for collecting their songwriting royalties from across the globe.)

Justin Kalifowitz, CEO of Downtown Music Holdings, tells me, “The independent-artist market has been growing rapidly for several years, and that growth is what attracted Downtown to develop Songtrust and acquire businesses like AVL and FUGA.” He adds, “With innovative tools that are leveling the playing field, significant investment in fast-growing emerging markets like India, Latin America, and Africa, along with a strong sentiment by artists and their advisers that an independent career is not only possible, but is rather preferable, we expect the growth [of the indie-artist sector] to only accelerate in the years ahead.”

Milana Rabkin Lewis is CEO of Stem, an L.A.-based artist-services company that is financially backed by the likes of Scooter Braun, and has previously worked with Frank Ocean and Childish Gambino. Last summer, Stem shut down its TuneCore-rivaling DIY distribution platform, instead opting to work exclusively with a hand-picked roster of indie artists. Says Rabkin Lewis: “As more managers take on the tasks of artist development and assemble teams in-house to handle marketing and promo, the independent sector will flourish more and more. In today’s music business, an artist with sufficient resources can hire the same promo and A&R executives that a label can.”

That said, Lewis believes the record industry’s largest players won’t sit by and let the fastest-growing segment of the global business flourish completely outside of their walls . She predicts that “while we will continue to see growth in the indie sector, I think the major labels will be pressed to evolve their deal structures in order to incentivize independent artists and labels to move back under their umbrellas.”

Tim Ingham is the founder and publisher of Music Business Worldwide, which has serviced the global industry with news, analysis, and jobs since 2015. He writes a weekly column for Rolling Stone.