There Was No Song of the Summer This Year - Rolling Stone
×
×

Summer’s sprawling, sweaty days used to hum to a clear anthem every year — a mega-hit song that defined the airwaves and earbuds of the season, instantly recognizable and permeating as deeply as heatwaves themselves. Songs of the summer, which get so much attention every year that they practically belong in their own musical genre, were fairly easy to identify back in the days when major labels and radio programmers called the shots and chose to crown one or two lucky hits.

Every Time Someone Streams 3lau's Next Song, Fans Will Get Paid

On the Set of Fox's Trippy New Reality TV Show, Which Turns Singers Into... Aliens?

But what was the biggest song of this past summer? Now that we’re far enough out of the season, we should be able to look back and pluck out the biggest hit of 2018’s beach days — except that there isn’t one. Thanks to the dizzying buffet of ways that music fans find music today, it’s impossible to produce a clear winner. Rolling Stone took a look at three different consumption platforms — iHeartRadio, Spotify and YouTube, representing broadcast radio play, music streaming and video streaming, respectively — to see how differently the most popular songs stacked up via different listening methods. (Note: iHeart tracks are tallied by total audience spins on the company’s stations, while the latter two platforms are counted by individual, on-demand streams.)

From May to August, terrestrial radio stations in the U.S. blasted poppy tracks like Post Malone’s “Psycho,” Zedd’s “The Middle” and Taylor Swift’s “Delicate,” according to spin counts provided to Rolling Stone by iHeartRadio. The country’s biggest radio station operator has over 850 stations under its umbrella, including New York’s massive WLTW “Lite FM” station and the popular KIIS-FM in Los Angeles. But over on streaming services, according to data provided by Spotify and YouTube, fresher crowd-pleasers from Juice WRLD, XXXTentacion and Cardi B reigned supreme. 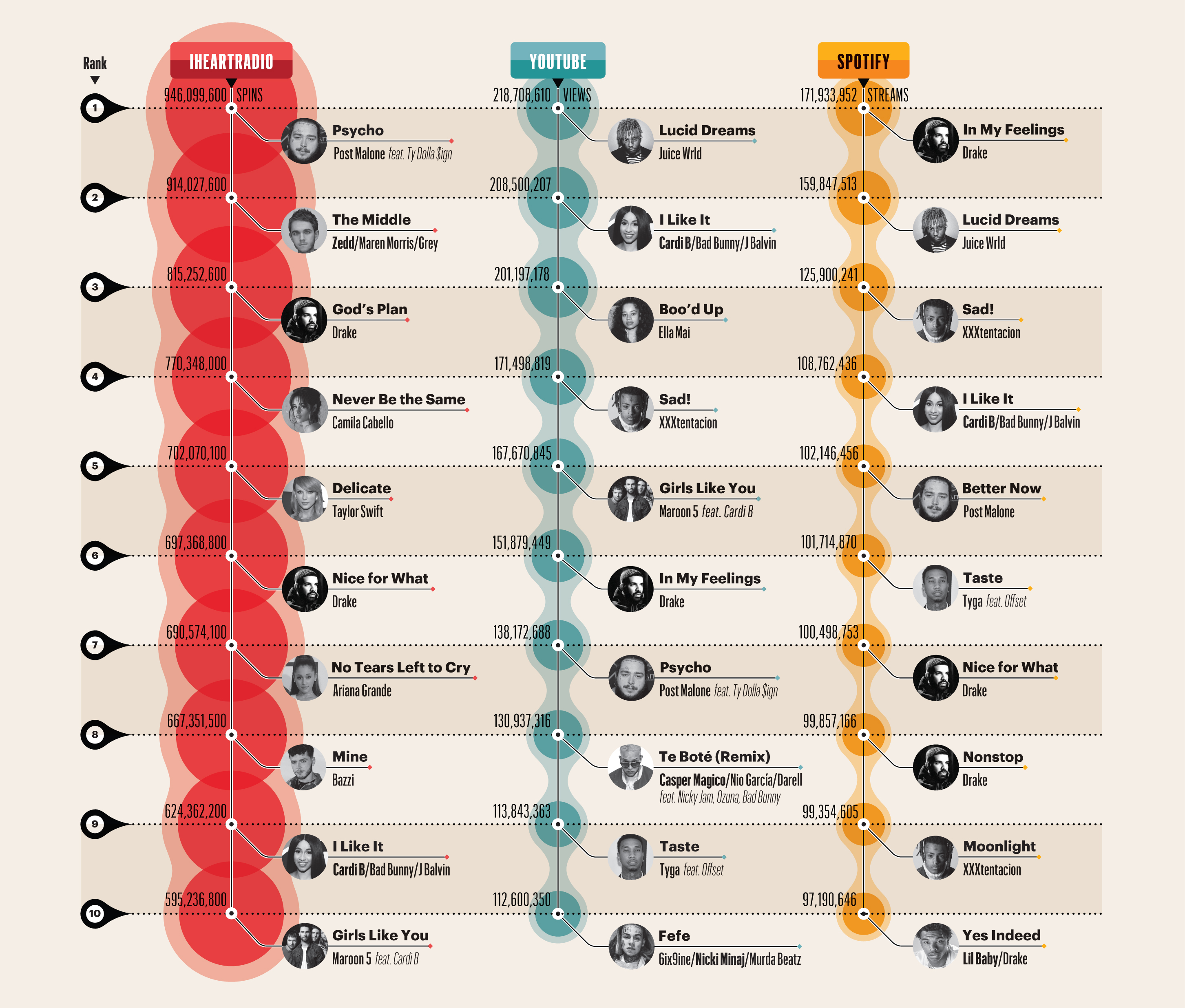 Much of that difference comes down to on-demand streaming’s young digital audience that tends to browse through new music and bump promising hits to the top very quickly. Meanwhile, while AM/FM radio remains the most popular way that Americans of all ages listen to music — 93 percent of adults tune in at least once a week, according to stats from Nielsen — the format, by nature, takes a while to catch up on trends. Many regional and local station managers say they’re hesitant to put a track into rotation unless it’s already proven its appeal with a broad audience, which results in a three-to-six-month delay from when the song first starts spiking the music world’s attention. (And often a catch-22 of bias toward what’s already popular.) “The mass audience isn’t always in sync with streaming trends, which are driven by a smaller segment of active consumers,” Tom Poleman, the chief programming officer of iHeartRadio’s parent company iHeartMedia, tells Rolling Stone. “It usually takes longer for summer songs to fully establish with both the active and passive audiences.”

But while the split between passive and active listeners plays a role in the lack of overlap in the infographic above, there’s also simply too much new music now — all the time. Music streaming has jump-started the pace of recording, producing and releasing. The furious flow of new tracks makes it hard to say which song was truly “number one” over any given period even within a single streaming service. “As opposed to years past, I wouldn’t say there was a single dominant song across the country this summer, and we’ve seen that some tracks are more popular regionally than others,” Kevin Allocca, head of culture and trends at YouTube, tells Rolling Stone. “Last summer, for example, ‘Despacito’ and ‘Shape of You’ were seemingly ever-present as ‘Despacito’ was on its way to becoming the most played video ever on YouTube.” Allocca adds that YouTube’s sprawling audience makes the platform’s own rankings of popular music “increasingly more diverse, which makes them hard to categorize as a whole.”

That’s not to mention all the songs that bubble up in digital plays and views because of reasons outside of the music itself: Drake’s“In My Feelings,” for instance, racked up 171,933,952 U.S. Spotify streams largely off the backs of viral online memes. It didn’t crack the Top 10 on iHeart’s stations. So if you’re someone who listens to music only via the radio, you might have totally missed how dominant the song was in the millennial zeitgeist this summer.

What about the charts, which surely can give a definitive answer? Sadly, we can’t look to their numbers to settle the debate. Because music charts nowadays compare streaming numbers against traditional album sales — to a somewhat arbitrary rate of 1,500 streams equalling one album purchase, which is made even murkier by some chart-makers deciding to weigh paid streams more than free streams — they don’t reveal popularity so much as gameability. (Anyone can essentially hack their way to number one with the right release strategy or enough fanbase enthusiasm.)

As a result of the old days’ simple record-store sales ledger being replaced by all sorts of numbers sprouting out from dozens of sites and platforms, music fans can’t say with confidence that any specific song won over the summer of 2018 — because it depends on who is measuring it. On music-makers’ side, that’s a blessing and a curse. There are now more chances to get to number one, but it also takes more effort to stand out from the crowd. “Artists are releasing more songs in rapid succession, which shortens the time they have to develop,” Poleman says. “We’ve seen [the speed] often result in some songs not realizing their full potential.” Of course if you’re someone as big as Drake — who saw four different tracks lodge into the top ten of iHeart radio stations, Spotify and YouTube this summer — you can use the fragmentation to your advantage.