To find a song that matches our mood, in the 21st century, we need only type in how we are feeling or walk into a new room, and a streaming service’s algorithm will grab that data and intuit our needs with unsettling ease. But well before predictive computer models were let loose on music, German composer Christian Schubart was already on the case — albeit with manual handiwork and antebellum verbal flair. Schubart was a forefather of musical category creation: In his 1784 essay “A History of Key Characteristics in the 18th and Early 19th Centuries,” he balanced a study of the harpsichord with insights from literature and psychology to match all 24 major and minor musical keys to different auditory personalities, which streaming’s predictive models would later automate.

“Melancholy womanliness” was Schubart’s preferred term in describing the D minor key, a key of particular fascination because it lent itself to music in which “the spleen and humors brood.” And its sibling key, D# minor, somehow evoked “feelings of the anxiety of the soul’s deepest distress, of brooding despair, of blackest depression, of the gloomiest condition of the soul,” Schubart observed: “Every fear, every hesitation of the shuddering heart, breathes out of D# minor. If ghosts could speak, their speech would approximate this key.”

The post-Shubart twelve-tone equal temperament system divides the octave into 12 parts, so that distances between notes remain the same — which means that keys no longer sound so different from each other in a structural sense, and that it’s the chord structures within keys that define sounds. This should render Shubart’s argument moot. With equal temperament tuning, musicians can transpose songs between keys, and keys themselves are less important to the underlying personality structure of songs. Yet modern songs written in D and D# minor, by and large, still deal with misery. As Nigel Tufnel, the waggish musician protagonist of the 1984 mockumentary Spinal Tap, said when putting his sentimental “Lick My Love Pump” in D minor: “It’s the saddest of all keys. I don’t know why, but it makes people weep, instantly, when you play it!”

Is it really the “saddest key”? Of course, D minor doesn’t hold the musical monopoly on sadness (nor D# minor, its close sibling). People often connect negative emotions to other minor keys such as A minor, E minor and B minor. Even the most used keys of C, G, and A major, when paired with the right lyrics, can convey melancholy emotions, as in Prince’s “Purple Rain” and The Beatles’ “Yesterday.” But an analysis of key usage across popular music shows that contemporary artists do tend to avoid D minor — and there are a number of reasons as to why this may be. 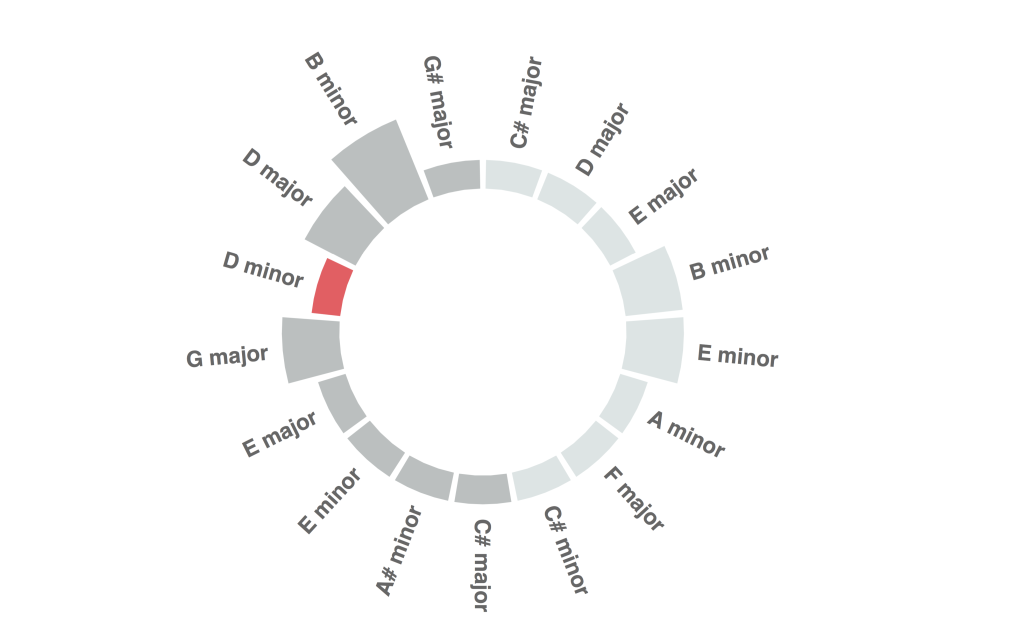 What might make D minor so glum is that the chord’s tonic, or its tonal center, is the downbeat D minor itself. Minor chords in general are so poignant that they’ve been central in studies on children’s emotional perception of tones.

Music theorists debate the mechanism behind that despondent sound. Some quick context for the uninitiated: A chord consists of three notes — first note (root note), major third, and perfect fifth. In a minor key, the second note in the triad is lowered a half step from its major-key version. This so-called “flatted third” is closer to the root note, and the distance from the major third is thought to create peripheral dissonance and a jarring discomfort in the listener’s ear. And by making the note go a half-step down rather than up, it creates a “feeling down” directional emotion. The anguish of hearing a minor key may also be psychologically associative: Babies quickly learn to distinguish smiles from frowns, and they may similarly pick up “sad” versus “happy” sounds programmed in toys and TV shows.

When played on a guitar, the open version of the D minor chord crosses three frets on the highest strings, and the guitarist must press down a pinky and ring finger on the three smallest strings in a move atypical to the shape underlining other open chords. It’s not an intuitive position. Unlike its cheerful cousin, the D major chord — which Schubart characterized as “the key of triumph, of Halleluiahs, of war-cries, of victory-rejoicing” — the D minor chord is not beginner-friendly.

But whether out of intentional history-informed avoidance or not, the “saddest” bands don’t trend toward Shubart’s “brooding” D minor. The Nirvanas of the world instead build depressive sounds through melody and song structure. Nirvana’s Nevermind and Radiohead’s In Rainbows are often considered two of the most depressing albums to listen to, but Radiohead crafted its gloomy tone across major keys, and only one song off of both albums (“Polly” from Nevermind) is in D minor.

As a case study, consider the D minor song “Nutshell” by Alice in Chains. Over three chords, Layne Staley tells of loneliness and despair: “We chase misprinted lies, we face the path of time, and yet I fight this battle all alone, with no one to cry, no place to call home.” “Nutshell” is often played with the guitar tuned down half a step (to E flat minor, the enharmonic equivalent to D# minor), so that the second down of each measure accentuates the D# sound; at the band’s well-regarded 1996 MTV Unplugged performance, the lead guitarist outlined the E-flat minor rhythm progression with notes from the D# minor scale, milking emotion out of the sound. The single makes an appearance on Rolling Stone‘s reader-chosen 10 saddest songs of all time — but it is the only one in the top 10 written in D minor. 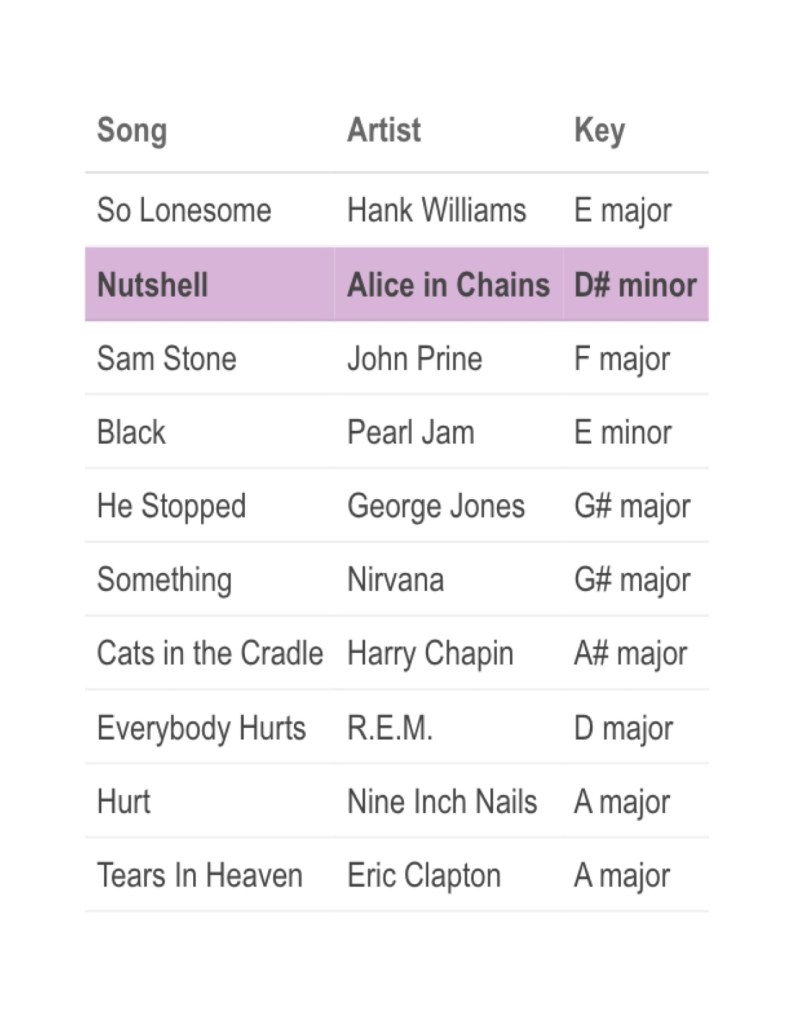 Why would a key known for sadness only appear once on the list? Perhaps because, as mentioned, it’s simply more difficult to handle the non-standard tuning of D minor on guitar.

Or perhaps it’s because D minor chord progressions have a tough time building suspense, unlike those of other minor keys — or like the irony-laden major-key composition of “Everybody Hurts.” Just as a story moves from rising action to climax to denouement, a chord progression follows a structure of suspense and resolution. The 1-4-5 progression, for instance, follows a predictable and calming resolution that makes it a favorite for pop artists. Think of the almost irresistible resolution you reach when humming “Twist and Shout.” Other keys have certain chords that contribute crucial suspense, like with the denouement of C7 rounding out the E minor key (listen to the buildup in “I’m “Only Sleeping”), or the triumphal release of the F major progression (Paul McCartney’s rapture in “Hey Jude”). By contrast, D minor’s chord progressions feel more uniform across the board.

Another consideration is physical sound quality. Extremes of sound quality seem to strike in many D minor songs, where artists do one of two things. Either they go all in on the negativity (e.g. “Nutshell”), or they take pointed measures to enliven the D minor key, such as changing the timbre by altering guitar effects and tones, or adding a strong backbeat or a heavy lyrical count.

Beyoncé’s D minor “Crazy in Love” was number One in the U.S. in 2003 and became a seminal song of the decade. It begins with a heavy marching band buildup as backup singers jump into a wordy beat. The repetitive chorus is accompanied by a funk-style dance rhythm, and further accentuated in its poppy music video. All of this is underlined by lyrics describing an obsessive love (perhaps one so crazy that it harkens back to the “deepest distress” Schubart had in mind). 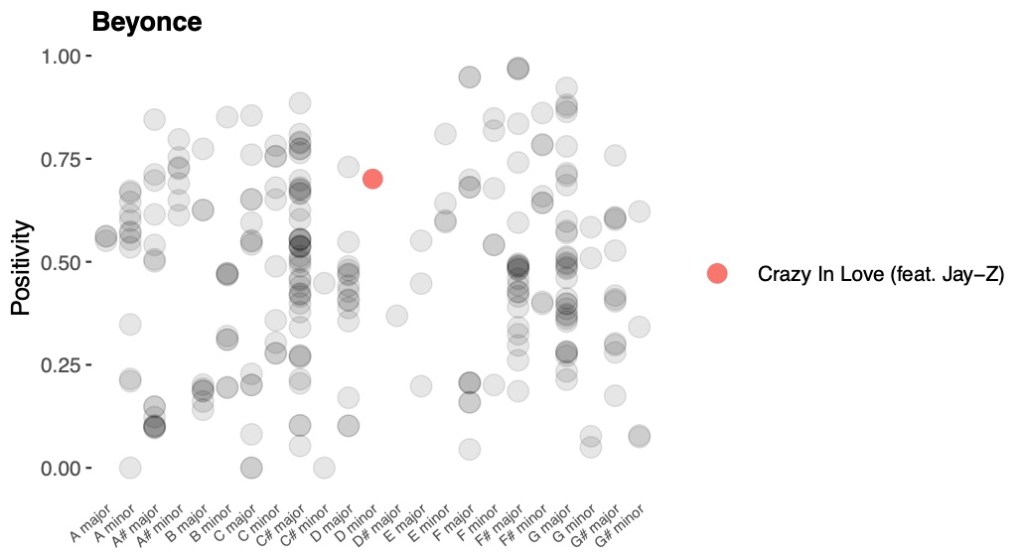 “Crazy in Love” is Beyonce’s sole track written in D minor to date — though the key is all but hidden by the energetic pulse and visually exciting music video. When the song is played in stripped-down acoustic chords, however, D minor takes center stage. Queen Bey’s own austere remake recorded for the Fifty Shades of Grey soundtrack also reveals something of its true ethos.

Taylor Swift is similar. Among the 336 songs she has released, across 23 albums, only one song is in D minor. Like “Crazy in Love,” the track in question — “I Knew You Were Trouble” — hits in in her top quartile of positivity. And, again, a theme of hysterical love is front and center: The song is about “being frustrated with yourself because you have your heart broken and you know when you first saw that person you saw all these red flags and you just went for it anyway,” Swift has said publicly about the song, which is rumored to have been written about her relationship with Harry Styles. 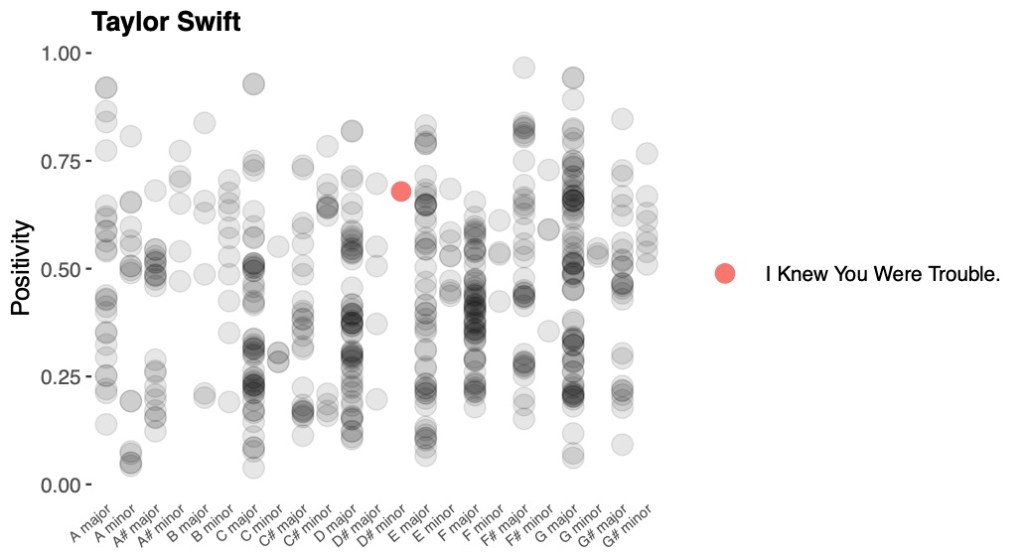 The trend persists in classic rock, where only 2 percent of songs in a randomly sampled “Classic Rock” playlist on Spotify were written in D or D# minor. Additionally, positivity spreads well across keys — perhaps because these keys are frequented by artists in their song writing. Songs in D minor seem more likely to hit on one end of the emotive spectrum: either very positive or very sad. In the first extreme, artists use the D minor melancholies to their advantage (“She’s So Heavy,” “The Prophet’s Song,” “In the Air Tonight”). In the other extreme, the artists pumps up extra feels like backbeats and vocals to trend on the side of positive polarity (“Can’t Stand Losing You,” “Love Is a Battlefield”).

Schubart talked of a “brooding love.” Fittingly, many of these overly positive songs in D minor read like animated love songs on the surface, until you take a deeper look at the lyrics. These songs tend to put on a happy face in the face of brooding despair, and the manic mutability of D minor is overshadowed by an outwardly upbeat pop jam.

After all, what is sadder than a sadness that needs to be so cloaked?

Measures of valence across keys for randomly sampled songs off of the “Classic Rock Top Played Hits” playlist on Spotify.

The musical gymnastics that artists perform around this troublesome minor key raise a good question: Does one have to be sad to write a good sad song? In the move Almost Famous, the fictional, precocious Rolling Stone critic holds onto the question for a long time. And it is a question that musicians from Schubart to Nigel Tufnel ponder. As hit songs have shown over many decades, one can certainly write a happy song in a minor key, and one might also find luck writing a sad song in a happy key.

But this quantitative rock critic has one specific piece of advice for musicians — which is that writing anything in D minor is tricky, no matter what combination you are looking to strike. The brooding D minor desperations may be deep within all of us, but it takes a particular talent to draw them out and turn the sound of unflagging woe into something marketable.

Kat Wilson is a Ph.D student in quantitative methods at the University of Pennsylvania. She writes about music, using data, and recently analyzed the distinctive sound of live music for The Pudding.

Read next from Rolling Stone:
The Death of the Song of the Summer
Who Listens to Albums Anymore?

In This Article: data analysis, RSX