Why the 'Creator Economy' Is Music's Biggest Lie - Rolling Stone
×
×

Want to hear the most depressing stat in modern entertainment? It was effusively delivered the other month by a beaming Jack Conte, co-founder and CEO of fan-funding app Patreon, which is now worth $4 billion. “A study published a few years ago showed that 75 percent of kids aged 6 to 17 want to be an online video creator when they grow up,” boasted Conte in a YouTube video. “There’s an entire generation of kids watching today’s creators making videos, making podcasts, shooting the shit with their friends, building kick-ass businesses, making money. No wonder these kids want to be creators when they grow up!”

In Conte’s view, it’s cause for universal celebration that three-quarters of children are plotting a career in dicking about in front of a webcam. In his words, this is the bedrock for a “second Renaissance” that will render da Vinci & co.’s three-century effort as a mere “blip in a history book.” (Yes, he really does say this.)

Katy Perry, Nas, and Jason Derulo Are Investing Big in a Spotify Rival

Spotify Took Down Their Music. They Still Don't Know Why

The question to ask in response to the 75 percent stat isn’t whether the next generation’s ludicrously optimistic life-plan will engender a new creative class; it’s about what role the remaining 25 percent is expected to play. If everyone’s a creator, who’s the audience? Moreover, in a supply-and-demand economy, when the creators are the majority, and the audience the minority — who’s paying who?

Of course, Conte isn’t supposed to ponder the ramifications. He only means to whip up the hopes and dreams of millions of online creators, which Patreon can then harvest for profit. Patreon makes money by dipping into the revenue of DIY entertainers and taking a percentage of their fan subscriptions. Even if these creators are individually making meager moolah, so long as there’s huge volumes of them, Patreon prints cash.

To perpetuate this scale-dependent business model, Patreon, like many other creator-serving tech companies, dangles a hollow promise: If you were born to create, there’s a bonanza waiting for you just around the corner. It’s that other guy, the one in the adjacent “For You” window, who’s a misguided Joe Schmoe; you, friend, are a true artist, and your art is worth money!

The online influencer community should really beware this Kool-Aid. For proof, they can gawp at the music industry — where a new generation, high on the vanity metrics of streaming, is now experiencing the crushing reality of the so-called “creator economy” (or as Conte and some other execs spin it, the “passion economy”).

Just last week, politicians in the UK, following an eight-month investigation, concluded that music streaming’s commercial apparatus is in need of a “complete reset.” Yet their report came unstuck on its very first page: “Some successful, critically acclaimed artists have found that the earnings from streaming ‘are not significant enough to keep the wolf away from the door,’” it said.

The problematic word there: “Successful,” which is — surely deliberately — left undefined. What is a successful artist in the democratized streaming age?

The “wolf from the door” quote is an overt reference to acclaimed British singer-songwriter Nadine Shah, who used the phrase when giving compelling evidence to the politicians’ inquiry in November. With Covid hijacking any hopes of touring income, said Shah, she’s struggling to pay bills from only streaming revenue. She currently has 71,378 global monthly listeners on Spotify — which seems like a lot, on the surface. But thanks to the mass of creators now clamoring for a finite audience paying fixed subscription prices, it’s actually relatively little. Each day, Shah is battling over 7 million fellow artists for a piece of Spotify’s zero-sum worldwide royalty payout.

Digging around on Spotify’s royalty explainer “Loud & Clear” offers some insight into just how unforgiving the minimum requirements of “success” have become. Spotify proudly tells us that 57,000 artists currently share 90 percent of the royalties it pays out. In 2020, Spotify paid out around $5 billion in recorded music and publishing royalties; 90 percent of that would be $4.5 billion. The 57,000 acts sharing this money are what we can justifiably call Spotify’s “Gold Club.” They represent just 0.8 percent of the total artists on its platform.

So, if you’ve reached the “Gold Club,” sharing in the 90 percent of Spotify’s royalties, that’s success, right? The press releases suggest yes, but common sense tells us probably not: 57,000 individual recording artists is enough to pack out Madison Square Garden twice over.

Where does the threshold guillotine for a “successful artist” really fall? 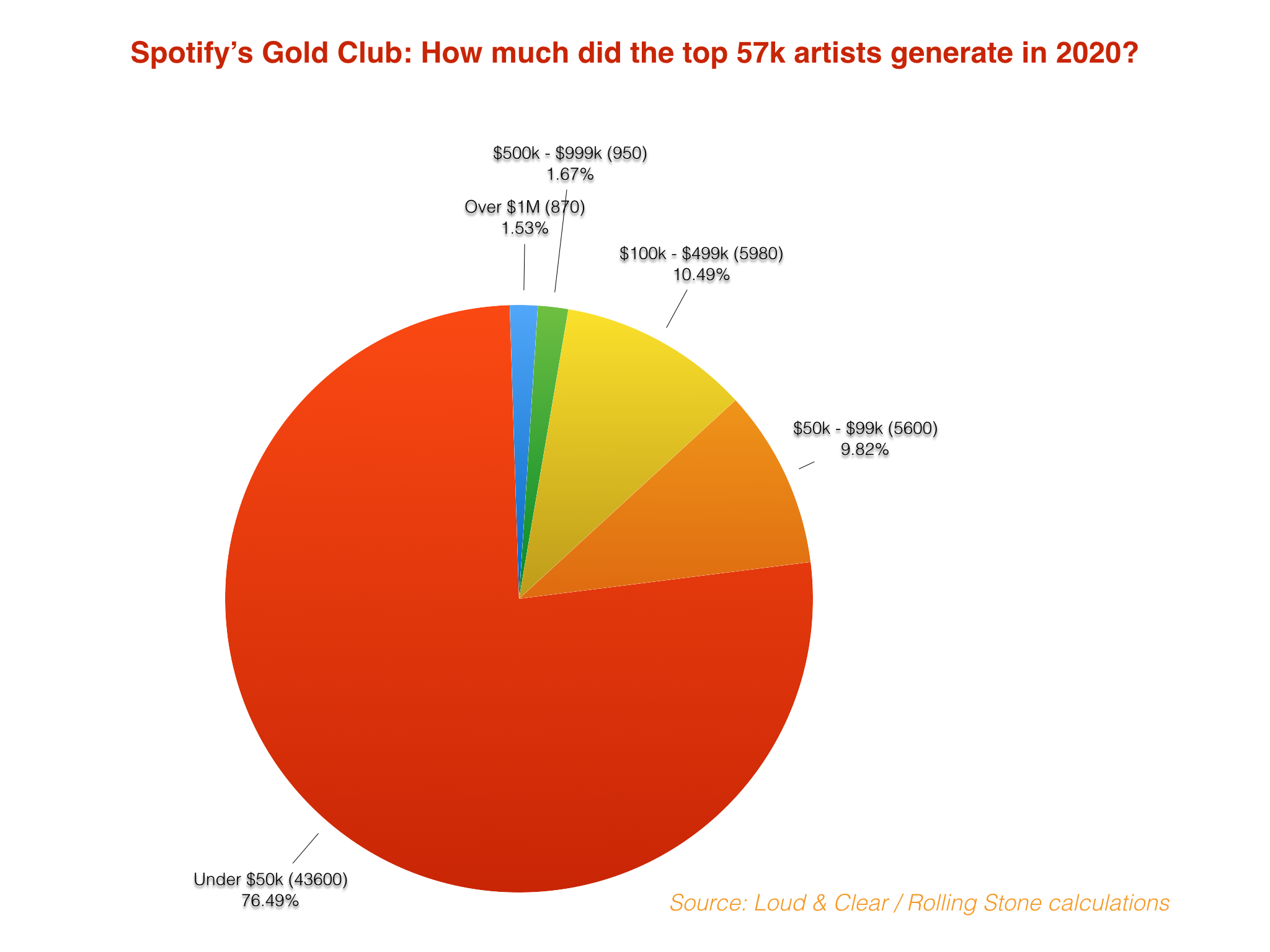 Delving into these granular stats guarantees us that these 13,400 artists — the $50,000-a-year-plus minority within our 57,000-strong “Gold Club” — cumulatively generated a minimum of $2.22 billion on Spotify last year. More likely, they generated over $3 billion.

That would leave a smaller pot, $1.5 billion, to be shared out amongst the “Gold Club’s” second division — the remaining 43,600 artists sitting beneath the $50,000-per-year bracket.

Obviously, the more popular artists within this 43,600 would claim the lion’s share of Spotify’s $1.5 billion. Yet even if this figure was somehow spread equally amongst them, it would still only equate to $34,404 per artist per year. (Shah sits within the lower reaches of Spotify’s “Gold Club”, with “Loud & Clear” ranking her within the top 56,000 most popular artists on the platform.)

This all reveals a painful truth: Even among the elite 0.8 percent “Gold Club” of artists on Spotify, there is a vast disparity between successful and unsuccessful, with the majority of artists firmly in the latter category.

Wolves, please remember to wipe your feet on the way in.

Obviously, the “passion economy” isn’t working for the the 99.2 percent of Spotify creators outside of the 57,000 top tier. But, as demonstrated by Nadine Shah, it’s also not working for a significant proportion of the 0.8 percent “Gold Club” elites who find themselves simply too far down an expanding roll call of 57,000 acts to make decent money from streaming.

We could argue whether a reworked payout model would make a difference here. If royalties were divided not from one fixed pie, but via a fan-centric model, might it help improve the low-paid artists’ lot? Some reports suggest this change wouldn’t make a big difference; the likes of SoundCloud, and now Portishead, would strongly disagree.

It also bears noting that, of course, artists like Nadine Shah can leverage their visibility on Spotify et al to build business elsewhere — for instance, radio, retail, direct-to-consumer outlets like Bandcamp, or live shows that garner five-star reviews in broadsheet newspapers.

But to say that the creator economy alone is working for successful musicians is deeply flawed.

I’d like to focus back on Jack Conte, selling his creator utopia on the 75 percent of kids who want to become video creators. Conte knows the millions of participants in his “passion economy” don’t only bring their uploads to the party — they bring friends, family, listeners and subscribers; they bring online marketing and social media promotion; all tools to battle odds that are wildly stacked against them. The sum total of this self-starting creator promotion, across millions and millions of accounts, drives mass audiences to the platforms. Tech businesses make much money, and recruit a lot of subscribers, from this creator frenzy.

Perhaps, once the prosperity of big tech from the “passion economy” crashes into the reality already evident in the music industry — that 99-percent of artists are failing to make decent money online — we might see the 75 percent of kids curbing their interest in becoming creators. Perhaps artists like Shah, and millions alongside her, will simply remove music from streaming services that don’t sufficiently reward them for clawing their way into the top 56,000 of acts worldwide.

Until then, the global scale of the “passion economy,” combined with its participants’ desperation to be noticed, will keep the money rolling for tech companies and their backers. And those backers are very happy: Take as an example investment house Tiger Global, which was one of the biggest investors in Spotify before cashing in most of its stake in 2019 for $1.3 billion-plus. Tiger Global just led the $155 million investment round that gave Patreon its $4 billion valuation.

In the same video announcing that funding round, Conte says: “There are podcasters on Patreon making millions of dollars a year. There are YouTubers on Patreon making hundreds of thousands of dollars per month.” These individuals, he assures us, are “living the freakin’ dream!” On the others — the creators struggling to keep the wolves from the door, which, in the case of Spotify’s musicians, amounts to some 99.8 percent of people — he is much quieter.

Tim Ingham is the founder and publisher of Music Business Worldwide, which has serviced the global industry with news, analysis, and jobs since 2015. He writes a regular column for Rolling Stone.