First off, Apple says, this isn’t an awards show. It’s not a concert, either; it’s much more than “just a concert,” much different from “anything you’ve ever seen before,” much less possible to describe. For one evening, the tech company has turned its campus into a public music venue to fête 17-year-old pop renegade Billie Eilish for winning three of the five accolades of its first-ever Apple Music Awards, and it wants the world to know how out of the ordinary this night is.

Eilish, whose star power has rocketed up in the past year to the point of becoming the youngest artist ever nominated for the Grammy Awards’ top four categories, was announced at the start of the week as Apple Music’s selection for Global Artist of the Year and two other awards based on a combination of streaming data and editorial curation. (The awards honor artists who’ve “sparked deep social conversation, influenced culture and inspired our customers around the world,” Apple Music head Oliver Schusser explained; other winners included Lizzo and Lil Nas X.) Eilish gave away a number of tickets for her not-concert-not-awards-ceremony at Apple’s glassy Bay Area headquarters via fan lottery, and the rest are reserved for two dozen journalists from as far away as Australia and China.

Our four-hour prelude to the Wednesday evening performance comprises on-campus media briefings on the suite of Apple Music features, as well as a presentation dedicated to the trophies themselves — custom-designed plaques made from glass, anodized aluminum, silicon wafers that power Apple’s phones, and copper plates etched with ultraviolet lithography — which Apple’s team says involved the work of departments all across the company and took months to design and manufacture. Each award, like some sort of excessively expensive, large, and unusable iPhone, comes with its own custom box and mounting plate. The intent is to give the physical award the same treatment that Apple affords any of its consumer products, though the company declines to share the plaques’ monetary value.

Eilish herself seems amused by the extravagance when she steps onto the set at the Steve Jobs Theater for the public portion of the evening to talk with Apple’s Beats 1 host Zane Lowe before her performance. For the single day, Apple has turned its usually minimalist theater — an underground venue set off to the side of Apple Park’s main spaceship/building, usually used for the company’s quarterly live-streamed product launches — into a mirrored forest, strategically placing reflective panels alongside the cascade of onstage trees so as to give the illusion of an infinite stage.

“What’s changed for you the most?” Lowe asks, pointing out that the singer has gone from living out of motels on tours with her mother to becoming a chart-topping, cross-generational household name. “Well, the most satisfying thing is having people trust me now,” Eilish says. “It’s weird because people do not trust teenagers and kids, but I was this 14-year-old girl who knew what I wanted. It took a while for me to be like: ‘This is what I want. Listen to me.'” Also, at the start of the year, she says, she was “probably the most depressed I’d ever been” — but a few weeks ago, she decided to “wake up” and take on a different perspective. “You kind of tell yourself to see things and to not see things,” she says. “I was pretty clinically depressed for a couple of years, but I was patient with myself and my surroundings.”

We’re escorted across the grounds afterwards for dinner at Apple’s cafeteria — another glass-and-light-wood space that incidentally also has trees growing out of it — before crossing back over to the Steve Jobs theater for the main event: an acoustic set performed by Eilish and her brother and co-writer Finneas. The pair offer bare-bones renditions of Eilish’s hit songs such as “Xanny,” “Ocean Eyes,” “Bad Guy” and “Wish You Were Gay,” all of which sound oddly unfamiliar when stripped of their beats and sound effects. A polite audience of fans and employees sit, stand, and wave a sea of phone lighters at Eilish’s command; two American Sign Language interpreters swap in and out of a spot near the stage to sign every single lyric. An enormous spotlight roves its light around into the seats, momentarily blinding specific portions of the audience at any given time. “I’ve never done this before,” Eilish says. “It’s cute.”

Lowe comes onstage after her set to present her and Finneas with the plaques, which befuddle both musicians with their lack of easy hand grips. Eilish kneels down and crawls to hug the fans in the first few rows of the theater before sending them off into the night. The presentation comes at the same time that all the journalists in the media section begin receiving messages about an article detailing a $25 million documentary deal between Eilish and Apple TV+, which Apple declines to comment upon.

The last 22 minutes of the hour-and-a-half show are a recorded video of Eilish and Finneas writing the track “I Love You” — broadcast not via the Steve Jobs Theater main stage but in a separate cavernous room just outside of it, replete with a much-larger-than-life sculpture of the mattress in Eilish’s bedroom. Where will the bus-sized bed, and the dozens of stage trees for that matter, go after this evening? Nobody I ask at Apple seems to actually know the answer. (Update, Dec. 6th: I’m told the trees and the metal bedframe will be recycled.)

So the live-streamed-for-subscribers show turns out to be, in spite of all of Apple’s insistences, an ordinary concert — albeit one dressed to the nines and coaxed into existence with a budget that most regular concert promoters couldn’t justify for a one-night event. In some ways it’s the culmination of months, or even years, of Apple’s relationship with Eilish’s team: Apple Music named Eilish its “Up Next” artist in 2017 and has been steadily ramping up its promotion of her music in its playlists, especially after she dropped her album When We All Fall Asleep, Where Do We Go? earlier this year.

In other ways, it’s a solid strategy play for Apple Music, which is signaling to its 60 million subscribers that they can likely expect access to other, similar exclusive events down the line; the music-streaming service has yet to catch up with industry leader Spotify, after all, and the two companies are increasingly announcing new projects and features with the aim of distinguishing their content. (Apple’s last live music play was its iTunes Festival, which featured Britney Spears and Elton John, but that event was discontinued in 2017.)

“If it’s not a concert and not an awards show, how should we describe it?” a journalist sitting besides me asks the Apple team. (The reply: “It’s like nothing you’ve ever seen before.”) Yet in another way, the Eilish-Apple extravaganza is a quaint, intimate, eclectic one-off passion project for a trillion-dollar business with cash to burn. 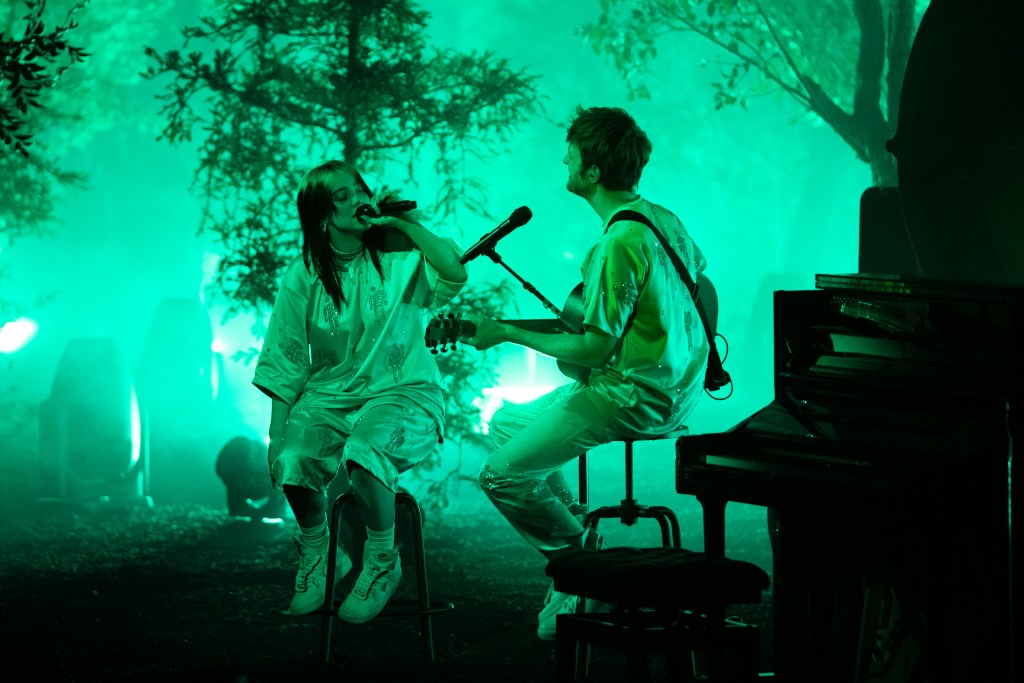