BERLIN — For three nights this week, the Arena Berlin, a concert venue in the German capital’s Treptow district, has been coming to life with strobing spotlights, thumping bass beats, and hundreds of boisterous Berliners. These are the first gatherings of their kind in the city since a year and a half ago, when Covid-19 swept the globe and forced live venue closures all over. The events this week were neither unsanctioned parties nor wannabe back-to-normal concerts — but rather government-approved raves that doubled as mass vaccination sites, meant to motivate young citizens to get the shot.

Like Krispy Kreme doughnut incentives in the United States or bratwurst elsewhere in Germany, the vaccination raves, dubbed “long nights of vaccination,” came out of conversations between event organizers about what might make people show up for the jab. “In Berlin, it’s techno,” Midas 104, an artist who performed at the arena on Wednesday night, tells Rolling Stone. “The event is a chance to reach out to younger people in a more creative way than the dusty German government campaign,” says Jacob Groening, one of the artists slated to perform at the final vaccination night event tonight (August 13th), who says joining the lineup was a no-brainer.

The Best Face Masks for the Delta Variant

Arena Berlin was first converted into a vaccination center earlier this year, as vaccines became widely available in Germany. This week, a stage was brought in. The observation area where people were asked to wait at least 15 minutes after their jab was transformed into a socially distanced dancefloor. During the “long nights of vaccination,” any unvaccinated person over the age of 16 has been encouraged show up as late as 1 a.m. and get their first dose of the Pfizer-BioNTech vaccine and an appointment for the second while enjoying music, snacks, and non-alcoholic drinks, all free of charge.

Because Berlin’s vaccination nights are not requiring appointments, health insurance, or personal identification, they are providing a barrier-free way for many to access the Covid-19 vaccine. “The goal was to create a low threshold event where everybody can get vaccinated,” says Anna Harnes, a member of the Berlin Club Commission and chair of the executive board at United We Stream, the promoters behind the event. “There was a large amount of people desperately in need of vaccination, who just had the hurdle of [not having the right paperwork],” she says.

Some artists across the globe have been hesitant to go back into live events yet — but for the ones participating in Berlin’s week, like Frinda di Lanco, who performed on Monday night, knowing the event’s mission to incentivize Covid-19 vaccines made it easy to get on board. “I can only support an event like this,” she says, “that helps people who otherwise don’t have a chance to get the vaccine.”

Inspiration for Berlin’s vaccination nights came from artists and creators, many of whom sought jobs at vaccination centers after the pandemic forced them out of their regular line of work. According to a lead organizer at the Arena Vaccination Center, more than 75 percent of the center’s employees come from Berlin’s cultural scene. Work in local vaccination centers has provided a steady income for many creators and unexpected opportunities to reunite with friends and experience a different side of Berlin’s club scene. (And many other live event workers across Europe have done the same, in the year-long vacuum of concerts.)

Drag queen and DJ Gloria Viagra says she feels like something was stolen from her when coronavirus safety restrictions forced club closures. “I realized that I really lost something,” she says. Viagra began working at one of Berlin’s vaccination centers in February, and she says that reconnecting with other members of the club scene there has been emotional.

For Midas 104, meeting people he knew from local nightlife in their new roles has shown him “that the personalities I’ve met [in Berlin’s club scene] are really cool, and not only under neon lights.”

Both Viagra and Frinda di Lanco say they’ve gotten to flex the same skills that made them successful in the entertainment world in their new jobs. “We do this all our lives,” says Viagra. “We deal with so many different kinds of people, and so we are the perfect people to work at the vaccination centers.” This week, when the daylight world of the vaccination center and the after-hours world of pre-pandemic Berlin club life collided, it was “kind of the strangest gig,” says Midas 104. “It was weird to see the vaccination center during the night, but also exciting — really something for the books.” 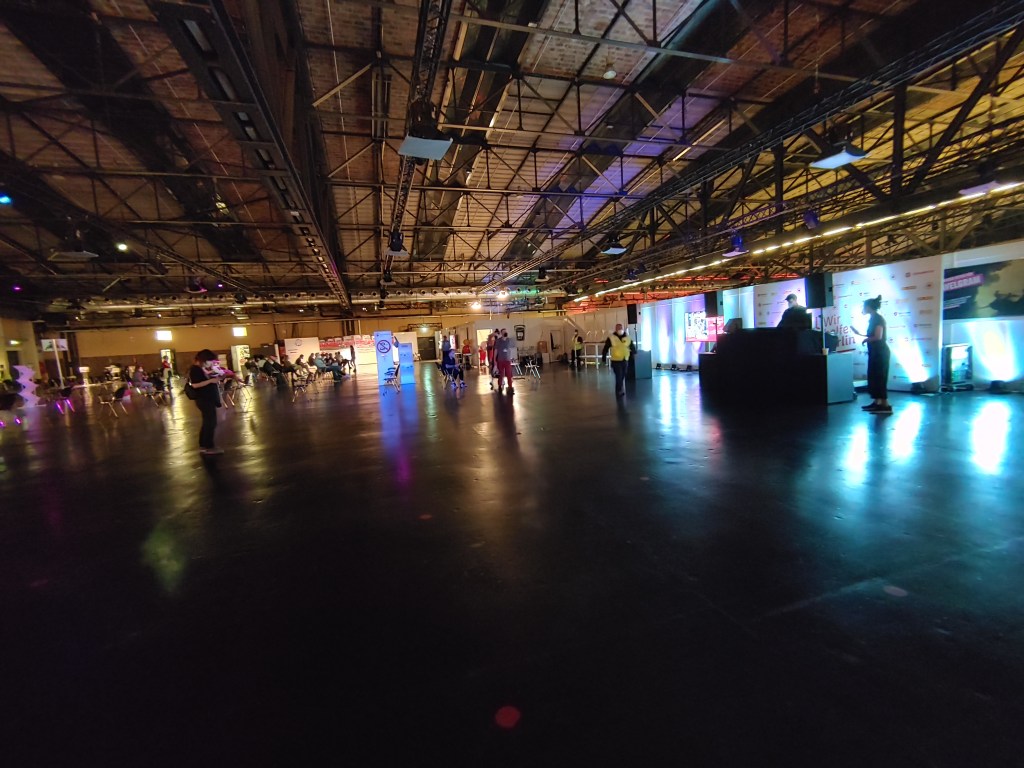 One of the “long nights of vaccination” in Berlin in August 2021.

Henning Baer, the resident DJ of Grounded Theory, has been a team leader at the Arena Vaccination Center since December 2020. He says that this week’s events were “a beautiful contrast to the regular opening hours.” “Playing music in there was surreal,” he says. Speaking ahead of her Friday night performance, Viagra said she expects the vibe in the arena to feel like a “big family” when she performs.

While the inspiration came from the artists, the main organizers behind the vaccination nights were the Berlin Senate, German Red Cross, the Berlin Club Commission, and United We Stream. Their work fits into a nationwide effort to increase vaccination rates as summer winds down. According to the German Minister of Health Jens Spahn, 47 million people in Germany, or about 57 percent of the population, have been fully vaccinated. About 52 million people, or 63 percent of the population, have received at least a first dose. But, according to the Robert Koch Institute, Germany’s public-health authority, 20- to 24-year-olds are getting infections at twice the national average, making young people a critical target group for vaccinations.

Turnout at the event was what one might expect from a lineup packed with some of Berlin’s hottest artists, albeit under pandemic-era restrictions. On Monday night, more than 400 people came out, some waiting as long as three hours in a queue that stretched outside the building in the rain. On Wednesday, 600 people turned up, and organizers expect Friday’s turnout to be the largest yet. As people return for their second doses, the number of vaccines administered due to the event will double. By comparison, according to the German Red Cross, the Arena Vaccination Center administers about 2,000 vaccine doses on a regular day.

The team behind Berlin’s vaccination nights also wanted to “support club culture,” Harnes says, “because without higher vaccination rates, it will be very difficult to open up the clubs again.” And Berlin’s mayor Michael Mueller told Bloomberg: “Of course we want to reopen our clubs. The reopening will continue, with more possibilities, but always under the condition that we see the vaccination program proceed.”

Midas 104 says his work in the vaccination center and this week’s vaccination raves have given him renewed hope. “It’s the first feeling I’ve had, since one year, that the club culture somehow goes on, that it will come together again somehow,” he says.

Marianne Dhenin is a freelance writer covering social and environmental justice and politics.