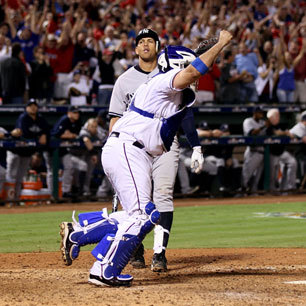 So I’m on NYYfans.com this morning, the big Yankees fan site, just checking to see exactly how long it would take for Yankee fans to treat the gushing wound of last night’s playoff loss by laying claim to every available 2011 free agent, in particular Rangers ace Cliff Lee. In other cities fans would hesitate for at least a day or two before fantasizing about buying the player who just whipped their asses in the playoffs. But in Yankee-land there is genuine irritation that the Rangers this playoff season were somehow allowed to use Lee, a player who by fate and divine birthright already belongs to Yankee fans thanks to the inevitable $150 million contract he will collect from the Steinbrenners this winter, to deprive the Yankees of their annual World Series title.
Anyway, a “2010-2011 Official Offseason Thread” on this site begins as follows, with a post by somebody named k_ant:

So you know how everyone outside Miami is rooting against Lebron James, Dwayne Wade and Chris Bosh? And not just rooting against them, but perhaps even praying to God that they all rupture their labrums in a celebratory chest bump on opening night? That’s because the Lebron-Wade-Bosh thing is a once-in-a-generation violation of sports etiquette. In street basketball games, the next five guys in line are supposed to play the next game — and if that means you get stuck with a couple of scrubs, so be it. But every neighborhood has one group of five local bullies who are all awesome ballplayers who sort of hang around away from the court, and then don’t show up in line until things are arranged so that they can play together. They won’t play if they can’t all play at the same time; they don’t want to deal with having to guard each other. So they go on the court and they kick ass all afternoon, throwing alley-oops to each other, dunking on fat stockbrokers and other assorted losers and generally having a great time.
None of those guys ever go on to play in big schools or anything, because good players who’d rather beat up scrubs all day long than compete against each other probably have no heart (which explains the seemingly inexplicable losses these pickup Dream Teams occasionally rack up against homeless dudes and goofy white guys with headbands). And what Lebron and D-Wade and Bosh did was basically an NBA version of this phenomenon, which is why everyone is rooting against them with once-in-a-lifetime fervor as this NBA season starts.

So that’s happened once in the whole history of the NBA (maybe twice, if you count the KG-Ray-Pierce trio). But in baseball, it happens every single year. Every Yankee team is that squad of pickup ball ringers. Yankee fan after a playoff loss: Unacceptable! Now we have to get Lebron! At minimum!
(“Cliff Lee is a
must
” says “Sherwin43”) . The sheer panic in the hearts of Yankee fans at the prospect of not getting more ringers to load up for another anti-competitive run at the title is, in this wake of this Rangers loss, at a level that almost brings tears to my eyes. This is an actual post from “4degrees”:

there is about $140M commited next year with no Andy, Mo, or Jeter. You also have to come up with a bench (6 position players). Phil, Joba, Ace, Pena, and Cervelli will all get raises. Say all of them combined pull down $10M.

The Yankees will probably want to stay within their $220M budget limit.

So now you’re looking at $207M, there’s no Andy, and you have no bench. Something has to give.

In other words, even if we stack the deck with the two dominant lefty starters in the game (in Lee and Sabathia) and spend $207 million (or about $60 million more than any other team) fielding a team of all-stars, that will leave us poor Yankee fans with only $13 million to pay for a bench and a 5th starter! How will we ever manage?!
Sorry, I know this isn’t exactly critically important to mankind, but it’s Saturday morning and this is just too funny. Disclaimer: I’m from Boston, and yes, many Red Sox fans would be just as bad, if they were in this position. In fact, some of this same behavior in Red Sox Nation (re-sign Beltre and Victah! Trade Jed Lowrie for Adrian Gonzalez straight up!) is making me seriously consider a conversion to Tampa Bay-ism. But as bad as Red Sox fans are, they can’t even touch this Yankee thing. I almost think humanity should take up a collection to help the Orioles or the Blue Jays (definitely the Blue Jays, their fans are so polite, that would be perfect) sign Lee. Ok, back to real life now…