Residents of Flint, Michigan, have been poisoned by the incompetence of the state government.

Thousands of children in the city have been exposed to toxic levels of lead from corrosive drinking water flowing through aging pipes. Levels of the heavy metal measured in city drinking water at the height of the crisis rose above the threshold for “hazardous waste.” Months later, lead levels remain dangerously high.

Both the state and federal government have now declared a state of emergency for the city. President Obama has called the foot-dragging by state authorities responding to this crisis “inexplicable and inexcusable.” Michigan’s Republican governor has apologized, telling Flint, “I’m sorry and I will fix it.”

Much of the damage, however, isn’t fixable. Lead poisoning is known to impair cognitive function, shorten attention spans and spur antisocial behavior. The World Health Organization says the “neurological and behavioral effects of lead are believed to be irreversible.”

This is a tragic story of austerity and indifference that will haunt the people of Flint for decades to come.

Here’s what you need to know.

Where is this happening?
Flint is about 65 miles north of Detroit. Once the primary manufacturing center for GM’s Chevrolet and Buick lines, the city is now a poster child for post-industrial decay, immortalized by native son Michael Moore in the 1989 documentary Roger & Me. Today, Flint is an extremely poor, predominantly African-American city of nearly 100,000 residents.

Why did the water suddenly turn toxic?
The city of Flint had long relied on Detroit’s water authority — one of the nation’s largest — for its drinking water. As an austerity measure, the city began pulling water out of the Flint River in April 2014.

Who made that call?
The state of Michigan. Back in 2011, Flint was so broke it was taken into state receivership. Republican Gov. Rick Snyder — a certified public accountant and former Gateway computer chairman who campaigned for office as “one tough nerd” — tapped a revolving cast of “emergency managers” to govern the city and cut costs.

In 2013, one of Snyder’s managers decided Flint should end its reliance on Detroit’s drinking water and join a new water district. The only problem? The pipeline to deliver water to Flint wasn’t built yet.

Rather than broker a stop-gap water contract with Detroit, the emergency manager signed an order to pump water out of the Flint River, because, hey, free water. The move was expected to save about $1 million a year.

Flint River water?
It’s about as delicious as it sounds. The Detroit water system had provided Flint with fresh water pumped from the depths of Lake Huron. By contrast, the Flint River is tainted by farm runoff, sewage and decades of industrial effluent.

When did the water quality problems start?
Almost immediately. Flint residents began complaining about discolored water they said was making them sick; by August 2014, E. coli pollution in the water led to on-again, off-again warnings to residents to boil their water.

Was the city not treating the water?
They were. But Flint River water is difficult to sanitize because it contains high levels of chloride. Chloride is corrosive to iron. Corroding iron, in turn, consumes chlorine — defeating the pathogen-killer that is added to drinking water to make it safe. Experts write that the corrosive quality of Flint River water makes it “very difficult to meet Federal standards for minimum chlorine levels no matter what is done” to treat it.

But where did the lead come from?
The water coming out of the Flint River isn’t tainted with lead. But its corrosive quality leaches lead out of the city’s aging plumbing. By one measure, Flint River water is 12 times as corrosive to lead as the water that came from Detroit. There are lead pipes throughout the system, most often service lines connecting homes to the the city’s water mains. And in most homes built before the mid-1980s, the copper water pipes were fused with lead solder.

Were there red flags early on?
Yes. General Motors still has manufacturing facilities in Flint. In October 2014, worried the water would corrode auto parts, the company brokered a deal to switch its own water supply back to Lake Huron water.

Hold up. The water quality wasn’t good enough for industrial purposes, but people were still drinking it? And no one was advocating a switch back to Detroit water?
In fact, city council members in Flint appealed to the emergency manager to switch back to Detroit water way back in January 2015. Detroit even offered to waive re-connection fees. The request was denied; it would cost too much.

When was the lead problem discovered?
The University of Michigan-Flint found high lead levels on campus in January 2015.

By February, the first home in Flint tested positive for elevated lead levels — at nearly seven times the EPA’s limit.

Are Flint city employees blameless here?
The crisis began under state rule but played out under local control; Flint exited state receivership in April 2015. However, a state task force has laid “primary responsibility for what happened in Flint” at the feet of Michigan’s Department of Environmental Quality, or MDEQ.

Was the EPA asleep at the switch?
Not entirely. By February 2015, the EPA was interrogating MDEQ, asking if corrosion controls were in place in Flint’s water system. The state told the EPA that it had a corrosion plan in place. But this wasn’t true. Lime was being added to “soften” the water. State officials seemed to believe this would make the water less corrosive. In fact, it may have made it more so.

By early summer, the EPA had a good handle on the problem. One employee sounded the alarm in a memo dated June 24, 2015: “A major concern from a public health standpoint is the absence of corrosion control treatment,” he wrote. “Recent drinking water sample results indicate the presence of high lead results in the drinking water…. The lack of any mitigating treatment for lead is of serious concern for residents that live in homes with lead service lines… which are common throughout the City of Flint.”

In July, the state of Michigan nonetheless advised Flint residents not to worry: “Anyone who is concerned about lead in the drinking water in Flint can relax,” MDEQ’s then-spokesman said. “It does not look like there is any broad problem with the water supply freeing up lead as it goes to homes.”

How did the reality of the tainted water break through official denial?
Independent researchers from Virginia Tech arrived to test Flint’s water. Their findings, from hundreds of samples, found widespread lead contamination. There is no safe level for lead in the water, but the EPA puts a limit at 15 parts per billion. It classifies water tainted above 5,000 ppb as hazardous waste. Virginia Tech researchers found samples with lead contamination as high as 13,200 ppb. The researcher’s bottom line, released in late August: “FLINT HAS A VERY SERIOUS LEAD IN WATER PROBLEM.”

The denials by state officials finally faded in September 2015, after a doctor testing children’s blood in Flint revealed that the rate of observed lead poisoning had nearly doubled. 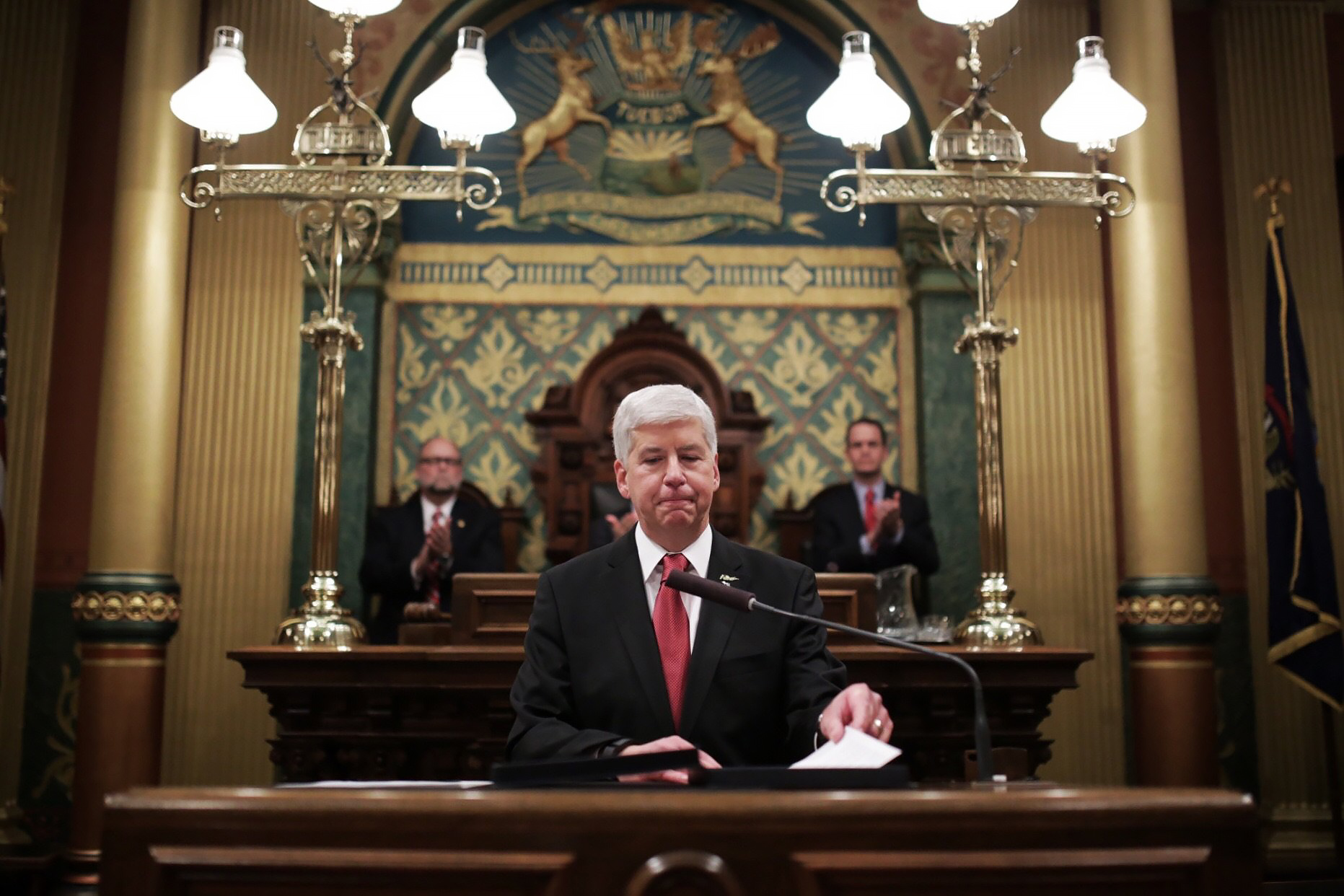 But wasn’t the water supply switched back months ago? Why is this still a crisis?
Indeed, in early October 2015, Gov. Snyder made the call to switch Flint’s water back to Detroit’s system at a cost of $12 million, much of it paid for by the state. Flint residents were offered water filters by the county.

But the lead levels are still too high. In December 2015, citing “lead levels [that] remain well above the federal action level of 15 parts per billion in many homes,” Flint’s new mayor declared a state of emergency.

As the Department of Justice began to investigate the crisis in early January, Gov. Snyder issued an emergency declaration at the state level. He called in the National Guard to begin distributing bottled water.

On January 16, the White House declared a federal state of emergency in Michigan and will provide “water, water filters, water filter cartridges, water test kits, and other necessary related items.”

How many kids have been affected?
State health officials say that every child under six in Flint should now be considered lead-exposed. Census data suggests that’s close to 9,000 children.

When will Flint’s water be safe to drink again?
Nobody knows.