Why Students Are Marching for Better Wages - Rolling Stone
×
×

On Wednesday, April 15th, tens of thousands of workers from low-wage industries including fast food, retail, child care and home care protested in over 200 cities and 35 countries to demand two things: a living wage of $15 per hour (up from the current federal minimum wage of $7.25) and a union. The protests built on the momentum that started in November 2012, when fast-food workers in New York City staged their industry’s largest strike. Backed by the Service Employees International Union, the Fight for $15 campaign has since expanded to sectors beyond fast food, although McDonald’s remains a major target.

Among the protesters rallying this week were students at more than 200 college campuses across the country. In New York, undergrads, high schoolers, grad students, adjunct professors and campus workers from around the city gathered at Columbia University to discuss their experiences in low-wage industries and the need for better wages and working conditions. Some drew connections between economic justice and movements including Black Lives Matter, environmental justice and improving resources for sexual violence survivors. A few participants held a long banner with a black prohibition sign covering Ronald McDonald’s image. Below the drawing, the banner read, “FIGHT FOR $15.” Above it, “STUDENTS ARE NOT LOVIN IT.”

For many students, raising the minimum wage is more than an abstract political issue. Some students work low-wage jobs to help pay tuition or cover their living expenses; others might do so after graduation, when they will have an average of almost $30,000 in student loan debt. In 2013, 260,000 people with a bachelor’s degree earned $7.25 an hour, according to the Bureau of Labor Statistics. These numbers illustrate why the idea of higher education as a path to secure employment is now a myth.

Student involvement with Fight for $15 highlights the precarious financial situation facing young people. “It’s important that we recognize how valuable our time is and that we shouldn’t have to make decisions between textbooks and food, or going to class and going to work,” says Jada Young, a Columbia University sophomore and former Subway restaurant worker. 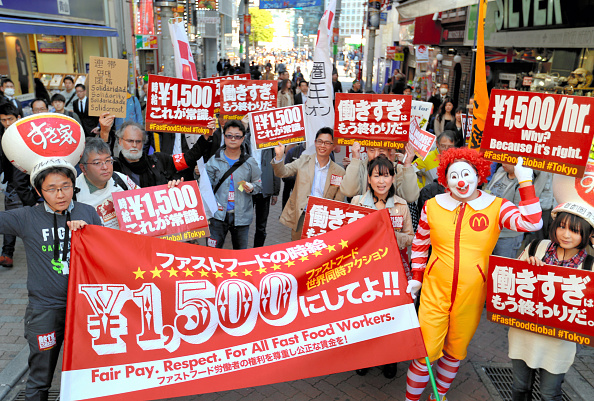 Jessica Davis, a 26-year-old mother, Northeastern Illinois University student, and McDonald’s worker in Chicago, says that making $15 an hour would help her stay on top of her loans. At one point, she had to take a leave of absence from school because she couldn’t pay. Davis argues that higher-paying jobs are not an option if you need to balance school with work: “A lot of people don’t have the privilege of just going to class. They actually have to help pay for their own education. And jobs like fast food and retail are flexible in a sense where they’ll work around your school schedule.”

Davis’s situation is not unique. When Tim Roach, a 21-year-old Wendy’s employee in Milwaukee, couldn’t pay tuition for the culinary arts program at Milwaukee Area Technical School, he took a break to work full-time and try to pay off some of his student loans. “We have to go in debt, basically, to earn a living wage,” he says of the difficulty of paying one’s way through college with a minimum-wage job in the hope of one day getting a better job. Roach has yet to return to school.

The recent student protests reveal a logical alliance between students and low-wage workers. But the majority of the students who marched this week understand that this issue impacts everyone, not only students who are current or future low-wage workers. Dhruv Pathak, a junior at the University of North Carolina at Greensboro who earned minimum wage at a grocery store and is now an organizer with United Students Against Sweatshops, a national student-labor solidarity organization involved with Fight for $15, says that the focus currently is – and should be – on workers. And yet, he recognizes the necessity of student action. “Soon it’s going to be students who are going to be the ones organizing themselves around $15 and the right to form a union,” he says, “because it’s almost an inevitable future unless we can change stuff right now.”