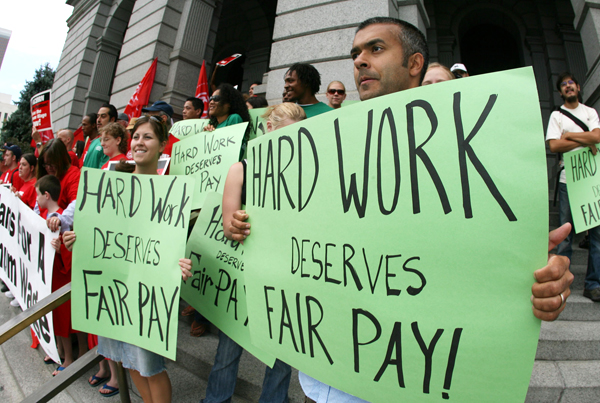 When it comes to the economy, one clear distinction between the candidates is “who are you really fighting for?”

I mean, they all say they’re fighting for the middle class – they know they can’t win without them – but for decades now, conservative doctrine is that you help the middle by bequeathing deep goody bags to the top – it’s called “trickle down,” and, as we saw quite clearly in the George W. Bush years, it doesn’t work.

Well, here’s something that does work: the national minimum wage.  By definition, the minimum wage sets a nationwide floor on the low end of the job market, though to their credit, many states now set their minimums above the federal level of $7.25 (Washington state, the highest in the nation, clocks in at a cool $9.04).  So it’s a floor, not a ceiling.

Lots of low-wage workers and their families depend on it, and its long slide, as shown in the figure below, especially over the Reagan years, led to wage losses and working poverty for many who toil to this day in low-end services (think: cashiers, food prep workers, retail salespeople, child care providers).

Of course, when someone proposes an increase, you hear a huge outcry from folks in groups like the Chamber of Commerce and from lobbyists for the big retailers. Their basic argument is that the increase will lead to job losses among those low-wage workers affected by the higher wage level.  Such workers, they say, will now be “priced out of the labor market,” because employers will be less inclined to hire them at the higher cost.

Yet, you hear the opposite from groups that represent low-wage workers interests, groups like the National Employment Law Project, or NELP (proud disclosure: I’m on their board).

Now, let’s just pause here for a second.  The Washington lobby that represents employers say they’re against the increase, not because it would raise labor costs and cut into profits, but because it’s bad for the workers themselves, who will suffer reduced hours and layoffs.  But the workers groups say “Bring it on!”

Hmmm … who you gonna believe?

In fact, with all this variation among the states – and some international variation as well (the UK has seen quite sharp increases in its minimum wage since it was re-introduced in the late 1990s) – we have lots of comparative data on job loss (or not) for economists to fight over (here’s a study I worked on a few years back).

Plenty of ink has been spilled in defense and attack of the issue, but I think it’s fair to say that most objective parties come away concluding that the hysteria about job loss is overblown.  The research suggests that a higher minimum wage helps some low-wage workers, most of whom are adults (76 percent are at least twenty years old), many of whom have kids.  Some studies find small effects on employment, some none.

A much more interesting question, economically speaking, is why don’t we see the horrific scenarios that opponents scream about in the states with relatively high minimum wages?  Actually, I think I know: there are numerous channels through which the higher wage is absorbed. They include:

• Profits: To the extent that the increase is paid for out of profits, we shouldn’t expect job losses.  And in an economy where profits have dazzled while paychecks have fizzled, that ain’t a bad thing.

• Prices: Some studies find that a small bit gets passed through to higher prices.

• Productivity: To the extent that higher wages reduce turnover and vacancies, a higher minimum can partially pay for itself by squeezing out inefficiencies. It’s not wishful thinking – some studies have found just that.

• Limited range: It matters what the level you raise it to, and historically, increases have affected less than 10 percent of the workforce, often even smaller shares.  With relatively few workers in the “affected range” we wouldn’t expect to see a huge impact.

• Stimulus!  Minimum-wage workers tend to spend the extra cash, so there’s more economic activity than otherwise would occur – and by the way, even under the redistributive scenario described under “profits” above, where low-wage workers’ gains are higher income persons’ losses, you’ll get this effect if low-wage workers consume more of their last dollar than the guys in the sky boxes.

Now, here’s something you might not have known: You’ve got to partially give it up to Gov. Mitt Romney; the dude has taken significant incoming from his rivals for advocating indexing the national minimum wage, meaning adjusting it for inflation so it rises with prices and its purchasing power remains the same (a few states already do this).  It’s an excellent idea in that a) you avoid the dips in the figure below, which shows the real value of the national minimum since 1960, and b) businesses know what to expect.  I mean, after all, we index lots of stuff like this, including Social Security benefits.

Why just “partially” give it up to Mitt?  Again, look at the figure.  When we index the minimum wage, we want to be sure to do so at a level that can better support low-income workers. Romney’s comments on the subject imply he’d leave the wage at its current level, $7.25.

So where should we set it?  I need to do more research on the question of “affected range” as noted above, but I suspect I’ll end up in the neighborhood of $9-$10, phasing it in starting a year or so down the road.

I think it could, though I don’t know when.  We’d actually want to wait for the unemployment rate to come down some more, but getting to ‘yes’ on this is going to take awhile, so we’d better get started. There was a long period of neglect during the Reagan years (1981-90), but since then the minimum wage has actually been raised by both Democrats and Republicans. At some future point there’s a minimum-wage increase out there.  The sooner we get to work on it, the sooner that future arrives.

Also by Jared Bernstein
• The Economy: What’s Wrong and How to Fix It
• How to Build a Fairer Economy
• What Obama’s State of the Union Got Right
• What the New Jobs Report Means