It’s not quite the Panama papers, but one hell of a big pile of carefully guarded secrets may soon be made public.

For years now, the federal government has been quietly fighting to keep a lid on an 11,000-document cache of government communications relating to financial policy. The sheer breadth of the effort to keep this material secret may not have a precedent in modern presidential times.

“It’s the mother of all privilege logs,” explains one lawyer connected with the case.

The Obama administration invoked executive privilege, attorney-client and deliberative process over these documents and insisted that their release would negatively impact global financial markets. But in finally unsealing some of these materials last week, a federal judge named Margaret Sweeney said the government’s sole motivation was avoiding embarrassment.

Why the Banks Should Be Broken Up

“Instead of harm to the Nation resulting from disclosure, the only ‘harm’ presented is the potential for criticism,” Sweeney wrote. “The court will not condone the misuse of a protective order as a shield to insulate public officials from criticism in the way they execute their public duties.”*

So what’s so embarrassing? Mainly, it’s a sordid history of the government’s seizure of mortgage giants Fannie Mae and Freddie Mac, also known as the government-sponsored enterprises, or GSEs.

The papers being fought over concern both past and future controversies, all of them quite complicated. At the root of all of them, however, is a fight over the assets and financial power of the currently zombified GSEs. It’s a pitched battle over the future of the American housing market, and the sealed papers likely contain a covert history of the war to date.

After 2008, everyone hated Fannie and Freddie, and for good reason. These quasi-private companies are essentially giant piles of money that were intended to advance a simple, utility-like mandate to keep credit flowing in the housing markets.

In the pre-crash years, however, the firms’ leaders acted less like the stewards of utilities and more like sleazy Wall Street hotshots. They made hyper-aggressive business decisions because their bonuses were tied to earnings growth. Some executives even engaged in Enronesque accounting manipulations in an effort to jack up their bonuses even further. These efforts led to record civil fines.

Contrary to popular belief, the one thing they weren’t guilty of was causing the 2008 crash. As the Financial Crisis Inquiry Commission later concluded, the GSEs were followers rather than leaders of the subprime craze. They invested far less recklessly than did the giant Wall Street firms primarily responsible for inflating the housing bubble.

In fact, it’s a little-known subplot of the financial crisis that bailout-era Fannie and Freddie was turned into a kind of garbage facility for other Wall Street institutions, buying up toxic mortgages that private banks were suddenly desperate to unload.

As early as March of 2008, then Treasury Secretary Hank Paulson was advocating using Fannie and Freddie to “buy more mortgage-backed securities from overburdened banks.”

And at the heat of the crisis, none other than former House Financial Services Committee chief and current Hillary Clinton booster Barney Frank praised the idea of using Fannie and Freddie to ease economic problems. “I’m not worried about Fannie and Freddie’s health,” he said. “I’m worried that they won’t do enough to help out the economy.”

Even after the state took over the companies in September of 2008, Fannie and Freddie continued to buy as much as $40 billion in bad assets per month from the private sector. Fannie and Freddie weren’t just bailed out, they were themselves a bailout, used to sponge up the sins of private firms.

The original takeover mechanism was a $110 billion bailout, followed by a move to place Fannie and Freddie in conservatorship. In exchange, the state received an 80 percent stake and the promise of a future dividend. All told, the government ended up pumping about $187 billion into the companies.

But now here’s the strange part. Within a few years after the crash, the housing markets improved significantly, to the point where Fannie and Freddie started to make money again. Lots of money. The GSEs became cash cows again, and in 2012 the government unilaterally changed the terms of the bailout.

Now, instead of taking a 10 percent dividend, the government decided that the new number it preferred was 100 percent. The GSE regulator, the Federal Housing Finance Agency (FHFA), explained the new arrangement.

“The 10 percent fixed-rate dividend was replaced with a variable structure, essentially directing all net income to the Treasury,” the FHFA wrote. “Replacing the current fixed dividend in the agreements with a variable dividend based on net worth helps ensure stability [and] fully captures financial benefits for taxpayers.” 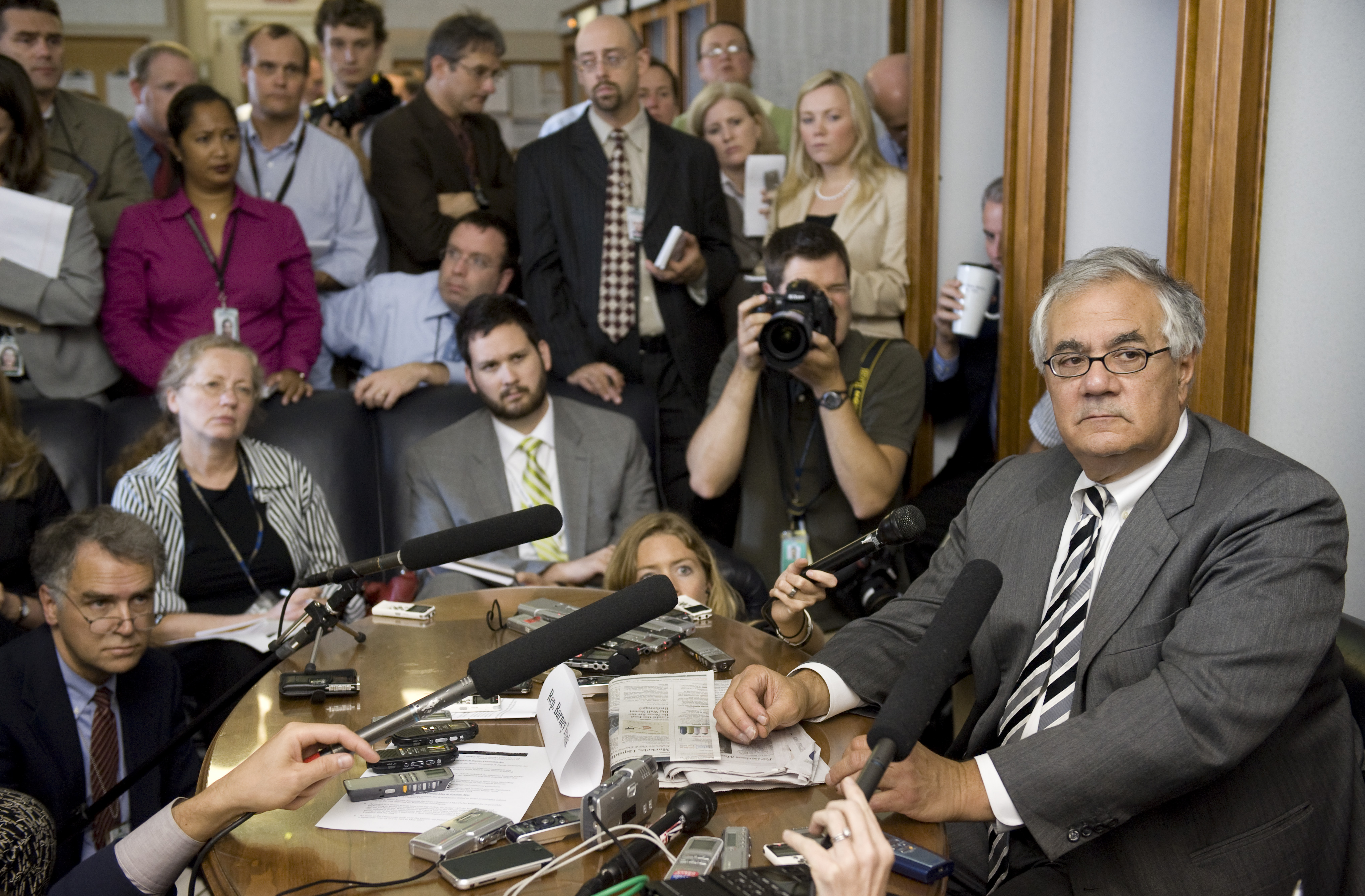 Translation: We’re taking all your money, not just the money you owe.

In court filings later on, the government offered a strange excuse for this sudden and dramatic change in the bailout terms. It explained that at the time, the GSEs “faced enormous credit losses” and “found themselves in a death spiral.”

The government claimed that the poor financial condition of the GSEs would force the Treasury to throw more money at the operations, increasing the total commitment of taxpayers and leading quickly to insolvency. It absolutely denied any foreknowledge that the firms were on the verge of massive profitability.

It got weirder. Despite the fact that the GSEs went on to pay the government $228 billion over the next three years, or $40 billion more than they owed, none of that money went to paying off Fannie and Freddie’s debt. When Sen. Chuck Grassley asked aloud how it was that the company and its shareholders were not yet square with the government, the Treasury Department testily answered, in essence, that the bailout had not been a loan, but an investment.

This was not a debt that could be paid back. Like a restaurant owner who borrows money from a mobster, the GSEs found themselves in an unseverable relationship.

Remember, the other bailout recipients after 2008 were mostly all allowed to pay off their debts as quickly as possible, to get out from under restrictions imposed upon them by the government. Firms that took bailout money were allowed to pay far earlier than expected, in less than a year in some cases, allowing companies like JP Morgan Chase, Goldman Sachs and Morgan Stanley to get out from under executive compensation restrictions and other temporary reforms.

Not Fannie and Freddie. The much-loathed mortgage giants were kept in a perpetual coma, neither fully alive nor dead, and forcibly converted into a highly lucrative, and highly irregular, revenue source for the federal government.

All of this behavior prompted a series of lawsuits. Shareholders in Fannie and Freddie were naturally more than a little pissed at having the government permanently forestall any chance they might have at ever having their investments in the company pay off.

In the discovery battle in these suits, the government’s pleas for secrecy were so extreme that it asked for, and received, “attorneys’ eyes only” status for the documents in question. This meant that not even the plaintiffs were entitled to see the raw papers. This designation is usually reserved for cases involving national security or proprietary business secrets.

But there were no nuclear codes or plans for next-generation cell phone technology here. Instead, it was just a very strange history of government officials expropriating a monster pile of cash from a pair of political-albatross mortgage companies.

Why the extreme secrecy? The seven documents unsealed by Judge Sweeney last week offer only a hint of a reason. The materials are definitely embarrassing. Among other things, they demonstrate that not only did the government know the GSEs weren’t in a “death spiral,” it was actually quite confident in their future profitability well before it changed the bailout terms. Then and now, government officials lied about what they were doing, and why.

But there might be more to this story. Likely also buried in the still-sealed documents is a wealth of information about the government’s plans for future reorganization of Fannie and Freddie, a huge looming event in the history of American finance.

Many of the government officials who were involved in the decisions surrounding the GSE conservatorship are now in the private sector, working on proposals for much-anticipated GSE reform.

Without getting too deeply into the weeds of this even more complicated tale, government officials have been working with Wall Street lobbyists for years on a plan to have a consortium of private banking interests step into the shoes of Fannie and Freddie.

If this concept actually goes through, it would be the unlikeliest of coups for Wall Street. Having nearly triggered a global depression eight years ago, the usual-suspect, too-big-to-fail banks would essentially be put in control of the same housing markets they all but wrecked last time around.

This would be a nonstarter politically, the ultimate public-relations disaster, were it not for the fact that Fannie and Freddie are about the only companies on earth less popular than the Wall Street banks. Still, replacing the one with the other would be madness by any objective standard.

Are the gory details of that plan what the government is working so hard to keep under seal?

We may never know. Judge Sweeney has yet to rule on the vast majority of the documents, and there’s no guarantee that she will ultimately unseal the remainder of the material. We may never find out what the government was so keen on keeping secret.

The only thing that is clear is that there’s something odd going on, with the Obama administration asserting privilege over a volume of papers so large, it would make Nixon blush.

“I’ve been doing this for 20 years, and I’ve never seen anything like it,” says David Thompson of Cooper and Kirk, one of the attorneys fighting to unseal the material.

This is exactly the sort of story that tends to fly under the radar in the American media. It’s complicated and full of numbers and faceless officials and executives. There is little hope that even the most salacious series of Treasury documents can out-duel Donald Trump or the Bern-Hillary showdown for airtime. But whatever this is, it matters and we’d better keep an eye on it.

*Update: Ironically, one of the very first memoranda Barack Obama wrote as president was about the Freedom of Information Act, and contained language very similar to Judge Sweeney’s. “The Government should not keep information confidential merely because public officials might be embarrassed by disclosure, because errors and failures might be revealed, or because of speculative or abstract fears.” (Hat-tip to analyst Josh Rosner for pointing this out.)