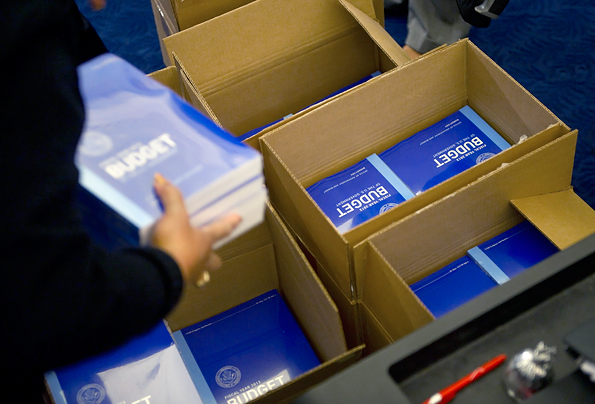 The chin music is in full chorus re the president’s budget release: It’s a political document!  It’s campaign rhetoric!  It’s dead on arrival!  It fails to tackle [fill in your favorite problem]!

In fact, it’s a smart piece of work.  Just put aside the incredulity – and the fact that, no, it it’s not going to be enacted (more on that below) – and let’s step back and look at this thing.

This budget is a balancing act, in a couple of different ways.  It balances both stimulus and deficit reduction, and it balances tax increases and spending cuts.  All four of those are needed.

In the short term, we need more stimulus.  The recovery is unquestionably picking up, but it’s far from off to the races.  The president’s budget invests in infrastructure, including fixing schools along with the more traditional stuff, like roads and railways. Importantly, there’s relief for states in the form of preserving jobs for teachers, police, and other state workers.  Remember, states have to balance their budgets, and that means when they’re strapped, like they are now, they cut public services and public servants.

And yes, I admit it: that means spending and a larger budget deficit.  But given the still weak economy – the private sector is not fully up and running – the question right now isn’t “how much do you reduce the deficit this year?”  It’s “are we doing enough to help boost the fledgling recovery?”

Of course, once we’re back on track, economy-wise, that’s when we need to bring down the deficit, and the president’s budget does that, with over $4 trillion in spending cuts and tax increases.  Spending cuts account for 60% of the savings, tax increases for the other 40%.

That, of course, is where you hit the partisan wall, especially given that the $1.5 trillion in new tax revenues come exclusively from the 3% of households with incomes above $250,000.  And to tell you the truth, I get the difficulty some people have with that.  Ultimately, it won’t make sense to restrict tax policy like this, based in part on a campaign pledge made by the President years ago.

But for now, the middle class remains squeezed by the slog out of the great recession, while corporate profitability is soaring and corporate tax liabilities are very low.  Some gazillionaires with asset-based incomes really are paying 15% tax rates while people with paychecks pay twice that rate.  So it’s fair for the president to start by adding some progressivity back into the code.

For the record, I don’t love all the spending cuts—I think the budget cuts too deeply into so-called domestic discretionary spending, things like help paying for heating oil for low-income households, job training, Head Start—the sort of things you’d want to expand in an economy with too much inequality and too little mobility.  Also, I don’t like the $50 billion in cuts to Medicaid, which can’t really spare a dollar as far as I can tell, without hurting poor beneficiaries.

Back to reality: when partisans say this budget is DOA, they mean it.  Clearly, the president did not craft this document with an eye to what Republicans would agree to.  Why would he?  Some of their most influential members have made it clear they won’t agree to anything he proposes; others have pledged to never, ever raise a tax.

But that doesn’t render this document meaningless—not in the least.  Nor does it make it a “campaign document” in some dismissive sense.

In fact, it’s another example of the starkly different visions of the two sides right now—the YOYOs (you’re-on-your-own) and the WITTs (we’re-in-this-together).

The former, led by Wisconsin Republican Paul Ryan, will soon announce their own budget, replete with much deeper spending cuts and no new revenues.  In fact, cuts to programs for the poor will pay for the tax cuts for the wealthy.  The WITTs take the approach described above, balancing stimulus and deficit reduction, tax increases and spending cuts, along with some attention to the fact that this economy has yet to achieve escape velocity from the great recession and needs yet another jolt from the fiscal booster rockets.

Such differences matter a great deal.  Anyone who tells you otherwise is either a dangerous cynic or someone wants you to look over there while they steal your government.

Jared Bernstein is a senior fellow at the Center on Budget and    Policy Priorities. From 2009 to 2011, he was the Chief Economist and    Economic Adviser to Vice President Joe Biden, executive director of the White House Task Force on the Middle Class, and a member of President Obama’s economic team.

Also by Jared Bernstein
• The Economy: What’s Wrong and How to Fix It
• How to Build a Fairer Economy
• What Obama’s State of the Union Got Right
• Jobs Report: Good News, but a Long Way to Go
• Why It’s (Almost) Time to Raise the Minimum Wage