Earlier this week, I announced a contest in which readers were asked to mimic the extraordinary graph concept introduced in Thomas Friedman’s new book, Thank You for Being Late.

For two decades now, Friedman has been writing what Gawker once called his “only column,” i.e. technology is advancing at speeds beyond humanity’s ability to adapt. Friedman’s extraordinary career has essentially been one long exercise in finding new ways to express and re-express that one phrase (see here).

In Thank You for Being Late, Friedman finally expressed the idea in visual form, in a pair of graphs. The first plots against X and Y axes of indeterminate value where “we are” in history versus where “human adaptability” is headed: 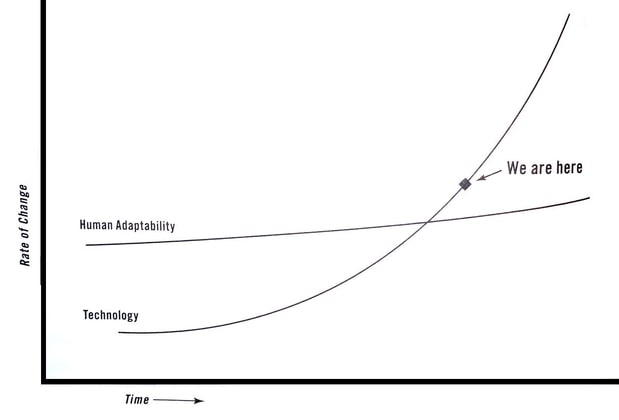 The second explains that the solution to our problem is to just move the adaptability line up to meet the “We are here” data point: 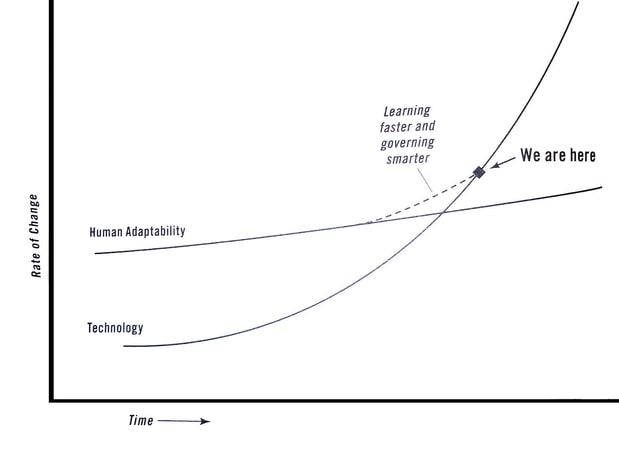 As noted earlier this week, Friedman’s “solution” graph appeared to involve time travel, but this was the least of its problems. As Matt Novak at Gizmodo wrote:

Without further ado, here are the winners, and below those, a selection of some other notable entrants in a long list. I wish I had enough room for all of them. Thanks to everyone for participating:

Clevenger’s excellent graph is self-explanatory. Some others followed him with the same idea, but he was first and also nailed the aesthetic:

Snider’s “Future as all variables” graph was as simple and elegant in its design as a sundial and was a leader among the pure nonsense entrants:

Another Canadian! And you can tell Gordon is Canadian because he apologized for it after sending me his address. “PS, I won’t be offended if my Canadianness disqualifies me,” he wrote.

Gordon is a controversial choice, because his graph definitely makes sense, but honestly I just couldn’t not give the guy a shirt because a) the idea is funny and b) it must have taken forever. His concept is a “best Friedman book title anagrams,” which included the correct conclusion that the best of all was “Untitled Gas Station Dude,” the better form of Longitudes and Attitudes:

Ohioan Hinshaw graphed space versus time versus “Whether Foucault’s pendulum is swinging north or south,” with a gyroscopic “space-time anomaly” and “toast” as data points:

Some of the best of the rest:

@fififerenghi, “Speed of Rolling Donut vs. Number of Attempts at Airborn Copulation With Donut (United States)”

#friedmangraphs “As the pace of change accelerated,people began to ignore time honored traditions and the advice of Elders.” @mtaibbi pic.twitter.com/ObcG3x51zw

@bosco_hoggins “Use of the term ‘Innovation’ vs. Understanding of Technology as determined by Self Regard”

@mtaibbi #friedmangraphs Probably more effort than you were looking for pic.twitter.com/sX2MFeVET0

Note: I love the fact that “Brother-in-law after watching The Social Network” is higher on the graph than “TED talk.” Inspired.

@jalaska13, “Number of Middle Eastern Dictators Toppled Per Month, before and after Google kills its Google Friend Connect product”

This controversial entrant was considered too accurate by some.

@vulturechow, “Quality of Thomas Friedman’s Book vs. Likelihood that my father will give me the book for Hannukah”

This was one of my favorites and a near-winner.

@lev688323, “Down vs. Probability of an NFL announcer saying, ‘They’re gonna want to go for a first down here”

These two football-related graphs came in at nearly the same time and are somehow funnier together.

@fritzlodge, “Should America do X?”

Another set of graphs that are funnier together. Not sure how I feel about realizing I wasn’t too old to laugh at either.

@hathead82, “A Person’s Insight vs. Extent to Which They Are A Cab Driver”

And finally, the aesthetically pleasing dismount:

@fitelson, “Amount of Relish, per ounce, vs. Degree of Nonsense, now and then, relished by the wisest men, vs. Frequency of Relish”

here’s a contribution to #friedmangraphs (from Danny Brown — a friend without a twitter acct). pic.twitter.com/koxFEv9LGL

By my old friend Eric Salzman, who didn’t submit a graph, but this video of the old Monty Python “Spectrum – Talking About Things” skit, which is a blast from the past and perfectly in the spirit of the contest.